The Yazidi religion  is a syncretism of Zoroastrian, Manichaean, Jewish, Nestorian Christian and Islamic elements. The Yazidi themselves are thought to be descended from supporters of the Umayyad Caliph Yazid 1.

They themselves believe that they are created quite separately from the rest of mankind, not even being descended from Adam. They have kept themselves strictly segregated from the people among whom they live.

Although scattered and probably numbering fewer than 100,000, (some say as low as 50K) they have a well-organized society, with a chief shaykh as the supreme religious head and an amir, or prince, as the secular head.

The chief divine figure of the Yazidi is Malak Taus (“Peacock Angel”), worshipped in the form of a peacock. He rules the universe with six other angels, but all seven are subordinate to the supreme God, who has had no direct interest in the universe since he created it.

The seven angels are worshipped by the Yazidi in the form of seven bronze or iron peacock figures called sanjaq, the largest of which weighs nearly 700 pounds.

Yazidi are anti-dualists. They deny the existence of evil and therefore also reject sin, the Devil, and Hell. The breaking of divine laws is expiated by way of metempsychosis, or transmigration of souls, which allows for progressive purification of the spirit.

The Yazidi relate that when the devil (which they call “Melek Taus” or “Malik Taus” or, alternatively, “good devil”. The usual, such as “prince of darkness”, Satan, Shaitan, or “lord of the evening” is also OK) repented of his sin of pride before God, he was forgiven. He then returned to his position as chief of the angels.

This myth has earned the Yazidi an undeserved reputation as devil worshippers, since for them God has basically handled the controls of the universe to the Devil.

The Yazidi religious centre and object of the annual pilgrimage is the tomb of Shaykh ’Adi. This saint was a 11th century Muslim mystic, believed to have achieved divinity through metempsychosis. It is located at a former Christian monastery in the town of Ash-Shaykh ’Adi, north of Mosul.

Many Yazidis consider themselves to be ethnically Kurdish, although some would define themselves as both religiously and ethnically distinct from Muslim Kurds. However, the Baath Government arbitrarily classified the Yazidis as Arabs. Yazidis predominately reside in the north of Iraq.

There is evidence that the Baath government in the past compelled Yazidis to join in domestic military action against Muslim Kurds. The Baath Government also targeted the Yazidis in the past – but the Baath decades seem to have been relatively quiet for most Yazidi, since the secular regime stopped persecutions they suffered from due to their worship of the Devil.

However, once the Baath regime was brought down by the US invasion, persecution resumed. This became particularly awful with the rise of the Islamic State in the region.

Small populations of refugees Yazidi exist outside of their historic places in Iraq in Syria. These are mostly found in Germany (the biggest community outside of Middle-East), the UK and the US.

King Peacock is a badass martial artist, in formidable physical shape. He also is an excellent athlete, really tall and muscular.

Furthermore he’s an unusually competent detective, a smart and very stable man, and has a rich and satisfying religious life.

He talks directly to the Devil – who according to his faith now oversees the Creation since he came back to the fold some time after the Fall. The good devil is everything, he is all matter. And since Corbeau can talk to Melek Taus, he can talk to all matter. This ability makes him an unique detective (in DCH terms Postcognition, Speak with matter).

When force is required, King Peacock asks matter how to destroy it. This allows him to strike at the weak points of objects. This ability is impressive. He could :

If he wants to be careful in the application of force, he will discuss with the devil inside all matter for a few Phases. But if he needs to break stuff right now, he will.

Since he and his wife seem of African (not Khurdish) descent, and he has a French name, his family presumably has an interesting history. Unless the Yazidi faith in his world takes converts (I don’t think they do in the real world).

Corbeau is a smart, articulate, very polite intellectual. He is calm, a bit formal, and very confidant without seeming arrogant.

He doesn’t talk much about his faith (and of course doesn’t proselitize), but is very open with religious references and often praises Melek Taus.

His marriage seems to be an happy one, and he obviously loves his kids. The whole family is fervently Yazidi. Although he’s respectful and loving toward his wife, they follow customs that seem antiquated at best – for instance his wife and children must walk several steps behind him when they are in public.

King Peacock doesn’t like violence. When he was caught in lethal arena combat on Grand Central, he kept politely requesting to be removed from the fights as there was an error and he didn’t intend to fight anyone, especially not cops and certainly not to the death.

Once forced into combat and despite his reluctance, he dispatched his opponents with staggering ease, finding the whole thing ridiculous and offensive.

Moore apparently bases some of Corbeau’s outlook on early explorer reports of the Yazidi, who found them to be “of great morality, property and rectitude”.

Bonuses and Limitations:
Sharpness is ineffective against living matter (-2).

Like most Top Ten characters, Corbeau is hard to gauge due to lack of comparison points. 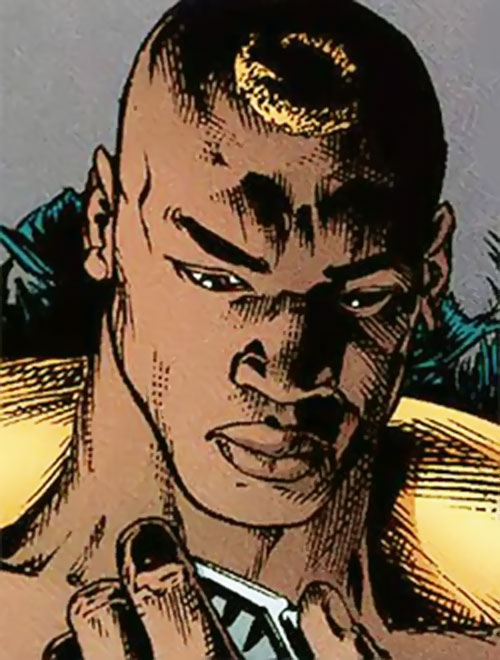 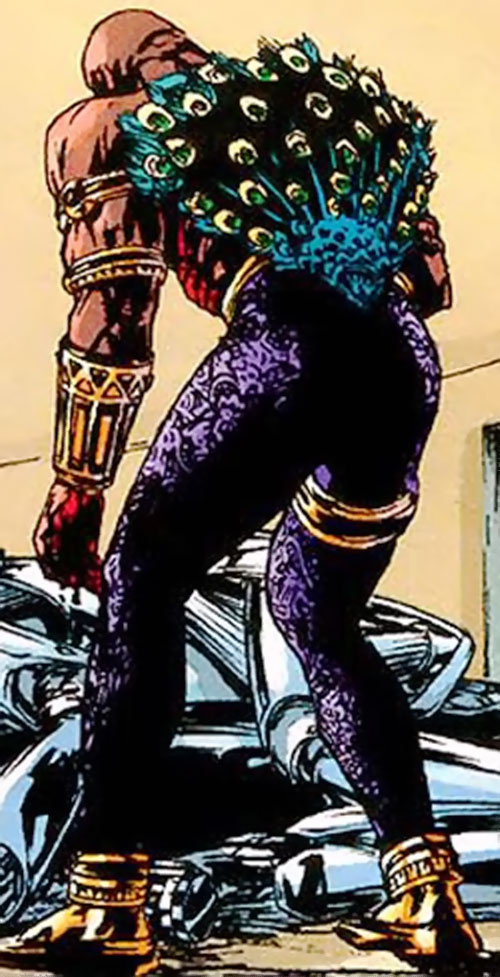