King Randor is the benevolent ruler of Eternia.

He also is the father of Prince Adam (aka He-man) in the 1983/1984 Filmation cartoon series He-man and the Masters of the Universe.

If you know little about Eternia, you probably should read our article about the Masters of the Universe setting first.

King Randor is a ruler and diplomat first. He barters for peace with weaker Kingdoms, making allies of them.

In a fight, Randor prefers getting up close with melee weapons. A sword or mace will do. But being King means others do the fighting for him. 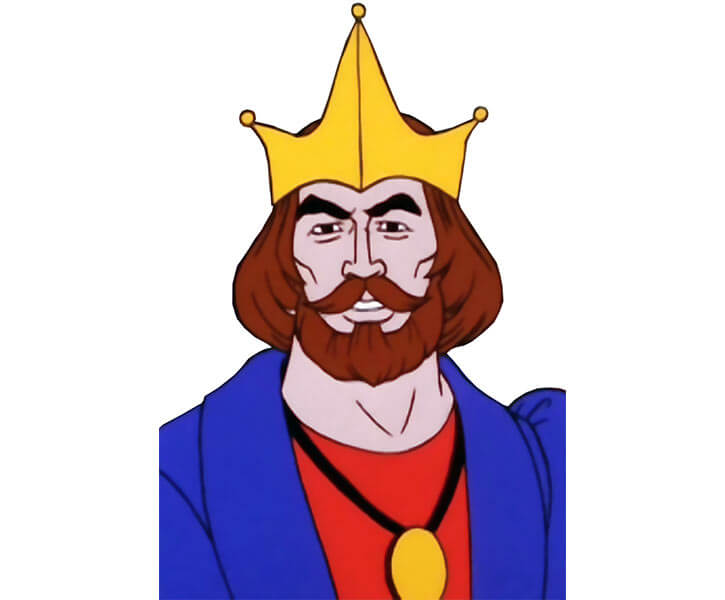 King Randor’s Captain of the guard is Teela, one of the finest warriors in the kingdom. She trains his Royal Guard.

Man-At-Arms is a trusted advisor. The King trusts him with his life and the lives of his loved ones.

Orko, the Court magician, also houses at the Royal Palace.

Outside of these notable heroes, there are many warriors to give support, including He-man! 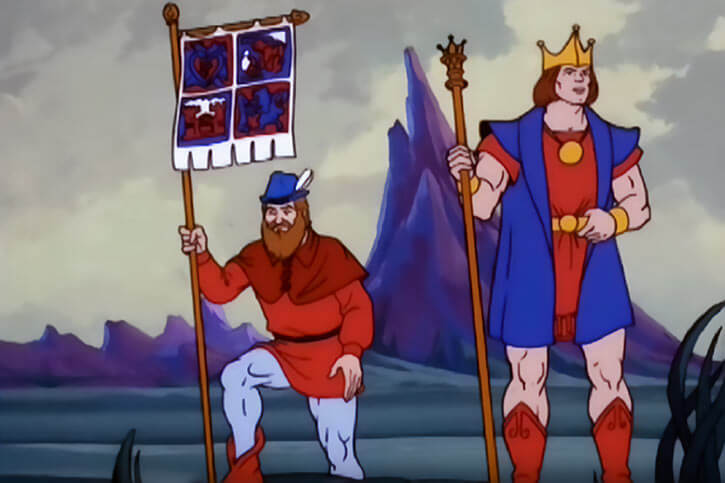 Portrait of the King as a young man, I guess.

Randor became King as the only heir when his father went missing. King Miro was lost in a battle with his nemesis the Enchantress (no relation).

King Randor found Marlena after she rocketed down from the sky. Captivated by her beauty, he fell in love at first sight.

They married and Marlena soon gave birth to fraternal twins – Adam and Adora.

Hordak led an assault on Eternia. The attack ultimately failed but he was able to escape with the Princess, Adora. His apprentice Skeletor was left behind on Eternia.

Skeletor established a persistent threat in Eternia against the Royal Palace. Thankfully, a hero appeared to combat this threat – He-man.

Randor wears red and blue with yellow accents. Plus of course a kingly crown.

King Randor has all the equipment and weapons of the Palace at his disposal. But he almost never uses any of them. They certainly wouldn’t be considered standard equipment. On a rare occasion, he carries a sword similar to Teela’s, or a mace. 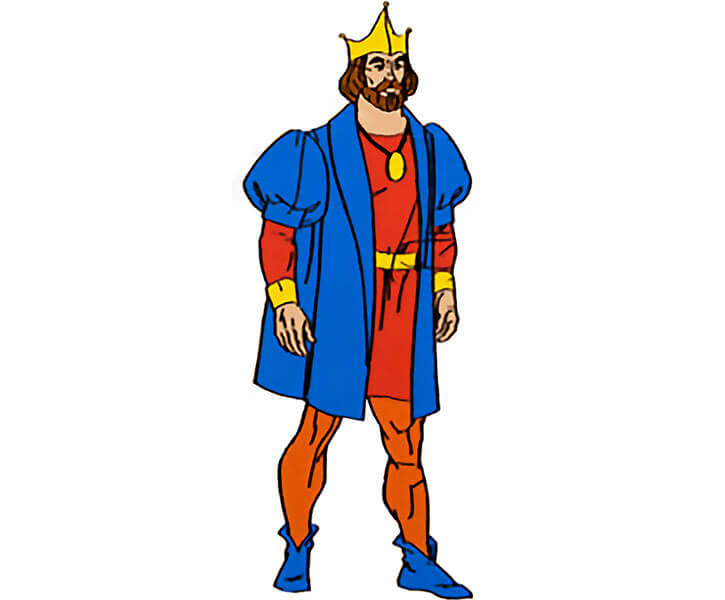 He’s vital and strong but understands that’s not what makes a king.

Randor is proud of his son, Adam, for his honest character and kindness. But he wants the lad to be more serious and responsible. To show initiative, as Adam will be King one day.

Although serious-minded, he still laughs at a good joke (or a bad one). 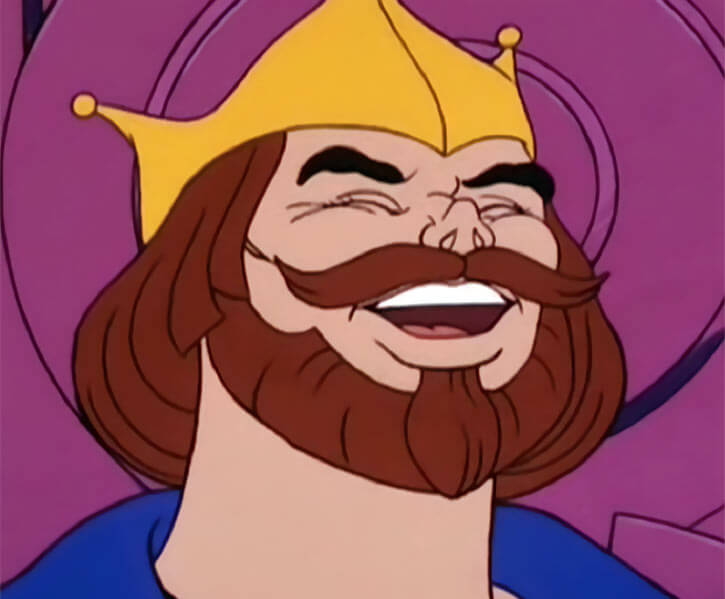 “Really son, such conduct is not worthy of a future king.”

“I haven’t fought like that since I was a boy. Nice to know I still have the old left hook.”

Sorceress Cybaline: “Your majesties, I thank you both for seeing me. You’ve shown great trust in opening your doors to one who once opposed you.”
King Randor: “Our goal is for a united and peaceful universe. We first must start with Eternia.”
Queen Marlena: “And you are welcome here.”

“Slavery is a terrible thing.”

He-man: “You’d better let me handle this sire.”
King Randor: “What ? And miss a good scrap ! I never told Adam or Man-At-Arms, but I used to be quite a rowdy in my youth.”

“The problems of ruling a kingdom seem less with Orko here to make me laugh.”

King Tamusk: “Now we will do battle, Randor, to prove which one of us is the true King of Eternia !”
King Randor: “No Tamusk, in your day battle may have been the test of a King; but now it is wisdom, compassion, and reason that rule Eternia. Fighting proves nothing !”

“Trying to do something good is never an excuse for doing something wrong.”

(Adora returned to the King and Queen to know her parents for the first time).
“The Royal family is whole once more and by the ancients, I swear that nothing shall ever separate us again.”

The entire Master of the Universe setting could be inserted into the DCU. Eternia would be another planet in the vast cosmos.

It would be interesting to see Randor interacting with the likes of the Thanagarians, the Green Lantern Corps, or Apokolips. 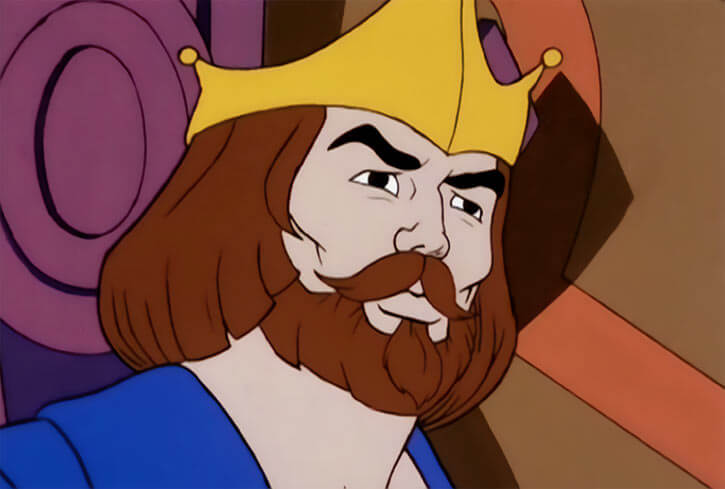 I wanted to highlight the King’s “good left hook”. So, I gave him the Edge Advantage. This way, he can surprise an opponent with a strong punch at least once during a scrap.

Helper(s): Wikipedia, He-man and She-Ra a complete guide to the classic animated adventures.