Hard to say, really. Klamos appeared to be a tough robot with a powerful optic blast. Grok was able to teleport away in a cloud of fire.

Their interstellar army seems to have very powerful spaceships. They could turn the sun red with but a blast of a make-the-sun-red beam weapon. A small fleet was reportedly powerful enough to blow the Earth up. They could scan the thoughts of people from orbit – that’s how they learned of the vulnerabilities of our two heroines.

The space Tyrant Klamos, flanked by his faithful vizier Grok, conquered an entire galaxy. As they annexed solar systems, the ranks of their armies became innumerable. Finally, the last planet fell.

Klamos then had a variety of women abducted from other galaxies. He pit them in a giant arena fight ; the winner would be his queen. Scouts reached the Earth, and decided to kidnap Supergirl (by briefly turning the sun red) and Wonder Woman (by tricking her into accepting a gift necklace that constricted around her wrists as she held it). 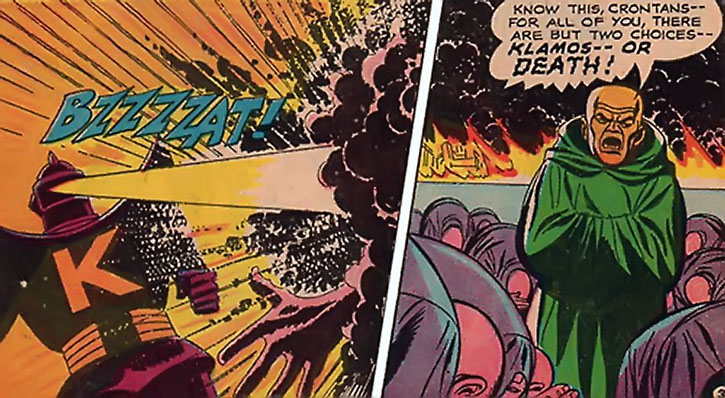 Although Wonder Woman and Supergirl had planned to play possum and go home safely, they found themselves the last women standing in the arena. They refused to fight, but Klamos threatened to destroy the Earth to force their hand.

When the day of the big fight came, WW and SG, having realized (like *every* reader) that Klamos was a robot controlled by Grok, maneuvered to get close to Grok. Supergirl then used her superspeed to bollix the remote controller on Grok’s wrist, making Klamos explode (d‘oh). Grok teleported away while uttering vague threats.

Presumably, the Klamos empire then collapsed.

Klamos : “Finally ! The two most powerful women of any galaxy !Now—- now you two will battle — the winner to rule with me as my queen !” 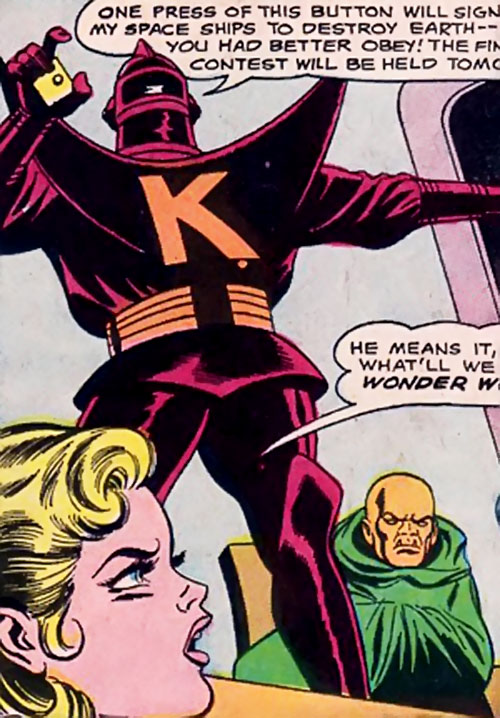