I haven’t re-read it in yonks, but I quite liked it back then. It had good atmosphere and something of an X-Files meets Dark Tower vibe. Well, retroactively since X-Files didn’t exist yet.

These here old notes are based on St George #1-8, and does not include the events in Critical Mass.

Devlin is unusually proficient in street fighting techniques. He follows a strict regimen of training as an amateur boxer.

He’s also a good, compassionate Roman Catholic priest and a man used to the hardships of combat.

The armor enhances his physical abilities, notably his strength, to low superhuman levels. It also has a protective role. The “lance” can be used as a blunt weapon or to project energy blasts.

The armor possesses a host of “magical” powers. These must have a connection to the Roman Catholic mythology, or the legends of St. George. Feats have included triggering a heavy rain from a clear sky (symbolizing the baptism for the rebirth of a newly purged town), and summoning and controlling a nearby horse (St. George is the patron of horsemen).

The armor can only be used for actions based on a clear cut distinction between good and evil. It must not be morally ambiguous, but clearly the action of good to oppose evil. However, this distinction is more a matter of perception than cosmic intangibles. A person trained in theology and having conditioned itself properly has an easier time justifying his actions as good.

The world of the Shadowline is pretty much the normal world, although a bit darker and grimmer. The main difference is the presence of “Shadows”. This is a race a supernatural being with superhuman powers. More powerful, but far, far fewer than the humans, the Shadows went into hiding. Sometimes heroes, often monsters.

By the end of the XXth century, however, the Earth has gotten too small. The frictions between humans and Shadows escalated. Then the most powerful Shadow of all went public as that world’s first “super-hero”, Doctor Zero.

I can see by the look in your eyes

However, there existed in Greece an order of Shadows. These carried on the Mythos of St. George to battle “the dragon of injustice”.

The ”monks” believed in a variety of religions, but lived the life of medieval Christian Monks. For years, the Order of St George had selected and outfitted a warrior, the Knight of St. George, whose task was to battle injustice. Often meaning Shadow plots, as their power gave them a greater capacity for injustice.

The ultimate goal of the Order was to terminate the greatest Shadow, to their eyes the incarnation of the dragon of injustice, Doctor Zero.

Those who came before

Three Knights are known of. The first was a Buddhist Korean named Jeong Lee. Although he performed admirably, he grew during his stint as Knight. Growth became doubt and doubt led to destruction. Facing the Dragon in 1983, he couldn’t muster enough faith to battle the ultimate evil, who let him live.

He gave the armor back to the Order and started fighting injustice as a simple human adventurer.

The next Knight was a crusading journalist called Kara Janisary. She fell into the opposite trap, becoming far too self-righteous. Unlike the humble Lee, she became heady with the power of the armor. Janissary found herself more and more tempted to use it to solve every problem with brutal, self-righteous force.

A fellow journalist, Patty Richardson, saw Kara brutally kill British soldiers and IRA terrorists during a shootout in a pub to prevent them from harming innocents. Some times later Ms. Janissary died fighting Doctor Zero. Though her impure faith was still enough to hurt him, it also drove her to kill Jeong Lee as a failure just before the fight.

The third known Knight, Michael Devlin, was a Roman Catholic priest with a peculiar past. A militant priest whose father was a sheriff in a small town, Devlin was all about helping the innocent and stopping injustice from day one.

He did mission work in Nicaragua, which went ugly. The American priest got caught in the struggle between Sandinistas and Contras , who both wanted to use him as a propaganda tool.

Rescued in the nick of time by American special forces with pretty much the same agenda, he fell from the chopper during the extraction attempt. Devlin survived by killing the Sandinista soldiers after him.

This event and the killing he did had a strong effect on him. Michael was haunted by flashbacks and a feeling of impotence in the face of the world’s injustice. This led him into a boxing training regimen. He even acted as an occasional vigilante when street fights or muggings flared near his church.

Gnawed by doubts as to whether he had chosen the right life by being a priest, he was a perfect candidate for the order of St. George. Thus, he left the priesthood to don the armor.

Devlin is, most of all, a good man concerned with nurturing the innocent, helping build a happy community and fighting injustice. Although he’s been released from his vows, he’s still very much a priest.

However, his experiences in Central America made him cynical, disillusioned. And the horrors of the inner city in which he was a priest drove him further from the Church and to the Order. Of course, he had trouble accepting that evolution within him, wanting to remain a good, normal priest.

Although a nice and amiable man, Devlin became more and more sullen and warrior-like as he wore the armor, just like Kara did before him.

“Give up hope, and the darkness comes crashing down. Lose that precious hold, and start believing you’re all alone…”

“Hope ; that the Lord will be with me, not outside – but inside. Lending his might. Faith ; that He will show me the way. Courage ; that He will give me the strength to use it. Wisdom ; to recognize it when the time is right.”

The Knight of St. George would be a good way to explain why many of those immortal villains, such as Vandal Savage, never took control of the whole world.

If you add the Knight to your campaign, it will be interesting to choose who they consider to be the ultimate evil.

Another DCU hook might be a conflict between the Knight and the Order of St. Dumas’ Azrael.

Bonuses and Limitations:
Medicine (medical treatment) only to treat SPI, not BOD or MIN (-1). 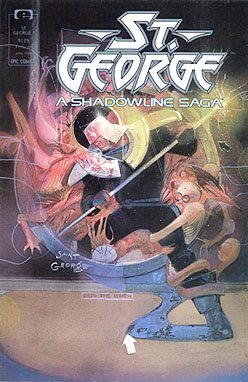