Knockabout was part of a team of super-agents for S.H.I.E.L.D.. These guys weren’t too bad, and had some potential (including as a Player Characters  team). They appeared in 1992/93 Nick Fury, agent of S.H.I.E.L.D. issues.

However, the book was then cancelled, with a “burn everything and leave nothing but ashes” approach to its characters and story beats.

Knockabout is a giant of a man, possessed with superhuman strength and durability. He’s also pretty fast and a solid brawler.

He has explained that his power derived from the Australian dreamtime. But this is almost certainly a fib.

Secondary sources  stated that Knockabout derives his superhuman size and power from having people believe (or at least have doubts about the possible veracity) of tall tales he keeps telling. These are mostly about his past adventures… but sometimes they’re about how his powers work.

Apparently, Knockabout has to keep lying about his tales and tell tall tales to retain his superhuman size and power. That makes a biography difficult. Furthermore, S.H.I.E.L.D. never managed to properly analyse his powers. And of course they never managed to get a straight answer out of him. 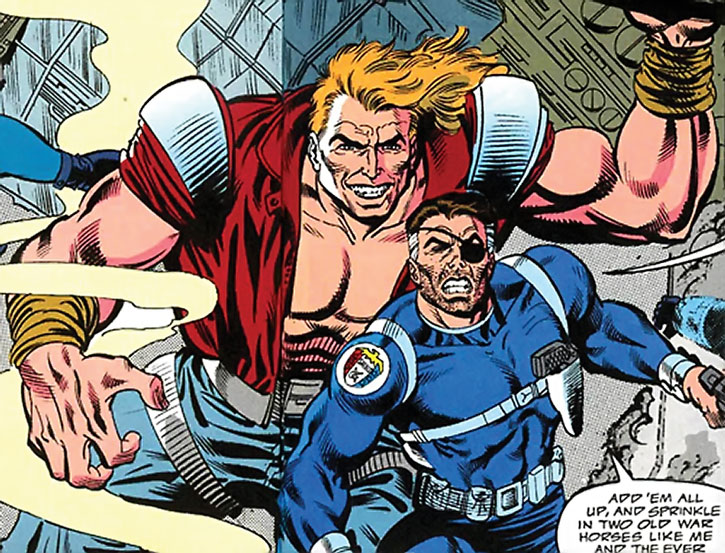 Despite this issue, senior S.H.I.E.L.D. officer G.W. Bridge eventually decided to recruit Knockabout for his Super-Agents project. He would the brick  of the team. He took part in several missions with the young Super-Agents, and accompanied Nick Fury in the field for high-stake missions.

This volume of Nick Fury ended weirdly. Suddenly in the last few issues most of the new characters turn traitor and/or die. Knockabout was revealed to be an infiltrated Hydra agent, and helped Violence killed their comrade Ivory when she realised they were traitors.

Through a deus ex machina S.H.I.E.L.D. suddenly returned to the status quo from before the Deltite conspiracy, with tons of old characters coming back from the dead.

Knockabout insists on being bare-chested and ill-shaven in all circumstances.

An Australian native, Knockabout is jovial, friendly, outgoing, and quite boisterous. This is all part and parcel of his power, allowing his loquaciousness to fuel his enhanced abilities. But he has been telling so many stories for so long even he is sure where the lies end and the truth begins.

He likes to brawl. Though he leaps into fights without any strategy, he’s pretty good at it. A favourite “tactic” is to use big things on the scene, such as cars, as weapons.

Knockabout is not into complex analyses and cunning plans. And he will spontaneously admit he’s not very good at making decisions. He’s happy following the lead of his comrades.

If Knockabout is to appear in a session, it is best to keep number of stories and anecdotes on hand, ready to toss them out whenever there’s a lull in conversation, role-playing, or action. Knockabout should always be quick with a joke or story, preferably with ties to the Australian outback.

(After being trapped in flaming gasoline) “Somebody want to toss me a shrimp  while I’m still on the barbie ?”

“This has it all over chasing poachers up and down the outback ! Though there was that time…”

“You’re no doubt pondering, ‘Just exactly what does a super-agent do ?’. I can only speak for myself, but I do *this* often.” (smashes into opponents)

Drawbacks:
SIA toward telling tall tales and lying about himself, Partial Attack Vulnerability (-1 CS RV against blows to the testicles), Secret ID (he has to lie about his past and cover his tracks).

Equipment:
I would assume he had a S.H.I.E.L.D. communicator [BODY 02, Radio coms: 05] somewhere on his person – perhaps in his belt buckle.

I’ve also pulled a size out of my arse, since his size was so incoherent during his appearances.

Secondary sources (the Dragon Magazine article) explain something I did not see in the source material. The part about Knockabout deriving power from tall tales.

This is a Gradual Loss Vulnerability to his DEX, STR, BODY and Growth. Howbeit, his Physical Attributes cannot go below 03 (and his size below 6’6”). The Vulnerability gets triggered if he doesn’t get to tell one weird anecdote or tall tale per day (and have it believed to even a very small extend).

Conceivably he could get more powerful as more people started believing or half-believing his porky pies . 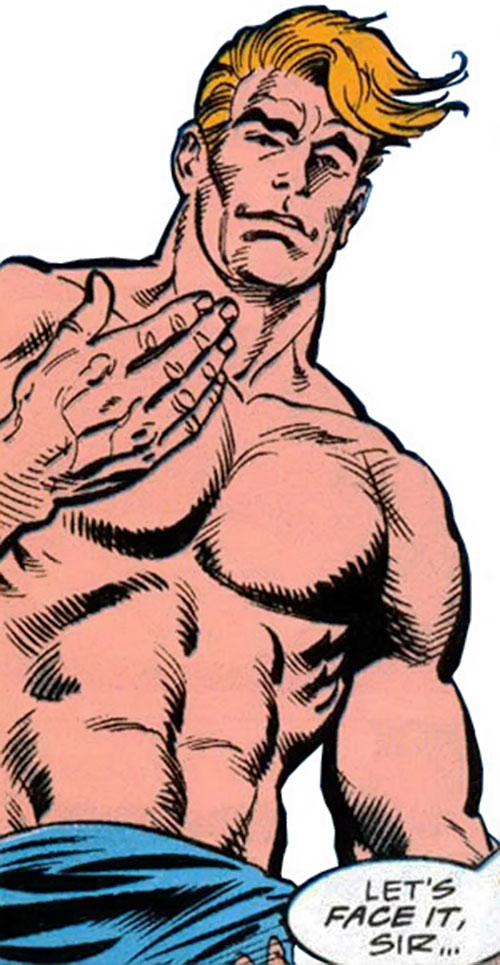