Kobra Khan is one of the earliest and coolest snake-men introduced in the 2nd season of the 1983-1985 Masters of the Universe TV series.

He is another of Skeletor’s henchmen.

His name is presumably a reference to the king cobra (ophiophagus hannah), “Khan” being translatable as “king”. Kobra Khan also reportedly references Kubla Khan  , a famous Mongolian warlord during the 13th century.

For more context, checkout Skeletor’s character profile or the article about their base, Snake Mountain.

Kobra Khan’s arms can elongate to constrict enemies. He usually entangles them long enough to deliver his sleep venom.

Kobra Khan’s powerful sleep-inducing mist shoots from the folds of his hood. Anyone breathing this mist falls unconscious within seconds. Including Kobra Khan, who isn’t immune to his own venom.

On rare occasions, he was seen shooting energy beams from his eyes.

Kobra is good at infiltration. 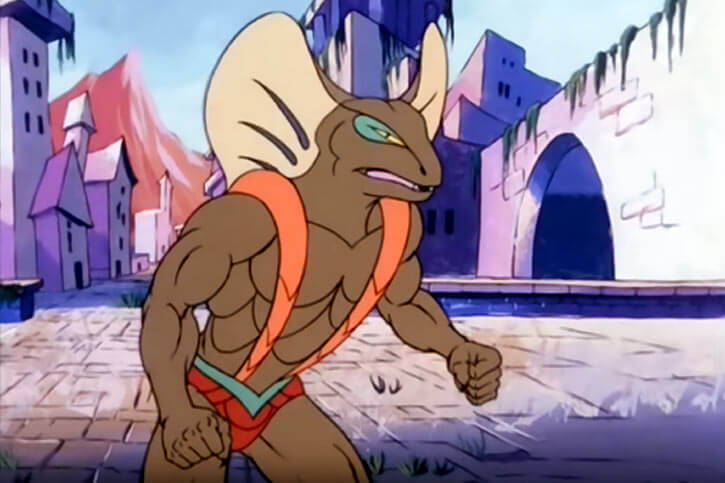 Skeletor brought in new recruits to combat the growing number of heroic warriors.

Kobra Khan was among them.

Kobra Khan is a member of the Repton race. Their ruler is King Pythos. Their city has an Ancient Egyptian style with plenty of snake motifs. They live deep below the ground under a pyramid.

It’s much colder below ground but an “Eternal flame” keeps them from freezing. Without it, they will hibernate and never awaken. The heat source is the lava stream 100′ below their flame.

The Reptons are a peaceful race. Only Kobra Khan is different, and his people see him as a traitor. Still, there are traps around their home to slow down intruders.

Kobra Khan drove the Land Shark to the Royal Palace and asked for He-man’s help. The Repton’s Eternal flame had gone out, dooming them.

Even so, once inside the pyramid, Kobra Khan distanced himself from the group. Then disappeared altogether.

He-man, Man-At-Arms, and Orko arrived at the Eternal Flame and verified that it was out cold.

A contingent of Repton guards arrived. They accused He-man and the others of putting out the flame. Their rebuttal fell on deaf ears since there was a witness to their crime. Kobra Khan! 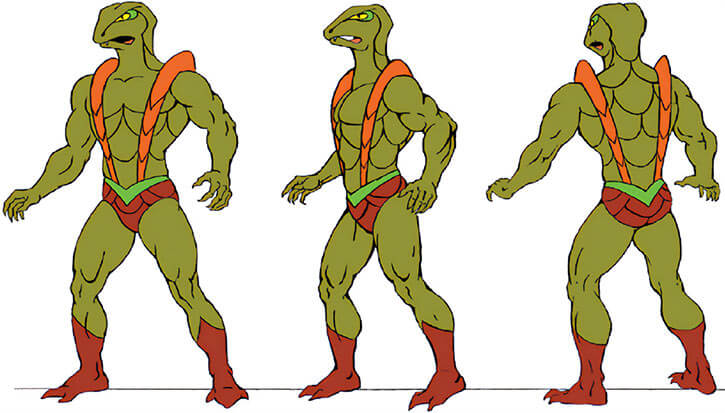 He-man and friends were taken away to the dungeons.

Kobra Khan made a bargain with King Pythos. He would re-ignite the eternal flame and in exchange, he would be king of the Reptons. King Pythos agreed as the alternative was the Reptons’ death.

Kobra Khan simply removed the ice crystal he himself had put in to douse the flame. But that didn’t work. The crystal had put out the flame permanently.

Scales, the court jester, had grown suspicious and followed him, revealing the entire plot.

A hot time in the old town

Scales released He-man from his prison cell and took him to the Eternal Flame. He-man drilled down and released the lava once more.

Kobra Khan revealed himself and tried to take credit for the flame. But King Pythos wasn’t fooled.

Kobra Khan’s punishment for as long as he lives with the Reptons is to “make people happy”. He is being taught the way of the jester by Scales.

A fit and muscular half-man, half-cobra person. With a full cobra head including the hood.

He wears brown shorts and boots.

He is occasionally depicted as brown-skinned instead of green, as in the episodes, “Fraidy Cat” and “Journey to Stone City”. 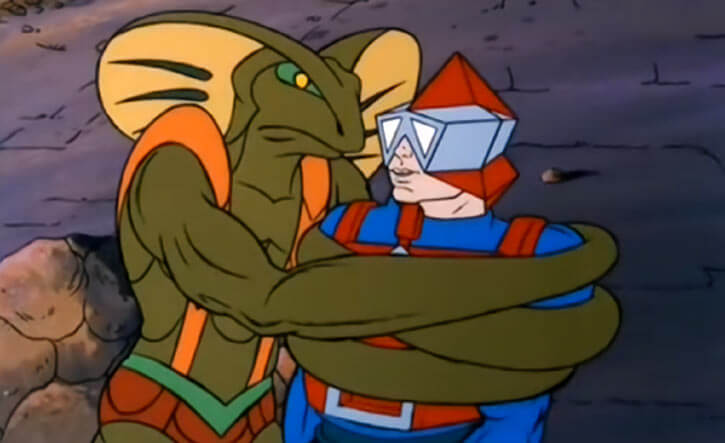 Kobra Khan speaks out of the side of his mouth. When he gets to an “s” in a sentence he hisses, drawing out the “s” sound.

Portrayed as dark and serious, Kobra Khan is confident in his abilities. He will use force to solve problems more often than not. Intimidation and fighting are his first options.

On a mission to the Royal Palace, Kobra Khan was supposed to use a powerful sleep pellet. Throwing it in the King’s throne room so he could make his escape. Orko uncovered his disguise, Kobra Khan angrily attacked with his venom mist and completely forgot about the pellet.

As a Skeletor agent, Kobra Khan is usually paired with Webstor. 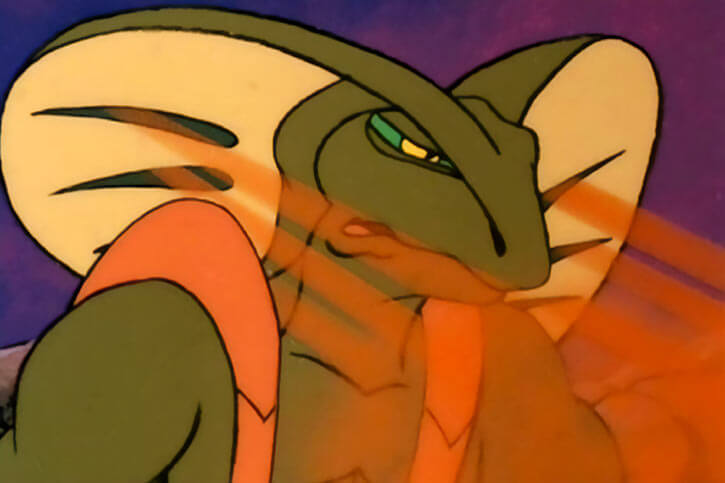 He-man: “Mekaneck, Buzz-Off, are you all right ?”
Mekaneck: “I guess so, Kobra Khan is pretty powerful.”

“Let’s see how they like my mist of sleepiness, hehehe.”

Skeletor: “That’s it, we’ll steal the Sceptor of Power. But how ?”
Evil-Lyn: “I have a plan. I can cast a spell to make one of them look like a citizen of Eternos. Once inside the Palace he is to steal the Sceptor of Power.”
(Kobra Khan, Beast-Man, and Trapjaw stepped forward)
Skeletor: “Yes, yes, eh, it’s risky. We’ll need someone expendable. Someone we can do without in case he’s captured.”
Beast-Man: “Not me, not me. I… uh… I’m not feeling very well today.”
Trapjaw: “Me too.”
Kobra Khan: “Cowardssss. I’ll do it SSSSSkeletor. It’ll be a pleassssure.”

Orko: “Kobra Khan ! You snake !”
Kobra Khan: “Flattery will get you nowhere.”

“No one talks to Kobra Khan like that ! Have some sleep venom !”

Kobra Khan would be a good addition to any snake-themed villainous team, such as the Serpent Squad or Serpent Society. Or to Strike Force Kobra.

He could fit in anywhere there’s serpent people, which means a *lot* of settings. From King Hull’s serpent men to Everquest’s Shissar.

The Ancient Egyptian and animal aspect could be used to make him into an enemy of Hawkman or the Silver Scarab.

Skeletor calls him “The evil master of snakes” (TV special, “Skeletor’s Revenge”). This is also the blurb on the box of his action figure. Still, he never commands or controls snakes in the series.