If you are not well familiar with 1980s Power Pack, you should first read our Power Pack team profile for context.

Kofi has the superhuman ability to teleport himself – and an unknown amount of extra mass which he is in contact with.

Initially, Kofi could traverse a few feet in a single jump. With experience, he learned to teleport much longer distances.

The longest distance he covered in a single jump was from orbit above Snarkworld to its surface. He made that jump with Franklin Richards and the Snark Emperor in tow. 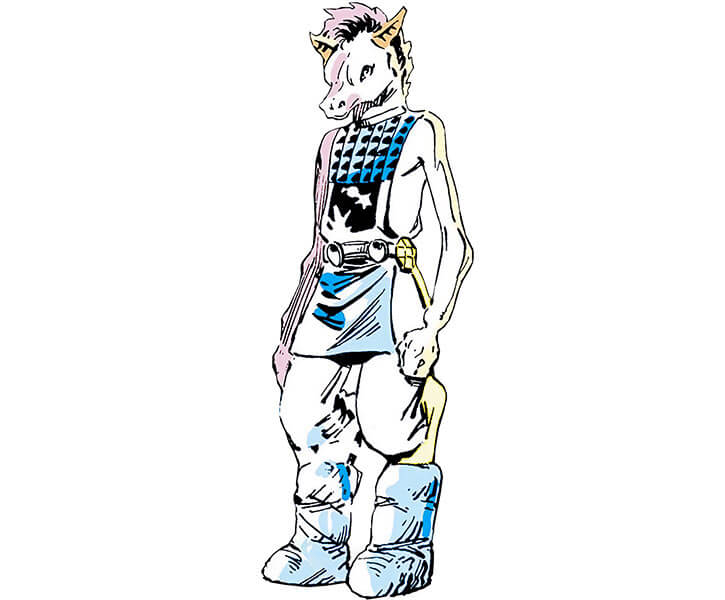 (A general history of the Power Pack can be found in the Team’s own WORG entry).

There came a time when Bhadsha, the Snark Emperor, was dying. His various Queens plotted to take the throne.

To prevent the region from falling to war, Kofi’s father Yrik Whitemane attempted to broker a peace. He travelled to “Snark World” with his son in tow.

The two Kymellians’ relationship had become strained over the years. Kofi felt that his father cared little about him. And Yrik could not relate to his son after his wife’s death.

Rather than bonding over their grief, the two often left each other to their own devices. It was for this reason that Kofi decided to explore Snark World on his own.

While exploring, Kofi discovered that Queen Maraud had sent her son Jakal to capture the Power Pack. As Kofi was the younger cousin of Aelfyre “Whitey” Whitemane, he felt a kinship with the Power children. He couldn’t allow them to come to harm. 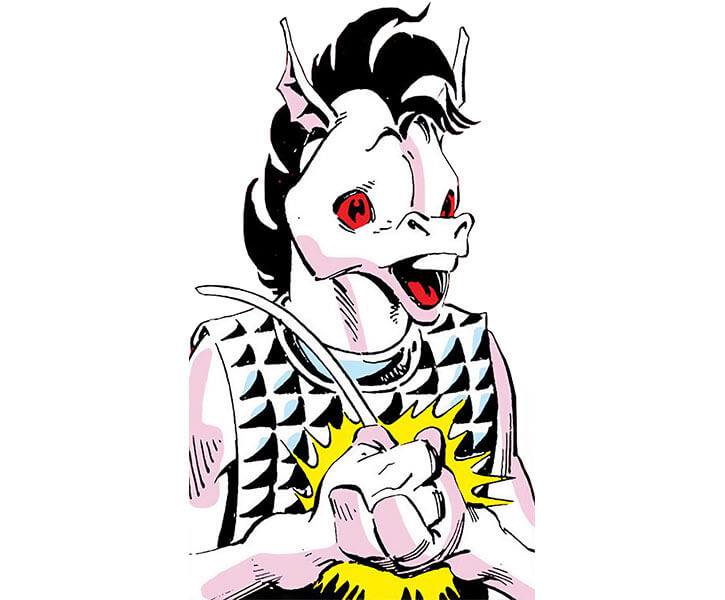 Knowing that his father would council patience and debate, Kofi acted on his own. He stole Data, his father’s Smartship, and traveled to the Earth to warn the Powers.

Though Data perished en route, Kofi beat Jakal to Earth. Thanks to him, the Power Pack defeated Jakal (with Franklin Richards’ help).

Unfortunately, Data’s destruction stranded Kofi on Earth. The Powers’ took him in and kept his existence a secret from their parents.

He lived with them for weeks until their Smartship, Friday, was capable of returning Kofi home.

After wishing Friday farewell, Kofi allowed himself to be taken to his father. Unfortunately, Maraud had Kofi ambushed and captured.

To his shock, he discovered that she had already taken his father prisoner as well. Maraud had taken Yrik captive to prevent him from using his gift of healing. She feared that he would extend Bhadsha’s life.

The two Kymellians were prisoners for days before Power Pack joined them. Maraud had sent another group of Snarks to the Earth which captured the Pack, and retrieved Jakal (who had been entombed in the Antarctic by the Powers).

She then used her advanced science to :

But despite her genius, Maraud made a fatal mistake. She under-estimated the destructive potential of the Power children. The kids broke free and rampaged throughout the Snark base.

While they distracted Maraud’s forces, Yrik convinced Kofi to escape and warn Bhadsha. Despite his initial reluctance, Kofi fled.

The Snarks pursued him for hours, but he managed to escape with Franklin’s help. The two friends, along with Friday, planned a daring raid on Bhadsha’s fortress to rescue the Power Pack.

But when push came to shove, Kofi chose to save Bhadsha from Maraud.

Tragically, Friday was destroyed in the process.

When the battle concluded, the three reunited with Yrik and the Power Pack – and halted the Snark war. 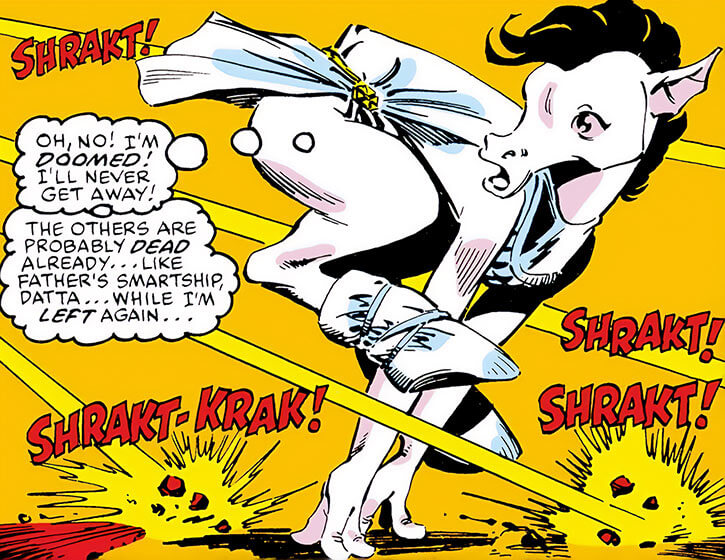 Kofi is a fairly typical example of Kymellian teen. He has pale white skin and a dark mohawk-like mane of hair that runs across his head.

Kofi’s eyes are large and red. Like an Earth-born horse, they are set on the sides of his head while his ears sit on top.

Like Nightcrawler (Kurt Wagner), his hands have two fingers and one opposable thumb.

His feet have hooves and his knees’ joints bend in the opposite direction as a human’s would.

Presumably, Kofi wears what one would consider typical Kymellian garb for his age.

For all intents and purposes, Kofi is a fairly typical teen. He is impetuous, eager, and courageous beyond his years. In many ways, his personality mirrors that of his Earth-born “cousins”.

Kofi truly feels a familial bond with the Power children, and would gladly sacrifice his own well-being to protect them.

Kofi’s feelings for the Snarks were a completely different matter. He distrusted them and harboured ill-will towards them. Moreover, he grew to resent his father due to the amount of time Yrik spent dealing with them.

This changed after Kofi saved Bhadsha from Maraud. He grew to realize that not all Snarks were as corrupt as Maraud. With that realization, he started to see the value in his father’s work.

Moreover, he was able to forgive his father’s emotional distance after Yrik’s encounter with Cloak (Tyrone Johnson). At that moment, he understood that the pain of losing his mother and fear of losing Kofi had made Yrik distant over the years. 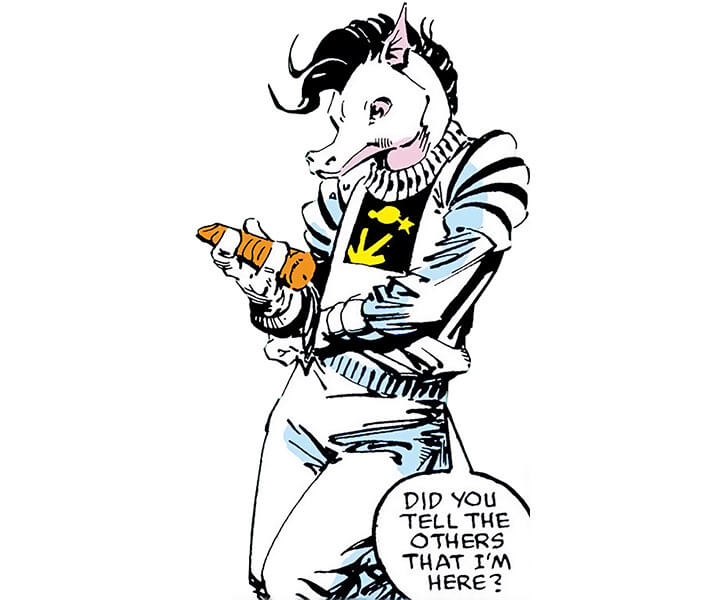 “Greetings cousins ! My name is Kofi and I have come to earth to save you !”

“I was as proud and heedless as you once…”

“One of your human captives taught me this fighting style, Snark ! It’s called the Jack Hammer — and it can accomplish miracles !” 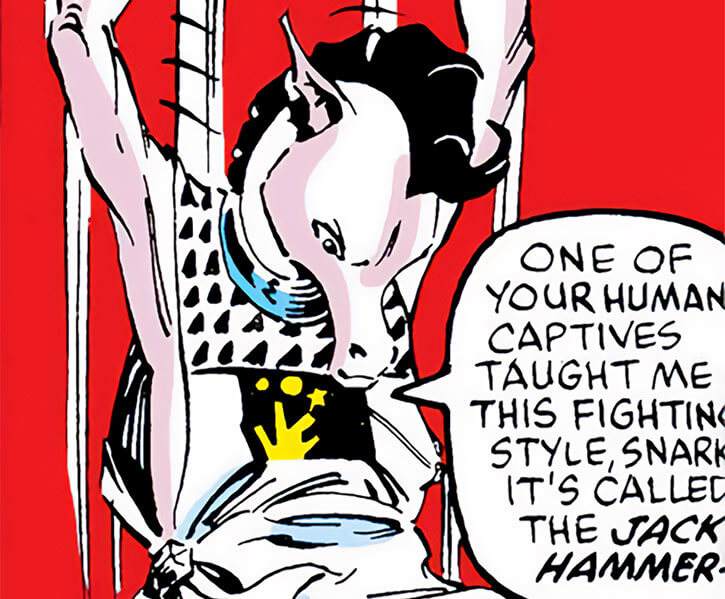 Teleportation can only be used on others if Kofi is in physical contact with them (-1FC).

Miscellaneous (Nictating Membrane over eyes enables him to see underwater). 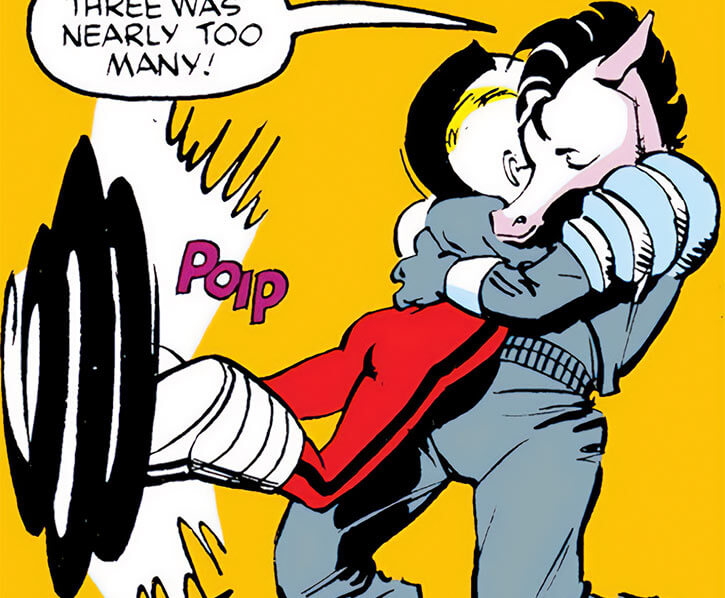