Komodo is one of the characters who appeared in 2007, when the Avengers Initiative was launched. Most such characters were young superhumans who were drafted to receive training at a special boot camp to marshal the USA’s superhuman resources.

Komodo is a second-generation Lizard. As such she has extraordinary strength, speed, reflexes, and amazing regenerative powers. She is able to regrow a limb within seconds.

Like many superheroes with Regeneration, she has an annoying tendency to get hurt.

She can revert to her human form at will, but will only do so with people she really trust.

Six weeks after obtaining her driving license, young Melati Kusuma lost both legs in a car accident. “No drugs, no alcohol, just a stupid kid driving too fast”, as she later put it.

Kusuma became obsessed with healing her handicapped body, and became a brilliant student of biology. After she graduated, she worked with Dr. Curt Connors, who had years ago created a formula to regenerate his lost arm.

The formula was successful, but also had the unanticipated effect of turning him into the Lizard, a reptilian monster with healing powers who became a classic Spider-Man foe.

Connors and his student worked on a way to make the formula safer. Suspecting that Kusuma had a hidden agenda, Connors made her promise that she wouldn’t do anything reckless. She complied in a way, only injecting herself with the compound in secrecy and after having carefully modified it.

The experiment was a success. Kusuma became a female-looking lizard-human hybrid. Her legs grew back, and that was all that she wanted. Becoming scaly, and having a tail and a reptilian body was an acceptable side effect for her, as she was desperate to walk again.

After discovering what had happened, the angry Connors demanded that she do something responsible with her powers, and Melati joined the Initiative. Now known as Komodo, she was part of the first squadrons of Initiative trainees, along with Cloud 9, Hardball, Trauma, Slapstick, Ultragirl, Detritus and Rage.

Komodo was present at the training accident where fellow trainee MVP was killed, and accidentally lost an arm herself. It grew back in a matter of seconds.

Komodo also joined the other trainees and the Avengers in saving the president’s ranch in Texas from a massive HYDRA attack. She performed very well, and was activated for field work for a special mission: use S.P.I.N. technology to take away the powers of the renegade Spider-Man.

The reflexes and strength of Komodo were a match even for Spider-Man, but the web-crawler resorted to psychological warfare. He called her a “dollar-store version of the Lizard” and convinced her she would fail even as she had him pinned down. Spidey also warned her that her powers would be taken away when he defeated her.

Spidey then won the fight by blinding her with webbing. A shocked Komodo begged Initiative officer War Machine not to have her powers removed, as she considered her former human identity to be a nobody.

War, what is it good for

During the World War Hulk events, a number of Komodo’s teammates broke rank to go and fight the Hulk. Komodo chose to follow orders and stay put, despite being as action-thirsty as them. She was afraid that if he went AWOL, the Initiative would take her powers away.

Komodo started to fight against her inner fears when she started a romance with fellow trainee Hardball. The fact that he accepted her in both her forms helped Kusuma to regain confidence in herself. The relationship became very important for them.

Some weeks later, the MVP clone called KIA started his mad rampage in Fort Hammond. He used alien omni-weapon the Tactigon to kill everybody involved with the accidental death of his original self. Komodo joined Cloud 9 and Hardball in an attempt to find the other MVP clone. Apparently, this time around, she was unafraid of potential punishment.

Komodo and Hardball fought KIA in the clone’s home in Kentucky. He used his Tactigon to infect her with poison so potent that it would kill her before she could regenerate. In a desperate gamble to save her life, Hardball used his power to sever her poisoned legs, stopping the toxin before it could travel to the rest of her body.

Although he managed to save her, this drastic solution was especially painful for her as it reminded her the original loss of her legs.

When Komodo completed her Initiative training, she was assigned to Arizona, as a part of the Desert Stars team. Hardball was assigned to the Nevada team, the Heavy Hitters, but they kept meeting once a week. When the new 3-D Man and the Skrull Kill Krew arrived in Arizona and identified team member the Blacksmith as a Skrull, Komodo helped them to fight and kill the Skrull infiltrator.

The rest of the Desert Stars had been incapacitated during the fight. Thus, Komodo left with the 3-D Man and the Krew to travel to Nevada to help Hardball’s team and find the Skrull infiltrators within the other Initiative teams. She took part in the final battle with the Skrulls in Fort Hammond.

During a week-end with Hardball, Komodo discovered that her boyfriend was planing to steal the Lizard formula for HYDRA. He then confessed to her that he had been employed by the subversive organization all along, and that they had promised him to heal his quadriplegic brother with the formula. Komodo accepted to help him.

However, when Hardball met with with senator Pullman, his HYDRA superior, Komodo came with the Heavy Hitters to arrest the bad guys. She had lied to the Initiative to protect her boyfriend, though, telling them that Hardball had infiltrated HYDRA.

Things went awry when the senator injected himself the Lizard formula and became something very much like Godzilla. He defeated Komodo and the Hitters without breaking a sweat, but in the end Hardball killed him. Not wanting to drag Melati into his problems, Hardball joined HYDRA and fled with the surviving terrorists.

Since he had killed Pullman he could take his place, thanks to the pseudo-Darwinian HYDRA rules.

Komodo later insisted on accompanying the Shadow Initiative in Madripoor to take Hardball down.

Komodo is a rough, direct, dry, somewhat feral warrior. She acts tough and speaks tough, and is highly pragmatic. It must be noted that she is also intelligent and smart.

This personality, however, is largely a shield for her traumatized inner self. Ever since her car accident, she considers herself a freak, and relegates her insecurities to her human form, considering it to be crippled and inferior.

The romance with Hardball was a positive experience for them both, and did a lot to repair her battered self-esteem. Despite being so young, and having only been together for a few months (most of those long-distance), their mutual feelings were very strong.

(After shooting through her to kill a Skrull).
3-D Man: “She’ll regenerate in a few minutes. I avoided major organs.”
Komodo: “They are all major when they are splattered on the ground… but thanks.”

Zzzax: “Zzzax will dissolve you…”
Komodo: “Oh, snap. He can do that ? Getting grabby, aren’t we ? I don’t think my boyfriend is gonna like it. You heard me, boyfriend ? Any time would be great !”
Hardball: “I’m trying… Never… done… this… before…”
Komodo: “There are times when hearing this is nice. This isn’t one of them !”

The best-known reptilian brute in the DCU is Killer Croc, but he doesn’t have strong regenerative abilities. Thus, a good alternative would be to have her study with Bushmaster of the Global Guardians before his death, and be drafted into the Initiative when she came back from Venezuela.

As Melati Kusuma (her human form), Komodo has physicals stats of 02/02/02 and a Serious Physical Restriction (lacking both legs). 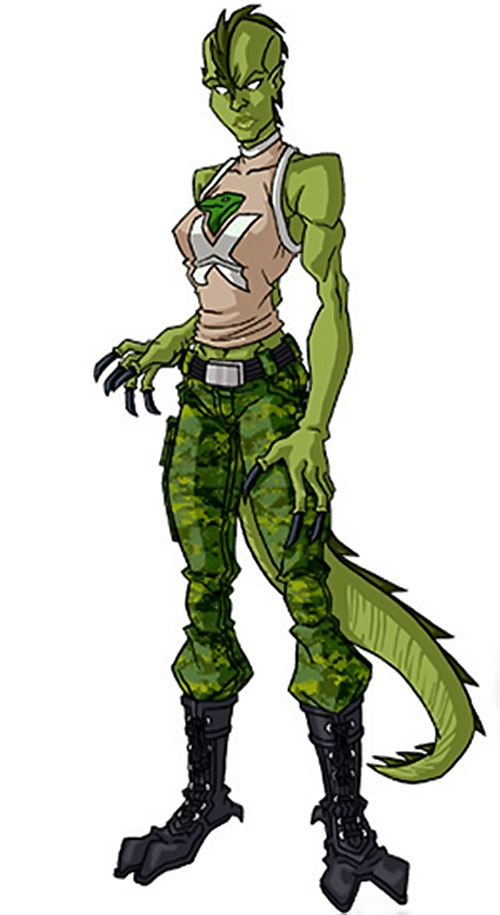 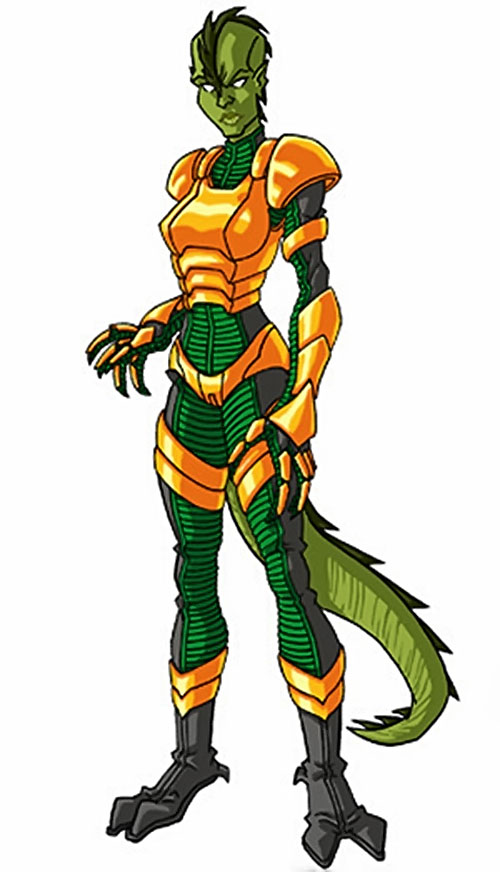 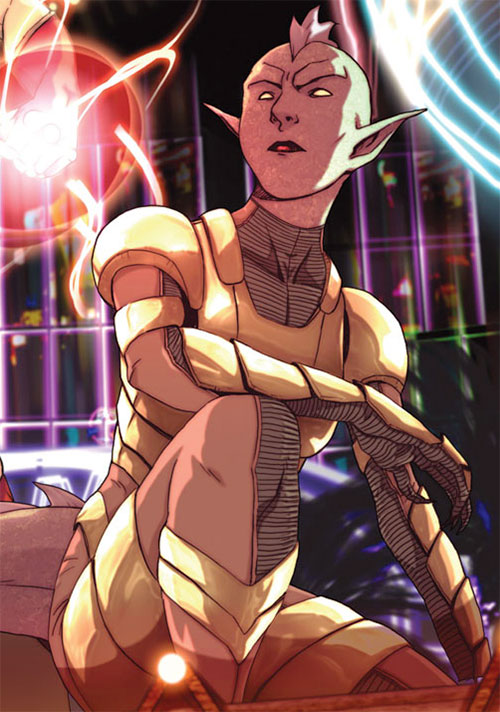