The members of Komptin’s race are physically powerful despite their size.

They have a pair of prehensile tentacles jutting from their heads, which can reach over 12 feet. Many, including Komptin, are skilled at using them in combat.

He can also leap limited distances, and by curling himself into a ball with his tentacles circled, he can roll along the ground at a fair rate.

His Kaliman Retriever is a huge, vaguely canine, creature, standing approximately 7’ tall. At rest it appears a relatively docile slob. But when roused it’s a vicious engine of destruction.

Fairly intelligent, it can:

Born on the planet Kalima, in the Negation universe, Komptin joined the Negation military as soon as he was able.

After 18 years of exemplary service to the Negation Empire, Komptin was assigned to oversee a testing facility. Therein, abductees from the Bright Universe were observed, prior to a full scale invasion there. This proved to be his first failure.

Some of the prisoners escaped, led by Obregon Kaine, on whom Komptin fixated his anger. As soon as the breakout began, Komptin was pulled out of the base by General Kryzorr, who initiated the destruction of the planet, but not before some of the prisoners had fled.

Komptin appealed to Lawbringer Qztr for the authority to track the escapees. He not only survived the appeal, but was granted the authority, as he amused Qztr.

Tracking them to the planet Senkiem, they again slipped through his grasp, and he destroyed the Negation spaceport there to try and cover his actions.

When the escapees, with powerful new allies, came into conflict with one of the Negation’s Battle Groups, Komptin was subject to the order to temporarily avoid them that went out to all Negation forces. But he chose to ignore it. First travelling home to Kalima, he collected his Kaliman Retriever, Gullit, then tracked down the escapees.

He caught up to them as they were attacking the throne world, and ended up confronting Kaine in front of the Emperor’s throne. Their presence angered Qztr, who transported them both, and Gullit, to the quarantined planet of Karakorum.

Kromptin immediately attacked Kaine. But he then realised where they were. Kromptin thus fled with Gullit, while Kaine was captured by the natives in their hunting form. 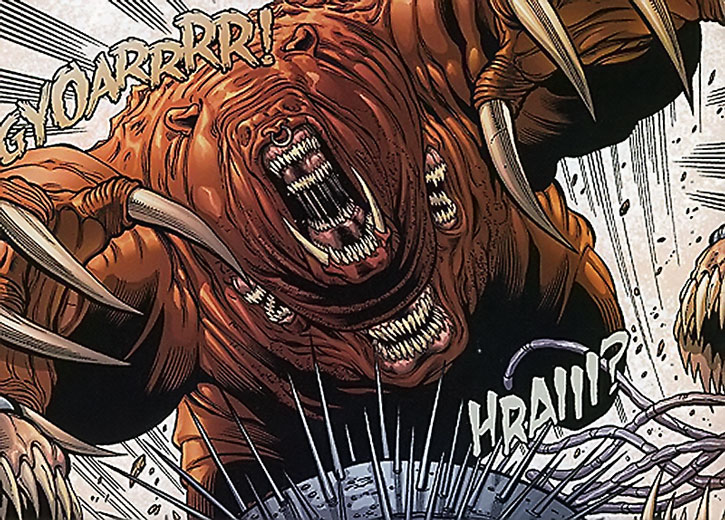 Tracking them, Komptin soon abducted Kaine from the Karaki’s village. He explained that they were a deceptively peaceful alternate form of the beasts which had attacked them on arrival.

The Karaki were quarantined on this planet because they took any lifeform which arrived on their planet. Then they performed horrific rituals which allowed them to create a portal to the being’s homeworld, where they would hunt down and kill every member of their victim’s species, before returning home.

While searching a suspect hut in their village for communication devices from former victims while Komptin and his pet lead the Karaki away, Kaine was confronted by Komptin, who suspected betrayal.

Too late they realised that the Karaki could perform the ritual on Komptin’s pet, who would be intelligent enough for them. They reached him to find a portal to Komptin’s homeworld, Kalima, open.

Return to the homeworld

Stepping through to Kalima, they found the Karaki hunting down the Kaliman Retrievers. Komptin quickly took Kaine captive, holding him in his mother’s house. He forced him to place a distress call to the other escapees while they waited for General Kryzorr.

While Komptin was absent, his brother, Kamfir, revealed himself to be part of a resistance against the Negation. He freed Kaine.

Komptin found them before Kaine could escape, and was enraged by his brother’s actions. But the other escapees arrived to rescue Kaine before Komptin could do anything to him.

General Kryzorr, who had witnessed everything, was displeased with Komptin. He suggested a show of loyalty would be necessary for Komptin to remain in service to the Empire. Komptin executed his mother and brother, and left with Kryzorr.

Assigned the job of executing those considered rebels, or just on the wrong planet at the wrong time, Komptin performed the job with true psychosis. He looked at all his targets standing over the mass graves until he saw Kaine’s face on all of them, and then firing until out of ammunition.

When not executing, he was sullen and noncommunicative, until he heard the news of escapee Evinlea becoming betrothed to Emperor Charon. This betrayal sent him into a rage, and he killed his handlers, taking the ship for himself.

(Outlined by Bedard at www.geocities.com/negationspace/interview2.html (defunct)). 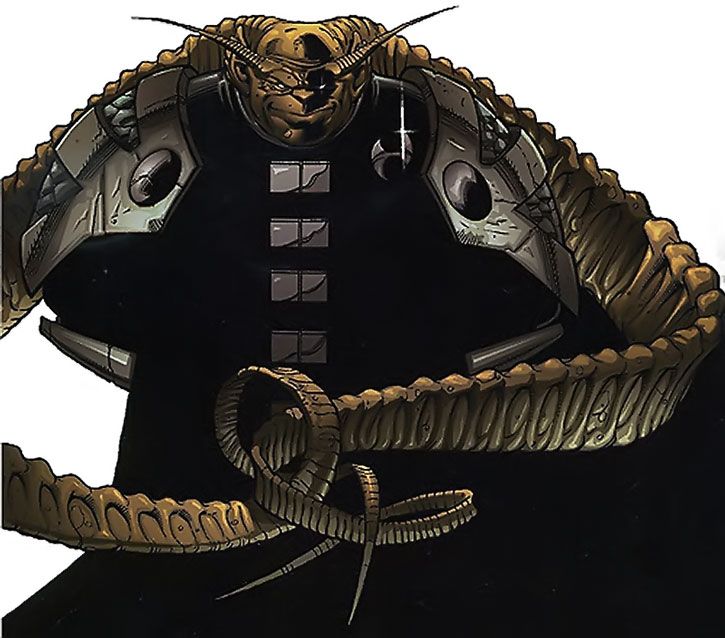 Kaine makes peace with Komptin by giving him a Kaliman Retriever pup. The pair teams up, luring Charon and Danik to the hellish corner of Negation Space known as Perdition.

They set off Appolyon’s “Soul Bomb”, which turns Charon and Danik into ordinary humans, whom Kaine then beats them senseless with a toilet (debris from a world destroyed by the recent hostilities). He then leaves the pair to Komptin’s tender mercies.

Short tempered and sadistic, Komptin has an officious bearing. He reacts violently to any disobedience of the rules, and is completely devoted to his career.

He became obsessed with gaining his revenge on the escapees who embarrassed him, especially Obregon Kaine. Kromptin risked the Emperor’s wrath to gain it. This hatred shifted to include Charon once he accepted one of the escapees as his consort, which made Komptin’s sacrifices irrelevant.

“Well, Gorg, I can’t say much for the food or the women here, but you people do put on a fun execution.”

“Don’t you see ?! I can’t let him go and kill Kaine and the others. Kaine’s life is mine alone to take ! Mine and no one else’s !”

His Credentials and Connection fluctuated from high level to non-existent as he moved in and out of favour with Charon. Prior to its death, he also had a Pet named Gullit. 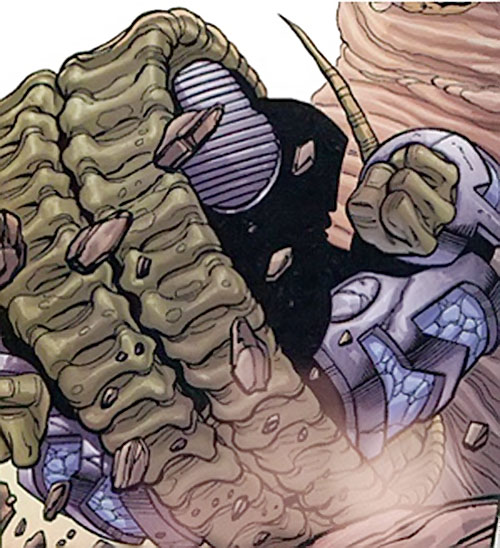