Konik is an experienced agent. He demonstrated considerable talent in securing exotic weapons from other organizations and inventors by all necessary means.

He’s both a fair man of action and an adept spy. And of course he has access to a tremendous arsenal that he can tailor to the mission at hand.

Konik worked for the Illegal Arms Division of the criminal organization called the Corporation, possibly as the division head. His job was to :

Konik was quite successful in this. He made his division a profitable favourite of the Corporation’s board.

(The Corporation was a sizable criminal concern in the Marvel Universe back in the late 1970s and early 1980s. But they were then comprehensively taken down by infighting, law enforcement and super-heroes. So they may be unfamiliar to modern readers.)

Not the Solar Rifle

In 1978, Konik petitioned the Corporation to be allowed to steal a powerful weapon called the Solar Rifle. But Duke, a member of the board, tasked him to steal Machine Man (Aaron Stack) instead. This robot was becoming a recurrent foe of the Corporation, but would also be a formidable source of profit if stolen.

The cany Konik passed himself for one Miles Baker. Baker was a lawyer who had been recommended to Machine Man’s best friend, Dr. Spalding. As Baker, Konik talked Machine Man into deactivating his weapon systems so he would be better accepted by humanity.

However, as he did so, Machine Man conducted a sensor sweep. He thus realised that “Baker” was about to draw a hidden sonic pistol from the book he was holding. Machine Man seized him, but was repulsed by another hidden weapon.

Konik dove for his sonic pistol. But his shot missed Machine Man, who grabbed him again and threatened to throw him through the wall.

The defeated Konik asked for his monocle back. Sensing a trap, Spalding examined it and accidentally triggered a gout of flame from the monocle. Seizing the moment, Konik dove through the flames and escaped on a Corporation helicopter.

As Konik ruminated what his next attempt on Machine Man would be, the Corporation pilot coldly reminded him that the Corporation only allowed two attempts and that he’d better make good on the next one.

However, Konik was never seen again and the Corporation was eventually brought down by other heroes.

Konik treats exotic, powerful, advanced weapons like candy in a store. He mounts daring missions so he can catch them all.

He’s a professional, calm operator who handles pressure and danger well, as well as a smooth talker and manipulator.

“I’m anxious to get started right away. If I can steal the weapon I have in mind, it will outsell any of these babies !”

Equipment:
Konik can access a vast amount of advanced gear. For instance his labs had a bewildering variety of energy guns from all around the world. The equipment he selected when attempting to steal Machine Man was :

This equipment was specifically selected for a low-profile, social engineering mission. The equipment in Konik’s plans and labs was closer to advanced military gear, such as energy rifles.

There is some extrapolation about his skills. Beyond those demonstrated in his short appearance, those are the skills he would reasonably be expected to have given his position. 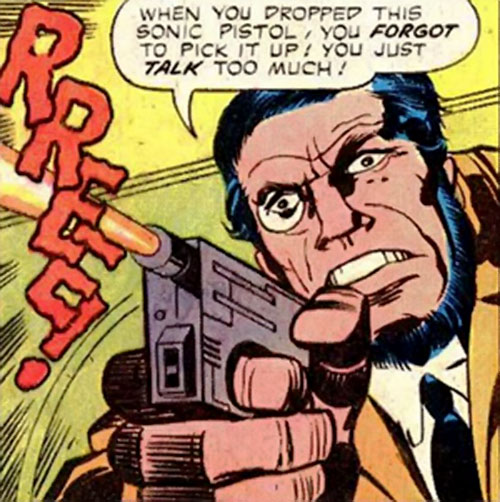 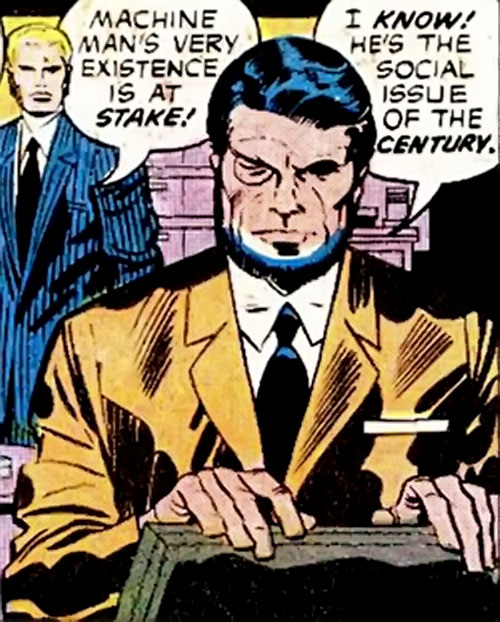