He was briefly brought back ten years later in Captain America. And received some development, because Mark Gruenwald was cool.

Kono is a martial artist of superior strength and durability. He can crush most common obstacles. Hurting him with punches and kicks is very difficult, even for strong and skilled fighters. He could even survive a nasty gunshot wound from a rifle round.

As a former sumotori he is skilled in wrestling, shoving and holding his ground. His style and weapons suggest additional training in a form of karate, a form of gusari-jutsu, and perhaps Western-style fencing.

Sanada often carries a melee weapon. If he can carry an obvious weapon he will have a large fighting chain (gusari). If he must be more discreet, he’s fond of carrying a sword-cane instead

The Sanada siblings both are excellent martial artists. It isn’t clear whether Kono and Sheoke were raised together, though. Sheoke seems more American, and Kono more Japanese.

Kono had a career as a successful sumo wrestler. It is possible that he is Japanese-American, but that his physique and fluency in Japanese allowed to compete as an early example of nikkei sumotori.

If so, he may have spent most of his adolescence and early adulthood in Japan rather than in the US. But this is hypothetical.

Kono Sanada eventually abandoned wrestling to become a criminal mercenary. One gets the impression that by that point his little sister already had a career as the costumed mercenary Snapdragon. She thus may have convinced him that there was more money to be made that way.

Sheoke was a senior mercenary working for Damon Dran when Kono was first seen. Kono was part of a team of six international killers assembled by Dran. It is thus possible that Sheoke recommended Kono for the job.

In 1983, Dran clashed with the dreaded Black Widow (Natalia Romanova). Both Sanada siblings were defeated by the Widow. During the fray, Kono was hit in the head by a stray bullet from another mercenary, “Deadshot” Darrance.

Hey little sister what have you done

The hardy sumotori survived without apparent sequellae. However, in 1993 his sister was accidentally killed by Diamondback (Rachel Leighton). This was traumatic for Leighton. Thus, when it became unclear whether Sheoke Sanada was or wasn’t dead, Diamondback investigated. 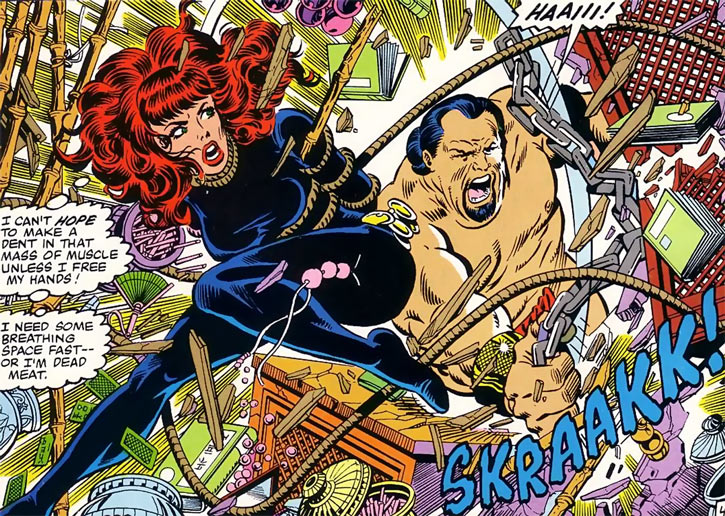 This led her to New Orleans, where she discovered that “Kono the sumo” was Kono Sanada. He was still working for Damon Dran, who was running a large criminal organisation in the NOLA area. Kono worked with a squad of hugely muscular thugs, and another lieutenant was Golddigger (Angela Golden).

Dran’s operation was wrecked by Diamondback, Captain America (Steve Rogers) and Americop – plus some allies, including the Widow. Dran was apparently arrested, but one gets the impression that Kono saw where this was going and fled in time.

Time goes on, on and on

Kono Sanada hasn’t been seen since. Which is a shame. His sister resurfaced, though.

When he knows he’ll be fighting, Kono dresses in a loincloth and sandal that evoke a sumotori’s look. Otherwise, he’s partial to tailored business suits that aim for an affluent, classy, conservative image.

He keeps his hair in a bun, which seems also meant to evoke sumo wrestlers.

Very calm, politely threatening, moves slowly. He sounds like a traditionalist, and is somewhat misogynistic and patronising.

If Kono gets a lot of screen time in your game (it *could* happen, eh ?) here is the skinny (so to speak) about sumotori diet and training .

“Was that your best shot ?”

He was originally meant to be a central casting type, so he can easily be plugged in everywhere. The League of Assassins would certainly make sense.

Contacts, Diehard, Equipment 1, Language (Japanese), Second chance (being moved against his will). 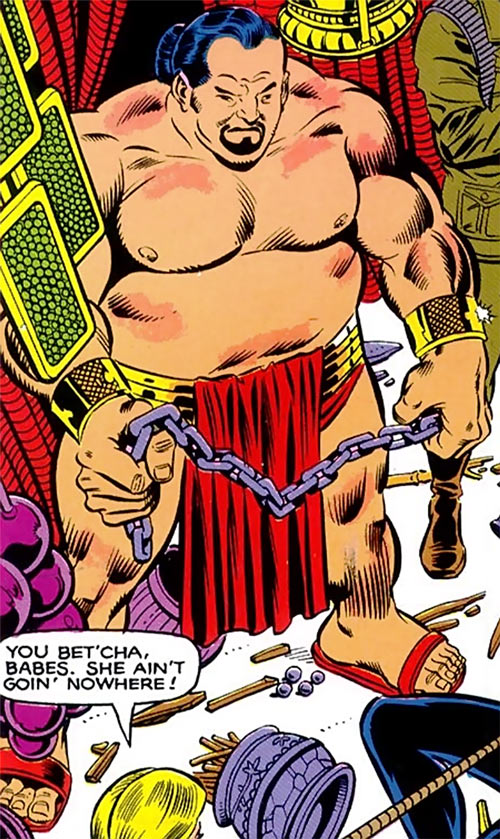 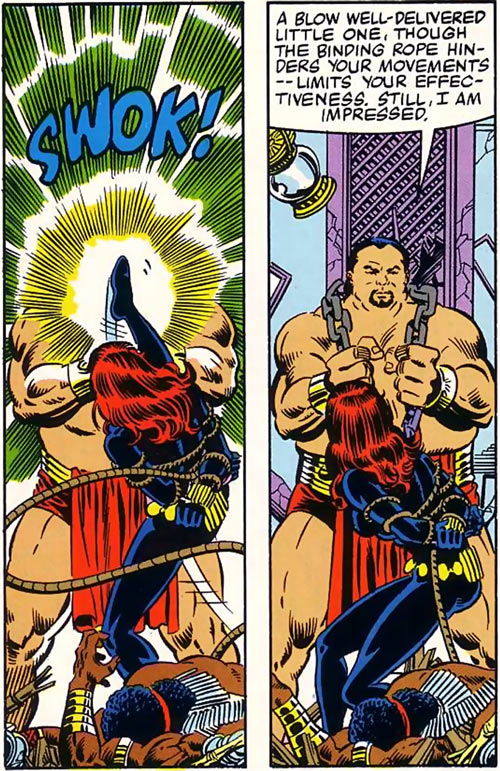 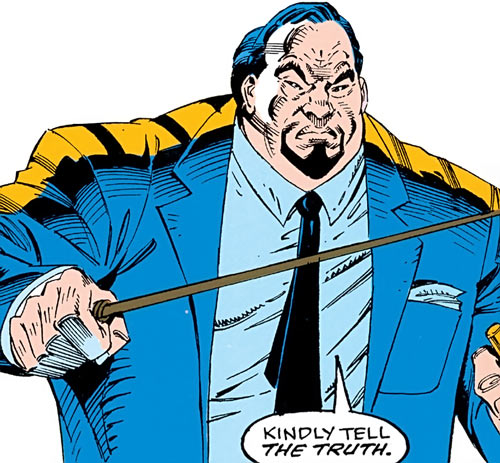