Korgo is an expert combatant and master of the taunt. He prefers to rely on brute physical force, but occasionally uses extremely heavy weapons.

At all times, he wears a Power Belt™. It gives him great superhuman strength and increases his resilience and stamina. The belt can also negate gravity. Korgo does not appear to have any superhuman abilities himself.

Korgo, as a greatly reputed space-tyrant, gives a grand impression. He easily gathers followers and henchmen. He has some very useful connections making him potentially into a very dangerous adversary.

Brinn Korgo, a wealthy and pugnacious space-brat, became notorious while he was a teenager as Korgo the Space Bully. He battled Kid Supreme with a power belt his parents bought him.

In later life he grew to become the intergalactic scourge known as Korgo the Space Tyrant. He was reputed to devastate entire galaxies (!) and leaving no survivors.

After his last defeat at the hands of Supreme he was locked into the other-worldly realm known as the Hell of Mirrors. Korgo remained there for 30 years.

During the late 1990s, he and the other inmates were released by the Televillain. Korgo went to Washington to battle President Bill Clinton , who was soundly defeated. He ruled America for a short while with Vor-Em, the freelance executioner, as his vice-President.

Korgo did not like being the ruler of the USA, however. To save face, he allowed Supreme to defeat him and imprison him again in the Hell of Mirrors.

Korgo sports a dangerous-looking costume with spikes and a horned helmet. He looks rather impressive and powerful with an impressive, muscular built. He also has a black moustache and a small black goatie and probably considers himself a handsome man.

As the Space-Bully, Korgo was out of shape and wore only rags of clothes, along the power belt and a mace.

Korgo is proud and a bully. He’s a space tyrant and a conqueror. Earlier, when younger, he used to use maces and dogs, but now relies on his (belt’s) brute force alone. Like a true tyrant he will be carried around by his underling. Naturally, he will also keep a harem whenever possible.

Korgo loves to spread destruction, mayhem and chaos around himself, until he steps in and takes over the reigns of power. Once a great devastating force in the universe, he has since mellowed down somewhat and has even developed a sense of humor. Korgo looks for challenges and when everything has been won or he is bored he moves on to new grounds.

He knows most of Supreme’s enemies well and considers himself an ally with them. He also retains a couple of contacts with the interplanetary organization known only as the Cosmic Dictator’s Guild.

Previously, he bought (or conquered) extremely powerful, devastating weaponry, probably from interplanetary arms dealers, and probably could do so again if he left Earth. Nowadays, he uses words as a weapon as often as the super strength gained from his power belt.

He believes in keeping in shape and requires that of all his underlings. When holding grandstanding speeches he speaks in a showman-like fashion, with lots of allegories and euphemism. For someone who used to be called a bully, an now a tyrant, he’s surprisingly intelligent and verbal.

“It means that according to cosmic dictators guild rules, I am America’s 43rd president, and you are wife number one, my stern little valkyrie ! First, prepare supper, then have yourself perfumed and brought to my chamber. We have a new dark age to celebrate !”

“You know, after so long in prison, adjusting to society is notoriously difficult, but not half so difficult as society will find adjusting to us !”

“So William Clint’s-Son, legendary gray-maned wolf of the Americas! Your enemy salutes you ! Hollah, colossus of the West ! The stars themselves shall shudder at our conflict !”

Korgo the Space-Tyrant is a apparent homage to Silver Age Superman’s classic foe Mongul. Thus, use either the Silver Age DC Universe in its entirety or Moore’s Supreme Universe, possibly as a parallel world, with its small differences and twists of these classic characters.

It can be assumed that Korgo was more savage as a youngster. Korgo the Space-Bully probably did not have the Charisma skill and his reputation and Hero Points were probably down at 50 only. Also reduce all stats, the Martial Artist and Weaponry Skills by 1 AP each.

He was probably too rebellious and free-roaming to suffer from the Age (Young) Drawback. Korgo the Space-Bully used to use a Mace [BODY 22, EV 4 (6 w/STR, 10 w/ Martial Arts, 21 w/Power Belt STR)].

Supreme: The Story of the Year by Alan Moore 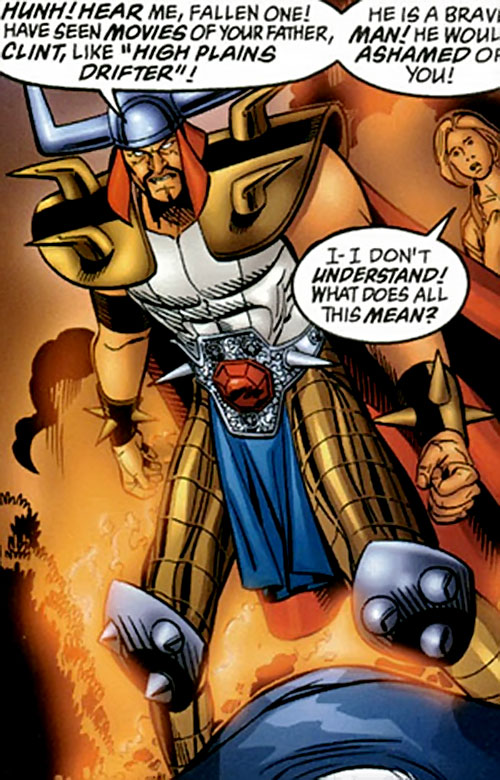 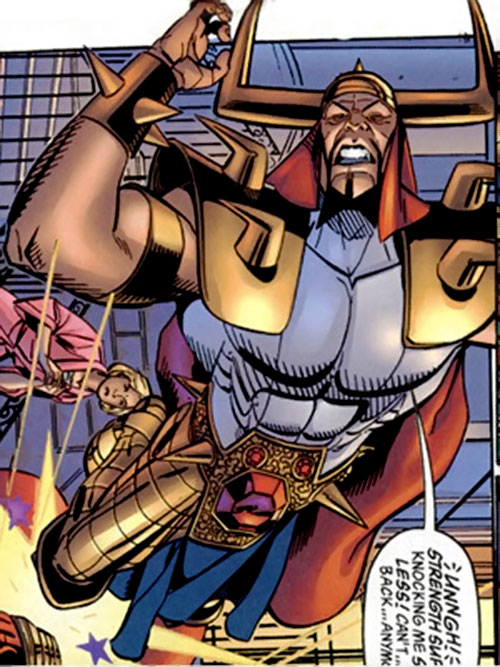