A large and physically powerful Shi’ar, Korvus is a highly skilled combatant. He is especially proficient in the use of his Blade.

He is also a skilled pilot, and well-versed in Shi’ar starship technology.

Korvus wields the Blade of the Phoenix. This a very big sword which was imbued with a fraction of the power of the Phoenix. Almost indestructible, the Blade can only be wielded by someone from Rook’shir’s bloodline. To any others it can be impossible to lift.

Korvus can spin it quickly in a circle, allowing it to act as a shield against multiple blasts. Furthermore, it seems to have a resistance to attempt to control it, such as causing feedback when Polaris attempted to use her magnetic control on it.

It also seems to provide it’s wearer with some degree of protection. Korvus has survived punches from Gladiator without being knocked out.

One of the Shi’ar Empire’s most guarded secrets is that, around 500 years ago, one of their people was once host to the Phal’kon, the Phoenix Force. They became the source of the Empire’s fear of the Phoenix.

Rook’shir became an intergalactic outlaw. This caused the Empire to form the first Imperial Guard. They eventually caught up to him, with Gladiator (or his predecessor) executing the rebel. A fraction of the Phoenix power remained in his sword, the Blade of the Phoenix. But it could only be wielded by one of his bloodline.

The Empire kept a tight control over those of Rook’shir’s bloodline. Therefore, as generations before him had been, Korvus was taken prisoner, his mother sterilized, and his brothers killed. But always one was kept alive, to serve the Empire should he be necessary.

As a youth Korvus was part of the slave workforce, repairing Shi’ar ships. When he became a man, they locked him away.

When the Empire detected another former host of the Phoenix, Marvel Girl, heading towards them, Korvus was offered his freedom in exchange for hunting her down. Having no alternative, he agreed, and they implanted him with a device which would kill him if he attacked another Shi’ar. Then they gave him the Blade of the Phoenix, and sent him out.

Intercepting his target’s starship, he confronted the X-Men aboard, requesting they hand Marvel Girl over. They refused, but the ensuing battle was short. Korvus took down his opponents, eventually coming face-to-face with his prey.

When she touched the Blade, however, it reignited her link to the Phoenix Force. As a result she and Korvus were telepathically connected, leaving them with a close bond. That ignited a mutual attraction between them. Marvel Girl convinced him to join them, and deactivated the device which had been implanted in his brain.

This is how Korvus joined the quest to rescue Xavier and stop Vulcan from getting his revenge on the Shi’ar. He helped the X-Men reactivate the dormant jump engines on their ship, modifying them to use his new team mates powers as their fuel source. They soon joined forces with the Starjammers, aiding them in rescuing the deposed Lilandra. 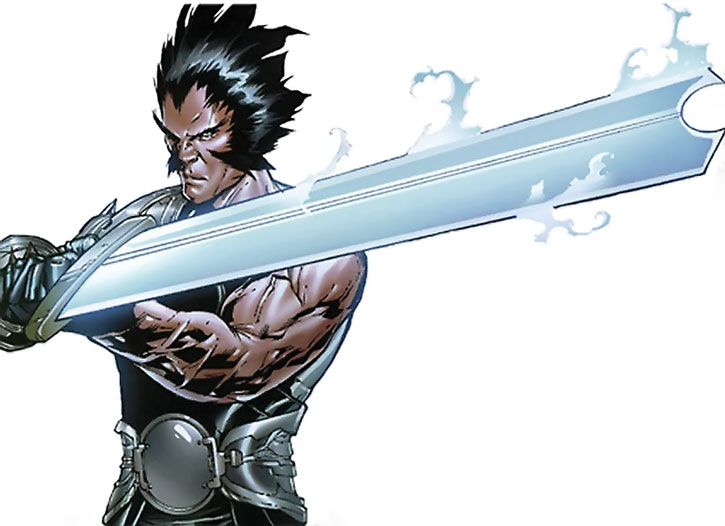 They caught up with their prey at the coronation of the reawakened D’Ken. There, they discovered Vulcan was now married to D’Ken’s sister, Deathbird, and Xavier was about to be sacrificed to the M’Kraan Crystal.

They attacked the gathering, but not in time to stop Xavier being shoved into the crystal. He was rescued by Darwin, and returned with his mental powers restored.

During the battle Vulcan killed D’Ken, and proclaimed himself Emperor. He then killed the Starjammer Corsair, his own father. When Xavier was rescued and taken back to their ship, Lilandra locked its controls. This forced Xavier, plus the X-Men and Starjammers aboard at the time, to return to Earth

Meanwhile, Lilandra returned to the battle. It ended inconclusively, with Vulcan escaping.

Following Corsair’s funeral, Korvus, Rachel, Havok and Polaris joined the remaining Starjammers, Ch’od and Raza. They dedicated themselves to removing Vulcan from power, aiding Lilandra in building her forces and in striking against the Empire’s forces.

The Starjammers later launched an attack on the strategically valuable, but unexpected, Feather’s Edge. They were surprised when Vulcan’s forces, warned ahead of time, ambushed them. The battle was interrupted when Vulcan’s flagship was destroyed by a third force, the Scy’ar Tal. Their name translated as ’Death to the Shi’ar‘.

Vulcan and Gladiator survived the ship’s destruction. They attacked the leader of the Scy’ar Tal, only to be easily dispatched. The Starjammers attempted to make peaceful contact with the Scy’ar Tal, but were rebuffed. The ‘jammers soon recognised the Scy’ar Tal as the greater threat when they unleash their main weapon – a stargate.

Called by a beacon dropped on Feather’s Edge, the stargate opened up. It dropped a star onto the planet, destroying it, its colony, and the ships which didn’t manage to escape in time.

From contact with their leader, Rachel learned that the Scy’ar Tal were originally called the M’Kraan. They claimed that the world of the M’Kraan Crystal, a holy site for the Shi’ar, was originally theirs before the Shi’ar drove them off.

Seeing the Scy’ar as the main threat, the Starjammers reluctantly accept the offer of a truce with Vulcan. They allied to take out Finality, the Scy’ar’s stargate weapon. Korvus was part of the small group which attacked the Finality station, while most of the fleet protected the M’Kraan world.

Korvus had to leave the battle when Vulcan fired one of Finality’s beacons through a wormhole towards M’Kraan. He and Rachel followed it through. She’d nearly stopped it when Gladiator intercepted her. Urging Korvus on after the beacon, she faced Gladiator in combat, going toe-to-toe with him.

Korvus’s craft was blown up by a shot from a previously friendly ship. Most were choosing to rejoin the Empire with Vulcan’s victory. Rachel reacted by shoving Gladiator aside and rushing to Korvus’ side. She was too late to stop the beacon, but in time to get them out of there.

They joined up with the fleeing Lilandra, but the other Starjammers were Vulcan’s prisoners. The three continue their resistance against the Empire.

Having spent most of his life a prisoner or a slave, Korvus maintains a cautious reserve around others. He is careful with his words, which are usually delivered in a formal manner. But he is loyal to his chosen allies.

He has had some trouble getting to grips with the relationship he has developed with Rachel. It was made especially intimate by the mental bond accidentally formed between them.

“Stop. I mean no harm to any but the girl who was touched by the Phoenix. But I’ll do what I have to to get to her.”

Advantages:
Misc: Guardsbane (Imperial Guard member cannot spend HPs when fighting the Character or people fighting along with the Character).

Equipment:
Blade of the Phoenix [BODY 30, EV 12, Energy Absorption (feeds Power Reserve): 12, Energy Blast: 08, Force Shield: 06, Power Reserve (Fuelled by Energy Absorption, powers Energy Blast): 12, Reflection\Deflection (only works against attempts to control the Blade, such as by Magnetic Control, causing a feedback attack of Energy): 12, Skin Armor (wielder): 10, Misc. Drawback (Only one of the blood of Rook’shir can lift the Blade)].

The Guardsbane Advantage and the Connection to the Starjammers were gained upon joining that team.

I gave the Blade of the Phoenix a high body since, if it wasn’t indestructible, the Shi’ar would have probably destroyed it.

Source of Character: Marvel Comics (up to the Emperor Vulcan series). 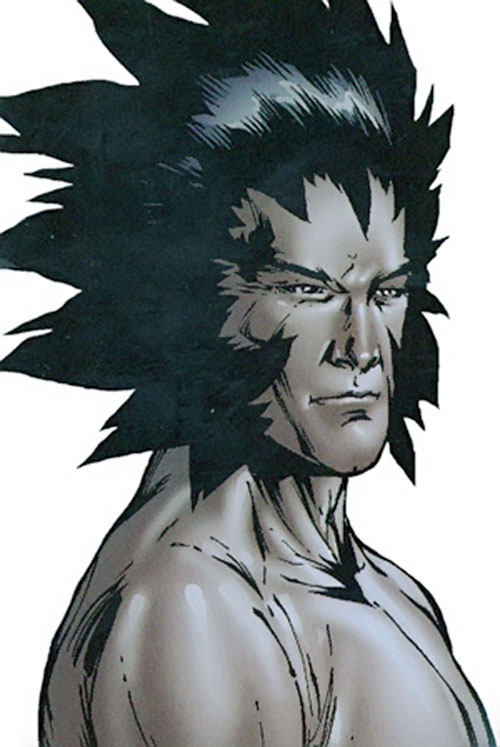