Krogg is an obscure enemy of the Werewolf by Night. He was seen but once, in 1973.

So no, not the same Krogg who clashed with Doctor Droom.

FWIW, the Werewolf fought Krogg not too long after fighting Kraig. Bit of a theme, here.

Krogg is a disembodied entity. However, he can possess living beings, then mutate them into something resembling his baseline form within a day.

In baseline form, he possesses immense strength (about “Class 25”). He could also withstand hunting rifles (presumably firing .30-06 rounds). The Werewolf by Night only managed to harm Krogg once, by dropping onto his back by surprise and clawing and biting as deeply as he could.

Krogg was summoned to Earth by a warlock, pharmacist and idiot named Amos Treach. Since that happened in California and Treach presumably came via the California Trail  (as opposed to being a Spanish settler ), this likely took place after the 1840s.

Krogg couldn’t be contained. He left and started killing to sustain itself, savaging several people. Determined to atone for his mistake, Treach built a stout door within a nearby cave, and tricked Krogg into entering. The pharmacist then shut the door, trapping the demon thanks to Krogg’s mystical weakness.

In 1973, Jack Russell found the cave. Hearing a moan within, he forced the door open. Krogg’s immaterial form attempted to possess him, but that didn’t work on werewolves – who had a human spirit and an animal spirit. Not realising what had just happened, Russell found and read Treach’s strange diary.

Krogg instead possessed a poor, nearby rabbit. Over the following day he mutated the cute lil’ rabbit into his own hulking form, presumably killing animals to gain mass. He then stumbled upon the Werewolf by Night. 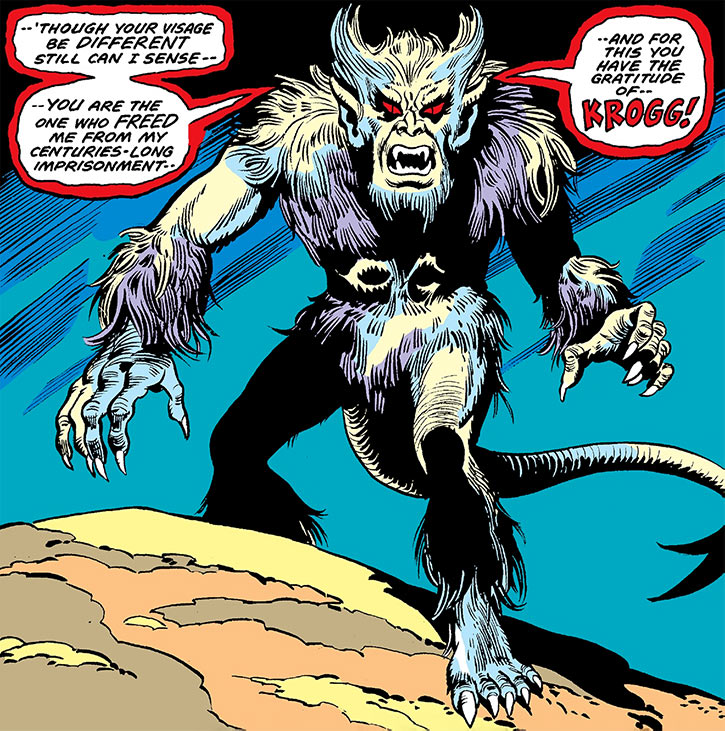 The two monsters fought for a while. The Werewolf was far weaker, but markedly more nimble and evasive. He even wounded Krogg, but the demon slew two hunters to replenish his life force. Eventually, Krogg forced his foe to flee.

The Werewolf ran into the cave where Krogg had been imprisoned. He then tried to run out, but Korgg was already there. The werewolf clambered over and past him, and when Krogg attempted to blast the lycanthrope  with his fire breath he triggered a landslide. Caught under tonnes or rocks, the demon was once again trapped in the cave.

However, Krogg turned his body back into the lil’ rabbit, which was small enough to crawl out of the rubble. The demonic leporidae sinisterly scurried into the haunted night… and was never seen again.

Perhaps it ran into a mystical defender. Or perhaps it simply ended at the wrong end of an owl. Owls are cool.

Krogg looks a bit like a Wendigo in Canada (the type that clashed with Hulk, Wolverine, Alpha Flight, etc.). So perhaps there’s some commonality.

He talks in a supernatural, extremely loud voice.

Krogg presents himself as a noble soul, only doing what he must to survive and behaving with honour. For all we know, this is true by his dimension’s  standards. From a more local point of view, though, this is laughably hypocritical.

Thus, in practice, he’s like any other pompous, wordy, savage, murderous demon full of pride and hatred. I bet he doesn’t even have a favourite Bananarama song . Wotta jerk.

“KROGG IS INDEBTED TO YOU, LITTLE ONE — AND KROGG SHALL REPAY HIS DEBT — BY MAKING YOUR DEATH MOST MERCIFULLY SWIFT !”

“INSOLENT CREATURE –! HOW AM I TO KILL YOU IF YOU WILL NOT REMAIN STILL ?”

Drawbacks:
Strange Appearance, Serious Rage, SPR (Krogg can only heal or sustain himself through Vampirism), Misc.: cannot escape if trapped in a closed space. 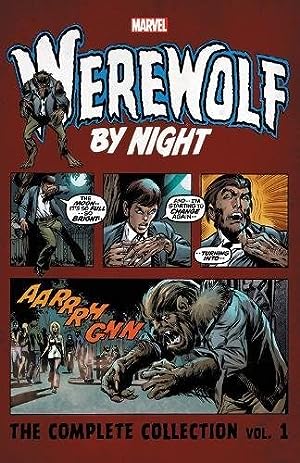