Krypto is Superman’s dogs. The following are very old, minor notes. These depict Krypto as he existed before the Crisis on Infinite Earths.

These are primarily a rescaling and improvement of the First Edition, Mayfair stats for him.

Although Krypto was originally bought by Jor-El as a pet for his child, Jor-El was forced to use the dog in one of his rocket experiments. Krypto was successfully launched into orbit, but a meteor collision knocked the rocket off into space. When Krypton exploded, 58 days later, Krypto’s capsule was drawn to Earth through the same space-warp a Kal-El’s escape craft.

Unable to break out of the indestructible craft, Krypto was captive until the rocket crashed on Earth. The dog then tracked Clark Kent/Superboy down to Smallville. He then led Clark back to the rocket, where Superboy discovered the dog’s origins.

Krypto often assisted his young master. He disguised himself as Chip, Clark’s pet, with the aid of a wood stain dark patch.

Krypto eventually left Earth. But he returned to Superman years later, old and in poor shape. Superman sent Krypto to a “Fountain of Youth” that rejuvenated the dog and made him temporarily immune to the Kryptonite meteors that surrounded the Earth. Krypto set out from Earth, built a Doghouse of Solitude, and only returned for brief visits since.

Krypto did make one symbolic Post-Crisis appearance in the LSH/Superman Pocket Universe crossover. He lost all of his powers due to Gold Kryptonite, though.

Of course, you could have him fully in a Post-Crisis world if you want. Just say that Krypto was a preliminary test by the Cadmus Project of the experiment which allowed the creation of Superboy. Considered a failure at the time, the dog was set loose, and currently roams the suburbs of Metropolis, looking for his place in the world…

Krypto is a dog.

Although Krypto’s intelligence is as far above an ordinary dog’s that the pre-Crisis Superman’s intelligence was above a human’s, he’s still basically a dog and acts accordingly. He’s playful and unusually cheerful, but can become extremely menacing when anything threatens his master.

His animal instincts allow him to detect thoughts of hate and fear. Thus, he can usually penetrate the disguises of criminals.

Adapted by Sébastien Andrivet (from the Superman sourcebook by Mayfair). 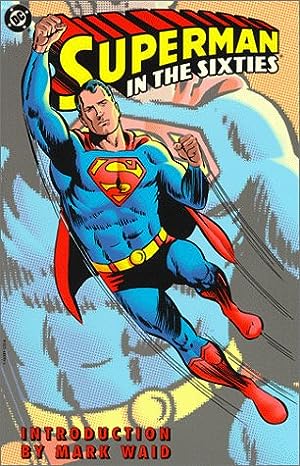 Superman in the Sixties