This supernatural killer/mercenary appeared in an episode of Buffy the Vampire Slayer, in 1998. He’s easy to use in many contexts and tech levels.

For more context about this show, you can read our Buffy Summers the Vampire Slayer character profile.

Kulak could quickly grow large knives made of bone that were expelled out of slits in his inner forearms.

He was skilled in blade work and knife-throwing.

Kulak was one of the combatants hired by the vampire Mr. Trick for Slayerfest ’98. This “fest” was a gathering of mercenaries and assassins from the human and demon worlds. It offered a prize to the one who killed the Vampire Slayers Faith and Buffy. Buffy was cornered in a wood cabin by Kulak, whom she quickly defeated.

Two other Slayerfest competitors, the twin German assassins Hans and Frederick, attempted to take advantage of Buffy’s confinement by firing a grenade into the cabin. Buffy escaped out the nearest window. Kulak attempted to do likewise, but the window he tried to exit was boarded up.

Kulak rebounded off of the boards, falling face first onto the grenade just before it exploded.

The demonic Kulak was a humanoid. He was distinguishable from a human by his scaly skin (yellow with orange stripes), his pointed teeth, and the parallel sets of small triangular spines (similar to a stegosaurus’s) running along his sagittal crest and the backs of his forearms.

The bony knives Kulak creates are gray instead of the bone-white that might be expected. They are thick and rounded; the knives look almost like bowling pins that have had the lower body whittled down to a thick double-edged blade.

Kulak wears loose-fitting khaki pants and a black vest, allowing him great freedom of movement and keeping his forearms (from which he summons his blades) exposed.

Kulak was laconic, speaking in clipped sentences when necessary. Like most thugs, he preferred to keep things simple and violence was his preferred problem solving technique.

Offering to help free a colleague from a trap: “Want me to cut that leg off ?”

Campaigns requiring supernatural or alien thugs could put Kulak to decent use. He might also appear as one of a species living in some remote exotic unexplored wilderness ala the Marvel Universe’s Savage Land .

Kulak of the Miquot Clan

Equipment:
Knives (x2) [BODY: 06, EV: 04 (05 w/ STR)].
These thick knives are grown from Kulak’s body. It is unknown how quickly he can grow a pair of knives. For this writeup, it is assumed that he cannot grow them quickly enough to create multiple pairs during combat, but can replace lost or damaged knives between scenes, so to speak. 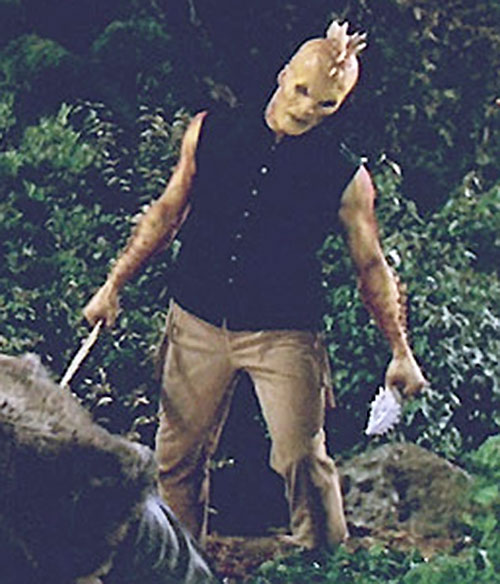