Kulan Gath possessed the ability to tap into and manipulate magic on a level approaching that of the Earth dimension’s most powerful mage Doctor Strange.

Deriving power from ancient N’Garai demons and the lives of sacrifices, he could:

All of Kulan Gath’s Powers and essence reside in an enchanted amulet/necklace. His spirit can safely reside within the amulet if his body has been destroyed. This allows him to possess and transform whoever wears it into a likeness of himself, making him effectively immortal. However, this influence can be resisted by those possessed of a sufficiently powerful will.

If the necklace is properly contained or abandoned in a sufficiently remote area he is trapped without the means to influence the outside world.

While in Kulan Gath form he can cast rejuvenating spells on himself that keep him healthy. Yet he is still unable to transform himself into a younger physical form except by illusion.

Kulan Gath looks like an ancient priest clad in a grey robe, golden bracelets, ornamental shoulder pads and miter hat. His brown-skinned body appears to be far older than any mortal man’s, giving him a zombified appearance. His eyes are glowing with power and his nasty smile is pure evil.

Around his neck he wears a beautiful, golden, mystical necklace. This is the amulet to which he has bound his lifeforce.

Before his first death, he appeared to be a handsome man with Egyptian or perhaps Indian features.

Few men can compare in pure evil to Kulan Gath. His diabolical ruthlessness is usually a shock for his enemies. In many respects he is more evil than the demons he summons. He hates do-gooders with a great passion and enjoys taunting everyone with black magic.

He will, of course, bring great vengeance on those who have stood against him or fought him. This will include thorough torture and possibly crucifixion. Unusually enough he is sufficiently powerful enough to do this to Marvel’s heroes.

When transforming Manhattan Island into a Hyborean world, he chose to exclude Spider-Man from the effects so that Spider-Man could remember everything. Then he would be trapped and hunted at Gath’s pleasure.

His goal seems to be to rule a dark, magic world of his own creation with an iron hand. He intends to have his old castle, a throne and a court of minions and guards, as well as a harem of women and prison dungeons with trapped and tortured heroes. He enjoys torture, random killing and sacrifices, in particular children, to the gods.

Despite being a zombie-like sorcerer with serial immortality, his looks are of little importance to him. What is more important is the desire for ultimate power, control and respect.

The barbaric culture of the old Hyborian world suited his tastes just fine. Clearly, he feels out of place in the modern world. The first thing he tries to accomplish when he returns is to recreate the Hyborean world by magical means, in particular recreating the architecture of the greatest era in Hyperborea.

As the first step in converting the world to his image, he usually builds up an army of mind-controlled, superpowered guards, that he refers to as his Hellhorde.

Gath has one big problem with his current existence. He feels that his transformed city should be the most spectacular city in the world, and yet, it’s a backwater, dwarfed by the modern age. The world is so changed compared to his native time — so big, so noisy, so foul — that it overwhelms him.

Thus, the recreation of the Hyborean world is Gath’s way of coping with reality and life. And so, in retrospect, he feels that he should have reached a final reward in his time. Gone on to become a god. But now, the gods are gone, and the gates to their realms have been closed and lost.

Still, he has earned it, and he will become a god in the modern age. He will sacrifice the whole world if that is needed to attain godhood.

“Free ! At last, Kulan Gath is free ! After countless centuries, my destiny is at hand — to make this world forever mine !!”

“Scream, Xavier, scream ! Through you I shall rule the X-Men and the world !”

“There are but three Sa’arpools on Earth. And you have sealed the second – perhaps forever ! All creation is not large enough to hide you from my wrath !”

Demon Ormuz: “You have released me from my fiery prison, sorcerer. I am yours to command !”
Kulan Gath: “Why else would I have released you ?”

Vammatar: “Hmmm. You’ve not aged well this past century, have you ?”
Gath: “A green-skinned sorceress blasted my former body to shreds. When my free-floating atoms grabbed hold of this one, I was in no position to be choosy.”
Vammatar: “Apparently not.”

Gath: “His minions sacrificed every child in the realm, but the frontier remains fixed.”
Beak: “They… killed all the kids ?! What was that supposed to accomplish ?”
Gath: (grinning) “Child sacrifice is how I cast my spell in the first place.”

Somehow Kulan Gath reminds me a lot of Ian Karkull, so perhaps they are the same person in the DCU. They both aspire to immortality, are very powerful and very evil. They are similar enough in many ways to be brothers.

Of course, neither of them would accept rivalry on their power scales, and a war between them could be devastating enough to be an adventure in itself.

Kulan Gath regularly employs an extremely powerful spell, his master spell, that remakes an area equal to a larger city into the Hyborean world. Kulan Gath is most at ease in the old world, and casting the spell is usually the first thing he does when reborn into the world, to create himself an area of power.

The whole area in which the spell is cast immediately becomes a magic area which, in game terms, means that all Rituals are cast at -1 CS OV/RV, and in addition, Gath’s BODY score is increased to 6 APs. In this newly created, magical pocket realm, Kulan Gath is Sorcerer Supreme, and gains an increase to his Sorcery and Occultist scores by 4 APs, as well as 1 AP to each of his Mystical Attributes.

Probably based on the magic of Set, Gath throws his master spell at -2 CS OV/RV due to his high level mystic connection to this entity. This mythic Ritual is not easily described in game terms, but an approximation would be as described above.

The classic enemy of Conan the Barbarian during the Hyborean Era had not yet devised his master spell, “the Hyborean World” spell, and neither was there any need for it.

In addition to the stats above, he possessed Area Knowledge (The Hyborean World) and had the Enemies Drawback (Conan the Cimmerian, Selene the mutant sorceress and many more). He also had the following Connections – Armati the Priestess of Ormuz (High), The demon Ormuz (High), The N’Garai demons (High), Razal Gulath (High).

In classic times, he enjoyed a Bone Dragon Pet:

(Cost equal to a Powerful Connection plus 5 HPs for every two Powers listed).

Kulan Gath has Connections to the following mystic entities: 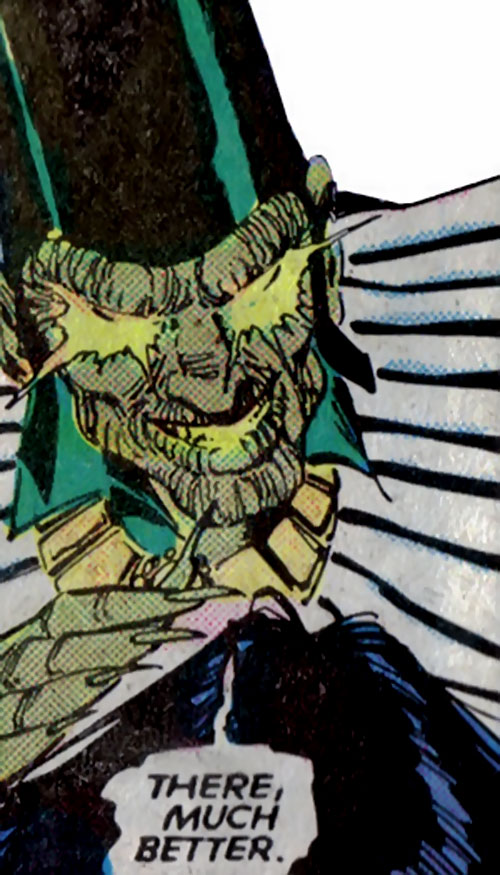 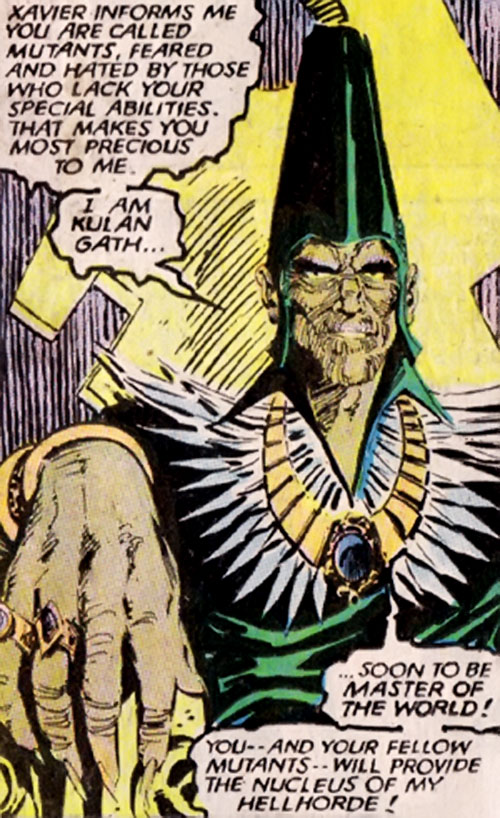 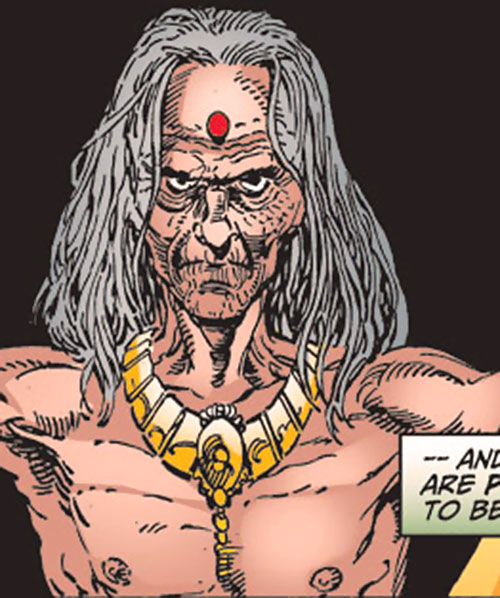 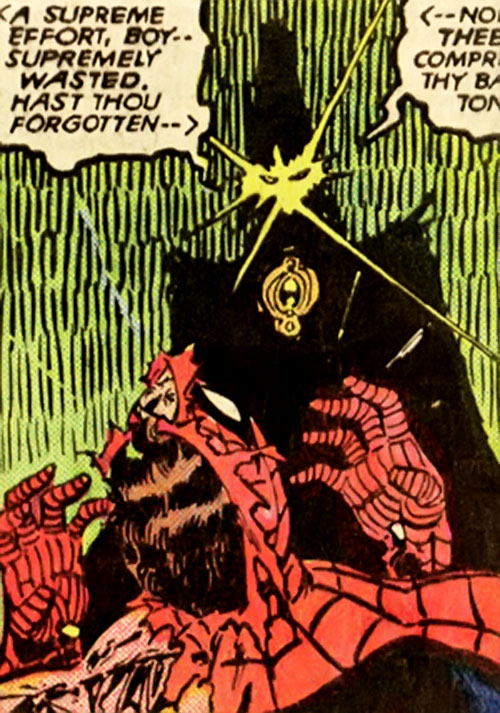 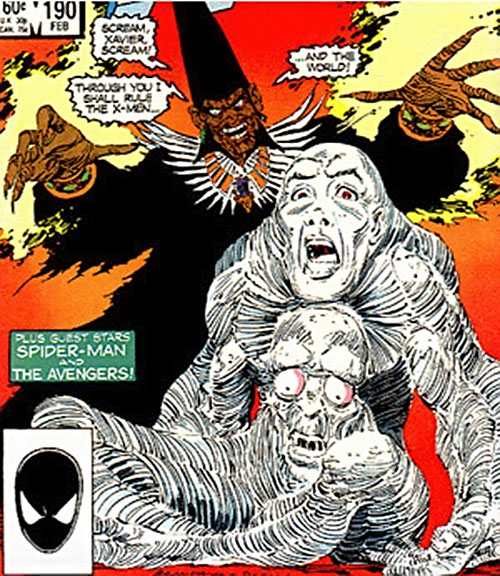 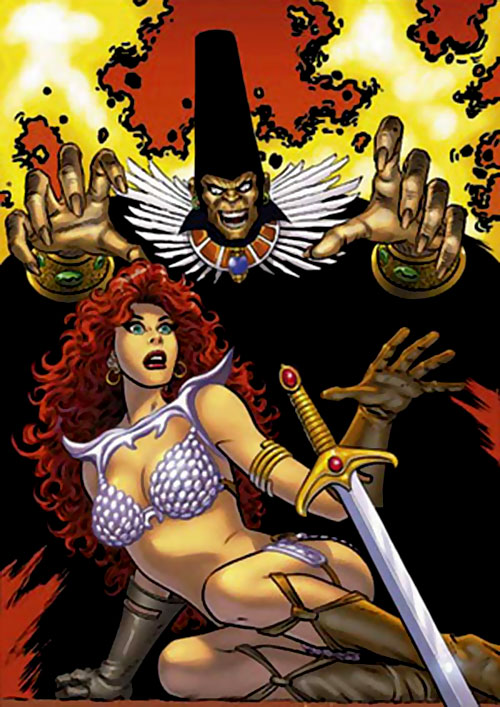