Sky High was a 2005 Disney super-hero comedy/parody movie. One core hook is a special high school for super-hero children. It was well-reviewed.

The Commander is a pure brick . Superhuman strength and superhuman durability are his powers. He does have some leaping ability as a side effect of his strength.

Steve Stronghold lives in what could be described as a Comedy-verse or perhaps a Parody-verse, that being a parody of comic books and the superhero genre.

For better or worse, I think most people who have never read a comic book or those who read them as children but that was 40 years ago think of something like Sky High when they imagine what a comic book is probably like. 40 to 50 years ago, they might have been right.

This is a world in which super powers are quite common and have been for at least several decades. Steve was born in 1957. His father was a superhero.

We are never told his father’s real first name, his superhero code name or what his powers were. We may surmise they were strength and durability as powers seem to be passed on genetically in the “SkyHighverse”.

I like to think his father called himself “The Captain” and Steve’s later choice to call himself “The Commander” was a way of saying he would never consider himself to outrank or equal his father. But I’m just making that part up to fill in the gaps.

We are not told when Steve’s powers manifested but it was at least by the time he was 14 as he states that he could lift a truck by that time. It was also at that age when Steve’s father took him to his “Secret Sanctum” and gave him a set of keys to get in.

Steve later jokes that, in those days, being given the Keys to the Sanctum was literally being given the keys as opposed to later when it was a matter of fingerprint and retinal scans.

Steve attended Sky High school, a school for children with super powers. This was a high-tech facility built by mad scientists and floating in the clouds using anti-gravity technology. 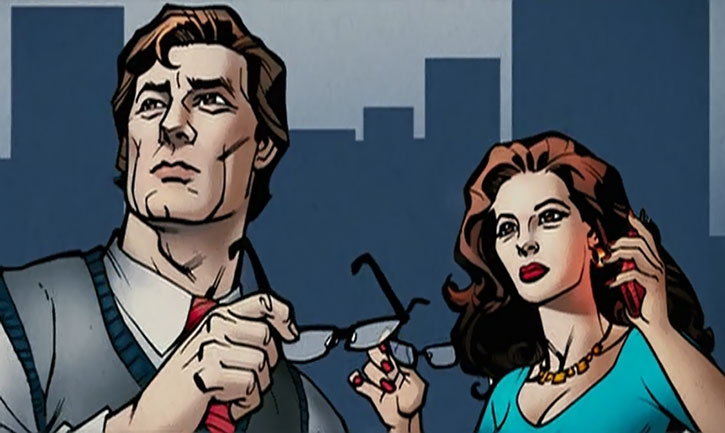 There, students were placed into either the “Hero” or “Hero Support” category based upon their powers. Steve easily qualified as a hero.

Some of his classmates included:

Although Steve knew Josie in high school, he seems not to have known her that well. When they met later, it took him a moment to recall her name. It may be he was a senior when she was a freshman.

He seems to have breezed through school with awards for athletics as well as academic and social achievements such as science and math awards as well as being Homecoming King and Class President.

In spite of these achievements, his later knowledge of science and technology seems to be very little and his intelligence seems average at best. He later lamented that he had an ongoing rivalry with Barron Battle and was miffed that Battle beat him out for the lead role in the musical, “Oklahoma”.

The tradition at Sky High was that, by graduation, a hero would select his codename and costume with help from advisors. He would also be paired with a sidekick/ hero support person.

The sidekick’s costume and codename would be designed to reflect the Hero’s name and costume (and to avoid color clashes). 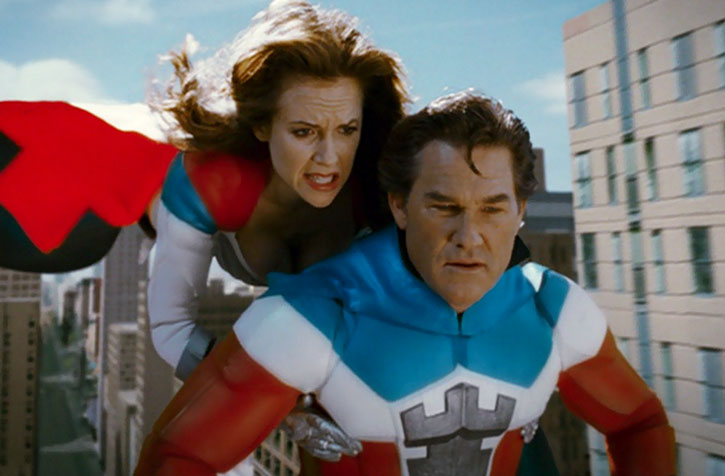 Steve chose the name “The Commander” and a red, white and blue costume. His sidekick, Jonathan, who was a non-powered adventurer of very high skills, became “The All-American Boy” with an appropriate costume.

It seemed the partnership was not a happy one for Jonathan. Steve simply had no life experiences to make him aware of how demeaning the existence of a sidekick student was at Sky High. Jonathan saved his life in one adventure though we don’t know the details. But Steve did not realize how aloof he was.

In 1985, the Commander and the All-American Boy were captured by a new super villain called Royal Pain. He wore a suit of powered armor and had a gun called the Pacifier along with a sidekick called Stitches. Unknown to anyone, the voice was synthesized to sound like a deep, masculine voice. Royal Pain was really Sue Tenny.

She was furious at having been relegated to Sidekick status. She was a “technopath”, able to understand and rearrange technological devices at will.

But back in her school days in the 1970s, the school had never encountered such a power. And so she was assigned to “Hero Support” and thrown in with the “science geeks”. Her plan was to develop a weapon that would turn people into babies. 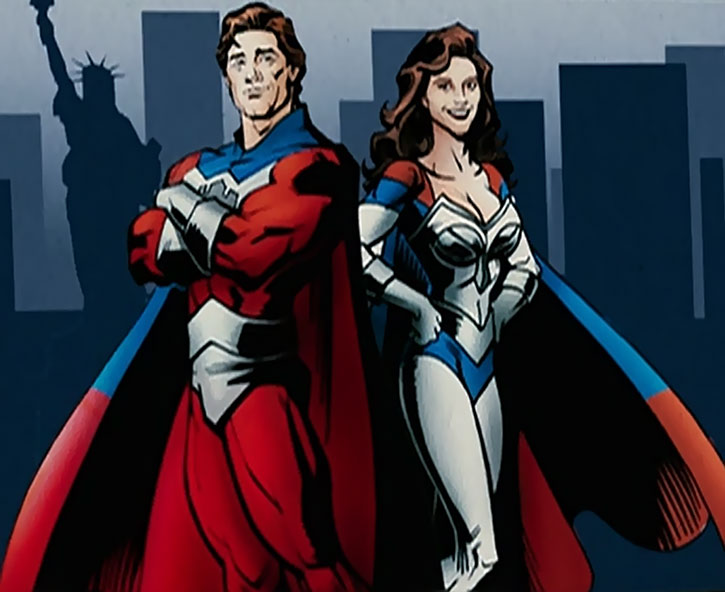 She planned to use it to degenerate all of her old classmates into babies and then raise them in her own school, a school for super villains.

The Commander thought Royal Pain had been disintegrated. But she had really been turned into a baby. Her sidekick, Stitches, grabbed her and got away in the confusion. He raised her. It seems that, as she aged, her knowledge of who she was gradually returned.

Steve and Josie had not seen one another since High school. Josie said she was currently working as a Real estate agent. Steve commented that he too decided to do the “Secret Identity gig”. He said he was currently doing the “Cub reporter cover” but was thinking about switching to the “Millionaire Playboy cover”.

He had not considered real estate but, to spend time with Josie, decides to tag along and considers using that cover. He forgets all about the All-American Boy who is still bound and leaves him to escape on his own. The Commander and Jetstream soon become a boyfriend- girlfriend and later husband- wife team.

Having effectively been abandoned, the All-American Boy becomes a teacher in the Sidekick classes at Sky High.

The story then jumps to 2005. Steve and Josie have a 14 year old son named Will.

Steve looks forward to Will starting at Sky High and eventually joining the team as “The Stronghold Three” as it seems the entire super community, heroes and villains alike and prominent citizens such as mayors and the president, know the heroes’ identities. It seems only the general public doesn’t know.

The only problem is that Will has no powers and is hiding it from his father. 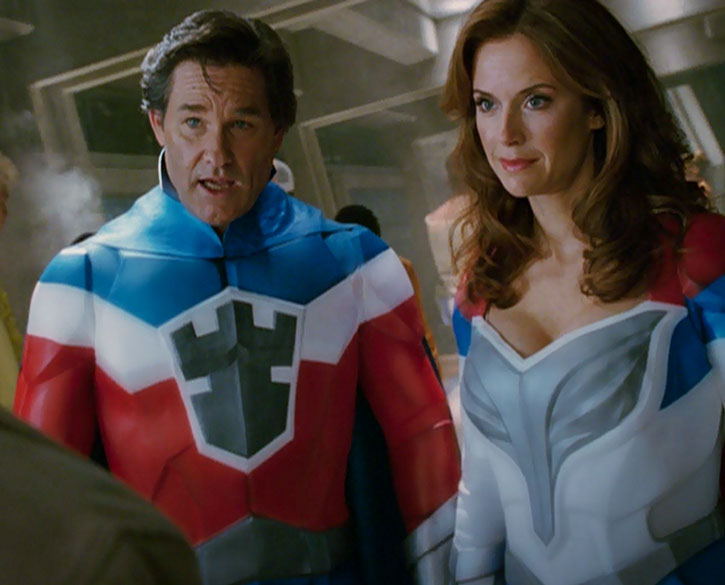 Steve feels incredibly disappointed when Will finally tells him the truth. Steve never seriously asked for evidence that Will had super strength and always just assumed Will would inherit his powers. But Josie convinces him that they will still be a great family.

Steve still holds out hope that Will is just a late bloomer and his hopes are fulfilled when Will soon manifests super strength during a fight in school against the son of Steve’s old nemesis, Barron Battle.

Things seem even better when Will introduces them to Gwen Grayson, a technopath who is also Student President and in charge of the Homecoming committee. She invites Steve and Josie to be the Guests of Honor at Homecoming. But Gwen is really Sue Tenny alias Royal Pain and she has spent years setting them up.

A robot they defeat was one she built and she intended it to lose because she knew the Commander would take the power source as a trophy. She dates Will and manipulates him to get into Steve’s Secret Sanctum and get the Pacifier.

Finally, at the Homecoming dance, she reveals herself. Royal Pain uses the Pacifier to turn the Commander, Jetstream and all of the adult heroes into babies. Luckily, Will and his Sidekick friends defeat her and save the day.

Steve learns a valuable lesson from this, declaring that there should be no sidekicks as they are all heroes. Although never directly apologizing to the All-American Boy, his contrition is clear when he includes the adult former sidekicks when he refers to them all being heroes.

He and Josie then walk away, leaving things to the next generation.

The Commander is a fairly muscular man wearing a shiny red, white and blue costume but no mask. As Steven Stronghold, he usually wears a suit and always wears his glasses so people will not recognize him as the Commander. 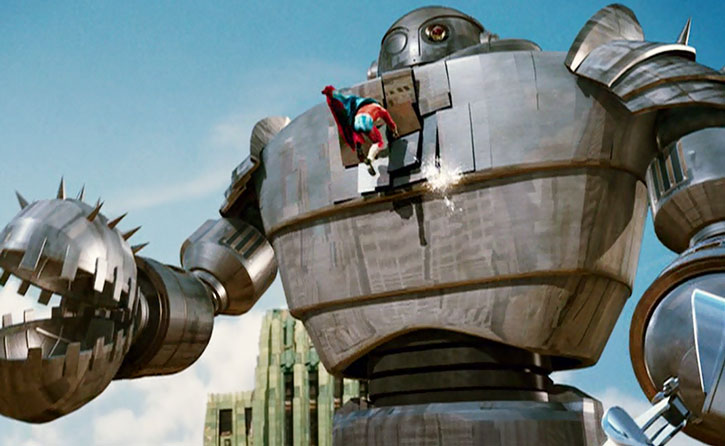 Heroic but not the fastest on the uptake. In spite of having quite a few accomplishments listed in his Senior Yearbook, he comes across as average in intelligence at best and lacking in the way of scientific or technological knowledge.

He has a tendency to pause between words when he speaks or to start to say something that was meant to be profound but instead seems redundant.

“Will, I know every kid thinks that his Dad is invincible and I nearly am but maybe the next time I punch a meteor hurtling toward Earth, I’ll be the one who shatters into a million pieces.”

“Let’s call them what they really are – heroes.”

He is basically his world’s Superman. He and Jetstream are said to be the two most powerful super beings on the planet. If so, it is a very low-powered world. He could fit into the DCU.

Like Plastic Man, Lobo and the early Post-Crisis Justice League, he could show up and meet Superman when they want to do a crossover into comedy land. Or he could just encounter Plastic Man, Lobo, Guy Gardner and other generally comedy characters.

Another possibility is to treat his world the way Earth-S was sometimes treated, as an alternate reality operating on a far more four-color  level.

Connections:
His father (High — though never named, his father was stated to be a superhero who gave Steve access to his headquarters and was clearly ready to jump in and help him).

Note:
Steve and Josie were not married at the beginning of his career but the earliest we ever see them is when they are about to start dating. Plus I needed the blasted Married drawback to get this down to 450 points. Sounds like a Player-character already.

It was also a situation where he knew exactly where to hit it and the robot was designed to lose. So I had to be a bit arbitrary.

I also decided to make up two versions of the Commander. The first is what he might have been at the beginning of his career and the second is what he was in the movie.

The first version is a 450 pt. character that could be used as a Player-character in an actual game which was the whole point of doing it, to see if a basic version could be done on the starting points usually allocated to original Player-characters.

Source of Character: The Disney movie, Sky High. The Commander was created by Paul Hernandez, Bob Schooley and Mark McCorkle and was played by Kurt Russell. 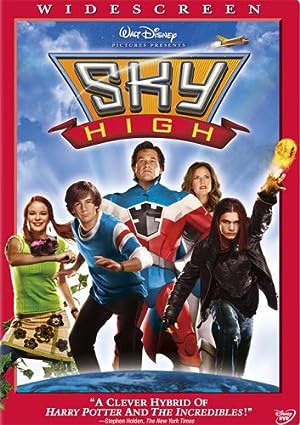 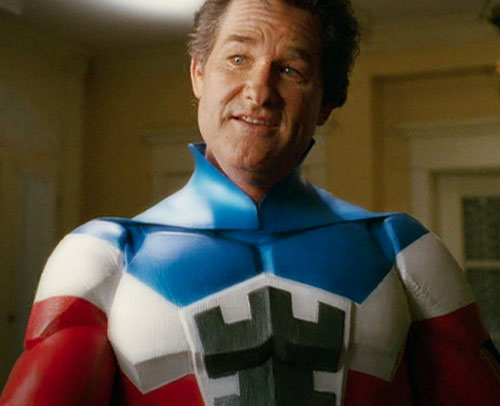 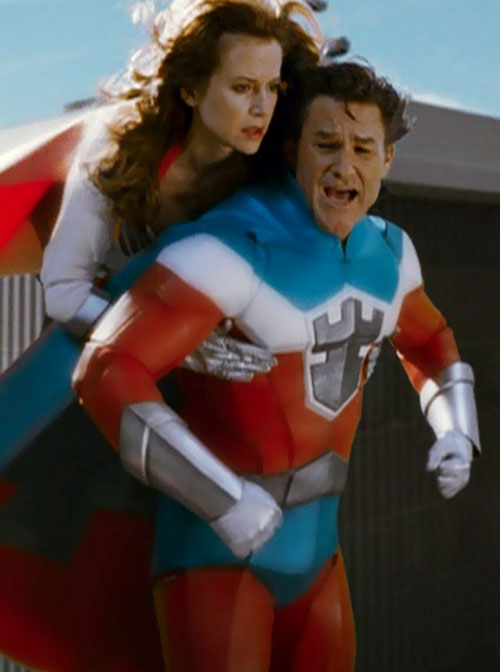 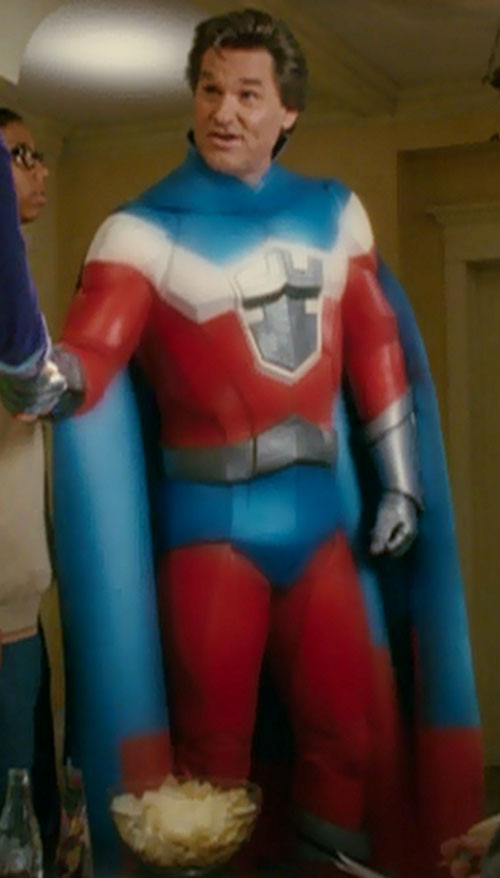 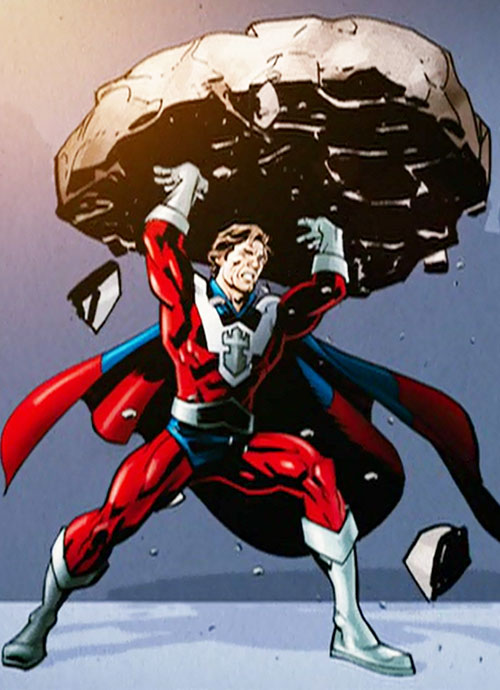 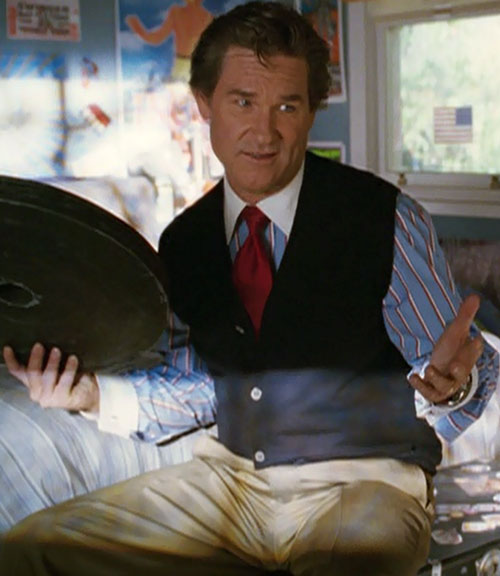