As a mystic avatar, Kwai had numerous magical abilities, including flight and healing powers.

She was also a skilled fighter.

Nina Lam is the latest incarnation of Kwai, a mystic avatar. Throughout her incarnations, Kwai has fought her evil sister, the Demon Fox.

Eventually, Kwai decided that she had to leave the Syndicate and meet with her family. She traveled to her homeland, the Kingdom of Kwen Lun. There she met with her friend, the Monkey King. She then asked her father, the Jade Emperor, for another life, but was sentenced to death without reincarnation.

The Monkey King sought out the Syndicate and sent them to rescue Kwai while he fought the Jade Emperor. The Syndicate returned with Kwai and the Demon Fox. In a battle royale, Kwai finally destroyed the Demon Fox, dying in the process. After Kwai’s death the Syndicate decided to break up.

When the Blood Syndicate reformed, Kwai was with them again. It is unknown how she returned to life or if she is again possessing Nina Lam. 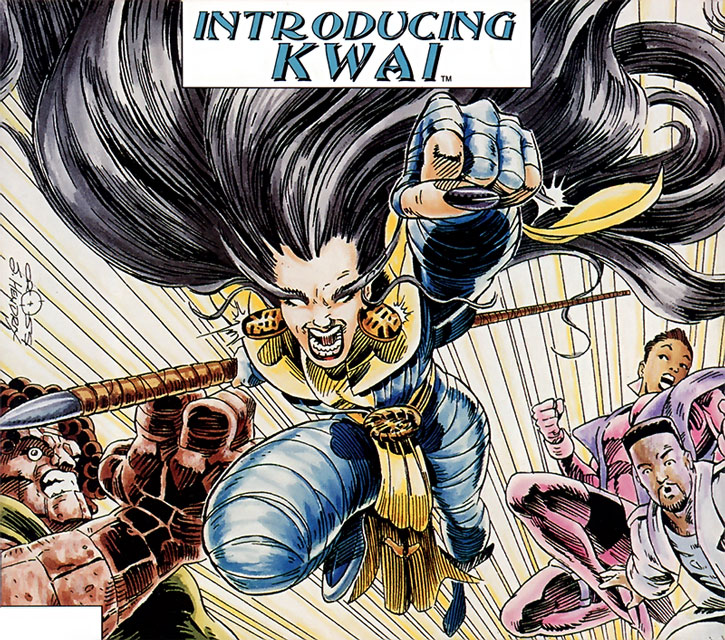 She wore a blue body wrap with white shoulder panels and a yellow sash, blue gloves, yellow wrist wraps, and ornate earrings. She usually carried a wooden spear with her.

Kwai was a kind-hearted woman, though frustrated by the fates that kept her in perpetual battle with her evil sister.

“It can’t be helped… but you’ll get over the shock. They always do.”

“You innocents are always in the way.”

“This is not such a bad life. I’ve found friends early… and refound an old friend. Truly I am blessed.”

Kwai and the Blood Syndicate can dropped into any urban area where gang activity plays a major role.

Kwai can be used individually as a mystic guardian or as an assistant to a more established mystic character.

Advantages:
Expansive headquarters (The Factory, though the Blood Syndicate may have a new base of operations after its disbanding and subsequent reformation), Iron Nerves, Languages (Cantonese, Mandarin), Lightning Reflexes, Pet (Pearl).

By Kynn Bartlett, edited by JD.