Taylor is a well-trained, talented S.H.I.E.L.D. agent. She has noticeably above-average athletic and markswomanship skills. In fact, she seems to be a trained acrobat and combat driver.

Agent Taylor thinks on her feet pretty well, but as a rookie she’s too eager and emotional.

Nothing is known about Kym Taylor’s biography before she joined S.H.I.E.L.D. in the 1990s. In 1996, she appeared as a relatively inexperienced agent. Taylor had been detailed to the protection of Reverend Connover. Connover was a well-known Christian voice for mutant rights, and as such was at risk from anti-mutant extremists.

Mr. Connover was indeed threatened by the second Mutant Liberation Front. This version of the MLF was an anti-mutants organisation using technological means to pass themselves for mutants. Their agenda was to stir up hatred and murder their ideological opponents.

This in turn meant the intervention of the Punisher, who was at that point waging a war against the MLF terrorists.

Taylor tried to arrest the Punisher, who at that point was thought to have murdered Nick Fury. However, she was ordered to stand down and cooperate with him to ensure Connover’s security. Her superior, G.W. Bridge, also ordered her to cooperate with the FBI, represented by Agent Carl Denti (secretly the X-Cutioner).

Being a Nick Fury fangirl, Taylor was furious to have to cooperate with his apparent murderer. Howbeit, the repeated assaults on Connover by seemingly superhuman operatives did not leave her much room to protest. Along with the much more experienced Punisher and Agent Denti, they managed to stop several MLF agents, though Taylor committed a few rookie mistakes.

As the team moved Connover throughout the country, Taylor overheard the Punisher talking about his roots and the death of his family with Reverend Connover. As a result, she changed her mind about the man.

The Punisher and the two agents kept being attacked by enhanced assassins. Eventually, the speedster  Burnout outmanoeuvred them. Taylor resorted to their backup plan and tried to exfiltrate the principal with a souped-up S.H.I.E.L.D. motorbike. But Burnout caught up with her and slashed her front tyre, sending Taylor flying and kidnapping Connover.

Taylor was hospitalised. Still, she was lucky and emerged from the crash with but a major concussion.

Taylor checked herself out of the hospital sooner than reasonable. She wanted to join the Punisher in his attempt to recover Connover. The Punisher and Denti successfully executed on their plan to have Denti captured by the MLF. Afterwards, Taylor briefly kissed the Punisher to thank him for helping her focus and broaden her perspective.

During the assault on the MLF’s compound, Taylor stormed the security centre. From there she gave evacuation orders over the PA system so the non-combatants would be out of the line of fire. She then tried to rush in to support the Punisher, but had to be teleported out by the X-Cutioner so she wouldn’t be caught in the self-destruction procedure of the base.

The Punisher was thought dead in the explosion. 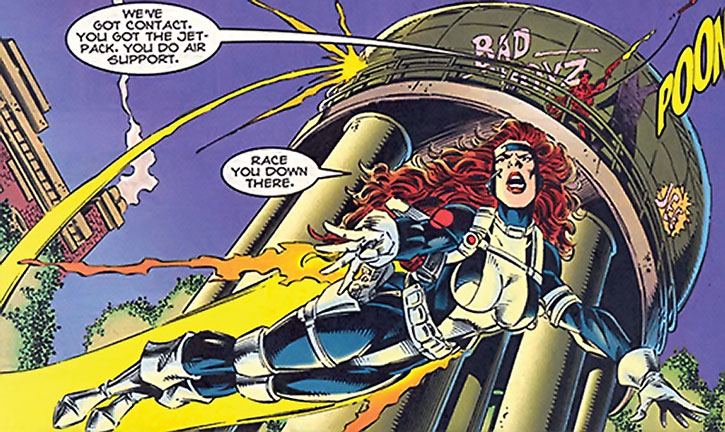 Unfairly kicking herself hard for not having been able to save him, Taylor was then assigned by Bridge to support the Black Widow on an undisclosed mission. She hasn’t been seen since.

Given her obvious admiration for Nick Fury, and assuming she’s still alive, she likely joined the 1,200 recruits who formed the Howling Commandos PMC Fury set up after S.H.I.E.L.D. was turned into HAMMER.

How she manages to pass that hair through S.H.I.E.L.D. regulations is unrevealed.

Agent Taylor is well-trained and a professional. But when she was seen, she was still lacking experience and focus. Since she seemed smart and dedicated, she presumably has progressed quickly and with experience may now be a top-notch agent. 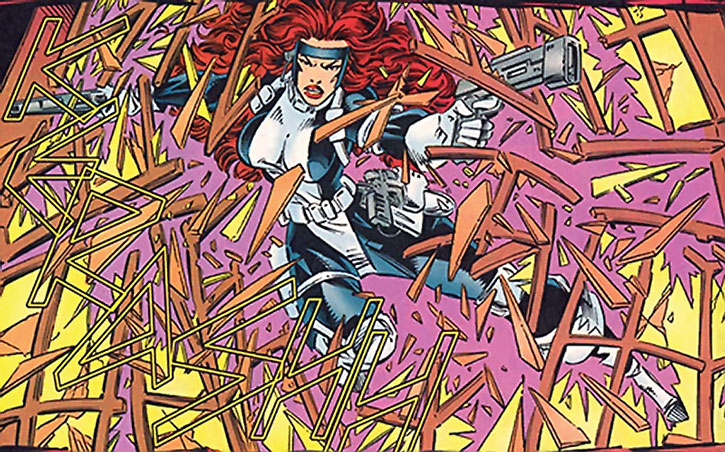 Though there was little space for characterisation to emerge, Taylor seemed to be a Nick Fury fangirl. She wanted to emulate him and honour his memory. She watched all his instruction tapes several times, occasionally hollered orders and threats straight from the WWII records about Sgt. Fury, etc..

Her reverence for the great man could be played up, especially if she got the chance to actually meet him.

Taylor melted over for the Punisher, for unclear reasons. Presumably she eventually put that behind her.

Taylor: “Tell me again — this is all going exactly as you planned ?”
Punisher: “Oh yeah.”

(Trying to channel Nick Fury) “Awright, ya yellow-bellied morons ! S.H.I.E.L.D.’s here and taking over ! So one side ! And count yerself lucky we’re using mercy slugs this time !”

Equipment:
Taylor has access to a fair bit of S.H.I.E.L.D. gear: 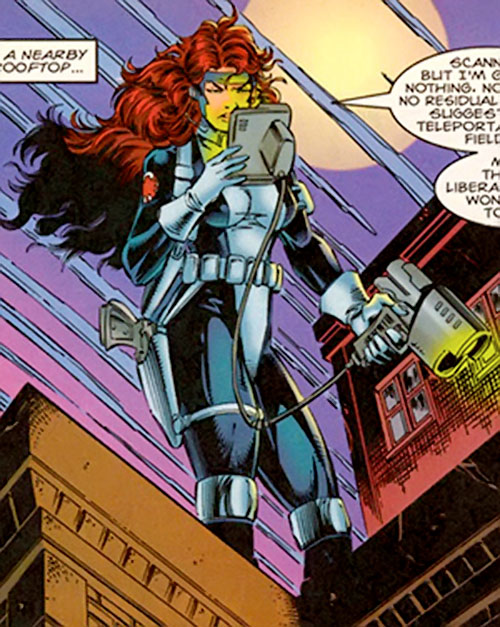 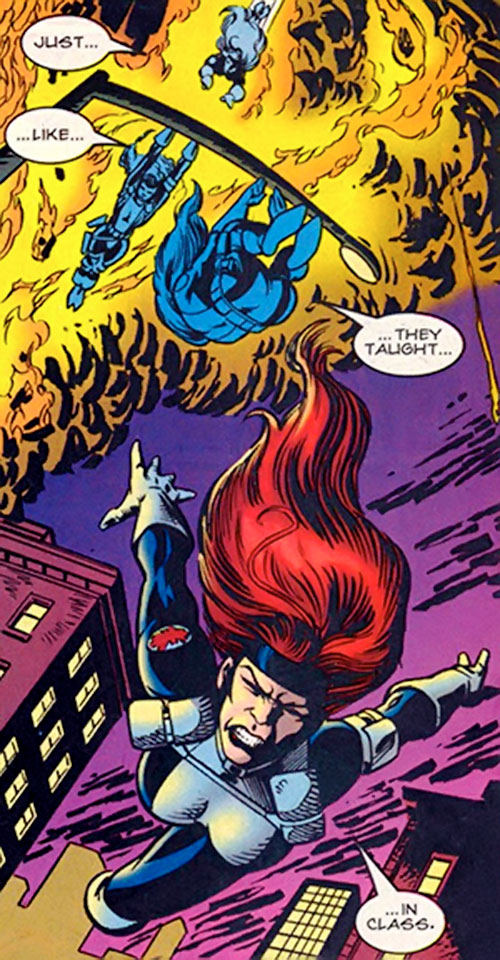