One of the best pilots in the world, Zinda is able to fly just about any aircraft.

She’s also a skilled fighter, although she favours more of a brawling combat style. Furthermore she’s a skilled marksman, usually wielding a pair of .45 pistols.

Determined to become the first female member of the famed World War II Blackhawk unit, Zinda Blake learned to pilot a range of aircraft, and trained herself in combat and weaponry. 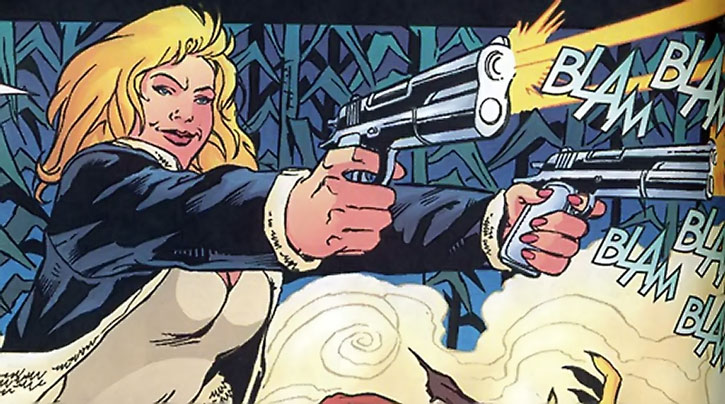 Despite their rules forbidding female members, after Zinda had saved them a number of times, from threats like the Scavenger, they made her an honorary member. She adopted the name Lady Blackhawk.

She became an obsession of the Nazi pirate Killer Shark, who frequently kidnapped her, using a drug to brainwash her into assuming the identity of Queen Killer Shark, battling her comrades a number of times until freed from the effects of the drug.

Afterwards she retained little memory of what happened while under the drugs’ influence, but recalled them the next time she was exposed to the drug. 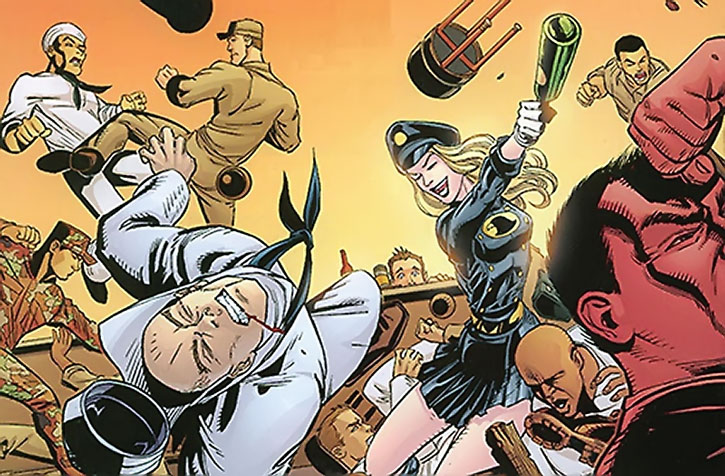 She continued to fly with the Blackhawks through the war and afterwards, until she was caught in a time-warp caused by the Zero Hour event. Stranded in the future, she was accepted into Guy Gardner’s informal team, which included former Green Lantern Arisia, millionaire adventurer Buck Wargo, and the half-human, half-tiger Tiger-Man.

Let’s do the time warp again

As one of the original Blackhawks, she inherited a stake in the modern Blackhawk Inc.. However, they wouldn’t let her fly anything important without going through a long process of retraining.

Thus, Zinda happily accepted an alternative offer from Oracle (Barbara Gordon), to become the pilot for the Birds of Prey. She developed close friendships with Oracle and fellow Birds Black Canary and Huntress.

It was Zinda who suggested the team name. While mainly the pilot, Zinda began to take more of an active role in missions, especially after Black Canary retired from the group. 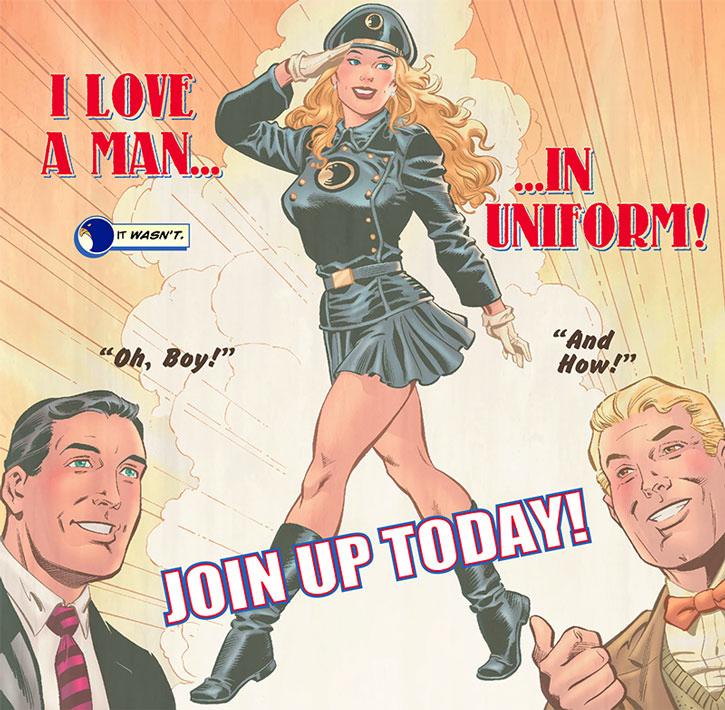 She briefly quit when Spy Smasher II usurped control of the Birds, punching Spy Smasher by way of resignation. But Oracle soon forced Spy Smasher to back off, and Zinda returned to the group.

The shark is a very deadly beast

After a brief encounter with a youthful looking Killer Shark, Zinda tracked him down with Huntress. However, they were overcome and Zinda was again brainwashed into becoming Queen Killer Shark.

Her captor turned out to be the grandson of the original Killer Shark, himself a genius in marine engineering. He had inherited most of his predecessor’s paraphernalia.

His grandfather had not, however, revealed the location of his amassed booty. Therefore, the new Killer Shark drugged Zinda so she could lead him to it. She did so, but managed to break free of his control with Huntress’s help, handing Killer Shark over to the authorities. 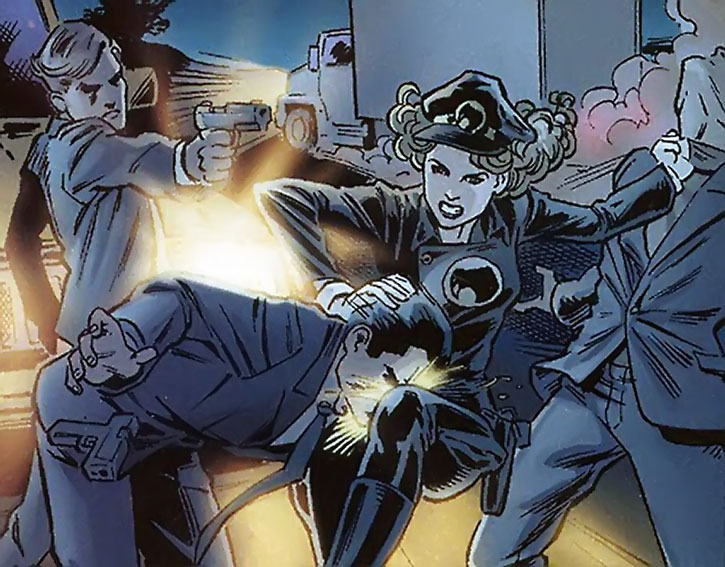 Loud and brash, Zinda has a big personality, enjoying brawling and partying in equal measure. A generous and open friend, and an implacable enemy, she doesn’t particularly like being confined, or taking orders from those she doesn’t like. While she trusts Oracle, she’s resistant to being ordered about by anyone else.

She adapted quickly to the new time period, her only real problem being the loss of her friends. She maintains a cheerfully outgoing persona, though, dealing with her grief in her own time. 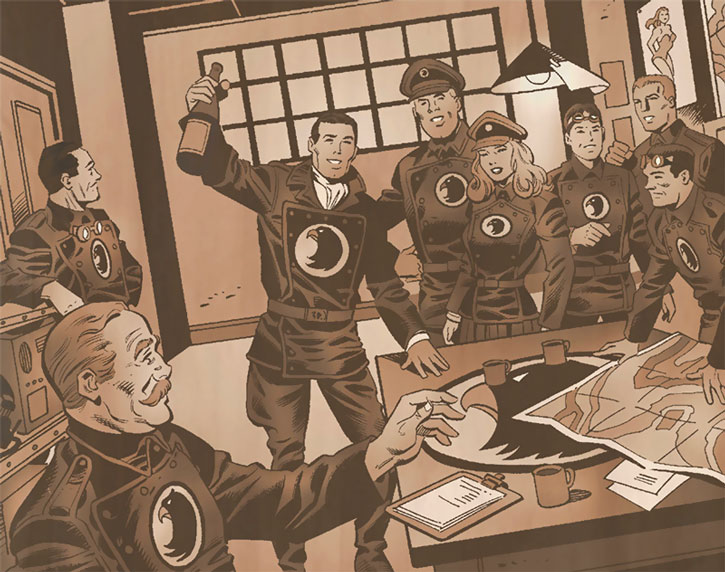 “I don’t like to gossip, but that gal’s gone crackers.” 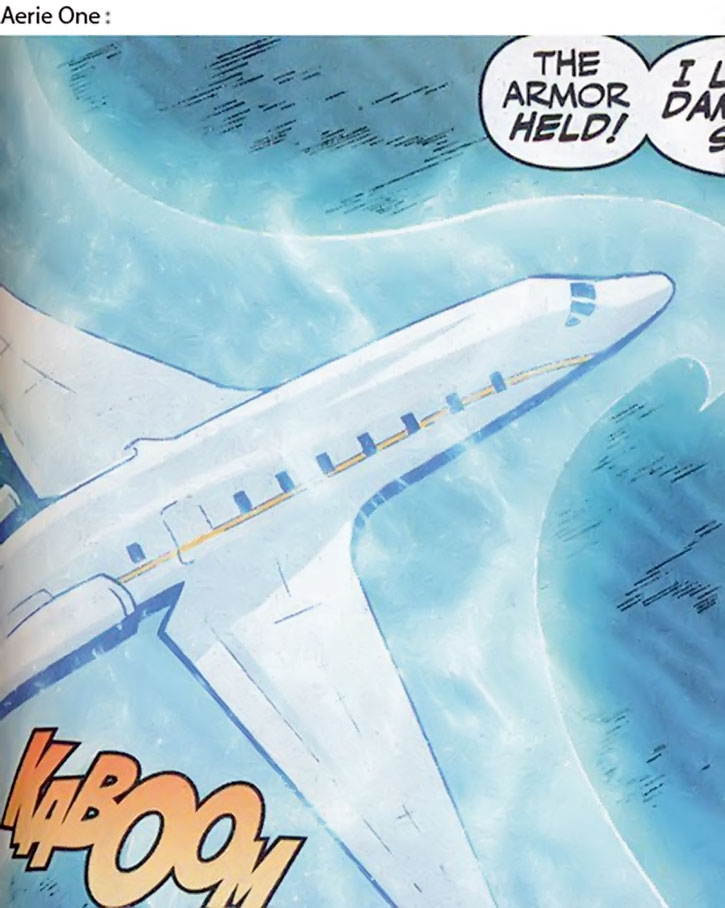 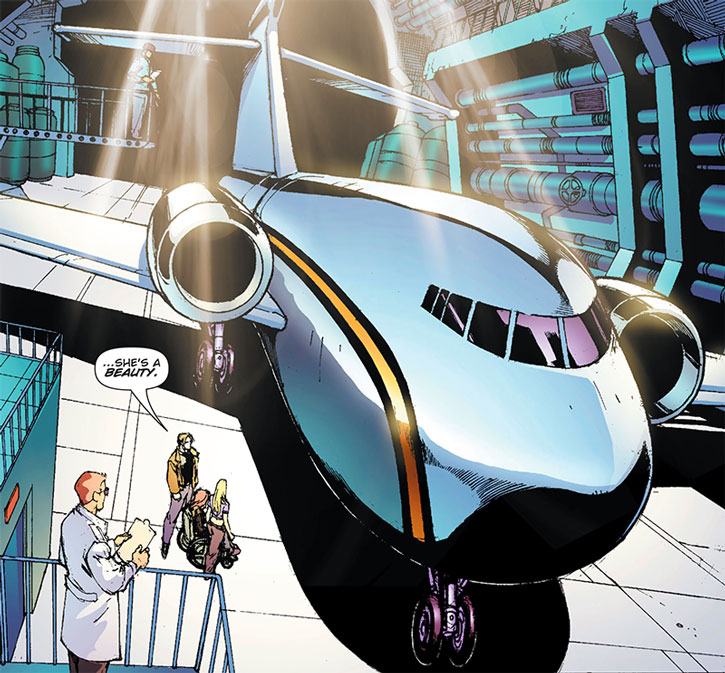 Source of Character: DC Comics (covers up to Birds of Prey #118). 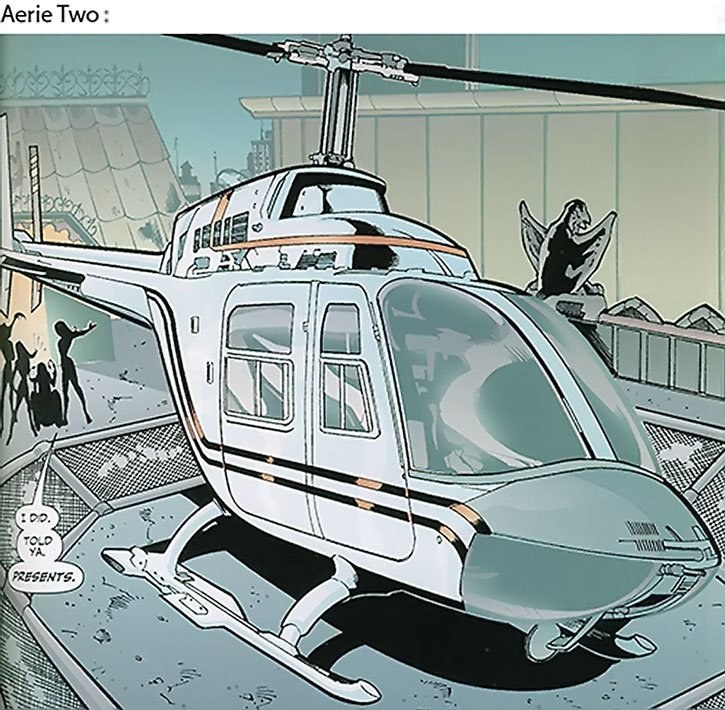 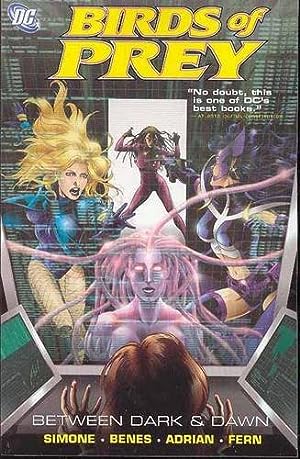 Birds of Prey TPBs – specifically Between dark and dawn, then The battle within, Perfect pitch, Blood and circuits, Dead of winter, Metropolis or dust 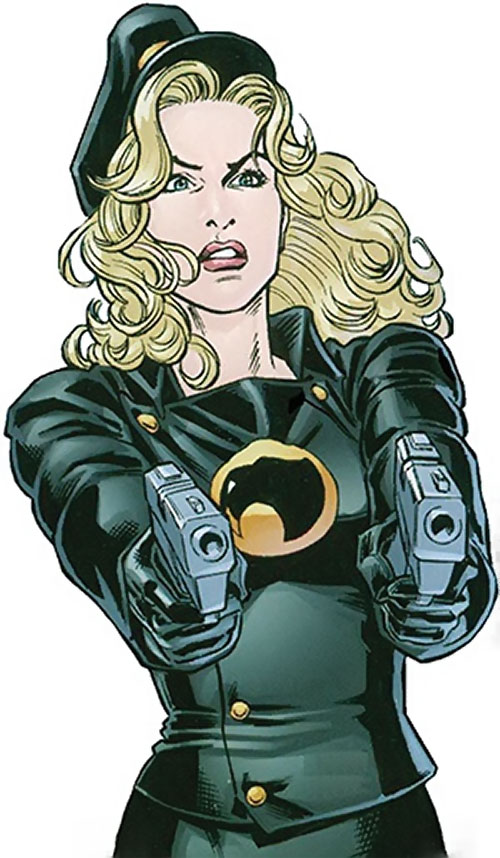 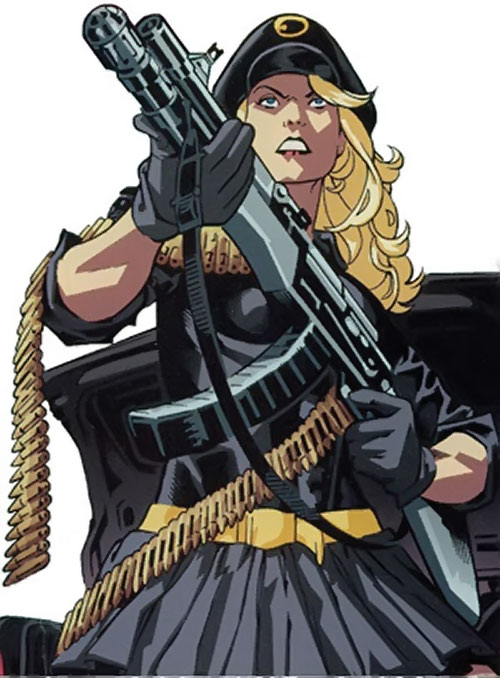 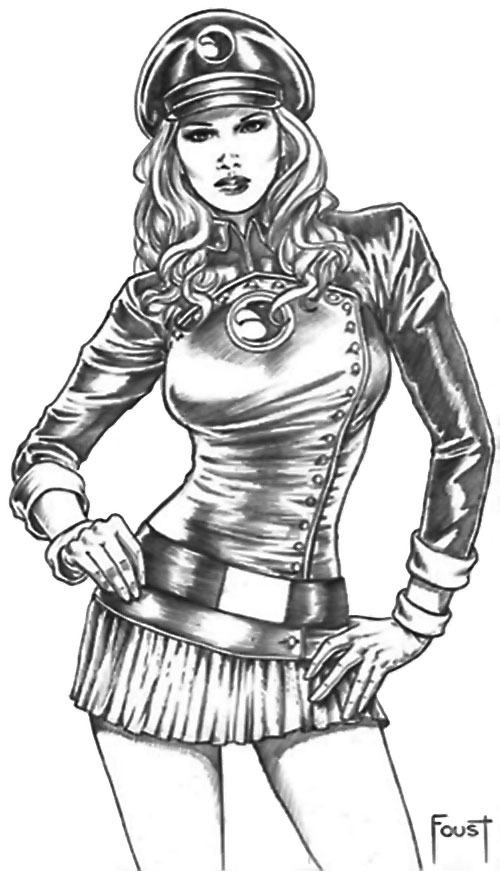 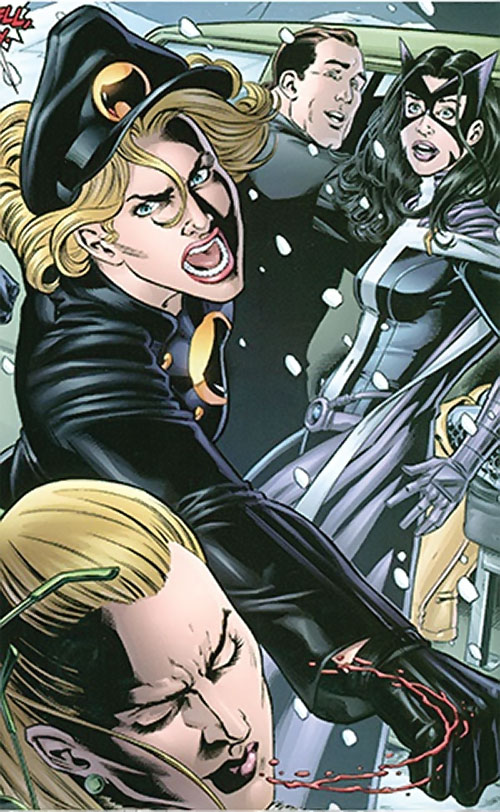 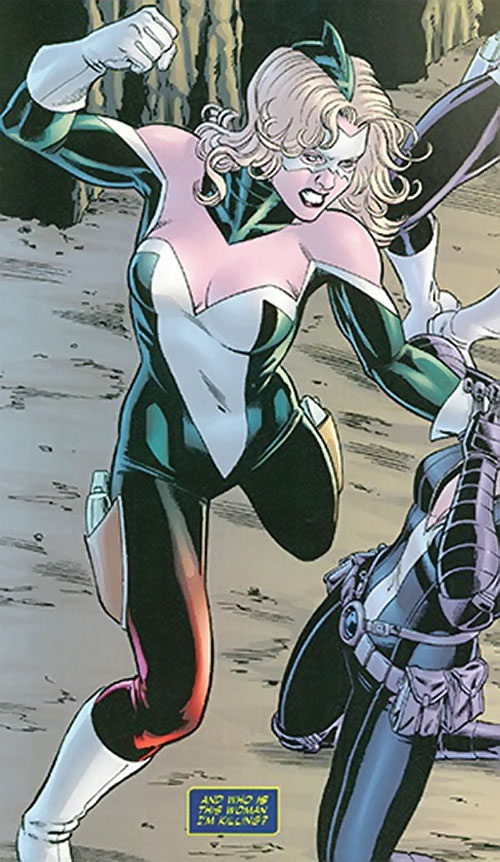