A highly skilled martial artist, Lady Bullseye is proficient in a number of weapons, especially thrown ones. However, she hasn’t exhibited Bullseye’s skill at turning anything into a deadly missile.

She has very little scent, and absolute control of her body and pulse. She can remain absolutely calm in combat. When in disguise was able to fool even Daredevil’s senses — even when he suspected it was her — by having a completely different pulse rate and demeanour.

When Bullseye slaughtered Yakuza slave traders while on a job, he paid little attention to their merchandise. One of the merchandise was mesmerised by him, the spectacle overwhelming the girl’s fear of the fate awaiting her.

Stepping from the destroyed cage after Bullseye had passed through, she was confronted by a surviving slaver. She slit his throat in a single stroke, and walked out.

Found by Master Izo, he took her on as his student. After years of training he had her infiltrate the Hand, working his machinations with the promise that she’d become leader of the Hand.

Working for the Hand lord Hiroshi, Lady Bullseye remained an outsider. She operated as his lieutenant, but it was only her skill that saw her accepted. His plans took them to New York, which she considered Bullseye’s city.

Some of her actions displeased Hiroshi. In is view he took too much initiative – though she was actually following Master Izo’s schemes under the guise of serving Hiroshi. She acted a bit too strongly against Daredevil (Matt Murdock) before they were prepared to, and fought him just to see what it was like. 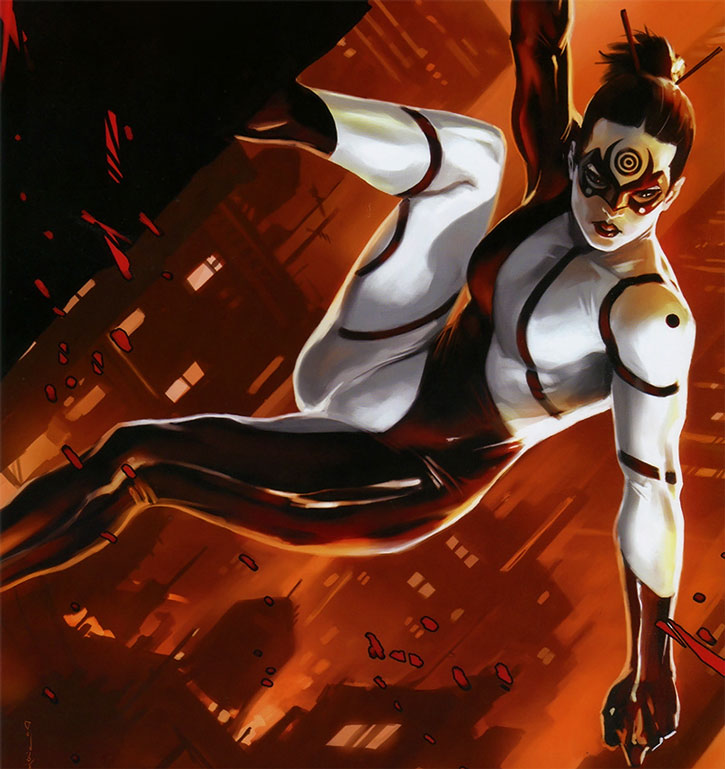 As part of the plan to alienate Murdock from all around him, Lady Bullseye adopted the identity of lawyer, Maki Matsumoto. She represented the parents of Murdock’s mentally-ill wife, Milla Donovan, who were suing to gain custody of her.

Her acting skills were good enough that even though Murdock suspected who she was, his senses couldn’t confirm it.

She killed and resurrected the White Tiger, making her loyal to the Hand.

Continuing to implement the plans of both Hiroshi and Izo, she offered Murdock leadership of the Hand. He refused. 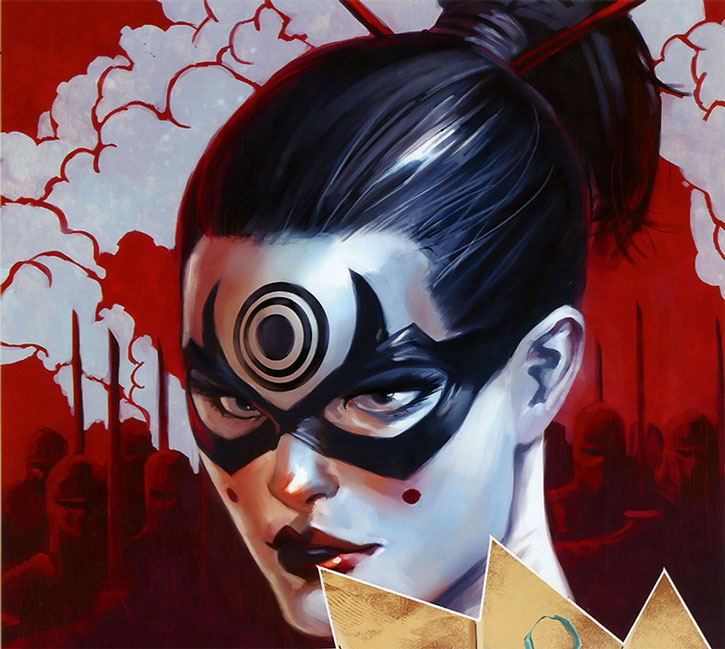 She was then dispatched to Spain to recruit their alternative: Wilson Fisk, the Kingpin. She had his lover and her children killed to entice Fisk back into the game. She stabbed Fisk and left him there, telling him he was a message for Murdock.

After Fisk demanded leadership of the Hand, Murdock reluctantly accepted the role, intending to reform them. One of his first commands was to banish Lady Bullseye. She confronted Izo in private, claiming he’d used her.

He admitted it, taking her threat of vengeance with little care, already having so many enemies.

With little else to do, Lady Bullseye followed her idol in becoming the Kingpin’s main enforcer. She helped him agitate events when the Hand took over Hell’s Kitchen from their Shadowland castle.

Lady Bullseye also enabled Kingpin to get into position to take command of what remained of the Hand after Murdock fell.

She continued as Fisk’s enforcer, partnering with Typhoid Mary when Kingpin tried to take over the Wakandan bank. She clashed with both Black Panther (T’Challa) and Black Panther (Shuri) in so doing.

Lady Bullseye also clashed with the Young Masters when they tried to take Bullseye’s dead body. She killed one of their number in the process.

She then took the body, for reasons probably best not dwelt on.

Eerily calm and usually detached from the moment, Lady Bullseye rarely gets angry. Even calm she has little compunction killing anyone who gets in her way. 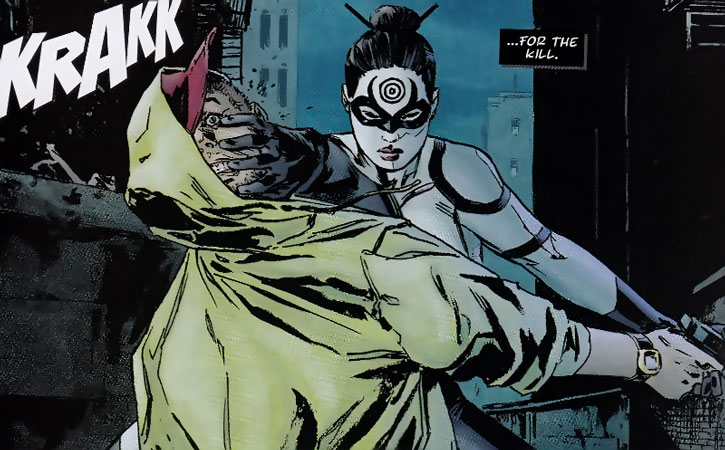 She’s fascinated by the repercussions of violence. She often observes from hiding the fallout violence can have among those close to the victim.

She doesn’t like being touched by men without her permission, and kills any who do so.

“Understand this, ninja… I have no master ! And your mistake ? It was putting hands on me.”

“Children at play. You have no rights to claim here.”

“The Kingpin did not send me. Whoever you are… you can rest assured you are not on his radar. But now… you’re on mine.”

Bonuses and Limitations:
Invisibility is a Skilled Power (+1), and only works against olfactory detection (BC -35, FC -3).

Some of her weapons are rigged with explosives, so she can hurl her swords as grenades if pushed [Bomb: 05].

While she does pretend to be a lawyer for a certain length of time, there’s no evidence she knows any law beyond what was required for the role. Since she wouldn’t want to be caught flat-footed, she may have as much as and Expertise in US legal matters concerning guardianship of the mentally ill. 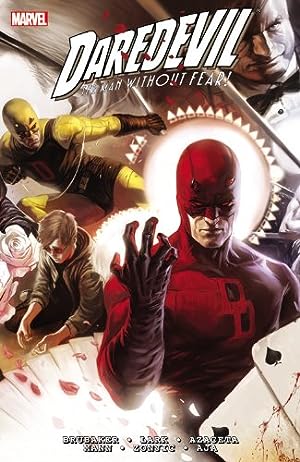 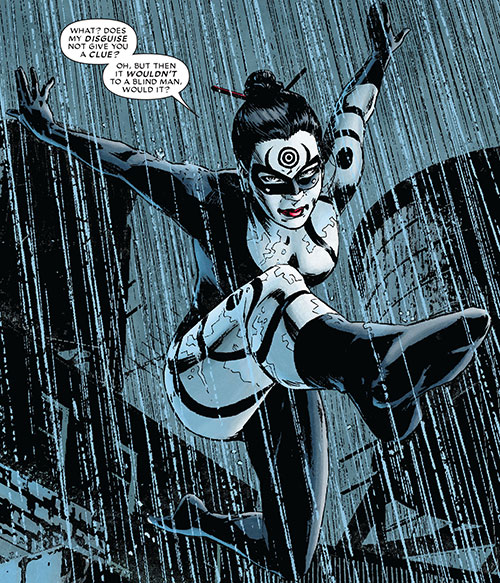 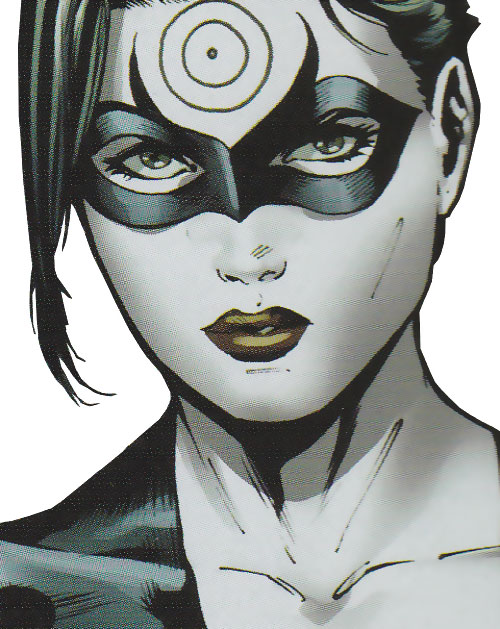 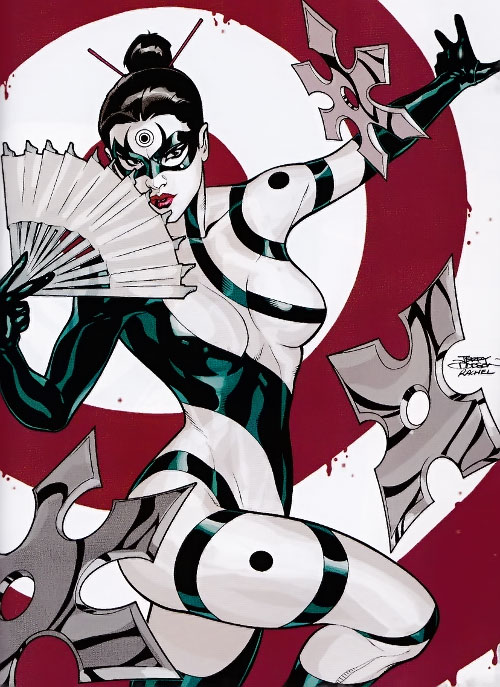 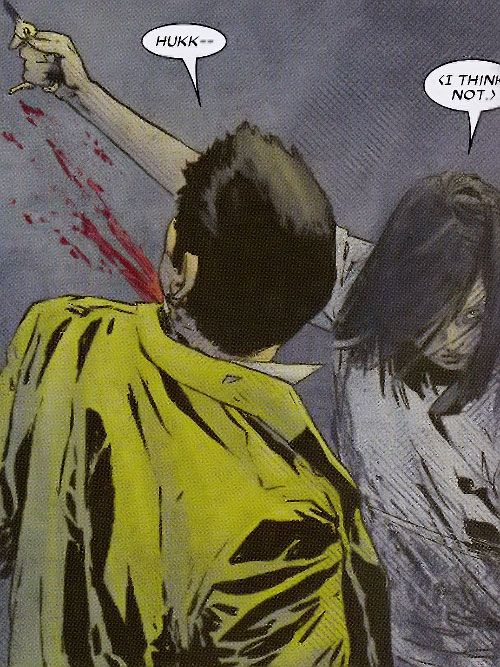