Lady Cop was a story by my belief-defying dark nemesis, the dreaded R. Kanigher, in 1975. It was in First Issue Special, a brief-lived DC Comics book where every issue attempted to launch a new character.

Odd as it may seem to younger readers, the notion of female police officers was still controversial back then.

Though the vast majority of First Issue Special characters did not stick, the Lady Cop protagonist did make an out-of-the-blue return in 2007.

Women on the force

Matrons have been serving in ancillary roles (such as searching female prisoners) on the force since the XIXth century. But women have served in a fuller capacity with the NYPD since World War One.

This was caused by the war – both the presence of soldiers in New York, and a lack of manpower as young men joined the military. This made it necessary for the NYPD to be surprisingly progressive.

Thus, a small number of (armed, but not uniformed) lady officers were tasked with protecting young women from “corruption”. This apparently meant young women being seduced and/or abused by soldiers training in the New York area before being shipped off to Europe.

In 1930 a special bureau for female officers (the Bureau of Policewomen) was established. Policewomen assigned to the Bureau :

Each policewoman carried her own .32 revolver.

By the 1960s, after Civil Rights trials, women gained the right to pass exams to become Sergeant, and later Lieutenant and Captain. By 1972, the NYPD ran its first experiment with female officers being detailed to full patrol duty.

By the time of Lady Cop, in 1975, hundreds of female patrol officers were on the force. But it still was the first wave, having completed Police Academy training by 1973 at best. There was still significant social opposition to this, especially from the wives of policemen.

Liza Warner apparently was a student when a serial killer broke into the apartment she shared with other young women. The “Ace of Spades Killer” strangled her two roommates while Liza hid under the bed in abject terror. He did not see her. 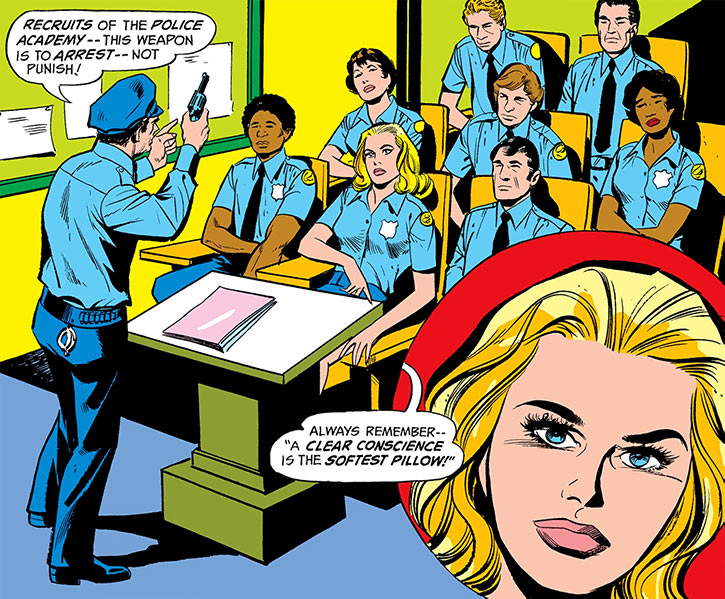 While she was describing the scene to police detectives, she gave them invaluable details about the distinctive boots of the killer. A policewoman, trying to cheer Warner up and help her get over shock, complimented her over her “camera eye”.

The officer also told Liza how she wished they had people with talents like this joining the force.

Realising she would be forever haunted by the brutal murder of her friends until she caught the killer, Liza enlisted at the Police Academy. This had very recently become possible for women. She proved to be an excellent recruit. On graduation day prevented an insane rebuffed applicant from throwing a grenade into the crowd.

She then went on to become a beat officer. Ms. Warner patrolled alone in a regulation skirt and dress shoes in the big city.

Officer Warner then vanished in comic-book limbo . Though one may imagine that she did eventually get the “Ace of Spades Killer”.

In 2007, Lady Cop made her return to the DC Universe. Ms. Warner is now the Chief of Police in the college town of Ivy Town.

Ivy apparently became a very weird place as the presence of the Atom (Ray Palmer) attracted various enemies and phenomena. Over the years Chief Warner became used to running into monsters and mysteries.

Her preferred mode of operation seems to be to only contact State and Federal authorities when absolutely necessary. She prefers to rely on local resources (such as the then-new Atom, Ryan Choi) with whom she has established personal ties.

In 1975, Warner is a dedicated beat officer who genuinely serves and protect. She’s particularly vigilant when it comes to harm done to women and children.

She will routinely do such things as :

Of course, she suffers lots of social pressure and insults about her job. Most people strongly believe women do not belong on the force. Her boyfriend Hal, in particular, would prefer her to quit. Maybe his full name is Hal Trevor.

I come in peace

Officer Warner excels with deescalation techniques. She’ll keep trying to establish communication even in the face of violence. She’s entirely willing to take a few punches and being manhandled without resorting to violence herself.

When she has no choice left, she’ll use the least dangerous amount of force. Which usually means she’ll whup everybody’s behind with her bare hands and some compliance holds. Dirty Harry, she’s not.

Now, realistically, a rookie with these traits would have burned out pretty quickly with the NYPD. But a/ it’s a story about a heroine and b/ it is possible that she got out fairly quickly and became the head of another PD in record time. That certainly would help.

“Cool it ! That girl’s underage ! Don’t you realise I can throw the book at you ?”

“Haven’t you heard ? The Stone Age is over. The dinosaurs are extinct. You can’t club women over the head and drag them away by their hair. But, if you characters would be happier in a cage, I’ll book you. Let’s go !”

“I’m doing useful work for the first time in my life. I’d rather pound a beat than a typewriter.”

“Nina isn’t an animal to be whipped ! She’s the flesh and blood of your wife, too ! What would your wife do if she were here ? Would she drive her own daughter away ?”

Drawbacks:
Misc.: Woman Ahead of Her Time (see below).

A woman ahead of her time

This Misc. Drawback functions pretty much as the Age (Young) Drawback, denoting social pressure and lack of credibility due to her unusual profession.

In the comics she has no equipment except for handcuffs, though she’s remarkably good at catching the blade of small knives with her regulation hat (thanks to her Advantages). On the cover she has a Light Pistol and a Club.

As always for our stats for very low-powered characters, this is not aligned with the impressive stats for generic NPCs in the rulesbook.

Her Expertise is a bit low since she’s fresh out of the Academy, but it’ll undoubtedly rise quickly. 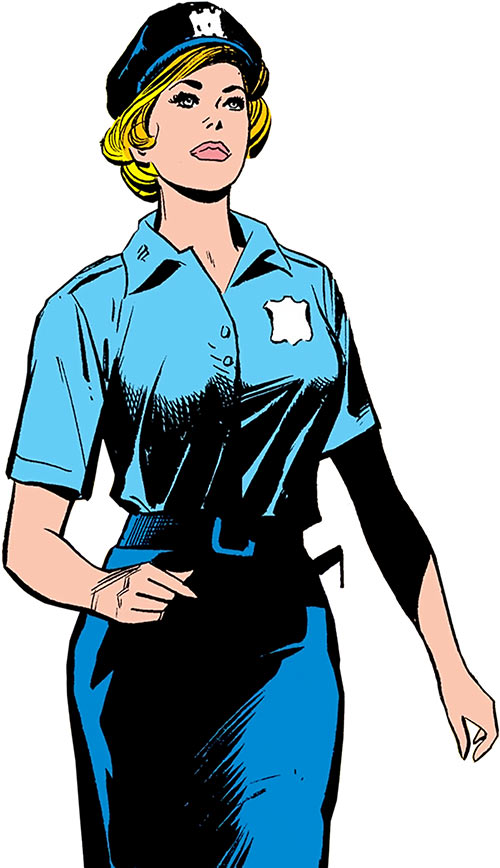 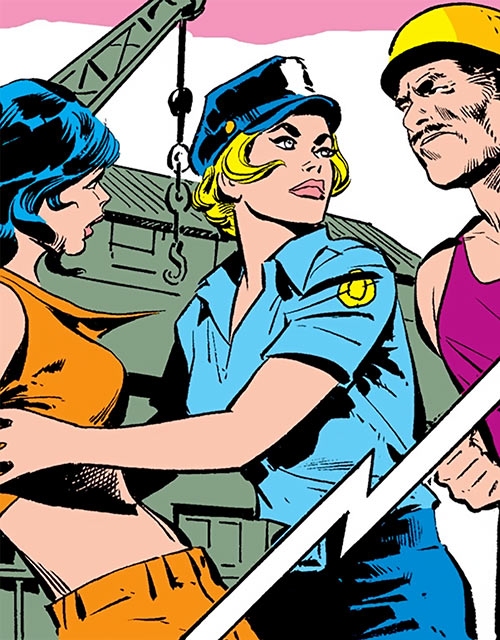 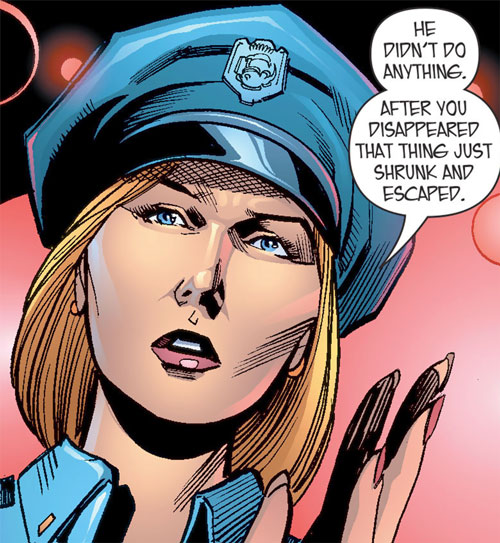