Lady Deathstrike is a cyborg with augmented strength, speed, agility, endurance, and reflexes. Her skeleton has been artificially laced with the metal Adamantium , rendering her bones virtually unbreakable. Her fingers have been replaced with one-foot-long Adamantium claws, which she is capable of telescoping to twice their original length.

Deathstrike is able to cybernetically interface her consciousness with external computer systems, allowing for direct data access to her brain’s memory centers and granting her the ability to remotely operate such systems.

Lady Deathstrike is also supremely skilled martial artist, considered an expert in the art of Kenjitsu and other samurai warrior skills.

She is an accomplished pilot of various aircraft and seacraft, and is fluent in both Japanese and English.

Not such section at the moment, it had to be hacked off with cyber-claws. We’re planning to revise the entire profile, anyway.

Lady Deathstrike is an athletic cyborg woman with aggressive body language. Adorers of dangerous women should find her a striking and sexy beauty. Although she originally appeared as a female in samurai armor, her most known recent costume is from her days as a cyborg.

She wears a large brown vest with horizontally inserted pieces of red metal in columns on each side of her chest, the middle of which is bare and where circuity can sometimes be spotted. The vest is held in place by a red sash. 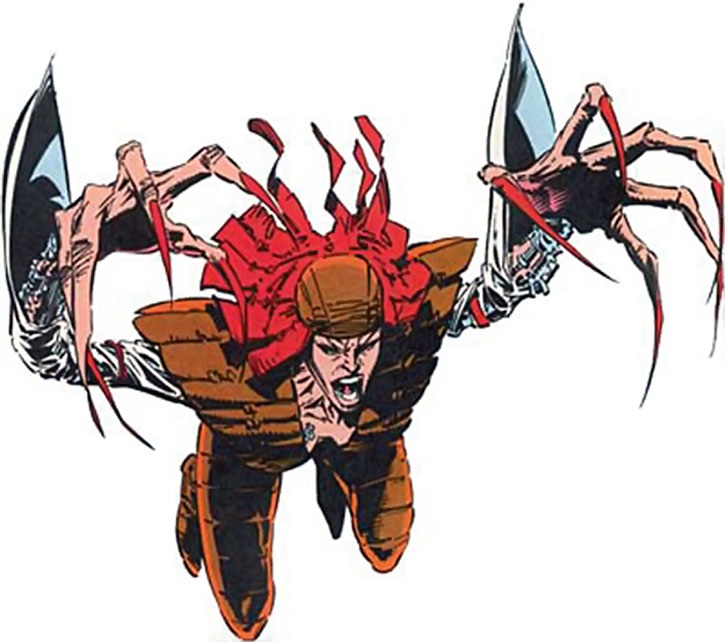 Her legs are completely covered by tight-fitting, metallic-looking brown bands covered only by a pair of brown boots, and a pair of red shorts, sometimes completed by hanging, vertical, red fabric covering vital parts. Her arms, and back beneath the vest, are covered by blue or white shirt, which is held in place by red band along the joints.

Her face, although originally scarred, is now smooth, usually with make-up and white eyes and her head is covered by a brown cap with vertical lines and red stripes of fabric from the back of her head, which resembles hair.

Her bare hands and fingers are normal looking until she chooses to extend her adamantium fingers into talon or claw looking appendages, which are very lethal weapons.

Lady Deathstrike is a vengeful woman often obsessed by the concept of revenge. When her father died she threw away her own life, for the sake of honor, to avenge his death, and to reclaim his lost work.

Anyone wearing Adamantium in one form or another, including Bullseye and Wolverine, were suspected indirect thieves of her father’s work and thus targets for assassination by her. In combat, she is somewhat fond of taunting and gloating, with hatred in her voice.

After humiliating defeats, she chose to loose her humanity in exchange for cyborg power. After becoming a cyborg she did become colder in personality and more like a machine in many of her actions. In fact, when Rogue recently absorbed her abilities, she came to the conclusion that Lady Deathstrike is now more machine than human.

Now, even more obsessed, and no longer completely honor-bound, she allied with questionable criminal elements, such as Pierce, Sabretooth and Stryker.

Although she wants to give an impression of being disciplined and in control, she too often gives in to dubious ideas and impulses. She now seems controlled more by hate than anything else.

Lady Deathstrike is, in fact, mentally unstable, which is exemplified by the fact that she easily lost control of her actions by being possessed by a computer that she had sought to control. 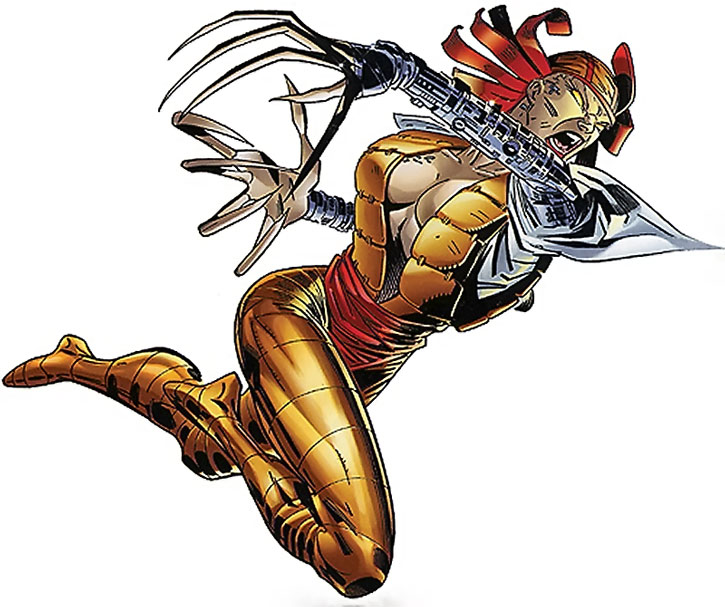 She has been double-crossed several times and so has questioned the advantages of teamwork due to always failing, and so, sometimes does work alone. Yet she still persists in later again allying with various criminal elements, which are often mutants. Her motifs are blurred and it seems she allies with people from both sides of the law if it fits her current plans.

Despite her weaknesses Lady Deathstrike still does have some people skills, and she has a vast network of connections available for use. She still tries to honor her father and so has taken control over the old family company, somehow finding the time to act as its full-time CEO.

It is possible that she joined the New Thunderbolts to regain some credibility and to gain amnesty for her actions, although she is probably not regretful, but rather planning.

“Your cowardly tendencies choose the most inopportune times to appear, Pierce. Lucky for you Lady Deathstrike is more than a match for any walking automaton !”

“I always give better than I get !”

There is plenty of room in the DCU Japan for more villains. You’d insert her with her origin mostly intact, although exchanging the Adamantium with Promethium or even Inertron is a good idea. She would probably be connected to the League of Assassins.

Equipment:
Prior to her transformation Lady Deathstrike wielded a five-foot-long electromagnetically tempered steel katana. The weapon was destroyed after it shattered against Vindicator’s personal force field. 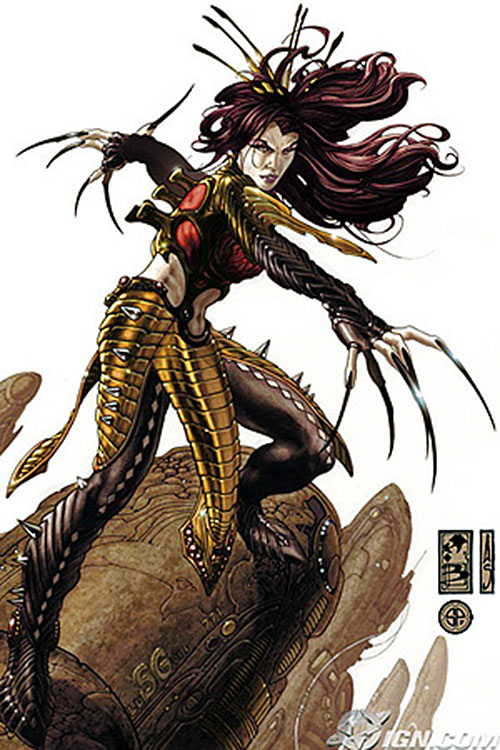