Lady Liberty was a member of the Force of July. This group of US hardliners repeatedly fought Batman and the Outsiders during the 1980s.

See the team profile at the hyperlink above for more context.

Her energy manipulation abilities also allowed her to mimic telekinesis. She could fly herself and a passenger at moderate speeds or pull objects away from others

The latter ability was only strong enough to disarm an unwary opponent. It wasn’t used for direct offense or to disarm someone who was ready for it (hence, in DC Heroes RPG terms, the Diminishing Limitation of her Telekinesis).

Her torch serves as a focus for her powers. She does not need the torch to use her powers but she is much more accurate when channeling them through it. 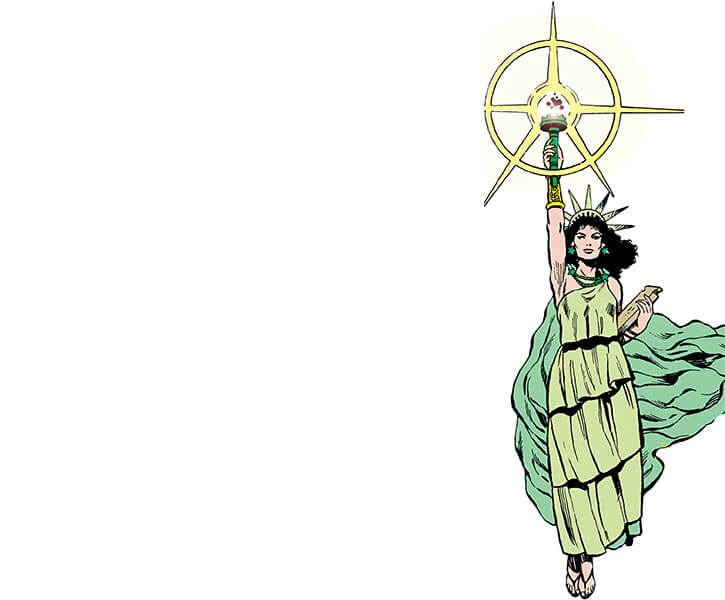 Freedom’s Ring fared even worse than the team that inspired it. They attempted to provide assistance in the Battle of Blüdhaven during the Infinite Crisis only to die in battle even more quickly and pointlessly than their predecessors.

There also was a version fielded by SHADE under Father Time, which died even more quickly and pointlessly than these. 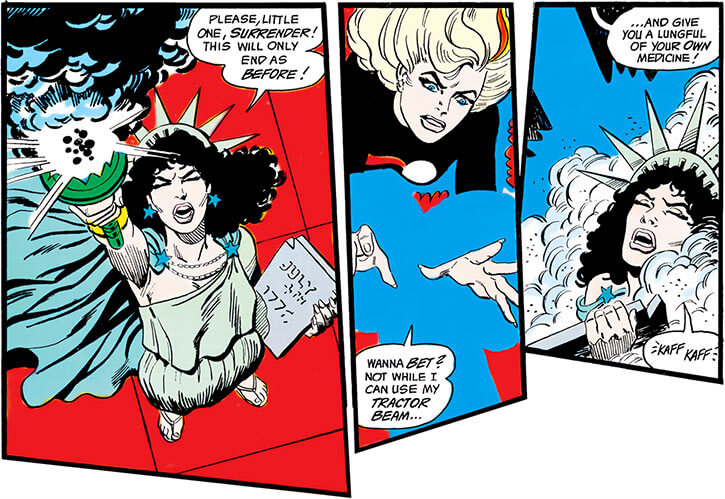 As an homage to one of France’s most famous gifts to the United States, Lady Liberty is dressed as the Statue of Liberty. She wears a long, flowing, layered off-the-shoulder robe, a heavy tiara with long spikes spreading out from it, and light sandals.

Added to this ensemble is a long cape clasped at the shoulders and star-shaped earrings.

She bears copies of both of the items that the statue holds:

All of her clothing and items are colored in the same pale green as the oxidized copper statue.

Lady Liberty herself is a tall, regal-featured White female with curly black hair that falls past her shoulders. She speaks English with a thick French accent, slipping back into her native tongue for selected phrases.

Confident in her abilities, Lady Liberty will often fire a warning shot and offer her foes the opportunity to surrender peacefully before engaging them in combat. If her opponents fight anyway, Liberty can instantly switch to an offensive approach.

She fights calmly and with an almost detached air, as if she does not particularly wish to do battle but accepts that it is necessary. She is careful to use the minimum necessary force, even when confronting the Communist forces that her team is primarily intended to oppose.

One example of this was using her Flame Project to give Soviet attackers a disabling “hot foot” rather than simply setting them aflame.

Lady Liberty never falters. Even when she had been disarmed and had Katana’s blade to her throat, Liberty fought back and managed to turn the tables on the heroic samurai.

At the same time, her lack of braggadocio or aggressiveness stands in marked contrast to most of the team.

It may be this reserve that kept Lady Liberty from commenting when Blairman spoke disdainfully of Geo-Force’s foreign accent and the “foreign blood” of both Katana and Black Lightning, even though she and teammate Mayflower share those traits as well.

Likewise, her lack of aggressive assertiveness and her status as a foreign ally may have kept her from assuming the primary leadership role in the Force of July, but she is still an important part of the team’s command structure. She often counsels patience for the brasher members of the team as well as being one of the few who collaborates on coordinated strategies.

One such impromptu example of the latter was Blindsiding targets by having Mayflower enlarge plants behind the Force’s opponents to serve as reflectors for ricochet attacks with Liberty’s Energy Blast. 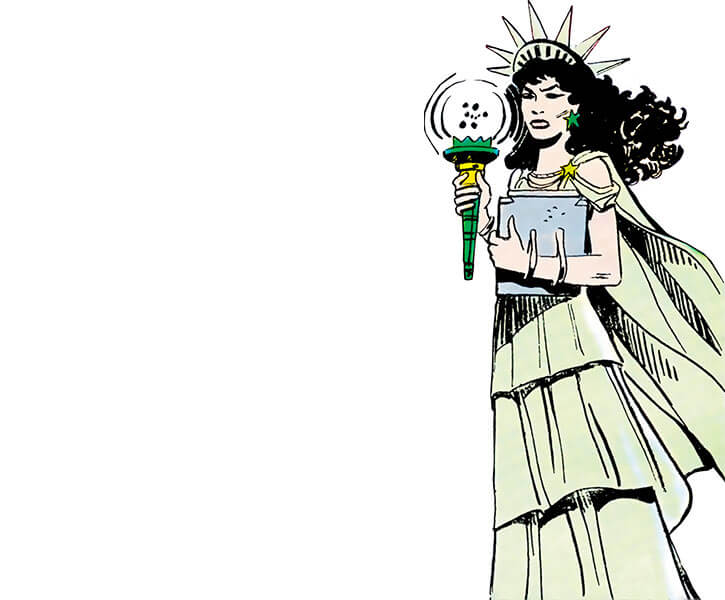 “Mon dieu ! Very clever, in one so young…but we shall see if you can survive my coup de maître — my master stroke !” 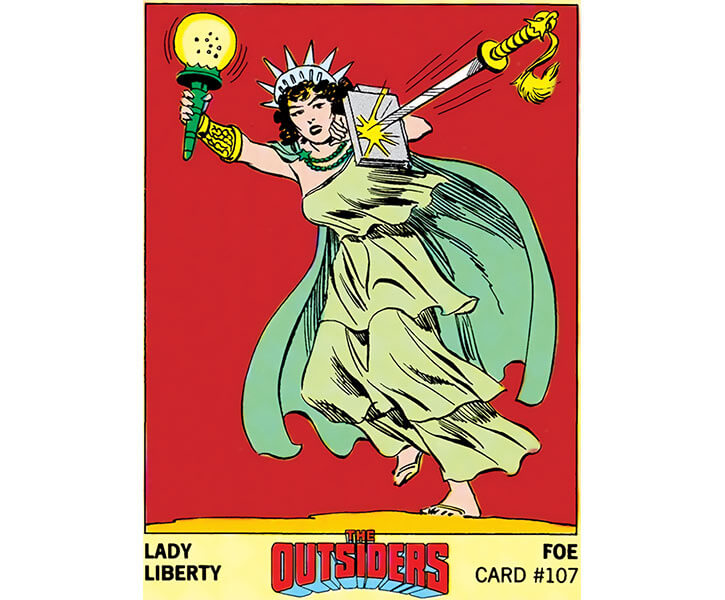 Accuracy only works when Lady Liberty channels her Powers through her torch (-1FC).

Three new Lady Liberties have appeared since the original’s death. All of them have worn a more stylized version of the Lady Liberty outfit with the powers built in to it [BODY 06, Energy Blast: 07, Flight: 06, Creepy Appearance (the wearer’s eyes glow green)].

When Energy Blast is fired a hologram of Lady Liberty’s torch appears to be floating next to the outstretched hand firing the blast.

None of the new Lady Liberties has fared very well. The first was a member of the Force of July’s successor Freedom’s Ring and was killed by the supervillain Geiger during the Battle for Blüdhaven. The costume was passed on to a new agent when Freedom’s Ring became part of S.H.A.D.E. during that same conflict and was soon after killed by Ravager.

An agent of First Strike was given the costume and deployed against the Freedom Fighters only to have her outfit destroyed by Phantom Lady, though the agent herself was left unharmed and quickly returned to duty with a new costume.

One of the Everyman Project heroes also took the name of Lady Liberty, but as far as is known this hero had no relation to the other Lady Liberties.

The Powers are to some extent speculative. Liberty’s Telekinesis-like abilities could also be represented by a combination of Flight: 06 (Usable on Others within a 0 AP Range) and Attraction/Repulsion: 03.

It is also possible that some Powers such as Chemical Attack were innate to the torch rather than herself. 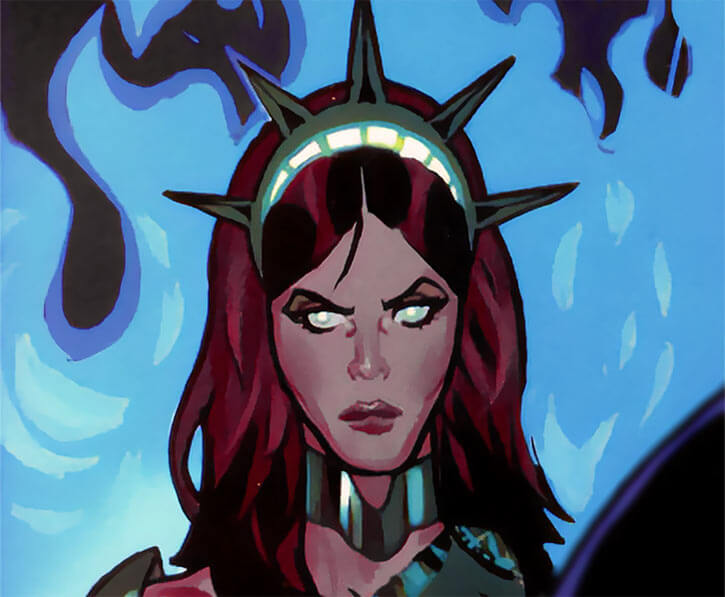 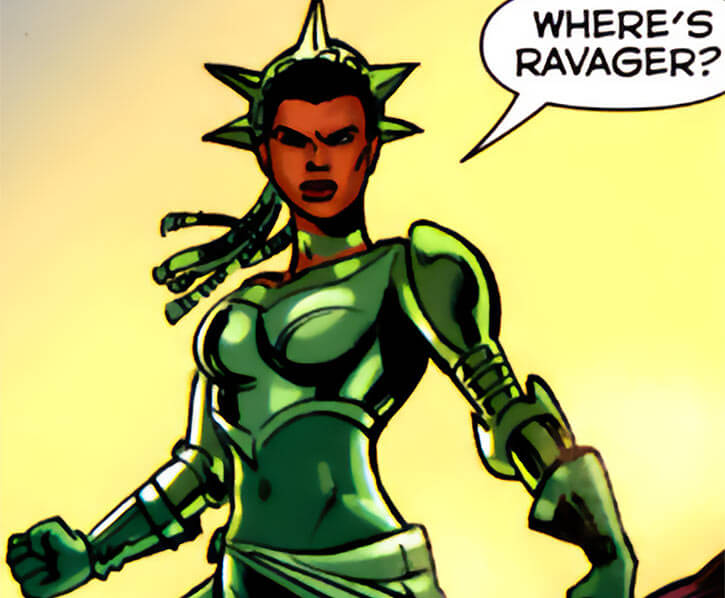