Lady Quark is not only a powerful and competent fighter. She’s also as strong as a steamroller (about “Class 20”), and a powerful flying energy blaster .

Lady Quark was born with the ability to control nuclear reactions and turn them into force blasts. The magnitude of her powers can be controlled from narrow beams to enormous blasts. Her powers appear nearly inexhaustible, and she can absorb energy as well, turning it back on an enemy.

Lady Quark is able to withstand the vacuum of space and can fly from world to world with no need for a starship.

Lady Quark can fight most armies and superhumans, and is not afraid of Lobo. She tends not to spend any Hero Points  against opponents she feels contempt for (say, mere Khund soldiers and other rabble). But this means she can sometimes be taken cold if one such opponent rolls a mean series of doubles.

Conversely, she’ll spend a lot of Hero Points against opponents which are above her weight class, such as Lar Gand. This will even the odds.

In unchartered space there was a world that seemed well-ordered and prosperous. The people had there had lived under a monarchy for generations. Those who ruled inherited powers tied to the world’s nature, and they protected both planet and people.

The planet’s last rulers were Lady Quark, Lord Volt, and their daughter, Princess Fern. The three possessed powers involving the elements, nature, and the atom itself. Yet even their combined abilities could not save their world from a wave of anti-matter energy that became a cosmic symbol for a world-shattering event known as the Crisis.

Her world and her family destroyed, Lady Quark found herself summoned to Earth by an enigmatic being called the Monitor. She allied herself with Earth’s heroes to combat a menace known as the Anti-Monitor. Once the battle was done, Lady Quark was invited to remain on Earth.

For a time, Lady Quark wandered about her new homeworld with Harbinger and Pariah. These were also strangers to Earth from the aftermath of the Crisis. She continued to crave adventure and sought events that required her power. Lady Quark also deeply missed both her husband and ruling her world.

After being rejected romantically by the youthful super-hero called Starman, Lady Quark left Earth. She sought a new environment which would provide the basis for an empire.

She wandered through the galaxy until she met the pirate Dagon-Ra. Dagon-Ra’s power and forceful personality attracted Lady Quark. They became lovers and partners. But Tashana fell victim to the pirate’s immense power, and soon became an unwilling concubine. For months, she waited for an opportunity to strike back and gain freedom.

That opportunity presented itself in the form of Lobo, the intergalactic maniac on assignment from L.E.G.I.O.N. Working as the advance guard for the intergalactic police force, Lobo joined Dagon-Ra until such time as the team could launch an assault.

The assault was almost stopped before it began. Dagon-Ra had Lady Quark lie in wait for Lar Gand, a hero from Daxam. In simulations run by L.E.G.I.O.N.’s leader, Vril Dox, the battle was a stalemate. But Lady Quark took the advantage and defeated Gand.

The L.E.G.I.O.N. ultimately prevailed. Dox invited Lady Quark to join the team. She agreed, figuring the inter-galactic force could satiate her appetite for order through confrontation. Her attraction toward Dox is another reason she remains with the group.

Lady Quark started working with L.E.G.I.O.N.. She was content to be friendless, her imperious nature making her a match for Dox in coldness. When describing Tashana, Dox’s computer analysis says, “Unpredictable, belligerent, unstable. Potential danger.”

Quark’s bodysuit is normally yellow. But it becomes covered with coruscating red energy when she powers up.

Quark is a mighty empress in exile. She’s trying not to look distraught despite the fact she lost everything, including her loved ones, due to a cosmic catastrophe. She certainly won’t be ordered around like some lowly servant, and always fights to the last shred of consciousness.

She has a strong noblesse oblige attitude. Her station and power also mean she will defend everything associated with her (such as the L.E.G.I.O.N.) so she herself can appear spotless.

Quark wants to resume her station. Her plans include marrying a powerful, strong man (she was attracted to Starman (Will Payton)’s power, and Dox’s intellect) in order to become an Empress again. She views this as a desirable political marriage, not some romantic nonsense.

In combat, Quark would rather fly around looking regal and blasting things to smithereens. She does not want to sully her hands. If hard-pressed, however, she can kick ass like Chuck Norris’ big sister.

Out of combat, she’s strong-willed, haughty and impatient. It is obvious in her personality that she’s a straightforward, formidable opponent with little tolerance for inappropriate behaviour or opponents.

“The day that the Empress of Quark can be taken by evil renegades like you is the day I forswear my royal bloodline, the day I lay aside my L.E.G.I.O.N. insignia and take up begging on the streets of Cairn !”

Before the Dagon Ra case, she had about 120 HPs. 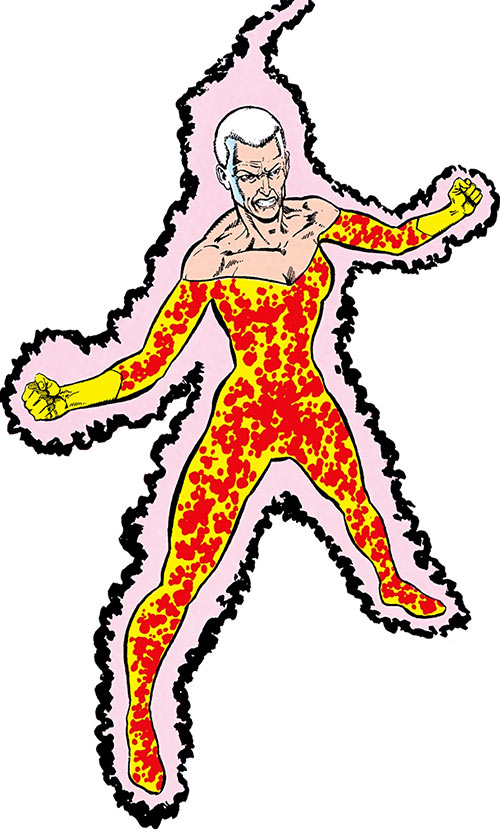 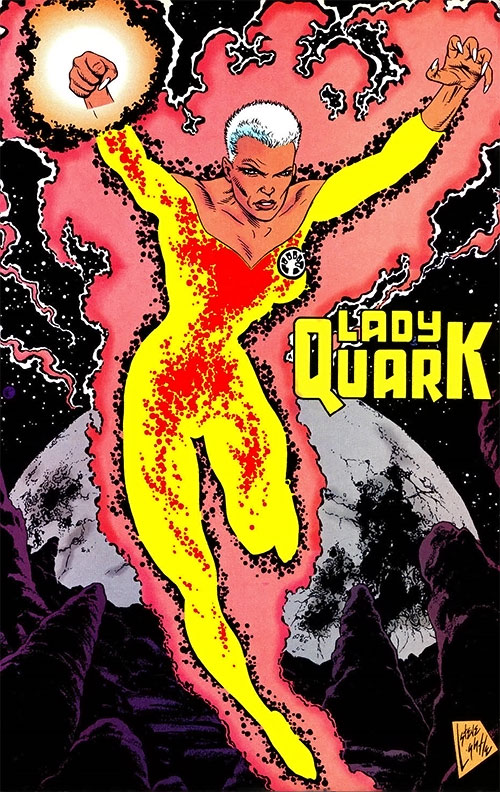