There have been many takes on Shiva, which often amount to different characters by writeups.org standards. We thus distinguish the following versions :

So far, so good. There’s just one last trick to get. We went for an unified (“chronconned”) approach to her history. This means integrating all the information known at the time of the writing in a way that makes her biography look more or less coherent. Aside from straight retcons such as the birth of Cassandra, the two main points where we cheated are :

The history on WORG thus doesn’t contradict anything seen in the comics we have researched. It also explains away conflicts between versions, without introducing new material.

Shiva is already a world-class martial artist – and she is improving every day. She prefers using her sword and shuriken. At this point she considers bladed weapons (and fighting people armed with bladed weapons) her speciality.

Shiva enjoys a certain level of oneness with the Tao . She also has contacts within G.O.O.D. to train her with advanced technology. As a result she always seems to have the skills to deal with the matter at hand. She loves to be mysterious about how she learned them.

Among the most consistent of those are piloting exotic vehicles, and her remarkable ability in exotic healing arts. As she notes, Shiva is a deity of creation and not solely destruction. However, her aggressive personality means she only uses those medical skills when necessary. She certainly doesn’t roam about healing people in need. 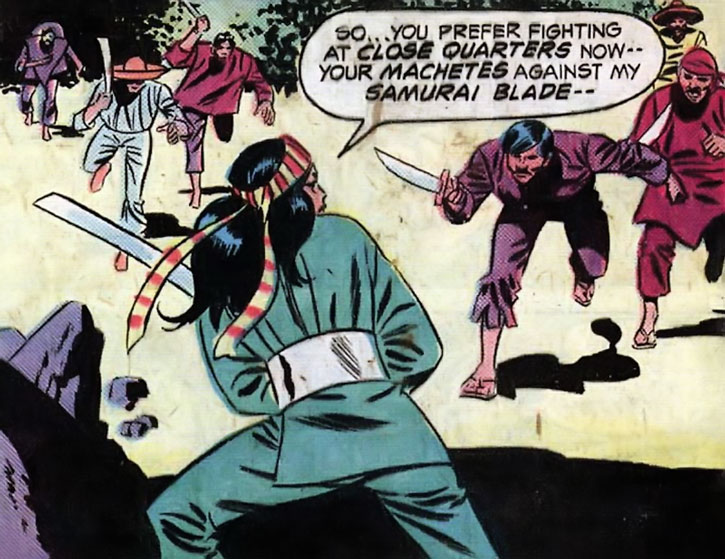 During this era, Shiva is armed with a katana provided by Barney Ling, the head of G.O.O.D. – though it is often drawn more like a scimitar. This blade was forged by a genius blacksmith in the XVIIIth century, whose techniques were never duplicated. Barney Ling called the blacksmith “Sin Lung” – presumably he read the kanji in Cantonese Chinese.

Shiva carries a half-dozen large shuriken on her belt. She throws them with lightning speed and unerring accuracy, but seldom throws a volley at a single target. Shiva’s throwing stars are at least as deadly as a large, heavy throwing knife. They can easily kill a man or puncture a car’s tyre.

Though she seemed to own many other weapons, Shiva only ever used her katana and her shuriken in issues of Richard Dragon, Kung Fu Fighter.

As a child, Sandra Woosan was particularly close to her sister Carolyn. Both were gifted for the martial arts, and avidly followed lessons from local teachers in kung fu and other styles. They often took part in competitions and usually won.

The Woosan sisters enjoyed sparring together. They gradually came up with their own style, though it resembled acrobatics and dancing more than conventional fighting arts.

Carolyn was reportedly the goddaughter of the legendary O-Sensei. Since Carolyn’s uncle had a Japanese family name, it is possible that the sisters are Japanese or Japanese-American on their mother’s side, and (presumably) Chinese-American on their father’s side. Apparently, neither sister trained under the O-Sensei during their childhood or adolescence.

While the sisters were in their late teens, David Cain, arguably the best assassin in the world, was experimenting. His goal was to raise a child who would master the “language of violence” to the exclusion of any other.

Cain eventually decided that what was needed was the right genetics. He thus looked for a woman with a formidable natural talent for the martial arts. This is how he spotted Sandra Woosan. He soon realised that while Sandra’s talent was unbelievable, she was subconsciously holding back to remain at the same level as her beloved sister.

Cain decided to terminate Carolyn. But before he could move in, he heard about Carolyn Woosan’s uncle, Mr. Shiruto.

Shiruto was hunted down by the Swiss, a sadistic killer working for the crimelord and industrialist Guano Cravat. His mission was to obtain secret scientific documents written by Mr. Shiruto.

Shiruto managed to kill himself rather than be interrogated by the Swiss. The killer couldn’t find the documents either. However, Cain floated the rumour that Shiruto has sent the documents to his niece Carolyn Woosan.

(As noted above, inserting Cain into the Swiss’s work is our SUGGESTED RETCON  to have all versions of the story coexist without colliding. It is NOT canon.)

This subterfuge nearly went awry. While the Swiss did capture Carolyn Woosan, he soon found himself opposed by formidable martial artist Richard Dragon, the best student of the legendary O-Sensei. The Swiss narrowly evaded Dragon several times, keeping the heavily drugged Carolyn alive to serve as an hostage.

However, Dragon caught up with him one last time. The Swiss panicked and crashed his motorbike, and Carolyn Woosan was killed in the accident.

(That Carolyn Woosan was kept drugged is NOT canon. It is a No-Prize Hypothesis  intended to reconcile later accounts of Carolyn being a competent fighter with her helpless behaviour in the vintage comics.)

Sandra Woosan was devastated. Rejecting Dragon’s and the O-Sensei’s way, she investigated the Swiss. This eventually lead her to the feared League of Assassins. As she repeatedly clashed with the League’s killers, her anger made her fighting style grow at an unbelievable pace.

Still, this wasn’t enough to defeat David Cain himself. He confronted her and defeated her. His goal all along was to offer her a deal. Cain would impregnate her and claim the child as his own, in exchange for showing her how to go beyond her current limitations.

Still driven by anger and grief, Woosan agreed, sparring with Cain even months within her pregnancy. Woosan continued to bloom as a grandmistress of the martial arts, gaining ground on Cain himself. She may also have trained under the dreaded Sensei of the League of Assassins.

Sandra eventually gave birth to baby girl named Cassandra, and just walked away. She had by that point reinvented herself as an entity bringing creation through destruction – Shiva or, as she was soon to be called, Lady Shiva.

Shiva then started her long path of confronting other fighters and martial artists, more often than not in fights to the death. She would learn from them and become the very best fighter in the world.

in 1975, Guano Cravat contacted Lady Shiva. He fed her a version of the death of Carolyn where Dragon was the villain. With Cravat’s backing, she infiltrated G.O.O.D. undercover, as a renegade Cravat employee wanting him brought down. The enigmatically-acronymed G.O.O.D. agency occasionally employed Dragon and his friend Benjamin Turner as their star agents.

Shiva arranged for Dragon to attempt a lone invasion of Cravat’s fortified headquarters. As expected, Dragon made it inside, proving he was indeed worthy of meeting her in single combat.

The deranged Cravat insisted on personally witnessing the fight. To make things more interesting, he perched himself on a laser cannon whose beam was randomly rotating throughout the arena. Shiva soon proved she could fight Richard Dragon, Kung Fu Fighter, on a nearly even footing.

Dragon tried to tell Shiva the truth but she did not believe him… until the babbling Cravat accidentally confirmed Dragon’s version. The two fighters turned against Cravat, though Dragon convinced Shiva not to kill the depraved crimelord.

Shiva started hanging around Dragon. She knew that he acted as a magnet for danger for her to get involved in, and she presumably wanted to observe his and Turner’s fighting techniques. She thus repeatedly fought along with the kung-fu fighters, often as part of the forces of G.O.O.D..

This brought her many occasions to cross swords or fists with a wide variety of deadly opponents, such as Slash or Hatchett.

In 1977, Ben Turner disappeared and was believed dead in the explosion of the Arctic base of Professor Ojo. This event sent Dragon into a depression. Feeling contempt over his sorry state SHiva sternly castigated him and hit him.

She then walked away to begin working as a solo mercenary.

Shiva is usually wearing green pants and blouse, a red cloth holding her hair back, and an odd silvery, metallic belt. Since this is a 1970s comic book, she has blue eyes. From time to time she wears a green hooded cloak or a green hoodie. Both somehow always make her face disappear in the shadows.

She is remarkably attractive, in no small part thanks to her extreme levels of health and vitality.

Shiva is already on a quest for fighting techniques and opponents, but she’s not yet a superb insider in the martial arts scene. She thus does not get in as many fight as she’d like, and tends to be bored and itching for brawls and battles. 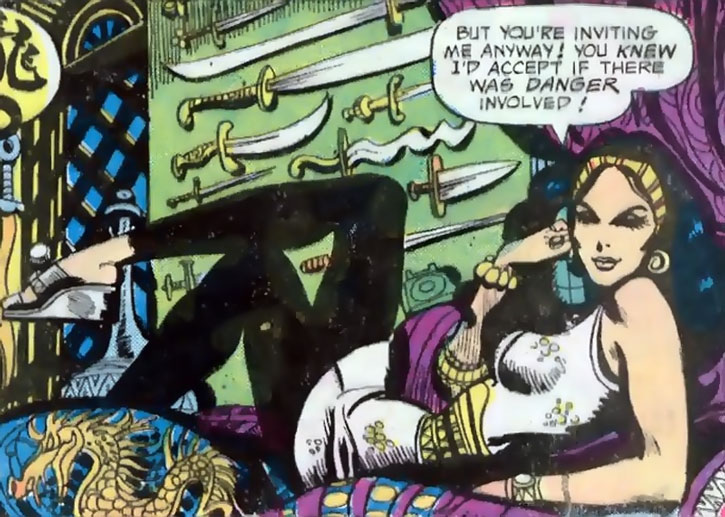 Dragon and Barney Ling are her best leads toward action. She enjoys being in Dragon’s company since that inevitably means trouble. Her eagerness for fights is almost child-like.

At this point she considers swords and other bladed weapons her speciality. Shiva loves rare swords and getting into fights with other swordsmen. She will later stretch herself to master all forms of combat.

Shiva is somewhat deranged in her… lust for fights. To her, facing a half-dozen insane mutant zombie killer clowns with chainsaws, shotguns and scythes would be a good thing. She’d enthusiastically look forward to it. “Gleeful” comes to mind.

When operating with Dragon and/or Turner, Shiva does not normally kill. Doing so would alienate them and cost her her best providers of fights. Thus, if somebody really gets her angry (usually through some patronising, sexist comment), she’ll “just” beat them to a pulp with her bare hands.

Even when assaulted by multiple opponents with melee weapons, she will mostly strike to disable if Dragon or Turner are present. However, she started killing more often as they got used to her personality.

Shiva being still young, she is very proud. She resents any words that may imply she’s not able to outfight anybody. She will also refuse help when wounded, tending her own wounds. She also relishes in being all mysterious, aloof, hard and tight-lipped.

She has no sense of humour whatsoever. Her sole attempt at a “joke”, ever, was recorded in the quotes below for posterity.

Her English is also unusual, even though she was raised in the US. It is possible, hypothetically, that the Woosan only spoke their mom’s Chinese at home. In any case, see the quotes below – her diction is elaborate, theatrical and overwrought. And inscrutable, of course, since this is a 1970s story.

Shiva was simultaneously a bit sweet on Dragon, and angry whenever the possibility of a romantic involvement with him was evoked.

“He’ll wake up with a nasty headache — and he won’t be able to talk for a few weeks ! But I found his voice rather annoying anyway !”

Dragon : “I’m not sure what we’re getting into, Lady Shiva…”
Shiva : “But you’re inviting me anyway ! You *knew* I’d accept if there was danger involved !”

Dragon : “Can you handle the rest of them ?”
Shiva : “Richard… what a silly question !” (turns a faces a half-dozen men)

“None of that is of consequence…” (stroking her sword’s blade) “This is what’s important… cold steel… and the ability to use it !”

“Our friendship is purely practical, Richard — forged in violent combat and tempered in constant conflict. Nothing more. And anyway, you forget… that I am named for Shiva, the Hindu goddess of… destruction !”

(Facing Mongol warriors) “These specimens are far superior to those I fought in New York ! The day suddenly becomes interesting !”

“Although I am not fully recovered from my injury, I offered to help Richard… sharpen his blade technique ! Small joke !”

“Few devices are beyond my mastering.”

Drawbacks:
SIA toward combat and danger.

As a Genre rule, guns are deadlier than usual in Richard Dragon: Kung Fu Fighter stories. Note that this set of Genre Rules is actually pretty common in adventure comic books with such street-level, non-spandex clad protagonists.

Mooks, being aware of those modifiers, will occasionally spend HPs on their attempt at stealth in order to deliver one of those very efficient Blindside attacks. 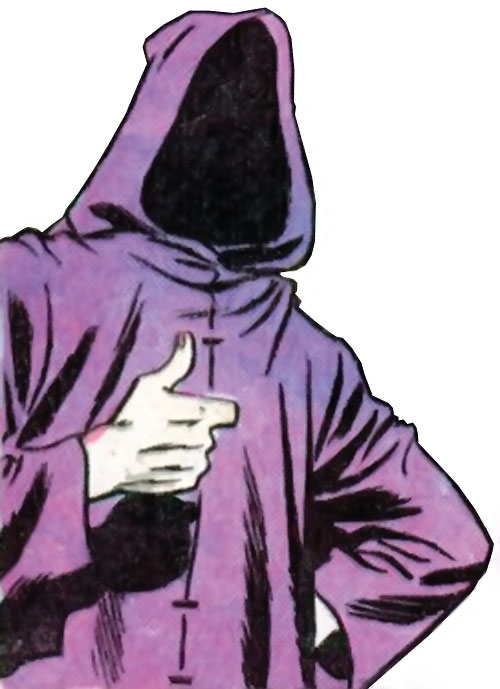 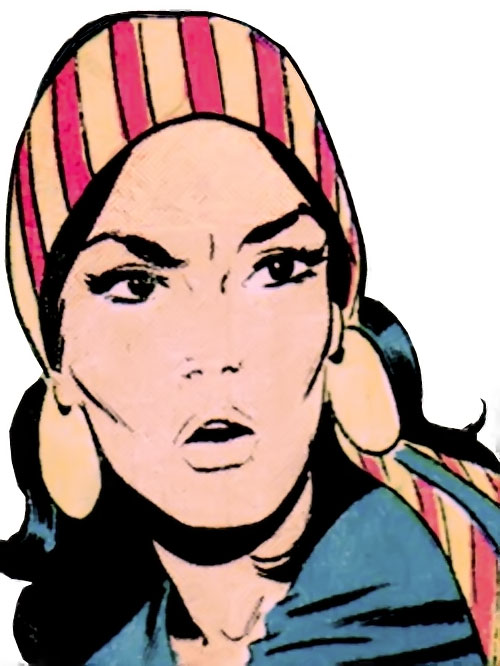 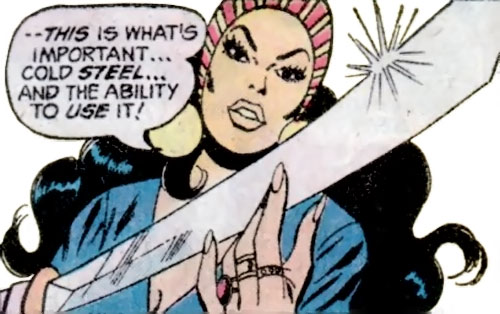 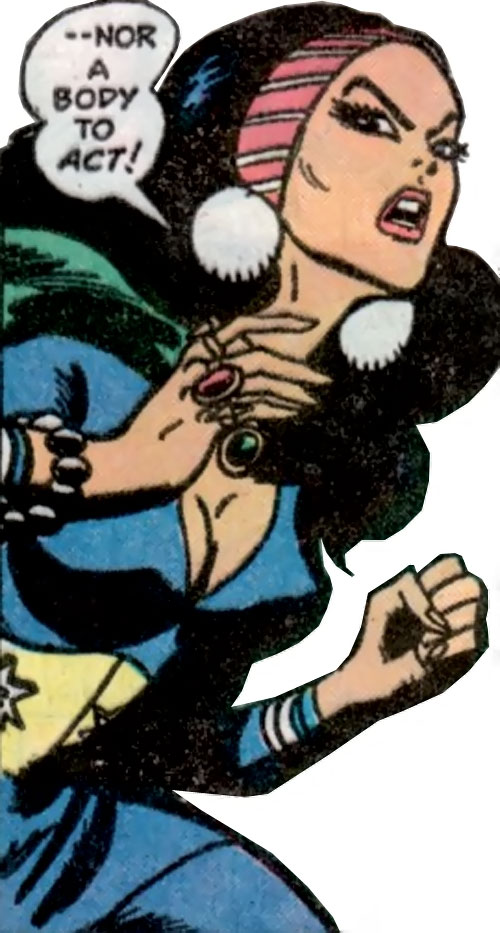 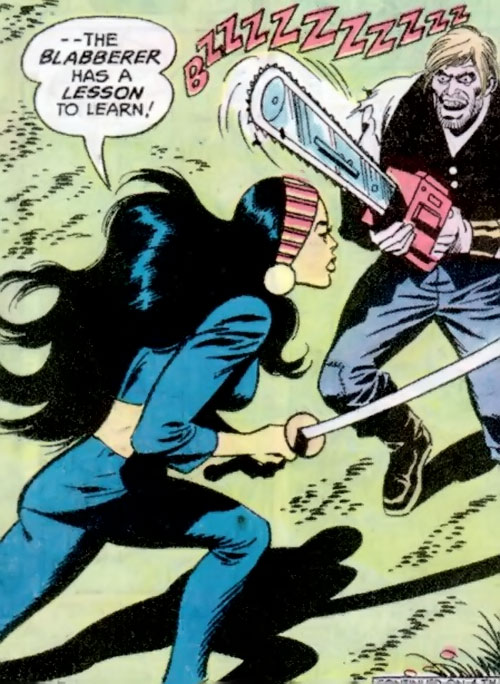 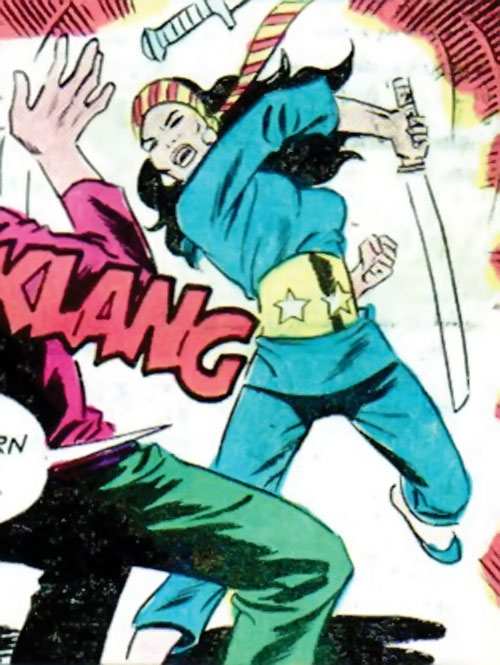 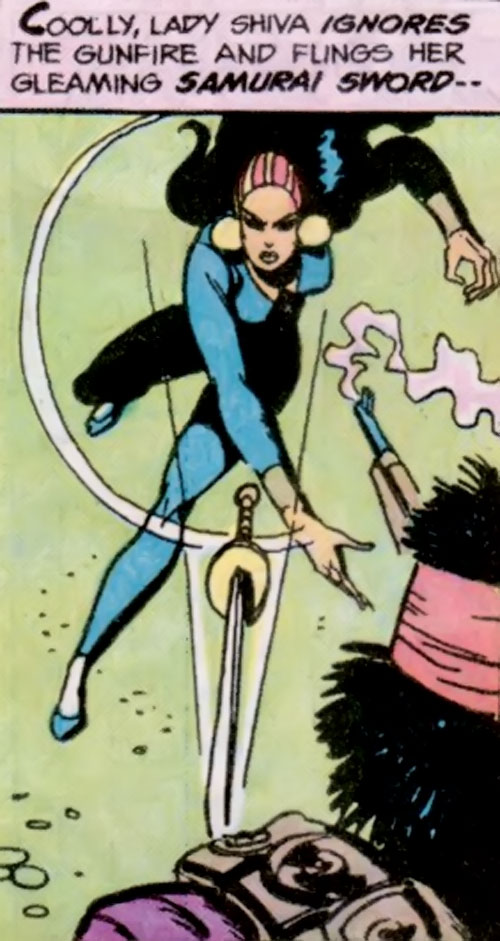