Francophone comics have a long tradition of aviation adventures.

Much of it stems from the Belgian writer Charlier  and his decades-spanning Buck Danny and Tanguy et Laverdure series. Which themselves draw inspiration from wartime novels such as WWII ace Pierre Clostermann’s The Big Show.

The Lady Spitfire series is a minor example of this. And it evokes another classic work, since serving with the Royal Air Force during World War Two is a key part of Bob Morane’s biography.

Laure is a gifted fighter pilot. Her strong instincts for aerobatics greatly enhance her survival chances.

She has a fiery personality, remarkable courage and stubbornness, and a good head for mechanics.

However, Chevalier can’t do much in a brawl. Most men will have about four inches (10 cm) and 40 pounds (20 Kg.) over her. In game terms this corresponds to her low STR.

As she gets more brawling experience she learns to compensate to some extent, for instance by kneeing male opponents in the groin.

At least a curious odd bird

Chevalier flies the legendary Supermarine Spitfire interceptor  . She is an expert with this high-performance single-seat fighter.

This is especially notable since her exploits take place early during the Battle of Britain. At this point, production of Spitfires is still slow and struggling.

The exact variants she flies aren’t mentioned. But it was probably a mix of MkIs and MkIIIs with a Rolls Royce Merlin engine, as her squadron replaced lost aircrafts.

Born in 1920, Laure Chevalier grew up on the since-closed Lille-Ronchin airfield, in Northern France. Back then, Lille-Ronchin was a bustling airfield used by amateur, commercial and military airplanes.

Close to Belgium and convenient for flights coming from England, Lille-Ronchin was quite the international hub by the standards of the entre-deux-guerres (France between 1918 and 1940).

Laure was the daughter of a World War One ace fighter pilot. From the markings on his SPAD  biplane, it seems likely that Mr. Chevalier was one of the French pilots fighting along the American volunteers of the 124 Lafayette fighter squadron  during the war.

Apparently bilingual, Mr. Chevalier continued to associate with anglophone pilots and mechanics after the war. This was especially true after 1937, when the Royal Air Force (RAF) rebased at Lille-Ronchin a squadron flying liaison Westland Lysanders  .

It stands to reason that he taught English to his daughter, explaining her own fluency.

Even as a little girl, Laure was fascinated by flying. She was determined to become a pilot. By age 16 or so she was already working in aviation, flying her dad’s old SPAD to take paying clients on tours.

During that time she grew close to a young anglophone mechanic named Terry, who worked for her father.

Flying the French variant of the P-36 Curtiss Hawk  , Mr. Chevalier narrowly survived the Fall of France. However, all other men on his squadron at Lille-Ronchin were killed in action.

As the Nazi military blitzed through Lille, he decided to escape to Great Britain with his daughter. He had her fly a Curtiss that no longer had a pilot. 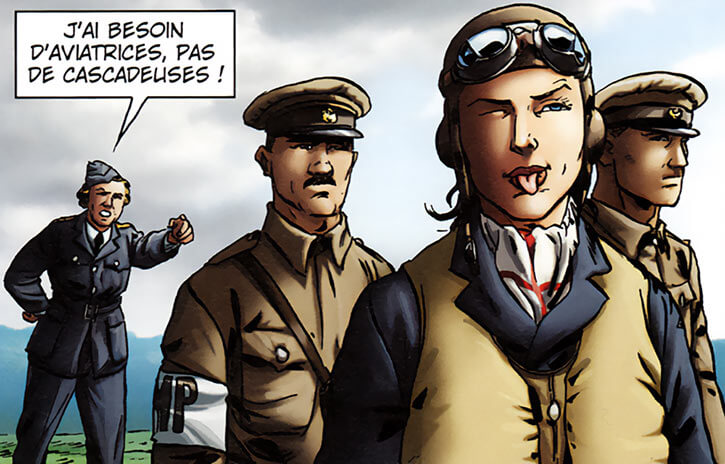 Taking off under fire from German ground forces, the two Curtisses flew over the Operation Dynamo evacuation at Dunkirk  . They were intercepted by two Me-109s  harrying the Allied boats.

Neither of the Curtisses having its machineguns loaded, Mr. Chevalier sacrificed himself. He crashed into one of the Messerschmitts to save his daughter. She evaded the second Me-109 long enough for a RAF fighter to gun down the distracted Nazi pilot.

The RAF man was Julian Hunt, 11th Lord Brighton, the commander of 1B Squadron. Seeing Chevalier’s talent, Hunt was very supportive of her and helped her mourn her father.

The Frenchwoman soon volunteered to join the RAF. But as a woman the only posting she could get was with the Air Transport Auxiliary as a WAAF (Women’s Auxiliary Air Force). That meant ferrying planes from depots and manufacturing plants to military airfields, for male pilots to fly.

This was a similar arrangement to the American WAF. See our first Carol Danvers profile for more.

As an ATA pilot, Chevalier received further training on de Havilland Tiger Moth trainer biplanes  . She soon qualified for familiarisation with the superb Supermarine Spitfire fighter she was to ferry to combat pilots.

Fuming and wanting to fight to avenge her father, Ms. Chevalier was chiefly known to the ATA as a discipline problem. However, she was obviously a gifted pilot. 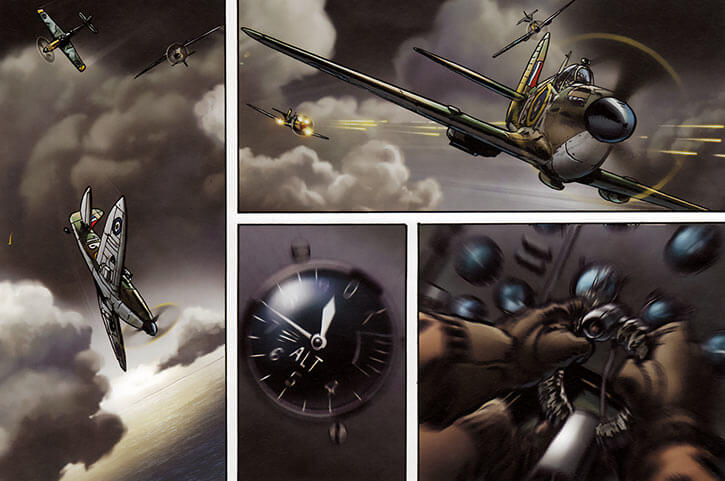 Whilst ferrying a Spitfire to her friend Julian Hunt’s squadron in Brighton, Laure found the airfield under attack by a He 111 bomber  and two Stukas  .

Her guns not being loaded, she resorted to an out-of-the-blue diving charge that took down the Stukas. The first enemy pilot reflexively dodged her Spitfire and crashed into his colleague.

After helping break up a pub fight between Chevalier and one of his pilots who had insulted France, the eccentric and pragmatic Julian Hunt let the Frenchwoman join his squadron.

Hello My Name is “Charlie”

1B Squadron had recently lost an effeminate young pilot without immediate relatives, Charlie Johnson, on his very first outing.

Hunt had Chevalier steal Johnson’s identity so she could serve. In his view, his squadron could use all the pros it could get regardless of gender. As opposed to sending young men to their death, hoping they’d get the hang of air combat.

By resorting to the traditional measures of cutting her hair, compressing her breasts with a long band of fabric and always wearing a uniform, Laure could reasonably pass for Charlie. At least as long as nobody actually looked at her. And she did not speak.

As to the rest of the squadron, they had a gentlemen’s agreement to never mention her gender.

Laure Chevalier was declared dead in a bombing so she could become Charlie Johnson.

The pilot who wasn’t there

She also became a friend of the Squadron’s chaplain, Tom Moore. He doubled as one of the combat pilots, callsign Holy Tom.

Chevalier narrowly survived her first combat mission against the Luftwaffe, winning two confirmed victories and thus her place among the mainstays of the 1B.

Her callsign was simply Charlie.

Squadron 1B is, to the best of our knowledge, fictional. The comic presents it as an anomaly existing as a political favour to the previous Lord Brighton.

Likewise, the Lord Brighton is, as far as we can tell, a fictional peerage.

With the war, there is considerable pressure to stop playing and fold 1B into the main No. 1 Squadron at Tangmere. Which is the unit that existed in the real world.

1B shares the tradition of the real-world 1 Squadron, including the motto In omnibus princeps (“First in all things”). This refers to its role as the first British air unit (hence the number) and its track record of being deployed in nearly all conflicts involving British forces.

On several occasions Brighton’s 1B flies along with its sister unit, Tangmere’s 1. Which is at that point equipped with Hawker Hurricane  fighters. 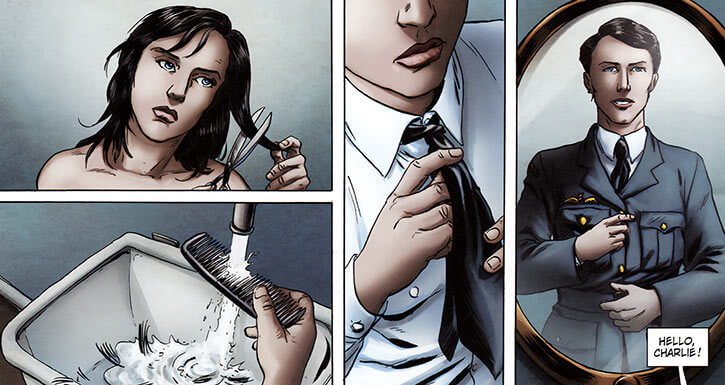 In 1940, Charlie’s mentor Hunter was among the numerous British aces killed by a German ace piloting a prototype Messerschmitt and nicknamed der Henker (the Executioner).

Squadron 1B nearly disintegrated over the loss of the charismatic Lord Brighton. Spirit struggled to take command in such conditions.

Charlie became Spirit’s assigned wingwoman, and eventually his lover. However, with the death of the Lord Brighton, Command wanted to shut down 1B and reassign the planes and pilots to Tangmere  .

To prove that they could still operate as an unit, 1B swore to kill the Executioner.

Chevalier came up with the idea to paint Spirit’s Spitfire using the same pattern as der Henker’s Messerschmitt to provoke him. Spirit and Charlie engaged the Nazi, and Chevalier killed him.

This exploit earned Squadron Leader Mitchell the Distinguished Flying Medal  , and made “Charlie Johnson” a hero of the RAF.

All for one and one for all

By late August 1940, “Charlie Johnson” was an ace with an impressive 16 confirmed victories, putting “him” firmly among the RAF’s best.

However, her cover was blown by Turner, an arrogant new pilot who hated her guts. Turner even attempted to rape and kill her.

Knowing that she would soon be denounced as a woman to the Air Marshall, Chevalier launched a solo mission using a captured Me-109. Passing herself for a German pilot, she joined a huge Nazi attack wave long enough to broadcast her position to the RAF.

Receiving such early warning allowed RAF defence fighters to coordinate among themselves to attack en masseIn a group; all together.. They thus defeated the assault before it could reach Britain.

Though she had been spotted as an impostor by the Luftwaffe, and Turner once again tried to kill her after claiming not to recognise her Messerschmitt, Chevalier survived the battle. 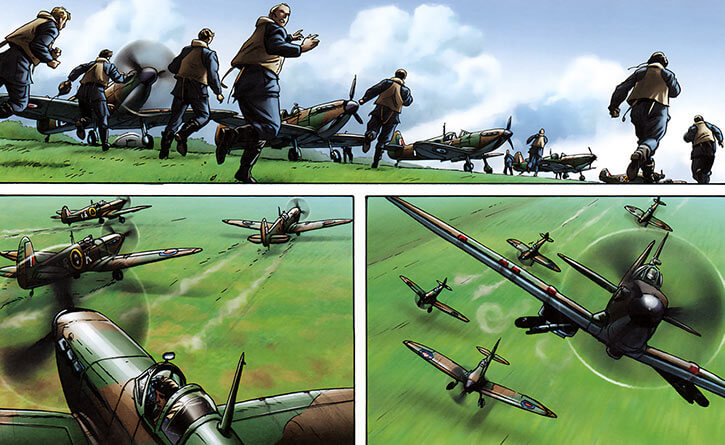 Charlie and Spirit were to be court-martialled over her presence in a RAF Squadron. But Major Sinclair of the Intelligence Service came to the rescue.

The photographs that Chevalier had salvaged from the captured Me-109 had proven a boon to his analysts. Furthermore, Sinclair was interested in recruiting an air ace who, as a foreign woman, was unlikely to be suspected of being a British soldier.

Sinclair arranged for an intervention from Winston Churchill. He ordered the Air Marshall to cancel the court martials and concentrate on the fighting. And after investigating Turner, the Air Marshall sided with Spirit and Charlie.

However, Ms. Chevalier couldn’t continue to serve much longer with the 1B.

As the Nazis focused their nocturnal air raids on London  to break British morale, the 1B found itself fighting over the capital.

This is where Laure flew her last missions with her comrades.

Overwhelmed by the Luftwaffe, the 1B took more losses.

With her machineguns dry, Chevalier resorted to crashing her Spitfire into the tail of a He 111, saving the St Thomas’ Hospital  .

Spirit was then killed when his Spitfire collided with debris from a Me-109 he had just shot down. Charlie was shot through the abdomen by a strafing fighter.

While still hospitalised and mourning her lover, Laure Chevalier was recruited by Major Sinclair to join the recently-created Special Operations Executive as an expert pilot.

Chevalier loves the sky, and hates the Nazis for turning her playground into a battlefield.

She’s fiery, remarkably stubborn, and behaves completely improperly by the standards of her time. One of her closest friends, the heroic Lord Brighton, was gay, and her lover was a badly disfigured school teacher turned killer ace.

A former tomboy, Charlie is one of the guys in most aspects that matter.

Originally, she was driven by a bloodthirsty wish to avenge her father. But after her first combat mission and briefly hallucinating the presence of her father, she became more at peace with that.

Her motivation from there became a mix of :

Much of her characterisation follows the traditional lines for a heroic WWII pilot. Courageous, cunning, full of initiative, two-fisted, honourable, daring, nerves of steel, occasionally cocky and swaggering, etc..

Laure is just 20. She still has some childlike mannerisms such as sticking out her tongue, or hollering when she wins something.

Being French she also tends to speak more freely and to have a more direct body language than proper English women of her age, such as the other WAAF. 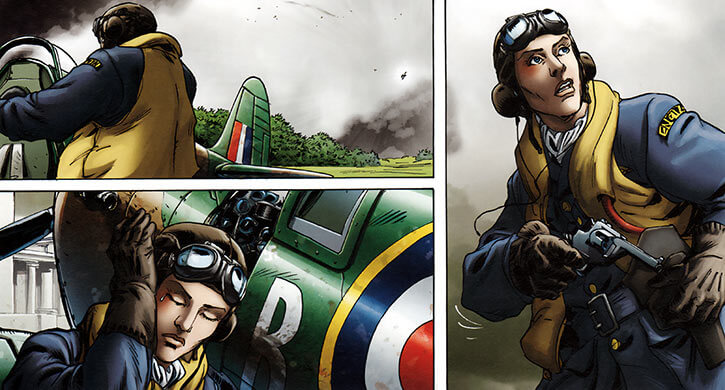 Enhanced Initiative is a Skilled Power and only works when she is flying a fighter aircraft, making her Initiative then a 014.

Gadgetry is limited to maintenance, repair and power user operations on conventional vehicles. And, as it turns out, watches.

Source of Character: The French comics series Lady Spitfire by Latour and Maza.

Writeup completed on the 8th of December, 2013.