Trouble is, she turned out to just work and have genuine coolness to her. Tarnation ! Hoisted by their own petard !

So she became a recurring character.

Howbeit, this profile is only based on her first appearance — she yet had to return when I wrote this. So it has a fair bit of guesswork, and I’d imagine some such guesses have since been contradicted.

Lady Stilt-Man (bwuh ?) wears a suit copied over the basic concepts of the Stilt-Man suit. This mostly means that the legs can extend for several floors. They can also be controlled from the armoured, gyro-stabilised suit with a certain amount of precision.

There are of course motors within the legs, presumably using hydraulics. These also make the suit capable of stomping with great force – sufficient to partially crush an ordinary car.

Unlike the actual Stilt-Man armour, the legs of the Lady Stilt-Man suit seem to have either numerous joints or to be patterned after tentacles. Thus, they are much more flexible than the classic telescoping appendages. It is possible that this was built for her by the Tinkerer.

In practice, the two main applications of the Lady Stilt-Man suit are :

Lady Stilt-Man is trained with the suit. However, using it in a complex environment at high speeds is a challenge. If only because past a certain height it’s impossible to see precisely where one is stepping.

This profile assumes, perhaps generously, that Lady Stilt-Man has some level or athletic and combat training.

Lady Stilt-Man appeared one day in New York City under unrevealed circumstances, trying to fight Spider-Man. Embarrassingly outmatched, she was quickly forced to crash when Spider-Man manoeuvred her into stepping on unstable surfaces. 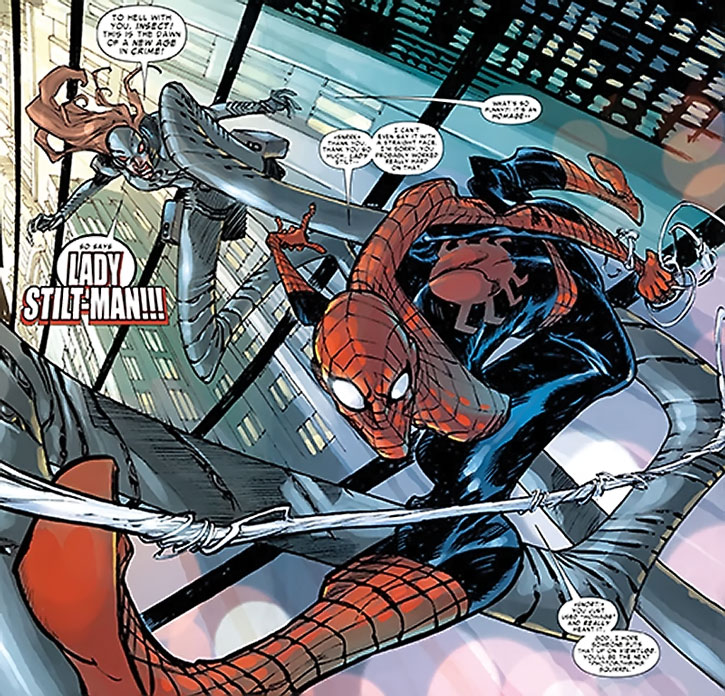 The defeated Lady Stilt-Man just started crying, leaving Spider-Man uncertain of what to do. She was presumably arrested for some misdemeanours or minor crimes.

Lady Stilt-Man clashed a few more times with Spider-Man, perhaps following minor robberies or attempts at such. But she never managed to even remotely threaten him.

Of course, it’s all much harder than it looks, both in the ’good but corny dialogue‘ department and in the fighting department. Furthermore, the super-villain she chose to emulate has a very unwieldy gimmick. She seems emotionally very invested in this pursuit, and couldn’t help but sob uncontrollably when Spider-Man defeated her.

She was presumably just intended as a joke character. Still, what little dialogue we have can also suggest a rabid fangirl of old-school, lame supervillains. She might think that their kitsch, campy style has an odd sort of coolness and wants to pay a homage to these absurd-looking characters from the past.

Her outings under the ludicrous name of ’Lady Stilt-Man’ could be a sort of zany-yet-serious artistic performance evoking a weird past. It might be like some people really enjoy old Godzilla movies with men in rubber suits and shoot their own to put them on YouTube.

Using this take, Lady Stilt-Man could even diversify and start paying homage to some other campy villains from the dark corners of Marvel’s past. She could the Duela Dent of Marvel, appearing as Sister Fish, Miss Kangaroo, the Matadora, Rockette Racer, etc. There’s plenty of discussion on the Internet about the “lamest Marvel villains ever” to draw inspiration from.

Lady Stilt-Man: “To hell with you, insect ! This is the dawn of a new age of crime !”
Spider-Man: “*snrrk*. Thank you, thank you so much, Lady Stilt—… I can’t even say it with a straight face. I’m sorry. You probably worked really hard on that.”
Lady Stilt-Man: “What’s so funny ?! It’s an HOMAGE !”

Lady Stilt-Man: “Keep laughing, insect ! And I’ll squash…”
Spider-Man: “WAIT ! ‘Squash me like a bug ?’ Wow. You excel at finding new and exciting ways to embarrass yourself.”

Equipment:
LADY-STILT-MAN SUIT [BODY 06, EV 06, Running: 06, Shade: 02, Skin armour: 03, Stretching: 04, Limitations: EV only to stomp ; Stretching only applies to the legs, which means that Stretching doesn’t have *any* of the ancillary applications of the Power]. 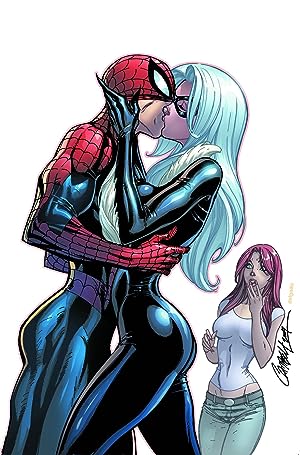 Spider-Man: Return of the Black Cat