In the Marvel Universe there’s a cosmically intelligence scientist called the High Evolutionary. He developed techniques to uplift  animals into sapient  beings. There have been successive generations of New Men.

The earliest subject was a cow, turned into a cow person by a compound called Isotope B. Further generations used more refined isotopes, and the generation Lady Vermin is part of was uplifted using the Isotope E compound. She joined the Knights of Wundagore, which is a New Men defensive militia.

There was another version of Lady Vermin in one of the 1990s Spider-Man cartoons on TV, but aside from the name and hair colour there was very little common ground between the two.

Lady Vermin is an uplifted rat, who only received cerebral modifications. She is fully sapient and smarter than the average human, but aside from her brain and some minuscule cybernetic interfaces she’s physically a normal rat. Lady Vermin is one of the few known New Men uplifted using Isotope E.

The lack of physical uplift is quite unusual for a New Man, and likely a deliberate choice on the High Evolutionary’s part. Since Isotope E New Men were designed as defenders, Lady Vermin may have been intended as a spy/infiltrator and saboteur with a tiny size and a normal animal appearance.

Lady Vermin was once tasked with delivering a special virus using her bite, which is presumably a clue as to why she was designed to be that way.

I’ve assumed that Vermin was a brown rat (Rattus norvegicus) though her size is not quite consistent during the story. But in one scene we clearly sees her attacking a human being, and she looks way too big to be a black rat. Our game stats assume brown rat size and senses.

Like nearly all Knights of Wundagore, Vermin is a courageous and disciplined fighter. She is highly devoted to the High Evolutionary and her comrades-in-arms. Once she runs out of ammo for her dorsal gun she’ll run interference, distracting an enemy by getting in their hair, clawing at their face, looking for weak points to bite and generally keeping them out of the fight.

She seemed to prefer attacking women. But this was probably because they had long hair making it easier for Vermin to manoeuvre.

For unknown reasons Lady Vermin was considered a VIP by ordinary rats. Perhaps she is some sort of nobility, or maybe they respected her for being abnormally smart and articulate. Lady V. could generally convince rats to work for her even if that meant risks, as represented in DC Heroes RPG terms by her Connection.

She’s fluent in both rat language(s) and English. However, she needs vocalising and amplifying equipment to say something to humans other than “eek eek”.

She was surprisingly resilient, even for a rat, and difficult to knock out. Like most Knights of Wundagore, she’d rather die than abandon her lord.

Lady Vermin is one of the small numbers of New Men created in 1995 or 1996 – the first generation to be uplifted using Isotope E. Other Isotope E New Men of this generation are a tigress uplifted to be a hunter-killer (the White Tiger) and Sir Wulf, an uplifted wolf and apparently a great fighter and swordsman.

This generation of New Men was meant to bolster the ranks of the Knights of Wundagore. They were to help defend the Evolutionary’s scientific citadel. The Wundagore science base had been recently attacked by the Acolytes of Magneto, led by Exodus, and further attacks were likely. Lady Vermin was likely meant to be a special operative.

There may have been other, undocumented Isotope E New Men. However, the High Evolutionary became unstable due to his own exposure to Isotope E. It is thus possible that only a handful of new generation New Men were uplifted before his attention drifted away.

In late 1997, Exodus and his fanatical mutants attacked again, and overcame the brave Knights of Wundagore. it was done in part by throwing a large wave of expendable Genoshan mutates at the Wundagore research citadel. The Evolutionary had to retreat so that Isotope E would not fall in Exodus’s hand.

A half-score of Knights survived the battle. The High Evolutionary placed them under the authority of his ally Quicksilver. He then sent them to a safehouse – a riverside castle in New York.

The small unit of Knights helped Quicksilver confront a drugged Thundra and her consort Arkon. They then helped solve a situation on Arkon’s home world of Polemachus. Howbeit, their attempts at mingling with the New York City population were less successful. A brawl erupted as the Knights attended a performance of Cats without Quicksilver.

In the wake of this unfortunate incident, most of the Knights — including Lady Vermin — were kidnapped by the Acolytes.

Lady Vermin convinced a rat to stand in for her as she escaped to warn the others. However, the hapless volunteer was killed by the Acolytes. The Knights were rescued, and Lady Vermin learned from rats infesting the Acolytes’ jail what the next move of the mutants was.

The Knights and Quicksilver rushed to the Savage Land . There, they rescued the increasingly unstable High Evolutionary, taking him to New York.

As preparations were being made to retake the Wundagore science citadel, the Knights were dragged into a conflict with the Heroes for Hire. As a result, Lady Vermin fought Ant-Man (Scott Lang). She took out his tiny pterosaur mount, but was shocked unconscious in return.

After recovering, Lady Vermin and her companions discovered that one of their own — Lord Anon — had been the Man-Beast all along. They tried to fight him off so the unconscious High Evolutionary could be dragged away from Man-Beast’s clutches.

However, the Knights were defeated. They were even briefly forced to serve Man-Beast as they thought that he was holding the Evolutionary hostage.

In the end Man-Beast was devolved back into an ordinary wolf, the High Evolutionary made himself human again to cure his instability, and Exodus was incapacitated and plunged into a coma. About half the Knights had died during the fights. But Lady Vermin was still alive as were Sir Ram, Sir Tyger, Sir Gator and Delphis – plus the ever-faithful Bova.

Lady Vermin has not been seen since. It is possible that she was killed in 2009 when Modred the Mystic summoned Chthon at Mount Wundagore after killing many Knights there.

A clever, courageous fighter with a high level of initiative. Lady Vermin was particularly close to Sir Churchill, a bulldog-based New Man who was killed by the Man-Beast. She often rode on his shoulder.

Unlike the vast majority of New Men, Lady Vermin considered herself to be a rat as well as a New Man. She frequently socialised with ordinary rats. This may be the result of having a normal animal body, and of the high intelligence of even non-uplifted rats.

“Keep her busy while I sniff out a good bit to chomp !”

“I could not ascertain the identities of our captors before I escaped, but they questioned us about where the High Evolutionary has gone — and what’s he’s done with Isotope E.”

“Hurt me, you did ! But the Lady Vermin is a true Knight of Wundagore ! As you will learn to your sorrow !” (WHOMP !)

Source of Character: Marvel Universe (chiefly the Quicksilver series in the late 1990s.) 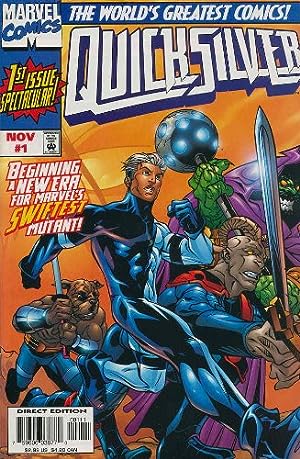 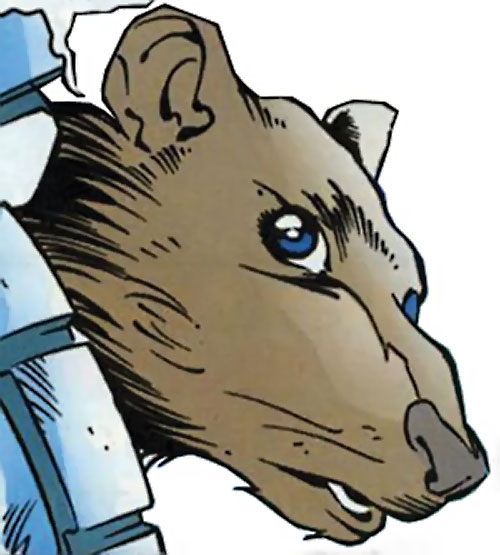 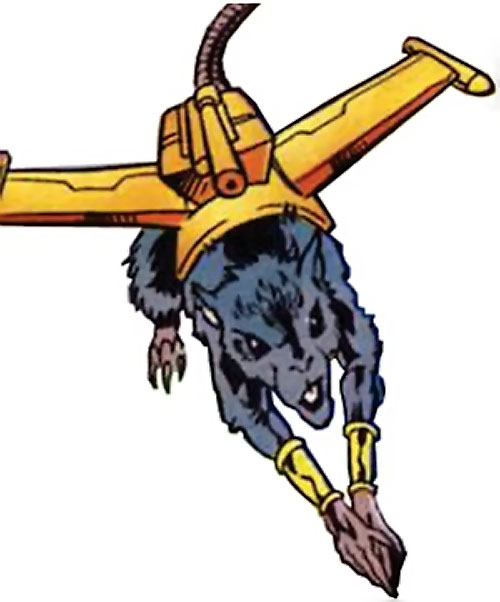 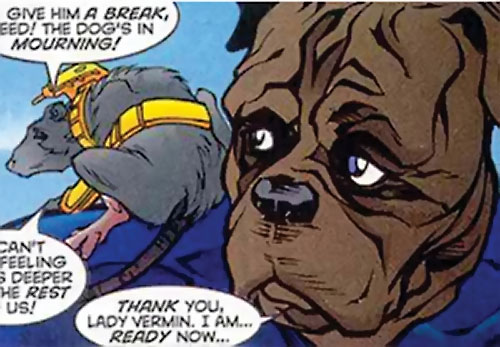 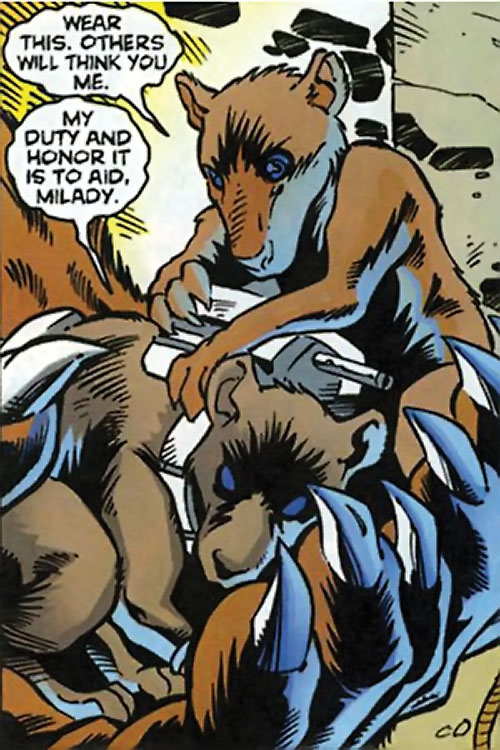