Ladyhawk is actually a pair of identical twin sisters using the same costume and identity. They maintain the illusion that there is but a single Ladyhawk.

Ladyhawk is an acrobatic martial arts expert in the classic rooftop super-hero tradition. She’s strong and fast. Ladyhawk can easily defeat a half-dozen men in a brawl without taking a hit.

Rosetta is markedly faster, more aggressive and better-trained than Regina. Furthermore, her strength-to-weight ratio is quite impressive. Rosetta can pick up and throw grown men without difficulty.

Regina might have technical skills, but this isn’t clear.

Both Ladyhawks are skilled stunt motorcyclists.

Beyond her hand-to-hand skills, Ladyhawk uses an arsenal of specialised equipment. She tends to have but a few items of each kind, and they are not hugely powerful. Thus, superhumans can often defeat or ignore her gear. They work pretty well against more normal people, though.

The Ladyhawk costume also includes a hidden radio uplink, and is heated to endure New York winters. When one is in the field, the other will usually be at HQ advising her over the radio.

Regina and Rosetta Morgan are the twin daughters of “Boss” Morgan, a crimelord associated with East Harlem since the 1970s. Morgan’s marriage disintegrated due to his temper. The ex-couple split everything among them – including the twins.

Rosetta was raised by “Boss” Morgan to be his successor. He treated her like a princess. But he also put her through an intensive, high-discipline training regimen. Regina apparently had a more ordinary upper middle class upbringing with her mother.

A few years before the MC2 era, the twins’ mother died. Soon after that, “Boss” Morgan faked his death for a time.

Rosetta and Regina, then high school students, were reunited. A police investigation into the seeming death of “Boss” Morgan turned up new documents establishing his role in several murders, including the death of the Falcon (Sam Wilson) years before.

(There is a MC2 continuity glitch as Morgan is stated to have died, then inexplicably turns up alive without anyone batting an eye. That he faked his death and came back some years later is the simplest explanation. However this isn’t stated in the material. So the previous paragraph is a No-Prize Hypothesis .)

At Rosetta’s initiative, the twins used their father’s estate to become crimefighters and compensate for his heinous deeds. It was presumably Regina who decided that they would style themselves after the Falcon to honour his legacy. They designed costumes based on Wilson’s earliest, green costume.

Sins of the father

The girls came into contact with the Urichs – lawyer Meredith “Merry” Urich and police scientist Phil Urich. One assumes that Mrs. Urich was their legal representative for the management of the estate until the twins reached their majority.

Phil Urich had had a string of minor super-heroic identities. The most famous had been a benign version of the Green Goblin. As a result he could provide advice, training routines and his technological know-how. Plus his desire to vicariously relive the thrills of super-heroism.

As the Ladyhawk concept and training were being developed, Regina had Merry Urich set up holding companies. These would commercialise Ladyhawk-derived products once the new crimefighter(s) in town made a large enough splash. The benefits would then be funnelled into crime-fighting equipment. 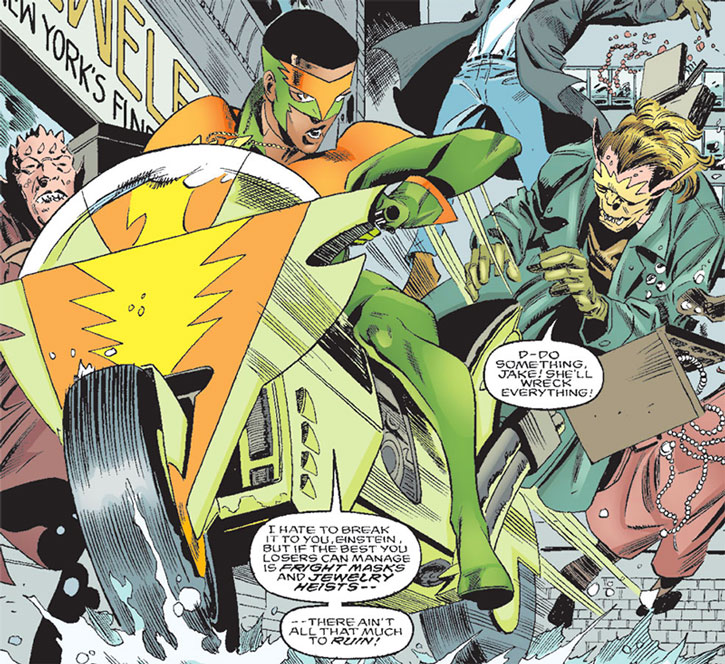 Having trained all of her life, Rosetta was ready well before Regina. But Regina nevertheless hit the streets when her sister did. She couldn’t wait to start her Ladyhawk brand and adventures. After energetically foiling a heist, she mistakenly engaged Spider-Girl (May “Mayday” Parker) in a rooftop battle.

Ladyhawk had to retreat. But Spider-Girl followed her into her hideout and discovered that there were two Ladyhawks. Since Spider-Girl was also backed and trained by Phil Urich, they became allies. All three got good mileage out of sparring sessions organised by their mentor.

During a chance encounter with Earthshaker, Rosetta was badly beaten and sent to the hospital. Regina teamed up with Phil Urich (as the Golden Goblin) and Spider-Girl, and they took Earthshaker down. Rosetta recovered quickly, but it was now possible to deduce that there were two Ladyhawks. Thus, while they resumed their normal setup, they would occasionally pair up.

Some months later, Spider-Girl assembled her New Warriors to take down Angel Face and her son Funny Face. Her team was made up of Ladyhawk, Raptor (Brenda Drago), the Buzz (J.J. Jameson) and the Green Goblin (Phil Urich). Spider-Girl was expelled from her own team over her choice to negotiate with Angel Face, but the Warriors remained active.

Though they worked with the New Warriors, the Ladyhawks remained on good terms with Spider-Girl. They continued to train with her.

One of the Ladyhawks was among the captured heroes when Loki launched a major plot to put an end to Earth’s super-heroes. She and the others were turned into thralls of Loki, but the heroes eventually overcame – albeit at a great cost.

Months later the Hobgoblin (Roderick Kingsley), working for the Scriers, grievously wounded close allies of Spider-Girl – including both Ladyhawks. They were rushed to the nearest hospital and both survived. However, Regina’s broken back left her legs paralysed.

As soon as she recovered, Rosetta went on the warpath to find and kill the Hobgoblin, even though it was obvious she was out of her depth. Scared that her sister would die, Regina contacted Spider-Girl. Rosetta grudgingly accepted Parker’s help. 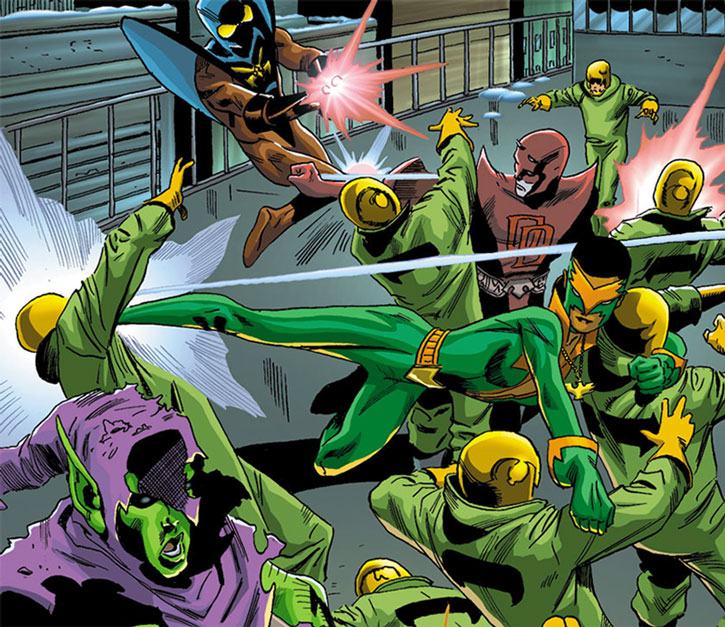 Ladyhawk and the New Warriors (MC2): The Buzz, Darkdevil and the Green Goblin.

The pair went to “Boss” Morgan as they interrogated mobsters for leads about the Hobgoblin. Learning that Kingsley had crippled Regina, Morgan set up an ambush to kill the Hobgoblin. His men nearly killed Kingsley, but a crooked police officer saved him. Apparently, Regina eventually convinced Rosetta not to throw her life away by facing the Hobgoblin.

Spider-Girl called on the services of the Ladyhawks and other heroes during later assaults against the Hobgoblin and his power base. They destroyed his headquarters, though Kingsley and his ally the Mindworm escaped.

Months later, another assault against Kingsley and his ally Silvio Baracca went wrong. The heroes were getting thrashed – but the Punisher (Frank Castle) killed Baracca at the cost of his own life. Mayhem (April Parker) then slew the Hobgoblin.

Regina and Rosetta look almost exactly like each other. They are both skinny and athletic, with super-short natural hair. Regina tends to smile more and be more relaxed, but that’s about the only difference. They seem to be about 18.

After Regina is crippled they switch to straightened hair with super-short braids, with the back of the head shaved.

Regina is flashy and self-aggrandising. A lot of her energy in a fight goes toward taunting her opponents. Said taunts are actually pretty good, and focus on her opposition’s fashion choices, lack of intellectual acumen, lack of sex appeal… Everything that means that they’re not a cool, sexy, smart, skilled young woman like Ladyhawk.

She’s also more likely to use her gadgets to compensate for her lower martial arts skills.

She’s big on the Ladyhawk marketing plan and the money it could bring. That’s not out of greed, but because she loves the idea of having a cool base with flashy vehicles and crime-fighting computers and the works. She’s generally upbeat and positive, and remained so even after she was crippled.

She thinks that her twin should really unclench and stop the “grim avenger” thing. But she actually loves her.

Rosetta is grim, sullen and aggressive. She’s pissed off about most everything (particularly the misogyny and racism that affect her life), all the time. She had a regimented, harsh childhood that made her soldier-like.

Rosetta’s war on crime is almost literal and very personal, à la Batman. She’s willing to sacrifice almost anything to strike at the hated mob – again, and again, and again.

Rosetta is slow to trust people, and can be downright surly until she reaches that point. In particular she doesn’t much like men or White people.

She thinks that her twin is undisciplined and naïve. But she actually loves her.

(Regina, facing fright-masked but well-dressed robbers as they threaten her) “I like a man with confidence. But I can safely assume that anyone with the bad taste to mix Universal Films with Armani has little practical experience with a real woman. Especially one who’s a master of hand-to-hand combat !” (WHOMP)

Spider-Girl: “T-there’s *two* of you ?!”
Rosetta: “Yeah, and now the whole world will know it — thanks to little miss dimbulb ! I told her she wasn’t read for fieldwork, but she never listens !”
Regina: “Why should I ? You’re not my boss !”

Rosetta: “If she can’t take the pain, she should ditch the game.”
Regina: “You have to excuse my sister. I think she read too many comics growing up, and she’s still into the whole ‘grim avenger’ scene.”

(After Spider-Girl explains that she needs a recommendation for a shelter for domestic violence survivors.)
Rosetta (sullenly): “And so you came to ask the Black girls.”

Rosetta: “Watch the language, pal. This Ladyhawk is a bird of prey… and I have a very low tolerance for racists or sexists.”

Rosetta: “I’m guessing they call you ‘magic fingers’ because you’re a pickpocket or safecracker. From the looks of you, I doubt a woman nicknamed you.”

Regina has a Martial Artist score of 05, no Lightning Reflexes, and a STR of 03. After the Hobgoblin’s attack, add a Serious Physical Limitation (Crippled legs). 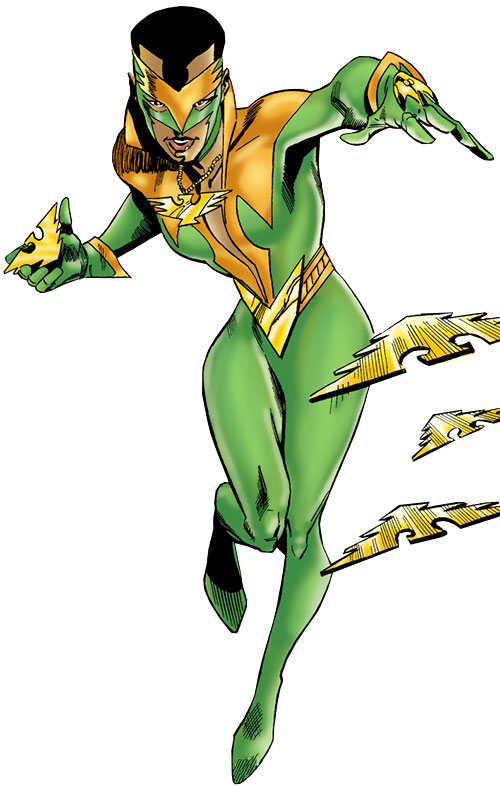 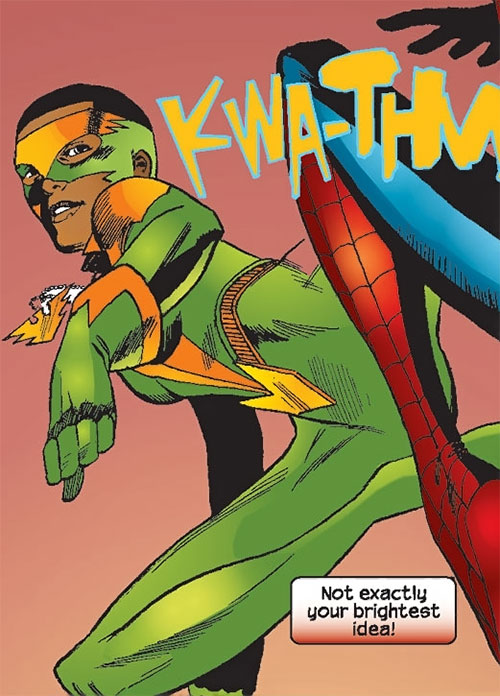 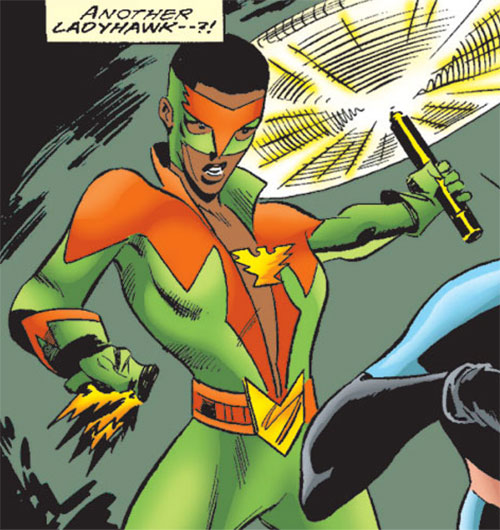 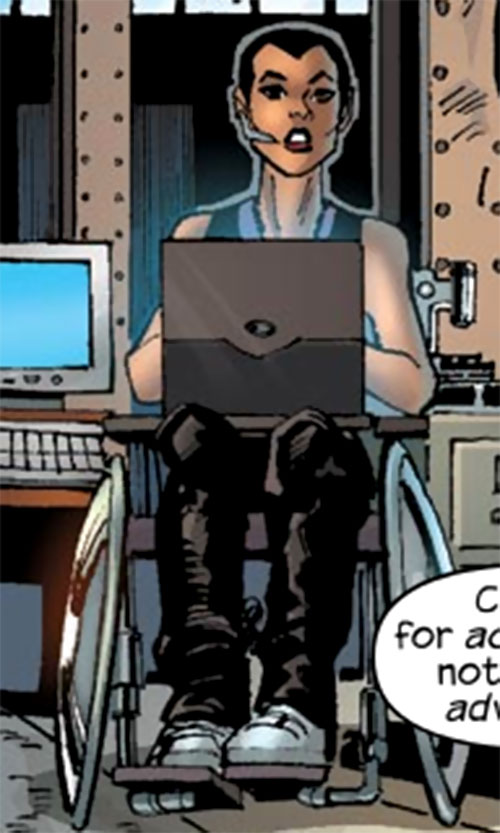