Both T and A are vicious, relentless street fighters and weapon specialists with great technique. They alternate individual attacks (to reposition) with remarkably well-coordinated team attacks. This tag-team act is difficult to counter, their tactics are good and they have a superior killer instinct.

Team Attack usually involve driving their opponent into each other’s path, having one attack high and the other low, pooling their strength to throw an opponent, etc.. They are stand-up fighters, and much prefer strikes to wrestling.

They are also used to working with Blok, Mister X’s bodyguard.

T and A are a pair of assassins hangin’ around in the Big Apple. They live for the night life, and spend a lot of time in the trendiest clubs – usually with violent consequences. As assassins, their main (and sole known) client is Mister X.

in 2001, Mister X decided to test whether Wolverine was worthy of fighting him. He first sent a small army to try to kill him. After Wolverine slaughtered them, he hired the Lady Killers and had his bodyguard, a gigantic Māori called Blok, go fight along them.

Blok and the Lady Killers were devastating against their lone opponent. But despite battering the bloke with a barrage of blows, they couldn’t actually take him out. Though Wolverine finished the fight in a sorry shape, T had a broken arm and A suffered some damage to the skull and neck.

Mister X let the Lady killers hang around a bit. He then dismissed them before fighting Wolverine.

A is the blonde, T is the raven-haired one.

They’re usually seen wearing revealing clubbing outfits. Back in 2011 A had a naughty schoolgirl theme running, and T a leather ‘n’ skin theme.

Both girls are violence-addicted psychopaths. Whenever things go violent, they go postal and will maniacally focus on the opposition to beat them into a bloody pulp.

If only one of the girls goes batshit the other can usually drag her away. If both are aggressive, the nearest ER will soon be full.

They love to heap scorn, sexual references and double entendre at their targets. But in the “creepy and obsessive” way, not the “funny and playful” one. They sound more like underhanded sexual predators.

“So you like it rough, do ya sport ? How about I tie you up for a little bit, then ? You like that that, hmmm ?” (flips Wolverine’s jacket above his head to entangle his hands) “I’d let you tie me, too… I sort of like it rough myself… but it might be tough with you being dead and all…”

They’re psychos, they have a strong theme running, they have to be Bat-villains. Nightwing already gets to tangle with the Double Dare, so they could have danced with Azrael.

Equipment:
They carry a consequent arsenal on their person and in their handbag : 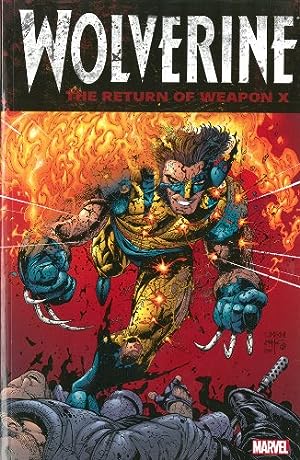 Wolverine: The Return of Weapon X