The following is a list of all the feats that the Lamplighter performed with his prism cane.

Oddly enough, his paralysis ray seemed to have a curative effect on its victim, who had been suffering from a fatal disease. I assumed that this was a once-in-a-lifetime random occurrence. However, if you wish to allow for this possibility, assume that the Paralysis power also causes a Systemic Antidote power of 12 APs to be activated on its victim.

Doctor Lee Carver was a nuclear researcher seeking a way of altering the molecular structure of matter. He invented a “molecularay” that could transform sand into diamonds. Unfortunately, some unknown fault in the ray prevented the change from being permanent. He continued to work on a way to stabilize the transmutation.

Tragedy struck when his experiment blew up in his face. Carver lived, but he was blinded.

Though he could not see, Carver continued his research. There was very little he could do, as the work was very delicate.

The researcher was accident prone in the laboratory. One day he smashed a few vials of chemicals, and was surprised to find his sight had returned. The combination of chemicals and the high frequency waves he was bombarding them with resulted in a new kind of light. The chemicals somehow affected his damaged optic nerves, permitting a more intense light to reach them.

Carver brushed the chemicals on the glass of an old lantern. With the ultra light, the researcher could see but not well enough for the precision work necessary in his advanced experiments. Carver resolved to find another way to reach his goals, even if the entire world had to suffer for it.

He built a cane with the lantern to give him sight and a prism to cause temporary changes in objects. With his weapon, Carver created a new identity as the Lamplighter, taken from a painting from colonial times.

Carver started his crime spree by robbing the Quickway Loan Company, giving his name as the Lamplighter. The next morning, claims adjustor Hal Jordan was sent to investigate the theft for the Evergreen Insurance Company. Jordan had an advantage, the might of Green Lantern’s power ring was pitted against the Lamplighter.

The colonially-clad villain struck again at the Elite Jewel Emporium. The molecularay prism froze the store’s customers inside giant diamonds. Green Lantern had finally tracked down his quarry. The Lamplighter escaped, changing into a tree.

After half an hour, the tree changed back to Dr. Lee Carver. Green Lantern had commanded his power ring to find the Lamplighter, but could not find the villain in his alternate identity.

The Lamplighter chose a recovered sunken treasure ship as his next target. The old wooden ship carried gold bars and doubloons, and the Lamplighter intended to steal it all.

The power ring had not been destroyed. The emerald gladiator knew the Lamplighter would attempt to nullify the ring, so he wore a false ring on his right hand and the real one invisibly on his left.

Where is your dog now?

Years later, the Lamplighter took part in a vacation resort featuring has-been supervillains. The villains “robbed” the pseudo-Bank of Littleville causing excitement for paying tourists. But another Green Lantern faced Lamplighter and the villains. His name was G’nort.

After learning the truth about Littleville, G’nort left to check it out with the Justice League. The current employment status of the villains in Littleville has yet to be revealed.

He dresses like a man from colonial times. He wears a blue hat, a blue and purple coat over a white vest and shirt, white pants, and purple boots. His red hair is tied in a colonial-style ponytail.

His prism cane is brown, with pink accents (the lantern lenses and prism). He also wears a blue domino mask.

All he seems to be interested in is money, though he manages to avoid hurting anyone permanently during his crime spree.

“Instead of setting a flame to help mankind— I’ll ignite a criminal blaze to stun the world !”

Bonuses and Limitations:
Ultra Vision does not allow the Lamplighter to see unless he is in the presence of “ultra-light”. Note that since “ultra-light” is a “new form of light,” no other character is able to see it (although possibly other people with superhuman senses would be able to detect it).
Furthermore, this Ultra Vision does not allow the Lamplighter to see “quite well enough for the close and precision work that’s involved in my advanced experiments !” On the other hand, he is able to invent his Prism Cane with no penalties. The GM should decide when this limitation applies, but use it sparingly. 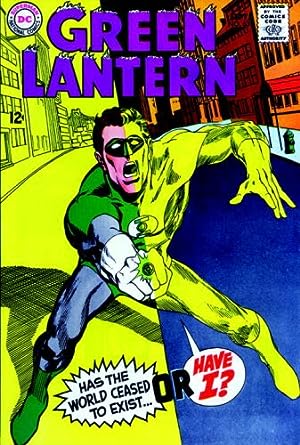 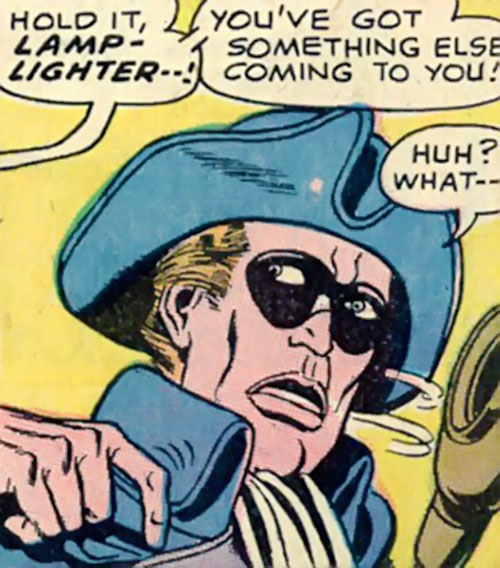 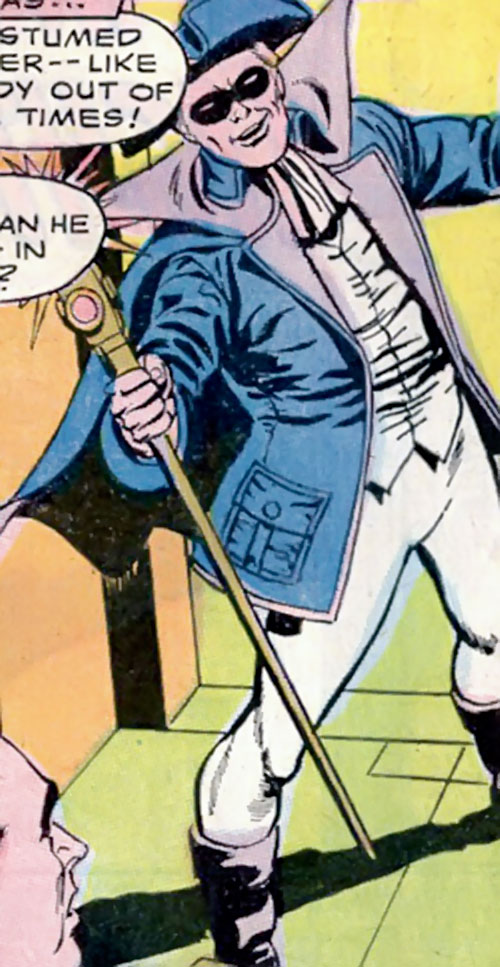 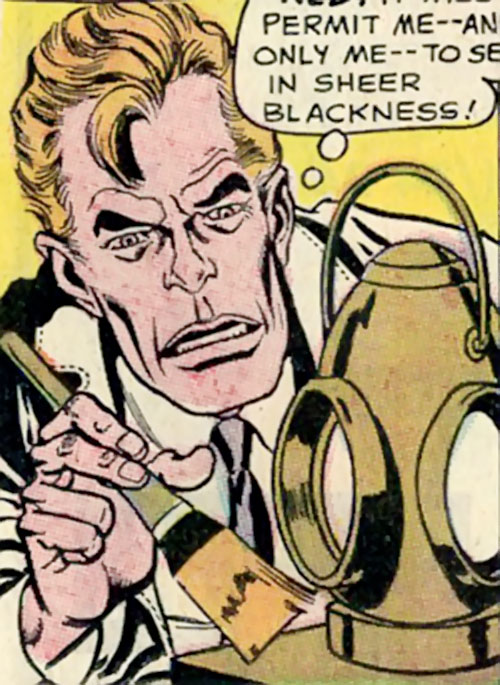