Lana Kennedy was the main character in the third issue of Global Frequency, “Invasive”. It was published in 2003. This entry has S P O I L E R S about it.

Global Frequency (written by Warren Ellis) only ran 12 issues from 2002-2004. But it remains one of my favourites. Essentially, it’s X-Files done as short, high-tempo action thrillers depicting last-resort, high-competence efforts to deal with strange threats. Ellis’ later Injection draws from the same well.

The sharp, crisp, smart writing does an excellent job at evoking complex emergency response jobs. Re-reading Global Frequency stories does feel like being with the military or in crisis management positions once again. Minus the ulcer, I guess.

Ms. Kennedy is a world-class expert in memetics , neuroprogramming  and xenolinguistics. She has an exceptional intellect and power of analysis.

Lana clearly had exposure to at least one non-human language, as she was able to read and even write in it. She could understand how this form of communication memetically rewrote minds, practically in real time.

Kennedy is also exceptionally resistant to having her mentality overtaken, since she understands how such takeovers work.

Beyond her superior intellectual acumen and rare expertises, Lana has no special training. Her crisis management methodology is to stand frozen in fright and repeat “Oh Jesus”.

Even as a little girl, Lana Kennedy was fascinated by memetics. Discussed in the mid-1970s by Dawkins and Hiscock, memetics frame the evolution of cultures and concepts as that of genes propagating themselves.

By age 14, she had begun formally studying memetics and neuroprogramming.

(Based on this combination of fields, one suspects that Lana’s childhood inspiration came from science fiction novels using the “language as a virus” concept. Snow Crash  may have been her impetus – it was published in 1992, and Lana could credibly have been in her mid-20s during this 2002 story. But there are older tales, particularly experimental novels  published during the 1960s by William Burroughs.)

Ms. Kennedy became involved in the top-secret study of alien languages. Assessing the mental security risk they posed was one of her specialities. Since in 2002 she was familiar with the physiological responses to a neural takeover, her career also involved consulting in such cases. Her main employer was the Pentagon.

In 1999, she published a Top Secret white paper about response scenarios to alien memetic invasion. The recommendation was saturation bombing and full lethal quarantine of ground zero. Presumably, the idea was that virus-like information taking over minds would spread too fast — exponentially — for risk analysis to be done in time.

Lana’s expertise also led to her recruitment by the Global Frequency. However, her special cellphone went unused until 2002. Though her girlfriend Estelle stole it a few times for international calls.

In 2002, a Manhattanite participating in the SETI@home  project received information forming an alien language, which took over their mind. The phone lines went out in cascade, forming a distinctive pattern resembling migrating birds. The power went out in the same pattern, then Avenue B locals were taken over by the virus in the same pattern.

NYPD response was assaulted by the mind-overwritten persons, leaving three officers dead and one overwritten. This raised Global Frequency alarms. Within hours GF consultants realised that the pattern was a solid match for what was described in the Kennedy white paper.

Global Frequency’s boss, Miranda Zero, was in or near New York City by that point. GF coordinator Aleph scrambled a smart mob to assist Director Zero. A security element was thrown together under local senior GF agent Lyn Hilton, and driver Nick Cho was sent to fetch Lana Kennedy on the double.

The team went in at contact plus three hours, whilst the NYPD cordoned the area off. Zero’s main objective was to act before the US military would follow the recommendations in the Kennedy paper and raze the invaded perimeter.

Meanwhile, aerial recon showed that the infected civilians were building something. The Global Frequency people at MIT  quickly determined that it was a radio emitter. There were perhaps six minutes left before it would start broadcasting the invasive signal.

The Global Frequency team rushed to ground zero so Kennedy could analyze the original signal. Meanwhile, Hilton and her operatives attempted to non-lethally repel responding infectees.

Kennedy knew the alien language being used. She explained that these aliens were memetic units, spreading virally through communication-capable intelligences. The message was a description of their civilization that was so precise that untrained persons were taken over and joined it.

Lana realised that she could write a sort of memetic antivirus. As the clock ticked, Cho commandeered a NYPD cruiser so its public address system could be used to broadcast the antivirus. However, Kennedy’s problem was to find something to convey in the alien language that would break the takeover effect.

All you need is love

Looking at the message and the infectees, Lana realised that the alien communication was limited to distance, time and motion. They were vaguely like a flock of migrating birds, exchanging solely through their relative coordinated movements.

Therefore, broadcasting about a different form of bond, alien to the “flock”, would disrupt the description of their way of life. As she was terrified that she’d never see Estelle again and looking for something quintessentially Human to describe, Lana used the powerful alien language to describe/encode her love for her girlfriend.

This last-second broadcast, describing an idea alien to the aliens, halted the infection. Lana’s neuroprogramming code in their takeover language was a counter-invasion. The aliens broke contact to avoid being overwritten by Kennedy’s description of her romance.

The infected people passed out, but could be reanimated and recover their human mind.

The “conquest language” was likely locked away by Director Zero as too dangerous. One can imagine that Ms. Kennedy continued to study it to develop countermeasures, but Lana would clearly die rather than see the “conqueror language” used again.

Kennedy is a mousy White intellectual somewhere between 25 and 35, with glasses and ordinary casual clothes.

In 2002 she had a curvy side-swept short bob with a side parting. And an air of frightened desperation.

If you look in the dictionary under “brash”, you’re absolutely not going to find a photo of Lana Kennedy. 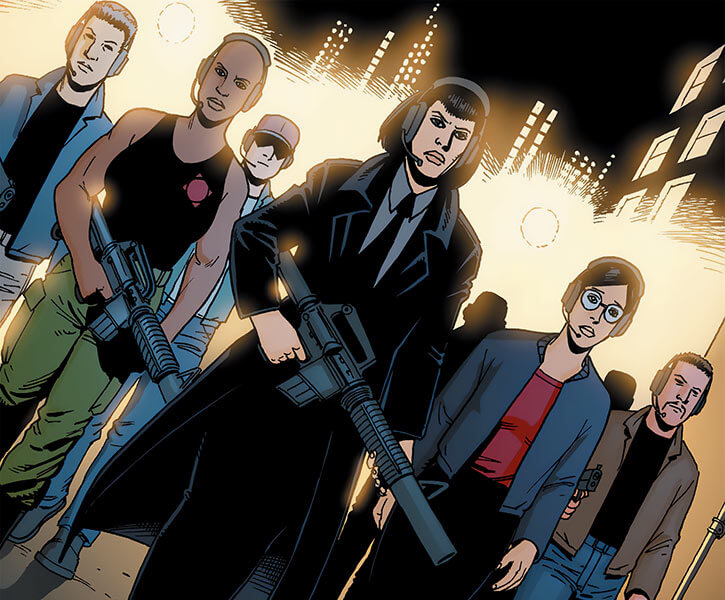 She’s a timid, anxious woman who would have been useless in the field without Director Zero’s leadership keeping her on the ball. With Zero grounding her, Kennedy could get in the zone and muster her full intellect despite the stress.

She seems to have firm ethical standards. Kennedy insisted that Hilton and her operators focus on not killing the infected persons, but stated that she wanted to be shot dead if she was infected herself. She also worried about neuroprogramming techniques accidentally altering the personality of civilians.

Lana is bisexual, though she seems more comfortable in relationships with women. She loves Estelle very much, and it is a description of their feelings in the alien super-language that likely saved the world.

Lana and Estelle are about as aggressive and prone to interstellar conquest as a pair of baby pet rabbits. They just want to be left alone, to be together and to be safe. They don’t want to expand, to exterminate, to explore or to exploit anything. And of course their relationship isn’t based on being fruitful and multiplying.

Miranda Zero: “There’s something wrong with their eyes…”
Lana Kennedy: “Haemorrhaging. Physical stress of the takeover.”

“Nobody else look at any paperwork, printouts, notes, anything. Please look away from the computer, Ms. Zero.”

(As her eyes start bleeding) “It hurts. Hard to keep thinking the same way. Kind of being tortured into believing two and two have always been five.”

Bonuses and Limitations:
Iron Will is a Skilled Power, and only works against language-based attacks.

Bonuses and Limitations:
Medicine is Regretful.

Equipment:
Lana had a Global Frequency cellphone, and an attache case with the GF logo. The case is likely an armoured one holding a laptop with heavily-encrypted databases for Kennedy to work with (say, dictionaries).

During the 2002 memetic invasion case, she was issued a radio headset with heavy-duty isolation. The headset made it impossible to hear anything but the comms. 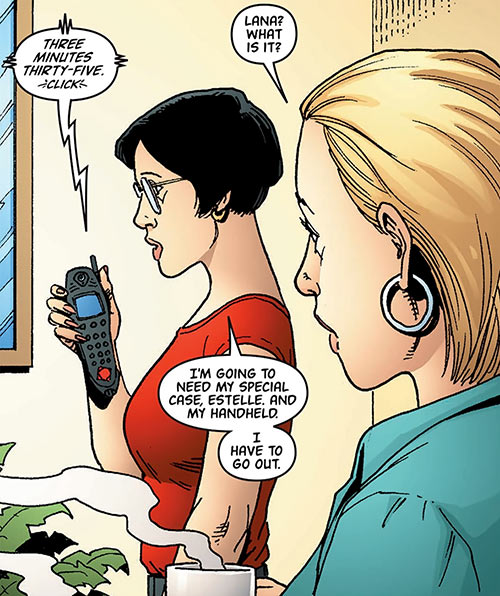 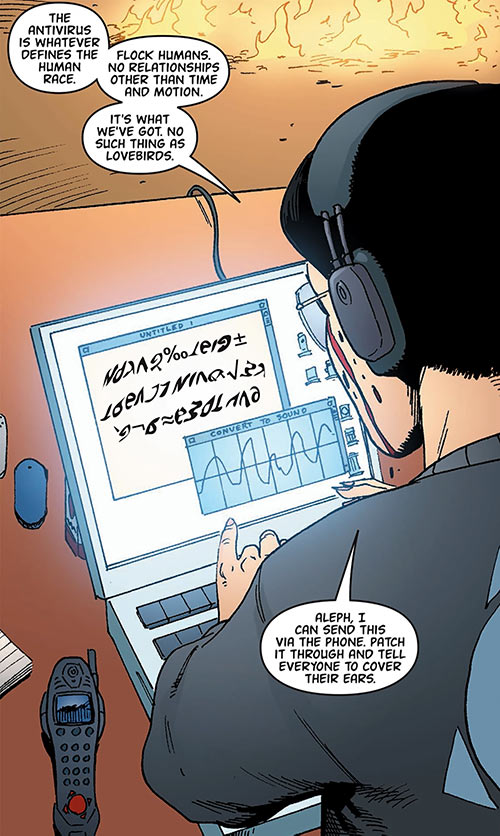