The 1980s Voltron series was based on two vaguely-related Japanese series GoLion and Dairugger XV (both originally produced by Toei Animation & Bandai, who also produced the popular Super Sentai series in Japan). The anime was dubbed and connected together by North American television production and distribution company World Events Productions.

This entry is primarily a game stats benchmark.

“From days of long ago, from uncharted regions of the universe, comes a legend ; the legend of Voltron, Defender of the Universe, a mighty robot, loved by good, feared by evil. As Voltron’s legend grew, peace settled across the galaxy.
On Planet Earth, a Galaxy Alliance was formed. Together with the good planets of the solar system, they maintained peace throughout the universe, until a new horrible menace threatened the galaxy. Voltron was needed once more.
This is the story of the super force of space explorers, specially trained and sent by the Alliance to bring back Voltron, Defender of the Universe !”

Lance is the second in command of Voltron and pilots the Red Lion. He is a tall man, both wiry and wiley, about 21-23 years of age, and is the height of mellow. Lance is always cracking jokes and teasing the others whenever he gets the chance.

Regardless of that, however, he is a great pilot, though a bit too daring at times. He is the only one in the group who has the guts to contest any of Keith’s commands — something his commander finds increasingly annoying.

Lance is also a ladies’ man. He is a shameless flirt, even around the Princess, and is not afraid to show off for any prospective women. Though this sometimes gets him into trouble, this trait in Lance is usually looked upon in amusement by his friends. It is never stated whether or not Lance ever had a girlfriend, though he did sort of have his eye on Lady Farla there for a while.

Of course, with the Princess always giving him kisses on the cheek, it is unsure where his affections lie.

Lance can get pretty hot-headed at times, as Keith wholly knows. He sometimes acts irrationally to make his way work. Sometimes it does, sometimes it doesn’t. No matter what, Lance’s heart is always in the right place.

The intro and closing sequences, admittedly in poor quality (so watch it small).

Lance: “Count me out, I say we’ve been polished enough.”
Keith: “Grrrrr ! Let’s see if your reflexes work as good as your mouth !”

RED LION ROBOT [DEX 07 STR 09 BODY (Hardened Defenses): 15, Claws: 10, Energy Absorption: 15, Flame Immunity: 10, Flame Project: 10, Flight: 15, Radar: 20, Running: 06, Sealed Systems: 20 ; Limitation: Power Reserve is dependent on all five Lions joining together to form Voltron in order for it to activate, and is fueld by Energy Absorption (APs of Power Reserve are distributed to Voltron’s Physical Attributes, with most going towards his Blazing Sword) ; Drawback: Loss Vulnerability: The Red Lion requires a periodical dose of heat, fire, and/or lava to keep it running].

The RED LION ROBOT has the following subsystems: 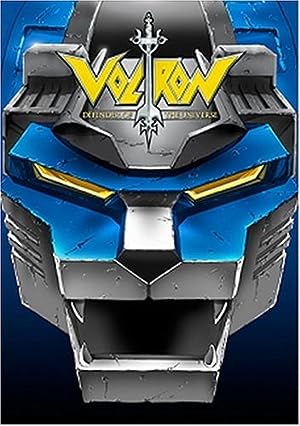 Voltron – Defender of the Universe – Collection One: Blue Lion