Ms. Croft experiences accelerated growth on Yamatai, both in terms of mental maturation and in terms of skills development. Though she ends up in a sorry state, she is also considerably hardened – and deadlier.

She is now a genuinely dangerous archer, gunfighter and melee combatant with remarkable endurance and reflexes. She is also a particularly fast and agile athlete. At this stage, Ms. Croft has proven that she can survive an unending avalanche of catastrophic odds, and keep winning.

She’s essentially fought through a terrible war and is now a combat veteran, and she did it all on her own. 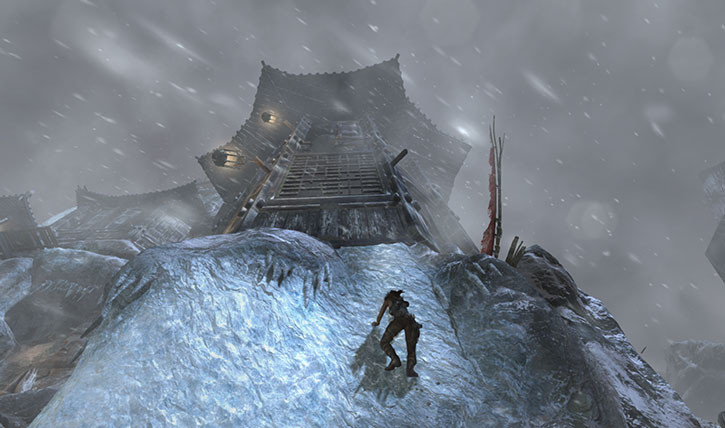 She is also more perceptive, and appears to have naturally keen night vision. This is represented in-game by improving her alternative vision mode.

Her rock climbing, mountaineering and athletic skills, which were already excellent, are now superior. Lara climbs some pretty scary stuff, and is quite used to ignoring any fear of heights she might have.

In the last sequence before the epilogue, Lara first uses her signature paired pistols technique. Howbeit, this is not a skill she has during the rest of the game.

Her arsenal has considerably evolved :

Her trusty climbing axe is still there, and she’s quite proficient at killing people with it if necessary.

Her bow is now a high-end archery competition model, powerful and accurate. Unless she’s severely outnumbered it’s actually a viable weapon to take to a gunfight, especially since she can get an arrow, nock, draw and release with lightning speed.

It is also silent enough to be used as a stealth assassination weapon.

Beyond her standard broadhead she has improvised a number of devastating speciality arrows : 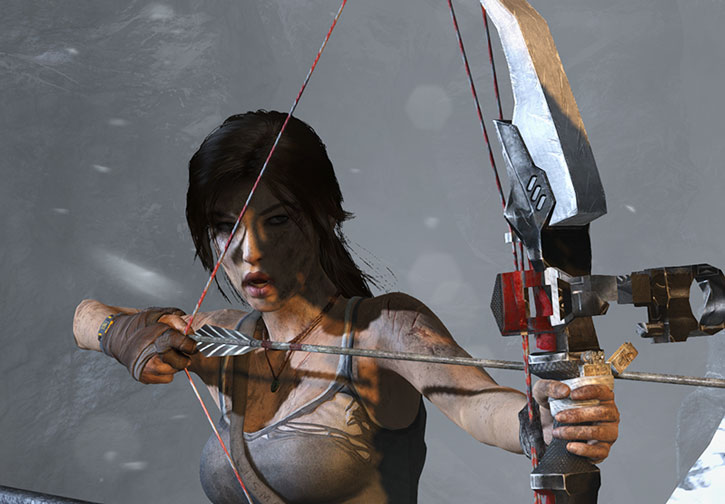 Note the archery handwraps and the lighter.

Her handgun is now a Desert Eagle – though the in-game model seems to be chambered in .50AE, the intent is apparently to have it be the chambered in .357 Magnum with custom +3 magazines.

She carries a custom silencer for it, for sentry elimination. Lara also retains one of Roth’s signature customised Remington M1911 R1 Enhanced pistols as a memento (Sam has the other).

Lara has started carrying a shotgun. As in many video games, shotguns in Tomb Raider have an impossible spread and thus become useless at range. Even the .380 ACP pistol may be a better choice against opponents 5+ metres away.

This property makes them good at blasting certain obstacles, though. Shooting a shotgun at barricades at point blank is about as good as having a large guy taking a sledge to them for a bit.

The in-game best model looks more or less like a Franchi SPAS-12, but the weapon is presented as a high-capacity weapon that can alternate between buckshot spreads and more focused, longer-ranged attacks. Having a Neostead-type shotgun would make more sense, with the longer-ranged attacks being slugs.

The old Type 100 SMG was replaced by an AK-type rifle, then with… something that looks like an eccentric blend of Ultimax 100 and AK.

Since it’s called a “commando rifle” and a DLC includes a HK416 rifle, widely considered as an excellent specops assault rifle, purists in search of verisimilitude may consider that it’s actually a HK416.

This weapon is eventually equipped with a low-powered scope, a dual-magazine clamp and a detachable suppressor. Lara has also tied an old grenade launcher to the side – it’s not pretty but it works, though the range is way shorter than a modern grenade launcher’s. 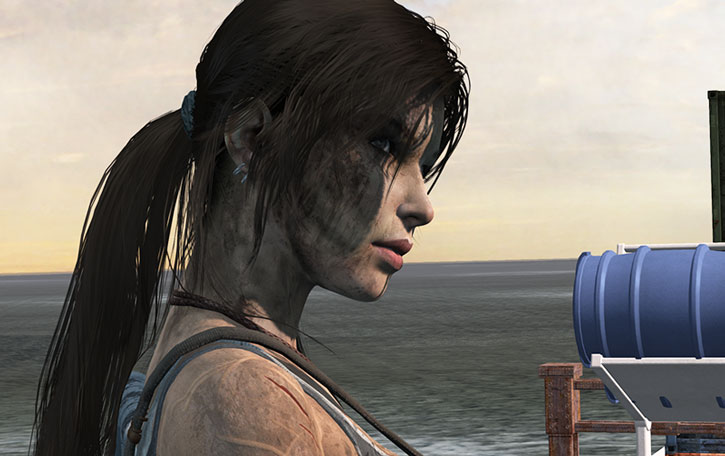 Being a video game character, she can of course carry all of her equipment at once, as well as (with in-game skills upgrades) improbable amounts of ammunition.

Over the course of the game Ms. Croft ends in a frightful state. She’s covered in blood, mud, sweat, dirt, grime, etc. and battered and wounded, though her clothing holds remarkably well.

Her wounds tend to fade away impossibly quickly, though, and numerous immersions in water and rain wash away the worse of the grime. Still, in Yamatai, Lara usually looks exhausted or even haggard – a product of the harrowing circumstances.

On Yamatai, Lara is terrified and overwhelmed by what is happening. She’s just a normal student, alone, wounded and shocked. However, she has been trained in the basics and this takes over, letting her set up camps, hunt to feed herself, tend her wounds and manage her survival.

Her back to the wall, she is forced to endure enormous pain, fear and stress — and commit considerable deadly violence — to survive. 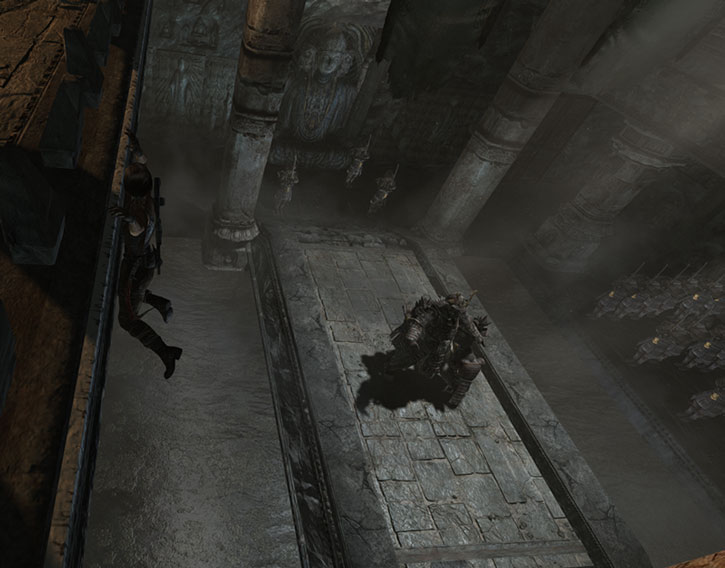 Ms. Croft living on the edge.

Though she’s absolutely miserable and scared shitless, Ms. Croft’s exceptional instincts let her grow and harden by the hour as she endures and overcomes.

She gradually affirms her courage and resolve despite the situation – since what she’s experiencing is better described as survival horror rather than as “an adventure”.

Croft doesn’t actually want to do any of this. Her idea of a good time is scholarly research, and even killing animals for food initially made her sick and guilty. But she *has* to to stay alive.

Amusingly, Lara seems to briefly but completely forget the pain and fatigue whenever she discovers relics and documents of archaeological interest, excitedly assessing them for approximate date and cultural context.

Lara feels terrible about having convinced Roth to sail into the Dragon’s Triangle, given the consequences it had. This decision wasn’t different from what Whitman would have made out of ego, and she’s determined to never do that mistake again. 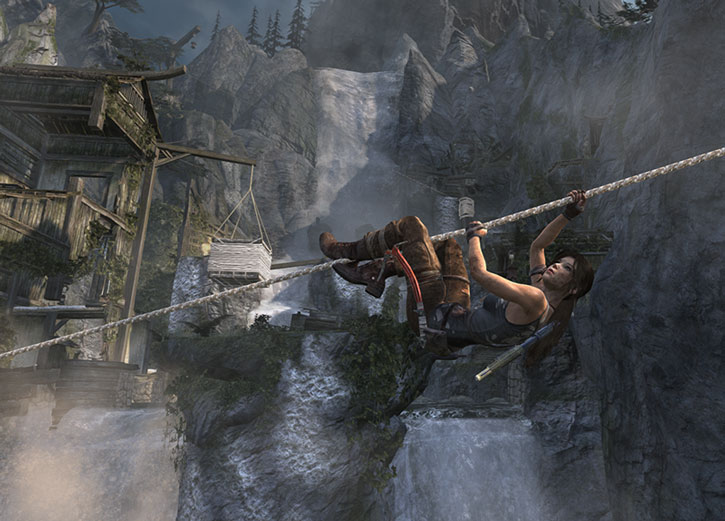 Ms. Croft feels responsible for everything bad that’s happening on the island, especially certain things we won’t mention to keep this section spoilers-free.

As she leaves Yamatai, Lara is aware that the paranormal exists. This also means that her father was right all along, and those who mocked his “delusions” were wrong. Which means in turn that she has to know more and understand what is involved – like Mr. Croft before her.

On the other hand, she also has to deal with PTSD  after the massive stress and consequent trauma from her baptism of fire.

“There are traces of white paint on the inside. Whoever used this mask was of noble birth.” 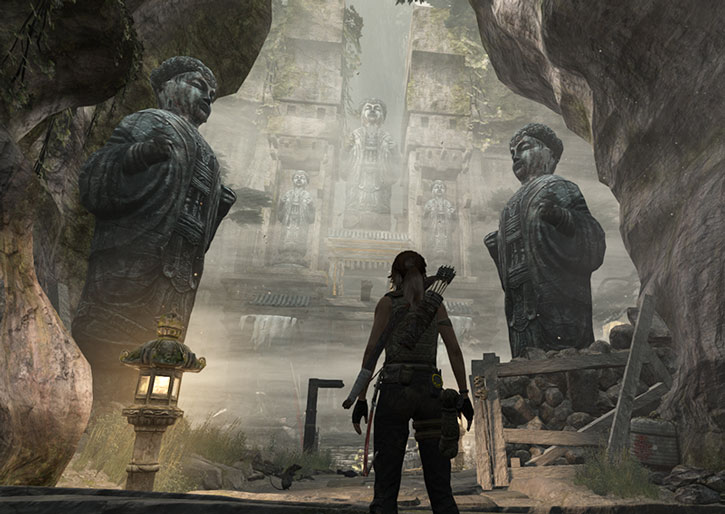 (To herself, in exhaustion) “Keep moving. Keep. Moving.”

Drawbacks:
Dependents (survivors of the Endurance).

An important note for this Genre values is that Lara has much more Hero Points than you’d expect for a youth on her very first “adventure”. And that everybody else has considerably less than they would in another stories.

Though several persons on the Endurance are tough and experienced (Conrad, Joslin, Jonah…) they probably have about 5 HPs, whereas you’d expect them to have 10 or perhaps even 15 based on similar characters. In contrast, Lara burns through *hundreds* of Hero Points on Yamatai as she gets her Awards. And that’s at the very favourable Action Genre rates.

Note that these values are for the video game, which features an unrelenting stream of challenges, catastrophes, fights, bad breaks, dangers, etc..

The pacing of, say, the comic books is less hectic and doesn’t require these Genre tricks. You can probably use the Gritty Genre for stories in the style of the comics.

Earlier during the research, the HP economy of the game was summarized as “Lara operates in Action and everybody else is in Gritty”. This isn’t a bad summary, though going with just that felt a bit sloppy rules-wise.

Source of Character: Tomb Raider (2013 video game) plus the comics Tomb Raider – the Beginning by Rhianna Pratchett and Tomb Raider – Season of the witch by Gail Simone. Lara voiced and motion-captured by Camilla Luddington.

Helper(s): Darci, Coyote’s Own, Ethan Roe and everybody who explained the solution to the sodding QTE with the wolf, and the one with the collapsing bridge where controls get inverted. 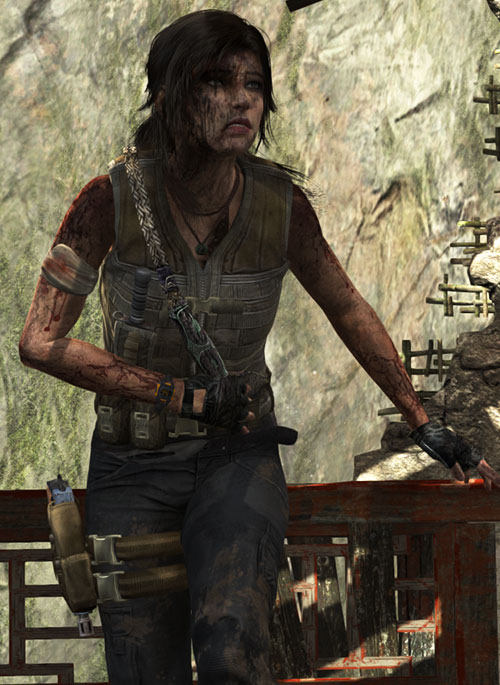 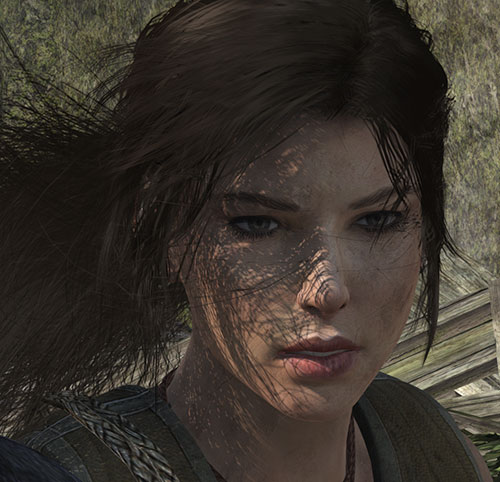 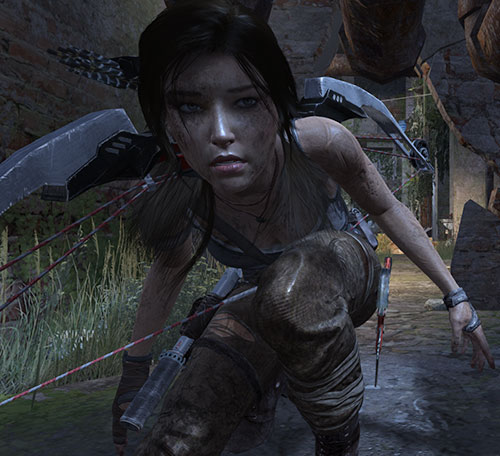 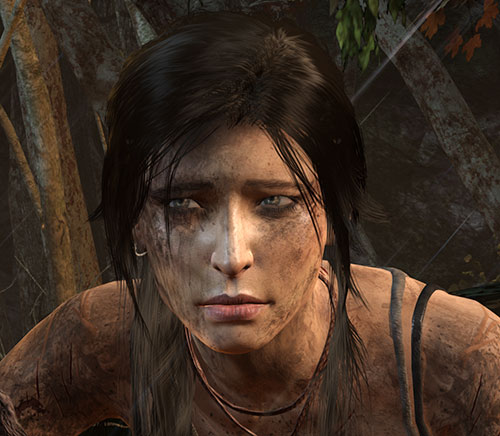 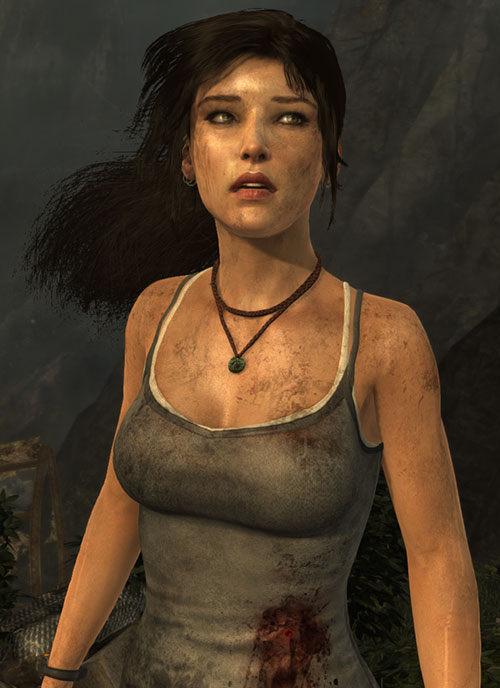 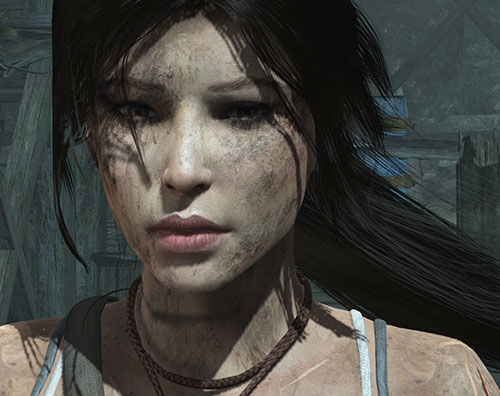 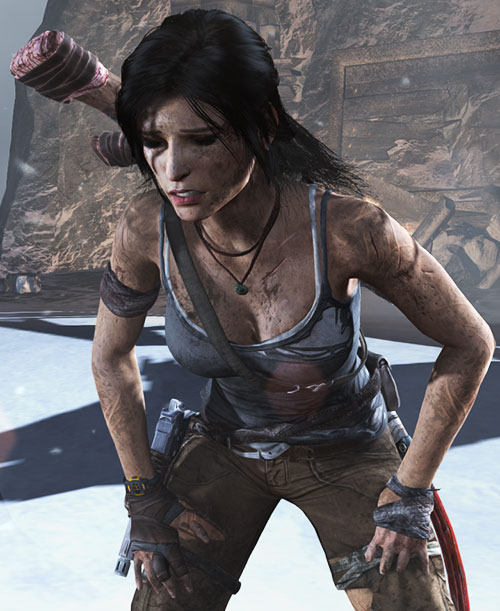 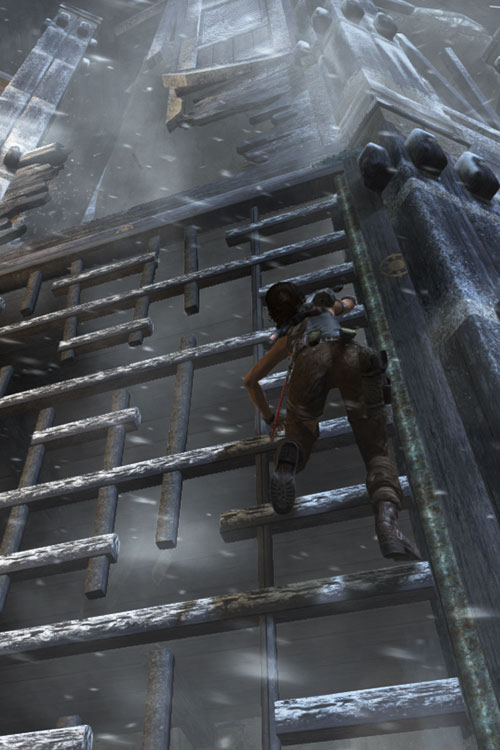 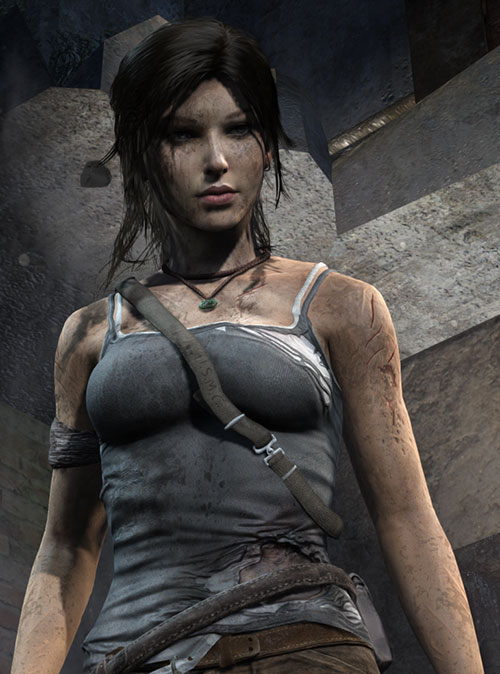 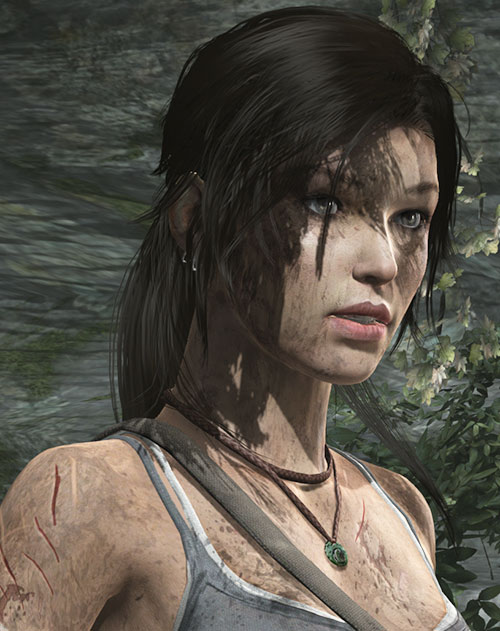 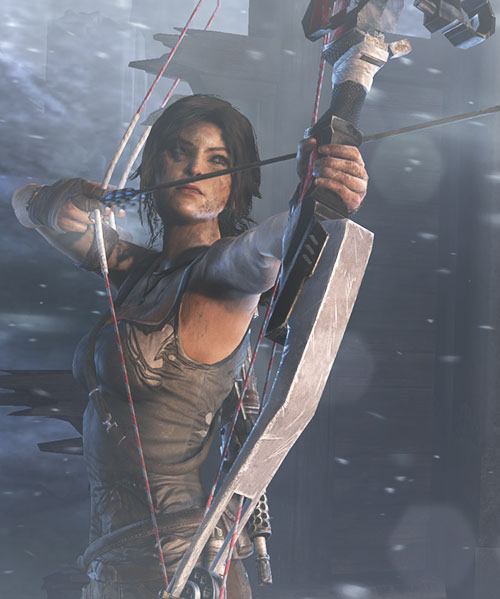 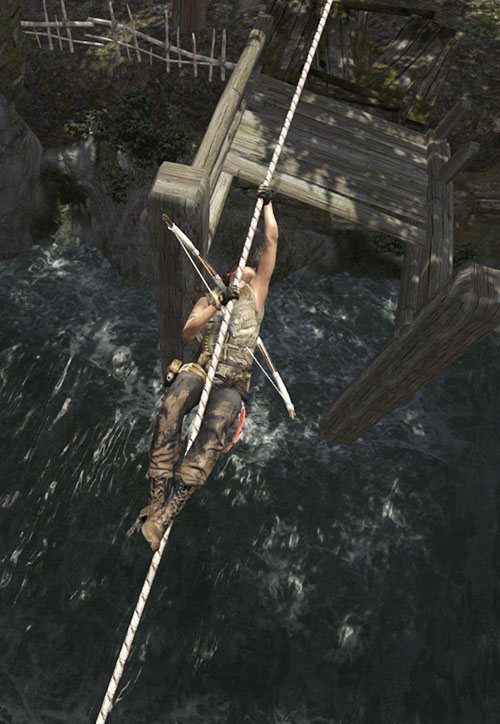