At first glance Lara appears to be an ordinary kid, albeit in excellent health and studying for a top-shelf MA in Archaeology program.

However, the building blocks of what will eventually make her a major adventurer are already present in their basic form : 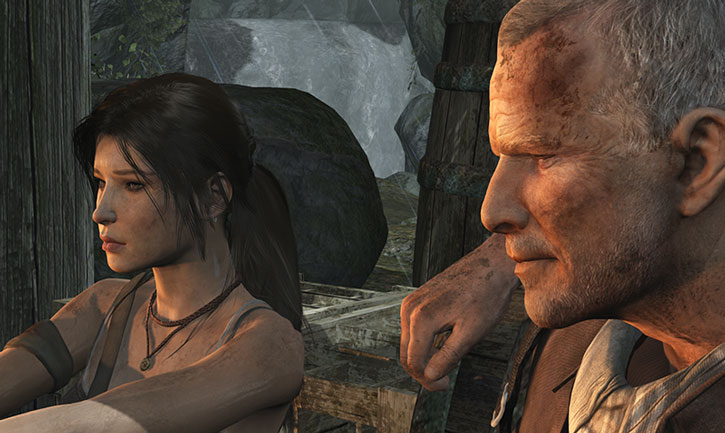 After the wreck of the Endurance, another asset becomes apparent. Croft has amazing survival instincts. At rest she isn’t genuinely fast, strong, precise or determined… But when she’s fighting for her life she can be incredibly dangerous and intuitive. Lara can emerge in one piece from situations that should reasonably have killed her four times over.

Ms. Croft has excellent reflexes. Nothing cinematic, but enough to pass the critical “be faster than the other guy” test when faced with mooks. And when she has to, she runs real fast.

Though she lacked the strength and mass to support her mentor Conrad Roth (who admittedly seems to be about 6’3” and 230lbs) when he passed out, Lara repeatedly demonstrates a remarkable strength-to-weight ratio as a rock climber. She’s not going to powerlift any heavy stuff, but she has serious pull-up power.

Lara is fluent in Japanese, and presumably several other languages.

Tomb Raider follows common modern gameplay conventions. Thus, the “hit points ” of the heroine quickly refill. This low-key healing factor  is even present with wounds that are part of the story rather than in the gameplay. 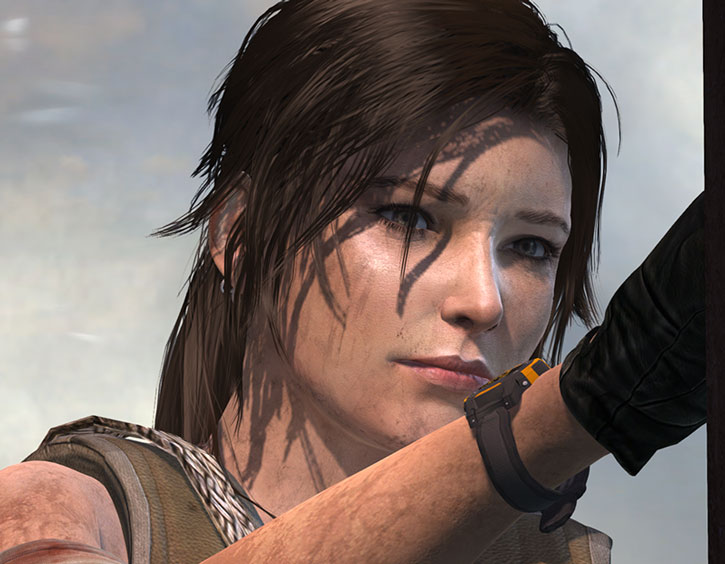 For instance, Lara’s abdomen is pierced early on by a metallic debris – though it’s her flank and it presumably narrowly misses puncturing an organ. Albeit this wound is clearly painful and a major tetanus and infection risk, it somehow goes away over a day or two.

There are also various examples of flesh wounds that are visible in cutscenes, but no longer around after Ms. Croft can rest.

In DC Heroes RPG terms this is treated as a mix of narrative immunity (better Genre meaning faster Recovery Rolls interval, and an ability to turn all damage into flesh wounds via Last Ditch Defense) and a minor healing factor. Like many modern video game characters do, Croft heals even faster than non-regenerative super-heroes and action movie heroes.

Bad wounds certainly happen in Tomb Raider. It’s just that Lara Croft magically sail clear of those, and what damage she does suffer just discreetly fades away. 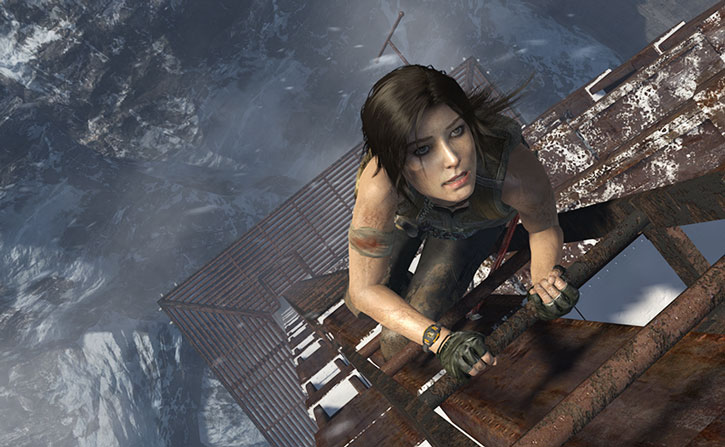 She also carries her trusty torch, which comes in quite handy – especially after she found a striker. The latter is a piece of metal she can rap her climbing axe against, creating enough sparks to light up her tirelessly reignitable torch. She also finds a two-way ruggedized, waterproofed radio handset which she uses to communicate with other Endurance survivors.

Lara later procures a handgun. Though the in-game model is some Beretta 92 variant with wooden grips, a better match for the in-game performance and ammunition capacity would be an older model, the Beretta 82 in .380 ACP. With this calibre and a small magazine (8 shots, though Lara soon finds a +2 magazine) the 82 is, by modern standards, more a self-defence weapon than a combat piece.

Ms. Croft also finds a Type 100 submachinegun. This is a typical World War Two Japanese SMG, which as it shapes suggests is a variant over the German MP18. Since it goes through ammunition very quickly this is more of a last resort weapon when beset by multiple opponents. On the other hand, 8mm Nambu rounds aren’t too difficult to find on the island.

The better trailer, in HD.

Lara is the daughter of famous British archaeologist Richard Croft. During her teenage years she often accompanied her parents on expeditions. Perhaps as a result, she decided to study archaeology at the famous University College of London.

A frequent associate of Richard Croft was Conrad Roth, a former Royal Marine Commando. Roth hired himself out as a diver, fixer, sailor, security man and general explorer type. 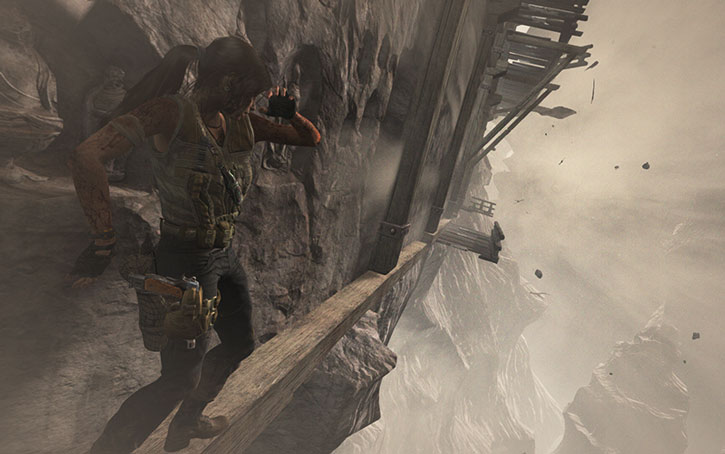 Mr. Croft disappeared in unknown circumstances. No mention is made of Lara’s mother. One scene in Tomb Raider – The Beginning depicts Roth getting drunk as he tries to forget about missing friends he cannot locate – these might be the Crofts. All other dialogue seems to assume Lara’s parents are dead, though.

Lara described herself as upper class, but doesn’t seem to have any money. Perhaps her parents are still considered missing and thus not legally dead.

One gets the impression that Mr. Croft spent his money and reputation investigating off-the-beaten-track research projects. He was apparently seen as a dreamer focusing on tall tales of magic and lost civilisations. Though determined to become an archaeologist, Lara promised herself that she would stick to more realistic and shorter-term goals, to build up her professional reputation.

On the other hand, Richard Croft was an exceptionally intelligent and capable man. And he apparently was a very competent adventurer.

Needing to save up to pay for her MA in Archaeology and Heritage of Asia at UCL  after the loss of her father, Lara became a deckhand on Roth’s battered ship, the Endurance. After the death of her father, Roth became a substitutive father for her, and he came to treat Lara as if she were his daughter. 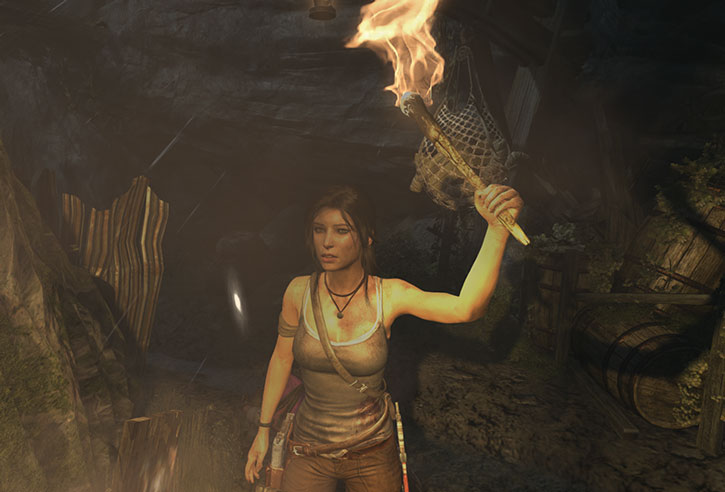 Early during her undergrad studies Lara met her best friend, Samantha Nishimura, a cinematography student from the US. Though they were almost polar opposites, they bonded over a common love for Jaffa Cakes  and became inseparable

One of Croft’s professional projects was to investigate the tale of the witch-queen Himiko. This is an old Japanese legend about an ancient empress and her lost kingdom of Yamatai. Though she had originally learned about it from Sam Nishimura — whose grandmother knew many tales about Queen Himiko — Lara reviewed the literature.

After extensive research, Croft deduced that the origin of the legend was one of the islands South of Japan, in a bad weather area called the Dragon Triangle.

Yamatai, Himiko and the Dragon Triangle (aka the Devil’s Sea) are all legends in the real world, rather than fictional elements created specifically for Tomb Raider. 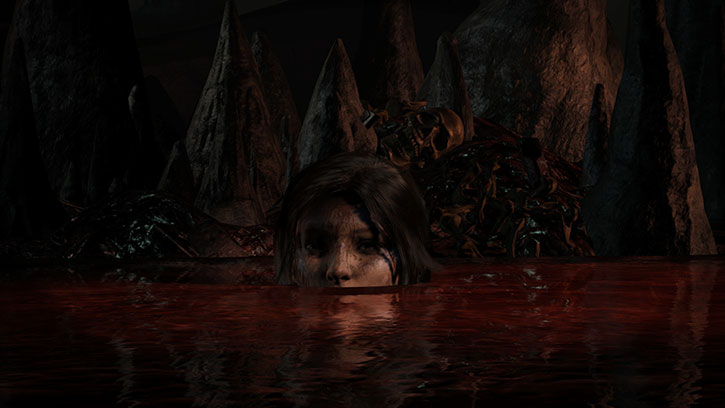 Not too long after her 21st birthday, Lara ran into a minor celebrity whom she admired. It was Dr. James Whitman, the star of a field archaeology show on American TV. The show was in its second season, and Whitman and his 2-person media crew hired the Endurance and her crew for transportation and general support.

However, the network abruptly opted not to renew the show for a third season. They recalled their staff. 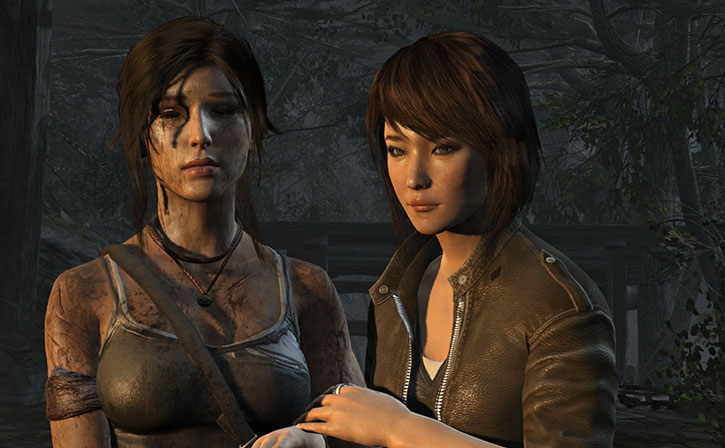 The greedy and self-centred Whitman had grown very attached to his fame. He wanted to film a big-time discovery to reestablish his media cred. His main idea was to attempt to discover the truth behind the Yamatai myth.

Since Lara was coincidentally knowledgeable about it, she could be his researcher. Whitman decided to turn an expedition to Yamatai into a movie and take all the credit for any discovery.

However, Whitman couldn’t finance the expedition anymore. The naïve Lara wanted to help, and arranged for financing via Sam Nishimura’s uncle, a hard-nosed Japanese media mogul.

Sam also joined as the new camera operator and director for the Yamatai investigation documentary. Sensing that Whitman was a jerk, Sam shot extensive interview footage of Lara working, to prove that the scholarship was hers.

As the Endurance sailed toward potential Yamatai sites, Ms. Croft and the rest of the crew grew disenchanted with Whitman’s movie star temper. There was a verbal fight between Croft and Whitman about which location to explore first.

Trusting Lara’s instincts, Roth decided to first sail to the locations she suggested, in the Dragon’s Triangle. 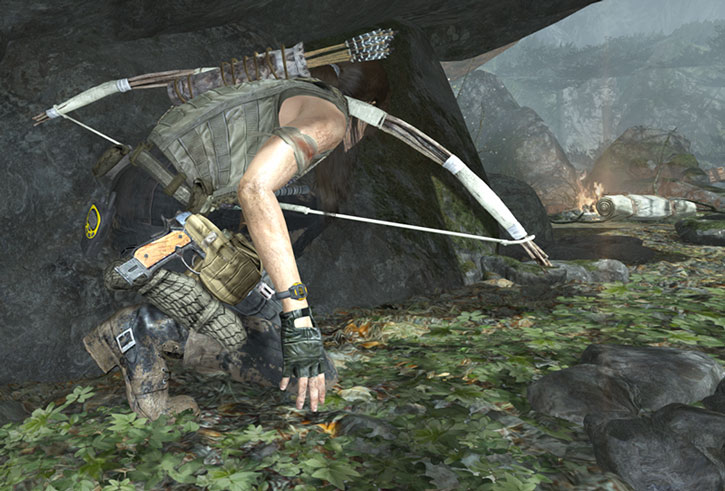 While sailing near a Dragon’s Triangle island at night, the cargo ship was hit out of the blue by a raging storm. Lara was woken up by the ship nearly capsizing. By the time she could get out of her bunk the Endurance was disintegrating and sinking.

Though she narrowly got out, Lara couldn’t reach Roth in time and was washed ashore, alone.

After waking up in a coastal cavern and narrowly surviving a nightmarish experience, Ms. Croft could take a first look at the island. She witnessed a graveyard of all sorts of boats and airplanes, many of them centuries old, wrecked against the cliffs.

This wasn’t looking good. At all.

On the Endurance Lara is typically wearing big brown leather biker boots, tight cargo-style pants, and a blue-grey tank top with a white camisole top underneath. She also has a small pendant, whose main stone might be jade. One imagines that the latter was a gift from her parents.

The outfit is recognisable as a more sensible and less objectifying variant on the classic Tomb Raider turquoise bathing suit and olive green short shorts. 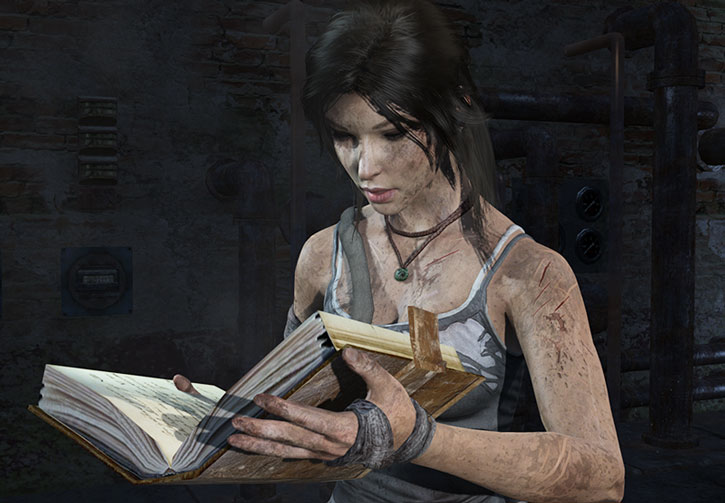 She wears tough leather semi-fingerless gloves (or leather and fabric hand wraps, depending on the outfit), which are quite important when it comes to her daredevil athletics. These double as archery gloves.

She has a readily audible English Home Counties accent (video) , but makes an effort not to have a posh RP one. Her usual drink is Earl Grey.

Lara’s physique and overall pulchritude can be distracting. She seems to be on the short side – but this may be because the men on the Endurance are unusually tall. And anyway, being small is helpful when hunting for cover.

Lara is originally a bookworm. She’s a very serious undergrad, who didn’t seem to fit in well with her peers. Her best friend Sam is much more outgoing, and ensures that Lara lives a little, goes out and does fun things rather than spend her entire life in libraries.

Early on Lara might even be called mousy. But she can be more assertive when defending her work and her dream of becoming a great archaeologist.

Though her friendship with Sam got her out of her shell a bit, Lara is a loner. She feels uncomfortable when people are paying attention to her. Samantha was, in fact, her only real friend.

Young Lara experiences huge enormous growth in character on Yamatai, an island of a thousand dangers and horrors. It reveals her to herself as she discovers just how strong and amazingly capable she really is.

Lara (shocked): “They’re killing people… I don’t know who there are. I had to kill some of them, I had no choice.”
Roth: “Can’t have been easy.”
Lara: “It’s scary how easy it was.” 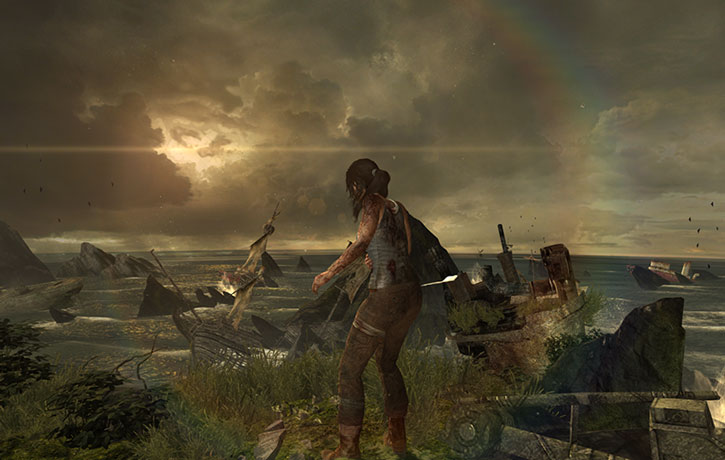 “This coin probably found its way into Japanese circulation sometime in the mid-XIXth century. And that… that is an Edo period  coin, minted in the late XVIIth century. It could have come from any of the old wrecks on this island.”

Roth: “Listen Lara, we have to help our own, not him. You have to learn to make sacrifices.”
Croft (angry): “I know about sacrifice !”
Roth: “No, you know about loss. Sacrifice means you make a choice.”
Croft: “And I won’t choose to let him die.”

And said second half of the Lara Croft (2013 take) character profile is there.

Drawbacks:
Dependents (crew of the Endurance).

Genre:
Gritty… but see the second writeup for more. 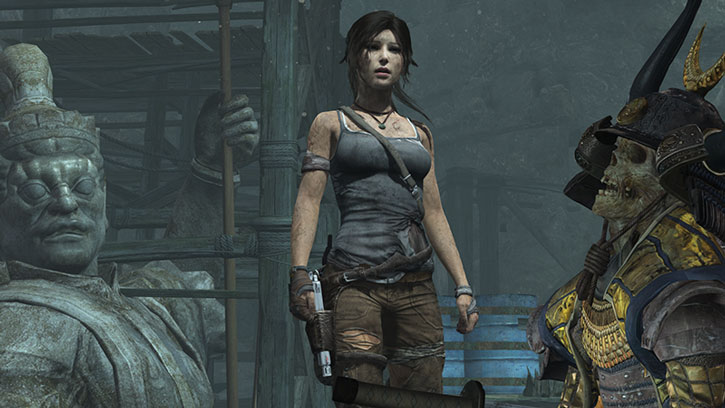 Source of Character: Tomb Raider (2013 video game) plus the comics Tomb Raider – the Beginning by Rhianna Pratchett and Tomb Raider – Season of the witch by Gail Simone. Lara voiced and motion-captured by Camilla Luddington.

Helper(s): Darci, Coyote’s Own, Ethan Roe and everybody who explained the solution to the sodding QTE with the wolf, and the one with the collapsing bridge where controls get inverted. 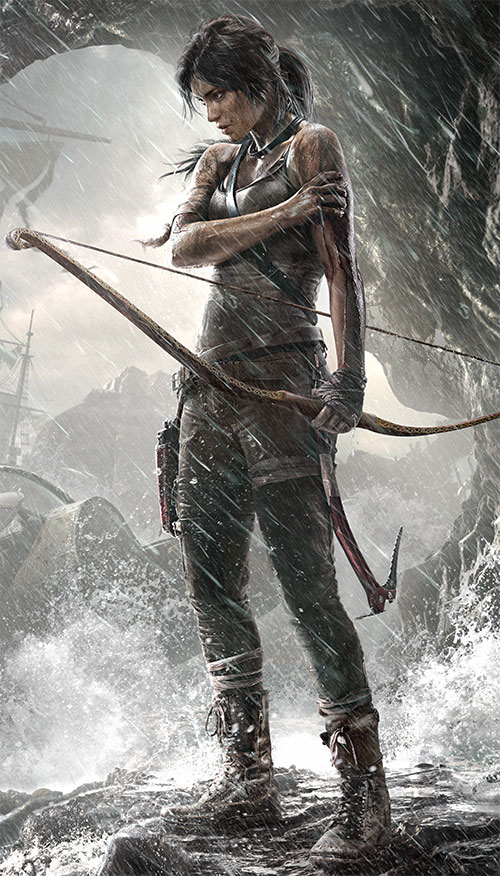 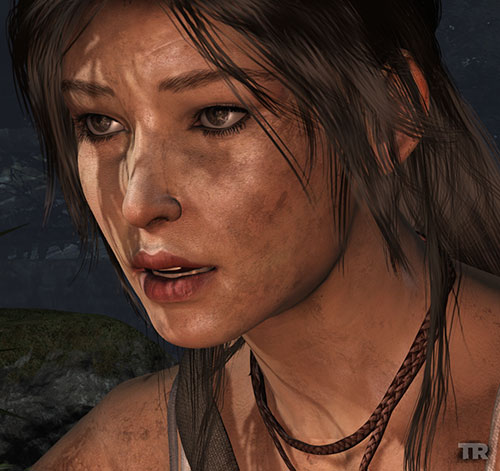 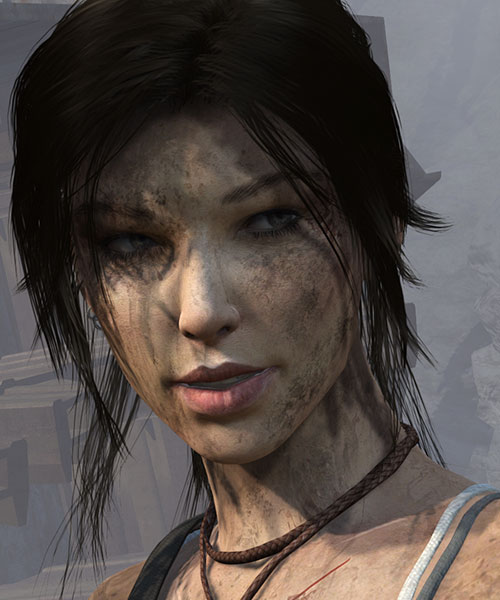 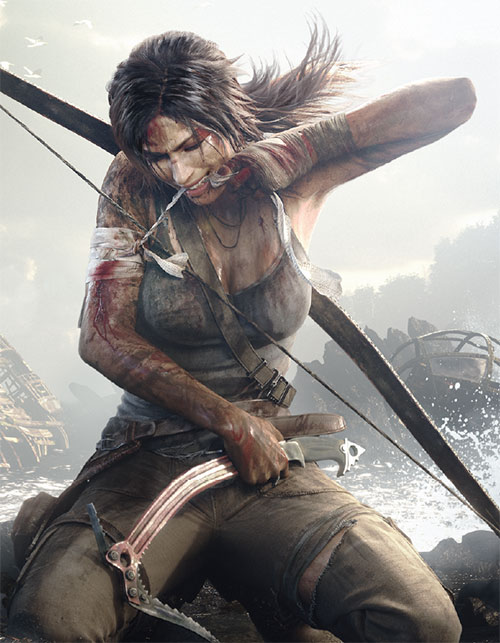 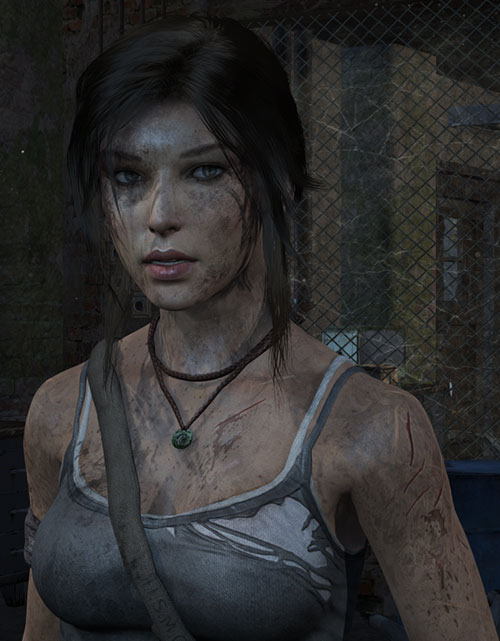 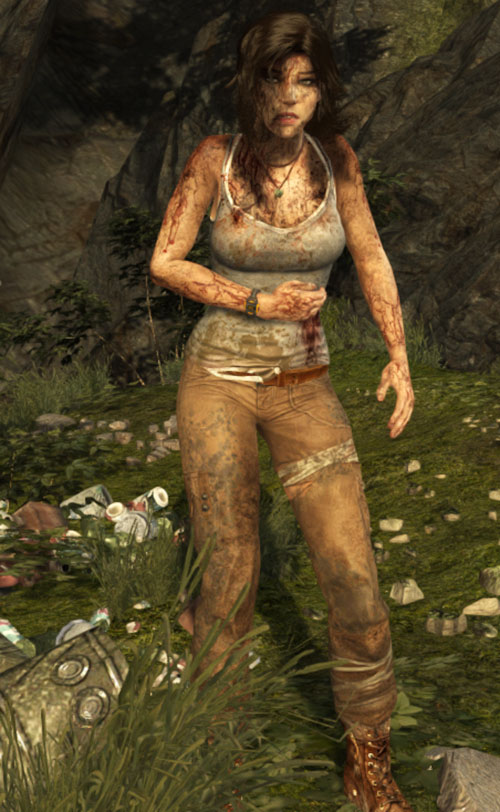 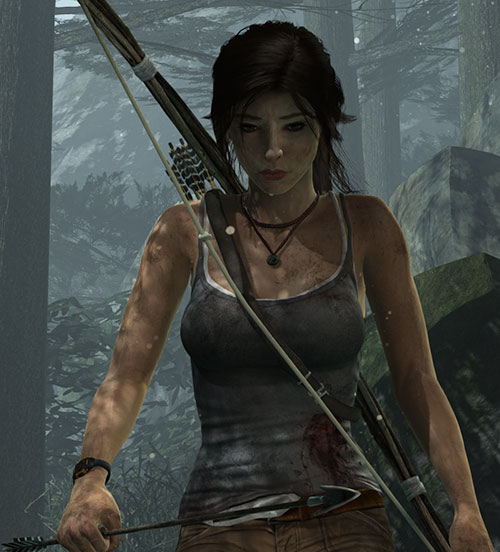 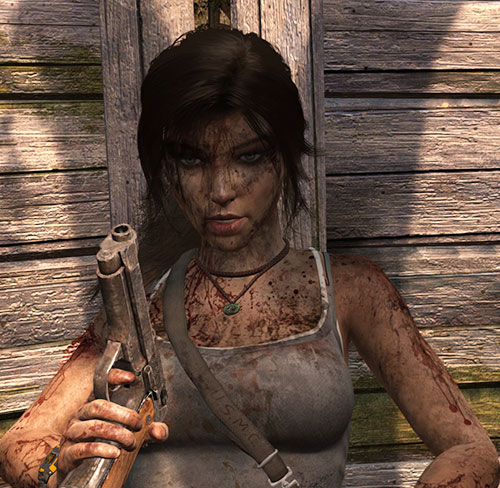 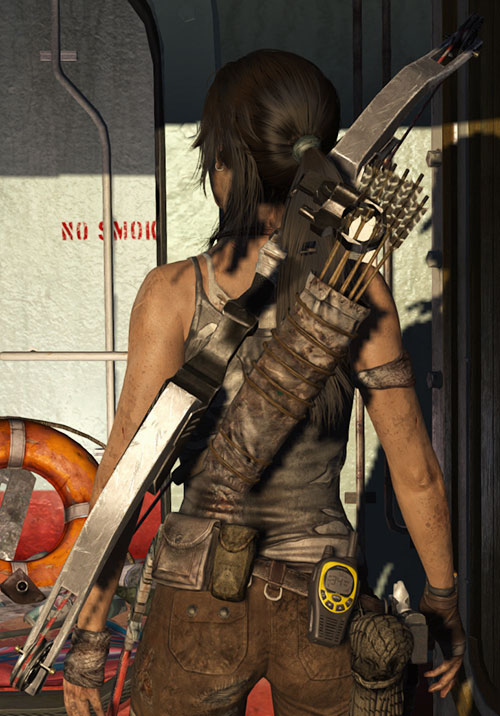 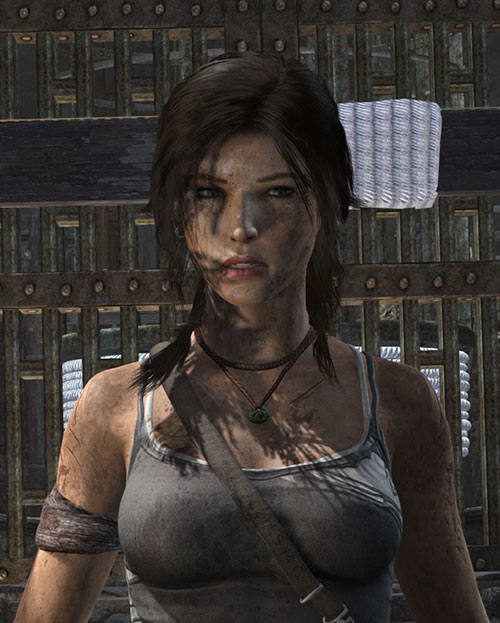 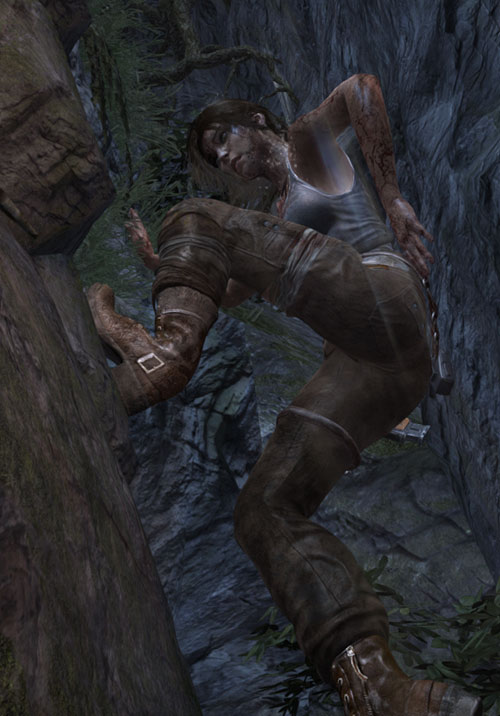 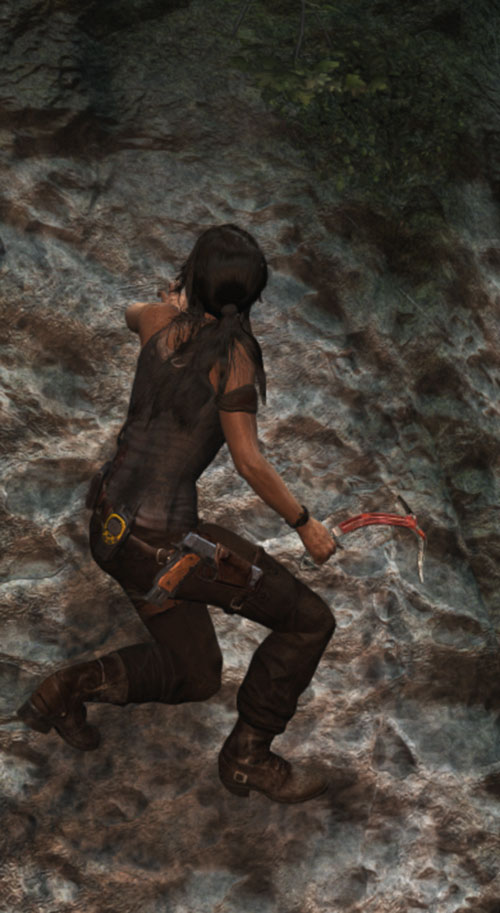 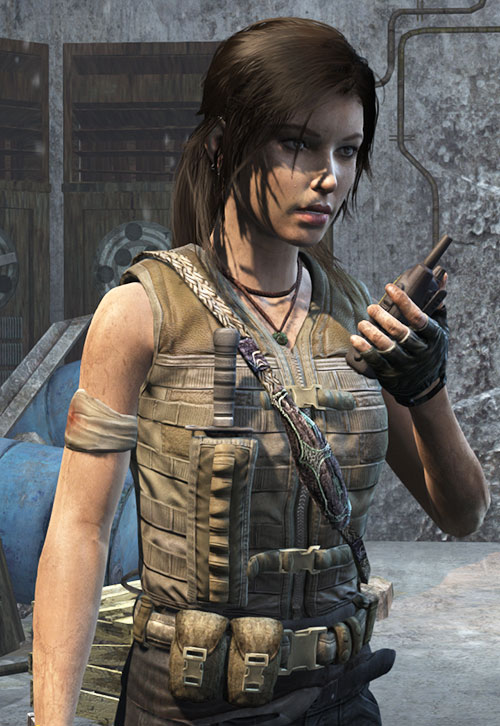 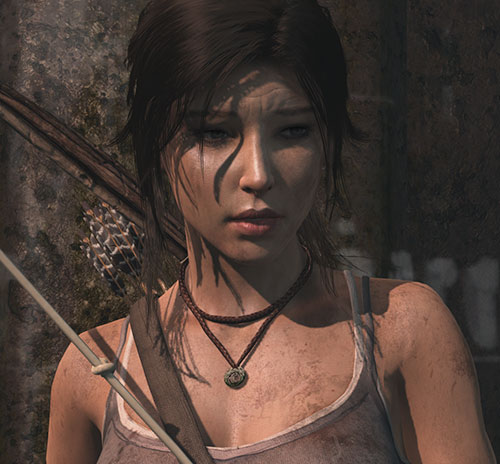 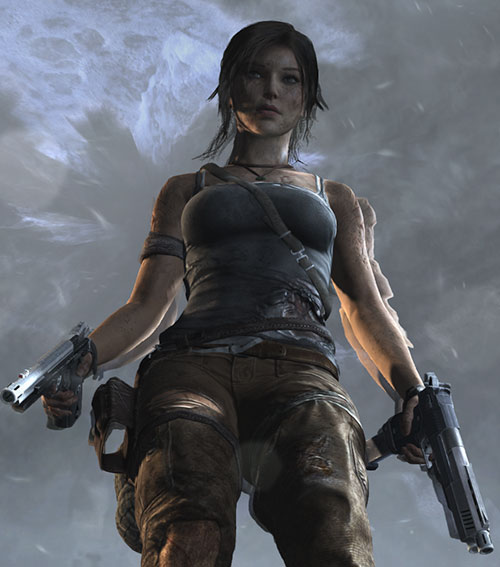