This net was tough enough to hold Spidey, too.

She could also predict when and where Spider-Man would be swinging by. How she did that is unrevealed. Perhaps she has potent cosmic reality altering control psychic divine powers ! Perhaps she really is Jim Starlin  ! Or vice versa !

“Spider-Man in the Trap” appeared in Iron Man #135, among others.

Larcenous Lil, Green Turtleneck Thug and Purple Turtleneck Thug have set an ambush for Spider-Man. When Spidey swings by, Lil orders her men to drop the net. And man, does it ever get dropped ! Spider-Man is caught ! He cannot escape ! “Right, web-head. You’re going on a one-way ride !” chuckles Lil.

Spidey convinces Green Turtleneck Thug to free him from the net by offering him an Hostess® Twinkie®. ”I can’t resist this golden sponge cake, great creamed filling” exclaims the criminal, who seems to have a curious relationship with grammar.

Though Larcenous Lil did escape, Spidey soon captures her in her lair.

In 2009, June was seen in the S-Wing of an unspecified New York prison. Her name was given as Lilith Moll, and she was significantly older.

She briefly participated in an accidental breakout, but everybody was brought down using sedation foam. 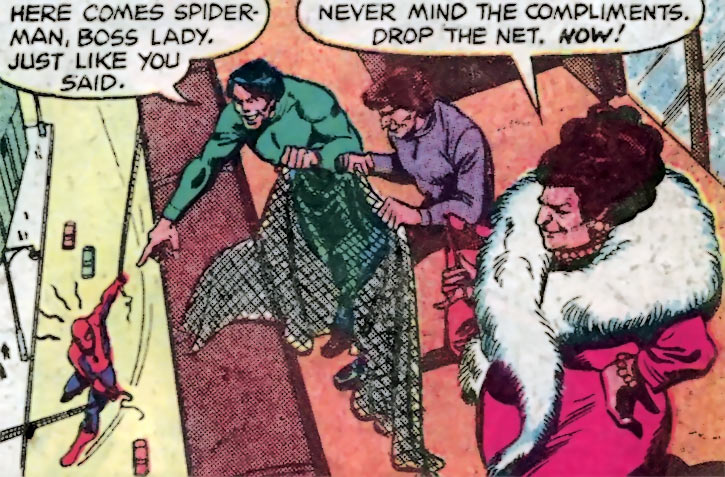 With that outfit you’d think she’d be Fuschia Fran, or possibly Maggie Magenta depending upon the ink fade.

But no, she’s the one and only Larcenous Lil.

Equipment:
The Net she used back in her wild heydays had about BODY 11, Snare: 11, but no AV of its own.

These guys have basic thug stats and medium semi-autos. And turtlenecks. We all had turtlenecks back then. These were made of some cheap synthetic fabric, I forget the specifics… man, I hated those. I did, strewth.