Larry is, despite his short size, built like a Mack truck. He is incredibly strong and fast. Larry once knocked down the superhuman Battlestar.

His raw physical power and fighting instinct are remarkable, and he’s an excellent team player with a clear head.

Larry is a particularly tough gang member from Los Angeles South Central. He has been for years a friend of Raul Quentino (then known under his street name G-Wiz), and they ran together in Crenshaw.

Although they lost sight of each other while Quentino became a Silver Sable International employee, they found themselves on opposing sides in 1994. This is when the Justin Hammer-funded Latisha Arnold launched a full-scale invasion of Beverly Hill by a heavily-armed coalition of street gangs.

After Hammer learned that Silver Sable International had been paid to stop the gangbangers, he dispatched a team of super-villains to kill Sable. He also decided to leave Latisha’s sets to rot. Latisha and her men, including her lieutenant Larry, attempted to take down both the SSI troops and Hammer’s flunkies.

In the raging battle, Quentino defeated Larry due to his superior training. He then offered his old friend a chance to leave L.A.’s killing fields and do something with his incredible potential at SSI. Trusting his friend and knowing there was no future for him in South Central, Larry decided to side with Quentino.

Shortly after, Quentino body-blocked Larry out of incoming fire from Spymaster II. Larry survived unscathed, but Quentino was badly wounded and lost the use of his legs.

Quentino petitioned for Larry to become his replacement in the “A” team of Silver Sable International. He pointed out his homie’s formidable strength, reflexes and abilities as a team player. Silver Sable accepted Quentino’s suggestion to give Larry his second chance.

Larry started operating along with her and team members Battlestar, Chen, Powell and Crippler.

Larry has a “Black power” raised fist tattooed on the back of his bald head. This was part of his old gang’s colours.

Larry is definitely from the ’hood, and talks street. He’s very big on the more positive aspects of gang culture, such as giving respect to and backing up members of his set, no matter what.

He’s surprisingly efficient and disciplined despite his lack of formal training. Larry’s pretty much a born action hero and special warfare soldier.

“Dag, man ! These def specs let me see through the blackness !”

“I got your back, Powell ! Ain’t no way you endin’ up kabobbed.”

“Hey Quentino, you can’t fire that with one arm. Just tell me how this baby works, homie. Drop science on me and watch me go to work.” 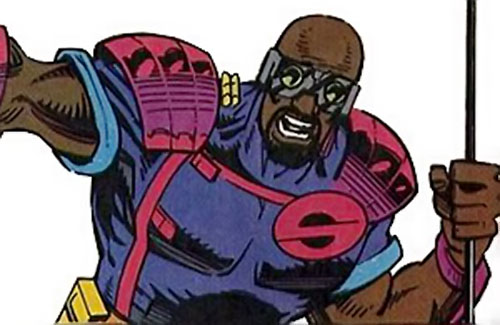