Due to the alien mishap, Laserfire has the ability to control light and fire.

High school student Larry Fredricks was returning home from a basketball game one night when he glimpsed a UFO! Getting a closer look, he saw what appeared to be an oval shaped metallic ship floating over Potter’s Field.

As he watched, it began giving off a brilliant light. Gathering his courage, Larry stepped foward to give a friendly greeting to the visitors on behalf of the human race.

Perhaps the alien crew on board had orders not to allow anyone to spot them. Or maybe the simple appearance of a human was enough to startle them. In either case, the ship roared off in a blazing spectacle of light. This light hit Larry and as the glow intensified, he watched himself burst into flames.

In fear and panic, he ran across the field to through himself into a stream. Though his clothing had been severely burned and he had been on fire, he had suffered no damage from the experience.

In time he had fully explored his heat/light powers. In school, Larry was not an academic success. He was no sports hero, but as Laserfire he could be important. He could stand for something. And why not ?

Laserfire wears a red and yellow costume and an odd visor over his eyes.

A bit cocky, Laserfire is one of the two characters to have a fan club in the Crusaders. He loves his powers and enjoys his membership in the group.

Bonuses and Limitations:
Flame Project and Flight are Contingent on Flame Being and can only be used while Flame Being is active (-2FC each). 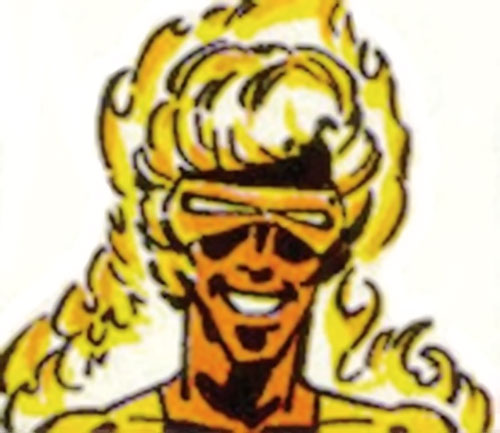