Lawbringer is a ghost with supernatural/psionic  powers. These allow him to animate the suit of power armour  he died in.

His desiccated corpse is still in the armour. After five years, it is pretty much mummified.

The armour was designed to powerfully amplify movements, and has a built-in force shield and enhanced self-repair facilities. The weaponry includes a pair of shoulder-mounted ion cannons, and a mini-missile rack on the left forearm.

The Genesis Knights were a war effort in fielding power armour suits. After the war, they turned to law enforcement.

Trenton Reese was one such Knight. But he was killed inside his armour by a spell. Yet he refused to pass on and clung to the material plane as a ghost. He took possession of his own power armour, rose from the dead and killed his killer.

Reese’s ghost continues his quest for vengeance and justice. He does not seem to be fading from the world of the living.

Reese is not as rational as he used to. The group of bounty hunters he belongs to, the Posse, has hunted and killed Genesis Knights wanted by the underworld without a reaction from him.

It is quite possible that the magical sword Lore is somehow controlling the ghost.

Magic and science do not watch well in the DCU. But Lawbringer could be a former bodyguard for Wotan who went rogue after his death.

By Sébastien Andrivet from a Kevin Long writeup for Cosmic Enforcers. 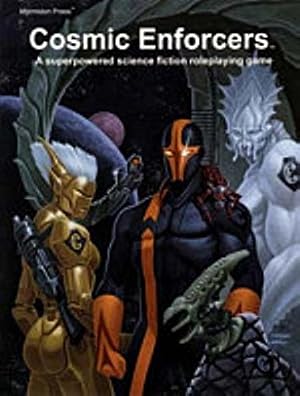