Enormously powerful, Qztr has destroyed entire cities with a mere gesture. Yet in regular combat doesn’t use such devastating attacks. What was seen in battle:

When the godlike Charon decided his emotions were controlling his actions too much, he expelled them. This created small army of demigods, the Lawbringers. These were completely obedient to him, and served to establish his Negation Empire. 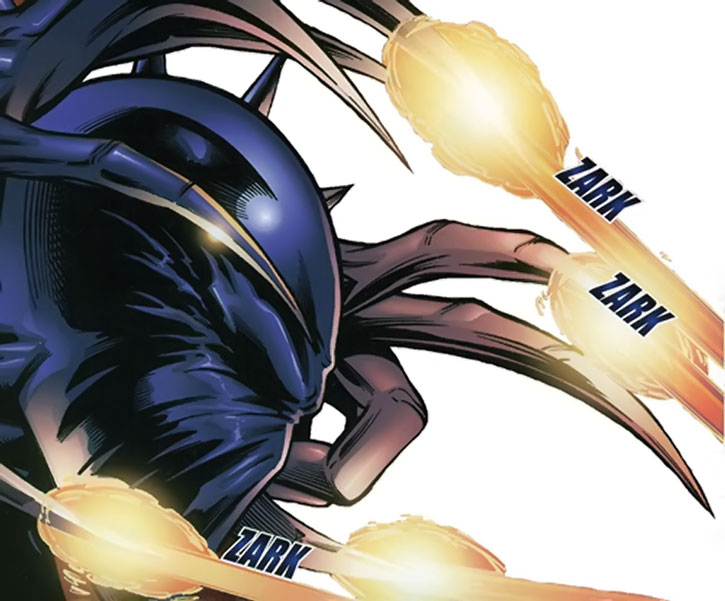 However, the Lawbringers’ overzealousness in conquest often left few alive to join the Empire. So Charon formed his military, and kept the Lawbringers as weapons of last resort.

Qztr enthusiastically served the Emperor for close to 10,000 years.

Then, Qztr heard that a being of a similar power level to Lawbringers was among a group of prisoners. These had been abducted from the Bright Universe, in preparation for an invasion.

When some of the prisoners escaped, Qztr decided to take a hand in the hunt. He confronted them on a desolate planet where they’d set down. The Lawbringer had little trouble handling them, as those with powers had trouble adjusting to the energies of the Negation Universe. Thus, even Evinlea couldn’t fully handle him. 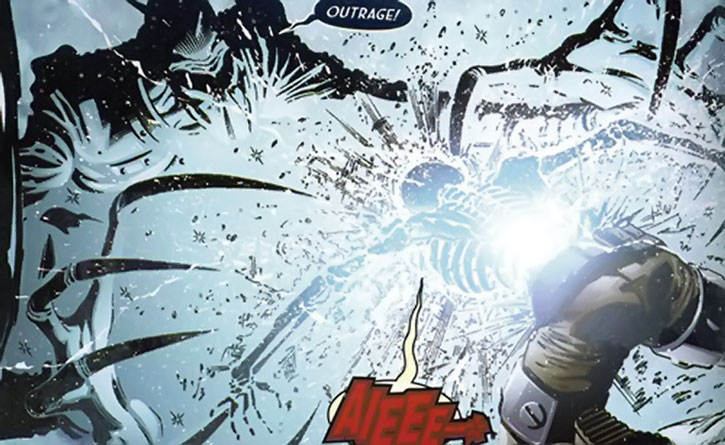 Qztr killed a number of them, including, apparently, Javi. But he was astounded when the baby Memi survived one of his blasts unscathed. Considering this of more importance, he took the child, transporting it immediately to Charon. Charon put the child through a number of tests. These found that Memi was completely invulnerable to all forms of damage.

It wasn’t long before the escapees arrived. They had allied with the Australians who sought to free Charon’s other guest, the Atlantean Gammid.

Former prisoner Kaine rammed his craft into the throne chamber after blasting Charon through the chest. Qztr flew into a rage, teleporting Kaine, Komptin, the former warden of the prison who’d been hunting them, and Komptin’s dog, Gullit, to the quarantined planet Karakorum. Charon admonished him for this, but wasn’t especially bothered. 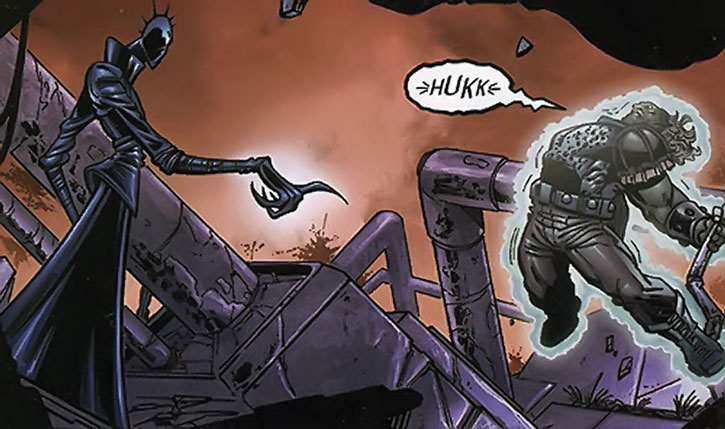 Qztr was as shocked as his brethren when their sister Lkqr was killed by one of the escapees. He also worried when Charon created Sigils for some of his subjects, concerned that these were intended to replace Lawbringers.

When the invasion of the Bright Universe began, Qztr joined his siblings and Evinlea, now Charon’s consort, in attacking the First, her kinsmen, on their home planet.

He has been known to instantly destroy entire cities at the slightest provocation.

He appears desperate for Charon’s approval. Qztr thus took an instant dislike to Charon’s Sigil-bearers, viewing them as potential replacements.

“You’re a vicious little cur, Komptin. I respect vicious. Just don’t get in the hang of lying to me.”

“I was birthed to punish the faithless and test the mighty. If you are mundane, then you are just clutter.”

Qztr: “But, father— ! Throwing our own flagship at the Throneworld ! The… the insult is unendurable !”
Charon: “Try to remember to whom you speak. I am beyond insult. What do I care what my subjects think of me ? If I desired it, could I not snuff out every life in the realm ?”
Qztr: “…”
Charon: “Qztr…?”
Qztr: “…yes, father. Forgive me. The thought of actually doing such a thing… it’s… it’s intoxicating.”

[After Kaine shoots Charon] “INFIDEL ! Architect of blasphemy ! Anti-god ! Your punishment will be unsurpassed ! Your suffering will be legend !”

“‘Murderer’ scarcely begins to describe me. There is no language dark enough to describe what we are.”