Layla enjoys an undefined degree of superhuman strength and toughness. She can exist unprotected in hard vacuum.

She’s a competent law enforcement and paramilitary officer from the L.E.G.I.O.N.. Layla was placed on the fast track to become an elite operative and leader.

From what little has been seen, Layla is not just strong. She’s agile, fast and a redoubtable fighter. Her speed may have been enhanced along with her brawn.

The strength and durability levels given in our game stats are conservative. She might be even stronger, but there’s no way to tell.

Layla was part of the original L.E.G.I.O.N., the mercenary outer space law enforcement agency built by Vril Dox during the 1990s.

Dox considered her to be one of the best young operatives recruited by L.E.G.I.O.N.. As a result, he started assigning her to special missions to test her mettle. He even considered moving her to the core team along with such operatives as Strata, Phase, Lobo, Stealth, Garv, etc.

One such special mission was to investigate a strange rift, and the object that had emerged from it. Dox added Lobo to her team to see if she could handle him, and sent them off. While officer Layla could indeed handle Lobo (though she had to knee him in the testicles within seconds of meeting him to stop his inappropriate advances), the mission was a disaster.

The L.E.G.I.O.N. operatives ran into powerful alien parasites. Almost everybody was killed by the monsters. Only the sheer power of Lobo saved Layla, and even Lobo had to flee.

Nevertheless, L.E.G.I.O.N. immediately redeployed her. Along with the core team and a support section, she was to investigate the origin of the parasites. Layla didn’t seem hampered by her amnesia and appeared to retained all of her skills, such as piloting starships or L.E.G.I.O.N. procedures. Presumably L.E.G.I.O.N. doctors quickly fixed the worst of her condition.

The L.E.G.I.O.N. sealed off the universe from which the parasites were coming, though a handful managed to reach Earth. As to Layla, she continued to work as a L.E.G.I.ON. officer, but did not join the core team.

Since her performance had been good in the face of overwhelming odds, one imagines that it was tied to her amnesia. Perhaps she needed to be re-trained and to re-familiarise herself with her life.

A few months later, Lyrl — the one-year-old son of Vril Dox and Stealth — took over L.E.G.I.O.N. using his mind control powers. L.E.G.I.O.N. became a tool of oppression, and Layla left to become a bounty hunter.

She briefly met Lobo again when she took down terrorists-for-hire Dick and Jane Kominski at a beauty pageant. Layla had entered as a contestant for expediency’s sake.

Layla was next seen serving Lyrl Dox’s evil L.E.G.I.O.N.. A mind control wave had been sweeping several systems, and she likely was caught in it and forced to rejoin. But this did not last long. Vril Dox and his allies soon broke Lyrl Dox’s reign.

Layla has not been seen since to our knowledge.

Even as a junior officer, Layla was obviously immune to uniform regulations.

Layla has textbook iron nerves. Thus, she’s largely unflappable, doesn’t scare, and considers opponents and setbacks exactly as they are, without any psychological impact on her assessment. Even Lobo did not impress her much since she knew that he wouldn’t go against Dox’s orders and thus wasn’t, from a factual point of view, a threat.

Layla has few appearances, leaving most stats on the speculative side of the mohawk. Like with other poorly-documented New Blood characters, stock stats are plugged in whenever there’s not enough material to assess.

Layla once used her pendant to hypnotise Lobo and keep him mesmerised. What happened is unclear and it was never used or mentioned again.

Layla used to have Benefit 1 (L.E.G.I.O.N. officer) and a few more points in Equipment back when she was with that organisation. 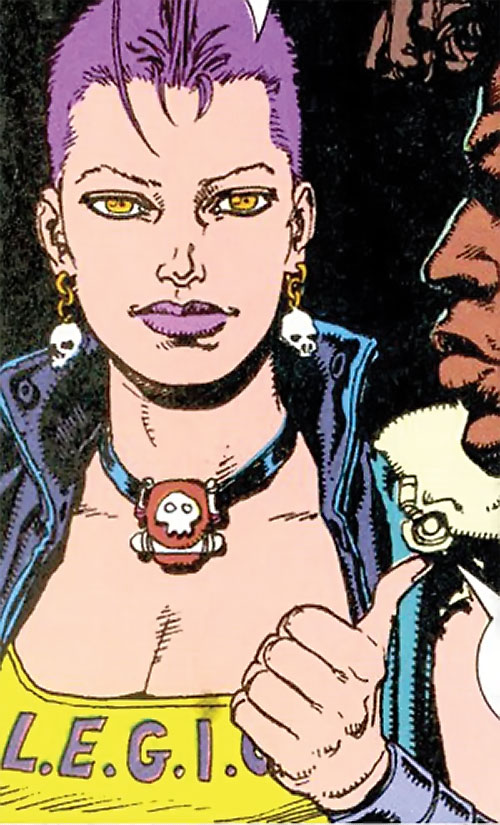 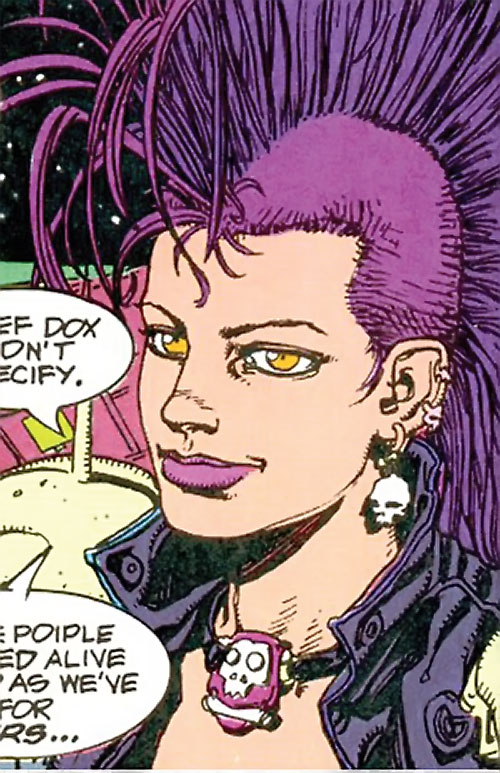 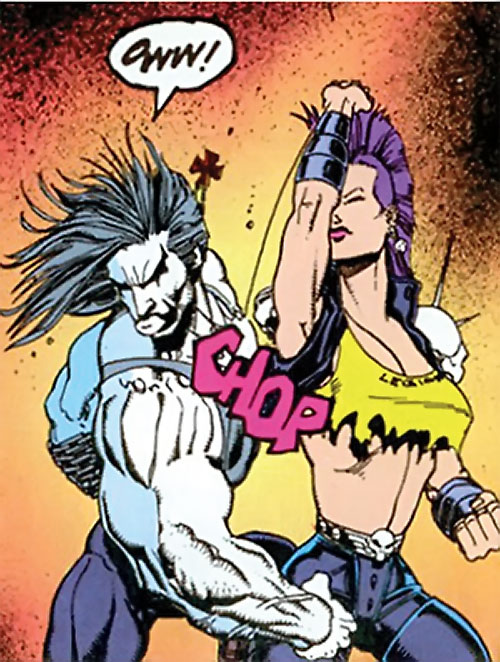 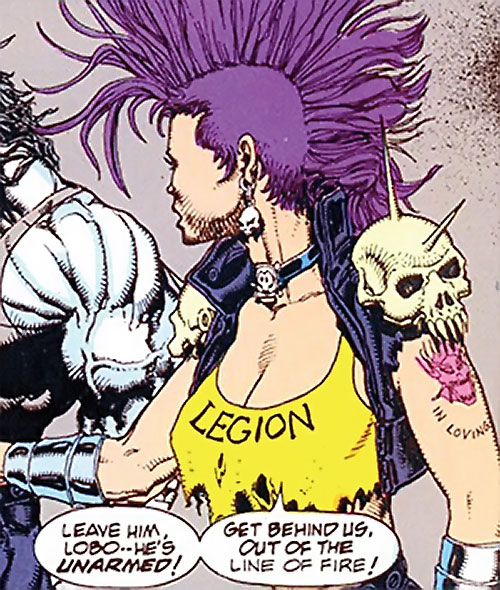