For a number of reasons the event almost entirely fizzled, with the possible exception of Genis-Vell. But that leaves us with a gallery of obscure characters, some of whom are okay-ish.

Lazarus has powerful telekinetic abilities. These manifest has bundles of red, glowing “cables” with which he manipulates things. He can destroy entire buildings and lift heavy structures.

He prefers to handle non-organic matter, so he will use tactics such as :

He has no problem with holding his opponents in mid-air (those who have no ranged attacks are thus incapacitated) or throwing them far, far away if they’re not much of a threat.

Lazarus’ nature is unclear. Apparently people saw him die and saw his corpse, so comic books tropes say he actually died and came back to life. Lazarus bled from his wounds, and his ungloved hand was recognized by his dogs, so he apparently has his living, original body.

In DC Heroes terms he probably gained Invulnerability at an unknown level as well as his TK when he died. Or more likely he always had them and never realized it. This Invulnerability would probably be a 10, which is the level of his TK on flesh.

Lazarus has been described as “a cripple” before his death, but it is unclear which physical handicap he had. In any case, he had full mobility as Lazarus. The Hulk also probably took out his eyes at one point, and he seemed to have two functioning eyes in the next story.

Regeneration, with the ability to regenerate large tissue masses, therefore seems to be likely. Presumably also with a maximum of 10 APs (I’d say 07 as a wild guess).

If the tentacled/coral-like growths on his back are any indication of what the rest of his body looks like and not some kind of ornament, he definitely has Strange Appearance in DC Heroes terms. His right hand seemed normal enough, though.

Todd Hunter had a physical handicap, perhaps after some sort of accident. He was also apparently the head of a business called Hunter Tech.

His wife grew to hate him due to his condition. Hating her life, she became the lover of an ambitious man named Cameron. They arranged for the death of Hunter in the explosion of his mansion, and Cameron became the head of Hunter Tech.

However Hunter came back, wearing full body armor and a mask, and wielding strong telekinetic powers. He sabotaged Hunter Tech in increasingly unsubtle ways. This eventually drew the attention of the Pantheon, and thus the Hulk’s.

Pantheon personnel attempted to trap Hunter, who know called himself Lazarus. Lazarus abandoned his plan of slowly tearing Hunter Tech apart, and instead confronted Cameron and his widow directly. The Hulk interfered, badly hurting Lazarus. Cameron was killed during the struggle, and Hulk left Rosalind Hunter to confess everything to the police.

Lazarus was latter seen protecting his no-good, money-leeching son against underworld enforcers. The Hulk again intervened, but Lazarus successfully delayed him. Lazarus ended up hitting his pathetic, money-grubbing son then flew away.

His eyes are still recognisable through the green plastic of the eyeslits as those of Todd Hunter, for those who knew him.

Lazarus was consumed by his thirst for revenge (breaking Cameron and punishing his ex-wife), as well as checking up on his son. It is unclear if he still has other, unsolved issues. If he does he will certainly attempt to settle them. If not, Lazarus’ deeper motivation may come to the fore.

Lazarus comes across as a confident, cold man, used to being in power. He thinks he’s even more powerful than he actually is, and will utter dire threats against those who dare to stand against him. However, at first, he’ll mostly try to intimidate and hurt but not kill.

He’s quite smart and resourceful, and will use his enemy’s weaknesses against them (say, a sense of morality or duty).

“[Fighting you] would only humiliate you and bore me.”

Like most of the ’93 annuals characters, nothing was ever done with Lazarus. But he remains a working, powerful character and a bit of an enigma. So I suppose some GMs will want to reuse him in their campaign and build from what is known of him – or keep him as mysterious as Peter David did in the Hulk annual.

A possible scenario is to have Todd Hunter accidentally killed by the Player Characters , and come back as Lazarus to avenge himself. 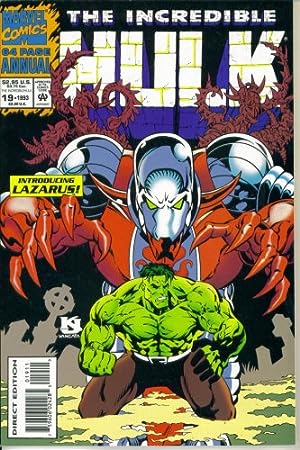