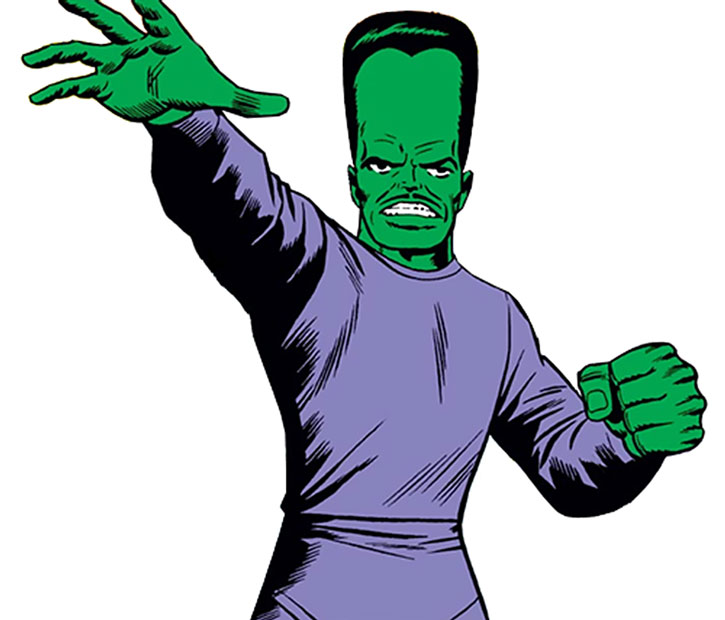 For some reason, the Leader also possesses the ability to put people under his mental control once he has touched them. But this ability does not work on gamma mutates , such as the Hulk and Abomination. This is a problem he has overcome by the use of devices.

Furthermore, he gets access to more physical skills, such as acrobatics and martial arts, as well as some musical skill from his permanent mental link to Rick Jones.

Samuel Stern, the Leader, is a small green skinned man with an overdeveloped, largely expanded skull. The Leader is not very muscular, but keeps himself in form. His skull and brain are extended upwards the size of five normal skull volumes.

All his features are emerald green including a moustache, his small eyebrows and his eyes. His hair, cut like Spock’s, is of a darkly green tone. He usually wears an orange bodysuit with yellow or blue boots and gloves as well as a belt. 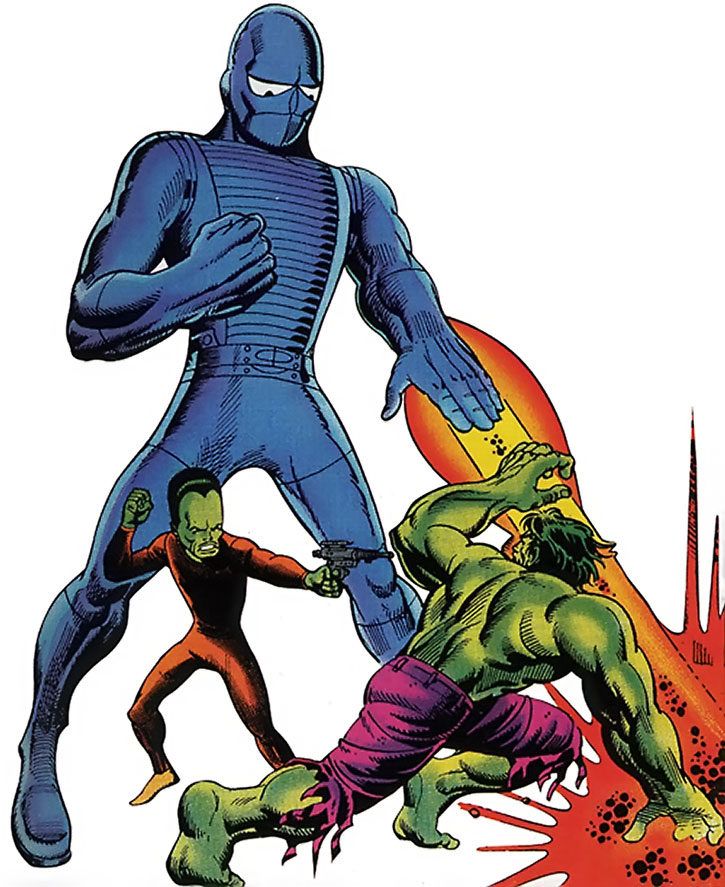 The Leader is one of the most brilliant minds on the planet with a huge self-image to boot. He is condescending towards anyone who does not match his gamma-spawned abilities. His goals are twofold:

The Leader’s super-developed brain is his chief gamma-radiation mutation. His logic is always sound, and his hunches are usually on target. His plans are always extremely complex with many fail safes and alternatives. He has total recall of anything he has ever seen or read.

The Leader is a technological genius who specializes in gamma radiation. He has invented several robots, weapons, and other equipment to facilitate his conquest of the planet. Since he gained his mind controlling powers, he has spent fewer of his resources on robots and more on specialized armor for minions. These include Rock, Redeemer and Half-life as well as a multitude of gamma-spawned monsters.

He also has developed Omnivac, a sentient computer that maintains the Leader’s current base of operations. He invented a teleportation pad, with a global range. The Leader is also a superb tactician and his mind, like a chess grandmaster’s, foresees the consequences of his schemes and plans on a large scale. 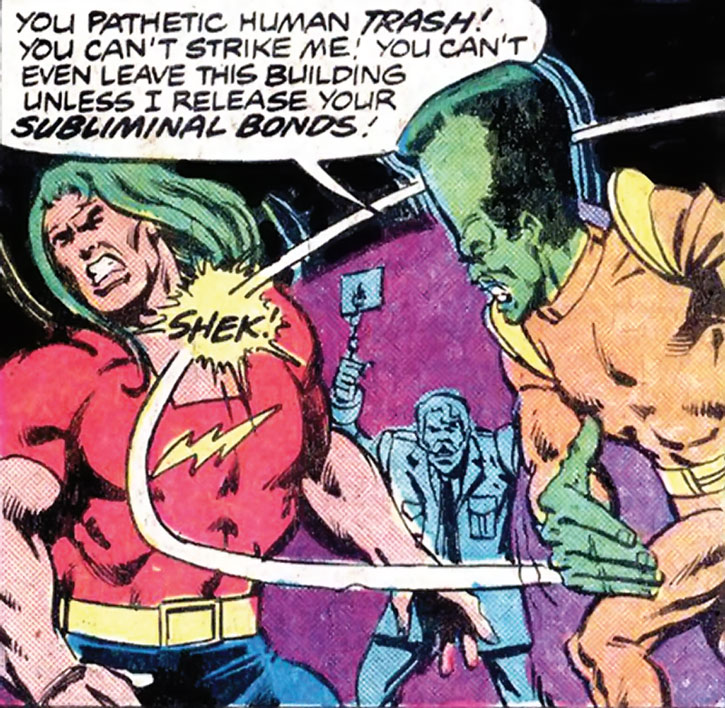 The Leader has a mental connection to Rick Jones whose knowledge he has access to. Since the Leader feels Jones’ emotions Jones’ well-being is of certain concern for the Leader who will sometimes take action if necessary.

Mainly the Leader is a power hungry and vengeful extremely bright would-be conqueror of the entire world manipulating all and stopping at nothing.

The Leader’s most serious weaknesses are his immaturity and impatience. Several times his malevolent selfishness has caused him to lose sight of necessary precautions, or he has acted prematurely, causing the ruin of his schemes.

Lately his egotism has led him to embark on mad, impractical schemes to turn the rest of humanity into green-skinned beings like himself.

Hulk: “Rrrarrrgh ! Hulk beat big head into ground ! Hulk catch Big Head and smash !”
Leader: “Catch me, catch me, if you can, but you can’t catch me cause I’m ahead of you again !”

“Ha, ha, ha ! It’s true ! Bruce Banner is no longer the Hulk ! Now there is no one to stop my plans for world domination ! And once my master plan is set into motion, not even the Avengers or the scattered members of the Fantastic Four will be able to stop me !”

“None suspect my true intention ! With the Hulk now powerless — soon the entire base will be mine ! And that means America’s mightiest missile will be under the Leader’s control ! Missiles which I shall use — to start World War Three !!” (long rant by himself follows)

“Again you have grievously miscalculated ! Though I seem weaponless — I am far from helpless — as the use of my mental force field will now easily demonstrate ! A pity you will not remain conscious long enough to savor the sight !”

Perhaps Stern was working for a STAR Labs facility when the accident happened. He could now be the rival of Lex Luthor himself in his criminal plans. His old nemesis, the Hulk, is necessary for keeping the Leader alert, paranoid and forward.

The Leader’s Arsenal of Weapons and Paraphernalia

The Leader has devised a large array of technologically advanced weaponry and computer systems to help him with his criminal activities. He has developed a means for telepathically controlling the Hulk and the Rhino. One example of the Leader’s work was the construction of a robot programmed to bring the Leader back to life in the event of his death.

The Leader’s greatest achievement in the field of computers is his design and construction of the highly advanced and complex computer system called Omnivac, which controls the orbiting space station that the Leader has used as a base of operations.

The Leader has developed an army of varied so-called “humanoids,” which are actually robots constructed from unusually tough plastics. They have versatile programed capacities to enable them to perform any task. These robots, however, have little if any capacity for independent thought.

These robots’ bodies have extraordinary elasticity, enabling them to absorb impacts or to stretch harmlessly with them. These “humanoids” have served the Leader throughout his career of attempted world domination. 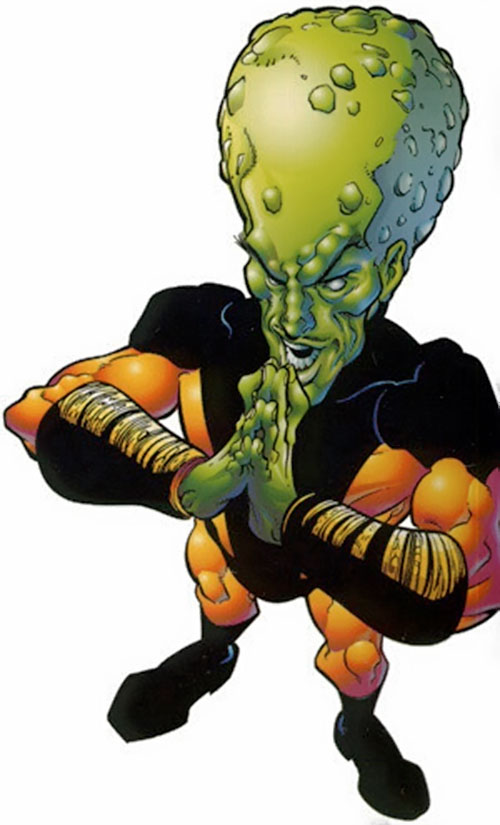 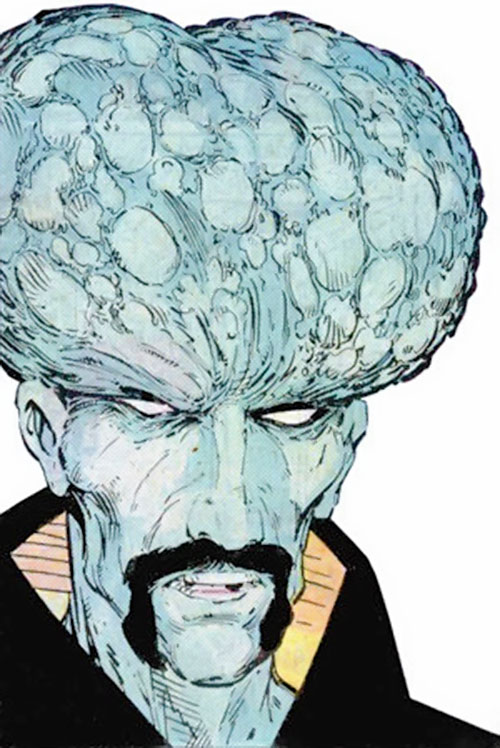 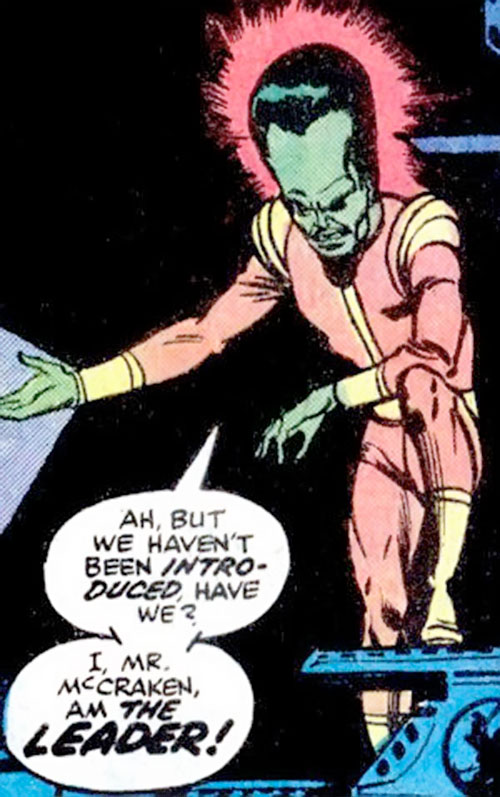 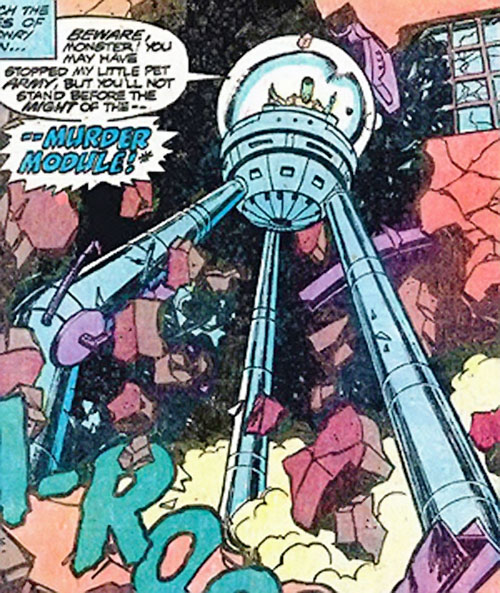 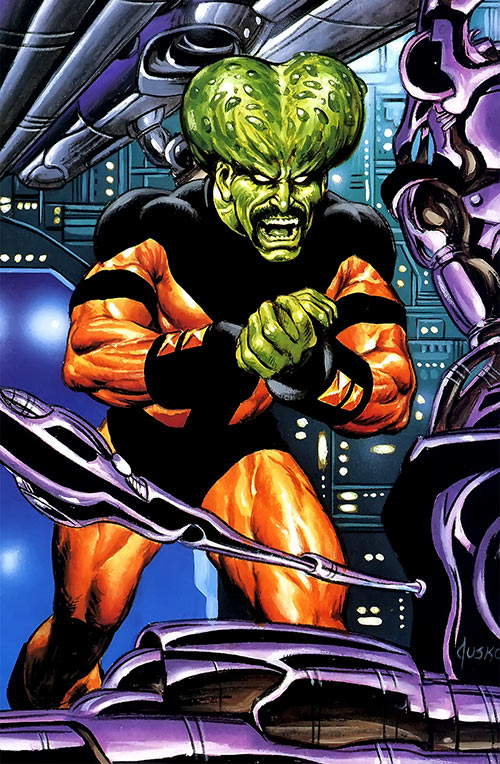