During the various movies, Leatherface always appear along with a thoroughly degenerated family – usually a twisted father figure and an even more psychotic brother. Those are not the same persons from movie to movie, and are usually killed.

There’s a significant possibility that it is in fact Leatherface that *creates* those families for him. A working hypothesis is, in DC Heroes terms, Spiritual drain: 04 (Does not gain APs of SPI) as Killing Combat. Once the SPI of his victim is reduced to 0 they will conform to Leatherface’s sick expectations of a family and become their assigned archetype.

In the years before his family went totally off the deep end, Leatherface worked in a slaughterhouse, swinging a sledgehammer to kill cattle. With the advent of air-pressure guns, however, Leatherface and his family found themselves out of work.

After some time, Leatherface’s family began practicing cannibalism and other strange practices. They began raiding graveyards, desecrating corpses, and murdering highway travelers. They used the flesh of the murdered to make barbecue and used the bones for decorative purposes (furniture, wind chimes, etc).

Situations have happened when, during attacks on groups a highway travelers, carnage ensued and Leatherface’s family has been killed. He has always found —: or made — new cannibalistic families in the middle of nowhere to start the cycle again.

Leatherface is a tall, fat male who wears dirty, greasy workman’s clothes and a mask made of human skin turned inside-out. He’s got really nasty yellow teeth. He switches between masks, depending upon the role he is expected to play.

Leatherface is an angry gimp. He has the mind of a 5 year-old in the body of a 45 year-old. He is deathly afraid of the father figure of whatever movie he’s in (cowering in corner, away from blows), but has a great time chopping up teenagers (he isn’t intimidated at all).

Other than that, he’s got no personality to speak of.

By Brian Young and Sébastien Andrivet. 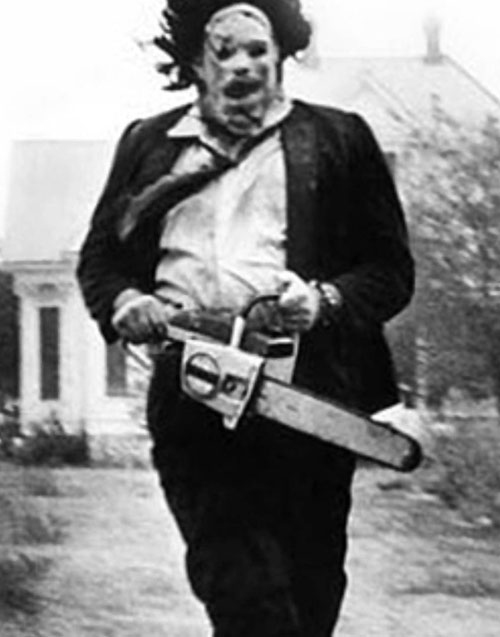 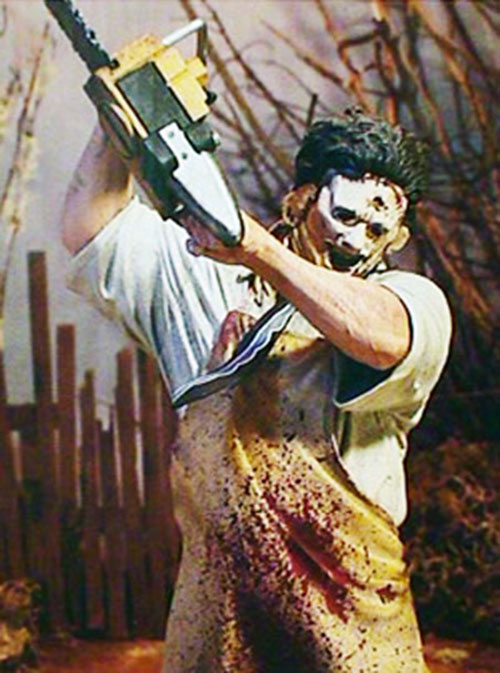