Ralph G. Fake can transform himself at will into the high-flying “monster eagle” called Legal Eagle. That’s about it.

He appeared in “Spider-Man in: Legal Eagle”. Which was in Avengers #165, among other places.

Spider-Man and Mary Jane are in Washington D.C., witnessing Legal Eagle’s theft of the Bill of Rights . MJ exclaims, “Look, Spidey ! It’s Ralph G. Fake, the criminal lawyer with the power to change himself into Legal Eagle, the monster eagle at will !”. How she knows so much about Fake’s alter ego, I have no idea.

Anyway, Spidey points out that stealing the Bill is “criminal” which allows the Eagle to retort, “Stealing the Rights ? Wrong ! I’m destroying them ! You soft, humanitarian spider !”.

Spider-Man’s spider-sense tells him that the Legal Eagle is after the President’s seat next, so he leaves a web-net full of Hostess™ Cupcakes in the Eagle’s flight path.

Unable to resist the moist devil’s food cake, Fake is hauled away by a cop. Spidey asks, “Is there anything genuine about you, Fake ?”, to which he replies: “Yes, only one thing — my love for luscious Hostess Cupcakes with fudgy icing.”

In 2009, Legal Eagle was seen in the S-Wing of an unspecified New York prison. He still presented himself as a lawyer, but it was pointed out he had been disbarred back in the 1970s. He briefly participated in an accidental breakout, but everybody was brought down using sedation foam.

As Fake, he’s kind of a scrawny, weasely-looking type, with short brown hair, sideburns (it was the ’70’s), and a bird-like hook nose.

As Legal Eagle, he’s bald, with pointy ears, and the same bird-nose. His body is sort of griffin-like, green and feathered.

Legal Eagle wants to take over the judicial system, getting his “style of criminal law to rule the land”. He wants power on a large scale, even going so far as to covet the job of President of the United States. 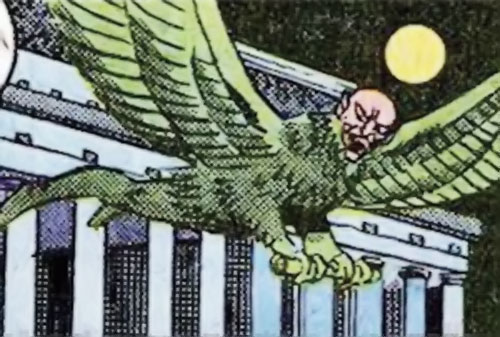 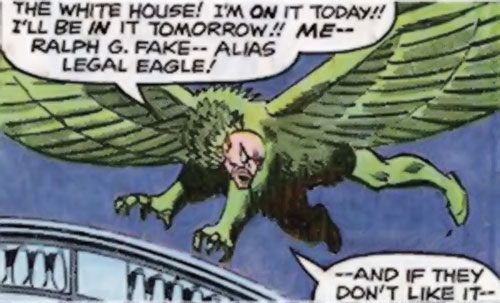