The Legion of Super-Heroes is DC’s far future heroic space youth team. It started at the dawn of the Silver Age  in 1958, and this version of the LSH lasted until 1994.

This writeup contains the basic personal equipment used by this Legion. It also has notes about the use of similar technologies by other 30th century agencies and by the general public.

Some possibly apocryphal sources claim that wearers of the Flight Ring can “link” together and travel at the speed of the fastest linked character, allowing them to keep up with characters with superspeed. If the GM uses this Advantage, which I do not recommend, characters would need to be within 0 APs of each other to link up.

The Flight Rings are a unique proprietary technology created by Brainiac 5, utilizing an anti-grav metal created by Mon-El. They are possessed by Active and Reserve Legionnaires, and by Legion Academy members. However, the Academy students only possess the rings for the duration of their studies.

Powered by the user’s will, the ring allows flight at supersonic speeds (Flight). Need and willpower can trigger a proportionate response from the ring, allowing even greater speeds for a short period of time (done by Pushing Flight).

Skilled and determined users can use the ring’s anti-grav field to lighten the force of gravity on objects they touch, allowing the lifting of great weights (Gravity Decrease). The homing device (Radio Communications – transmits an SOS and tracking beam) is activated by twisting the L symbol clockwise a quarter turn.

The ring can also receive signals – not so much spoken transmissions as pulses, like Morse code. The Legion probably uses its own code which all members are taught.

The earlier version is not as fast and powerful as this one. It also lacks the ’hovering‘ safety feature that keeps unconscious users from falling to the ground.

Some knockoffs of the earlier version of the Ring are in use by the Legion of Super-Villains. The most likely source for their possession of this technology is the early model ring worn by Nemesis Kid, when he infiltrated the Legion – it was never reclaimed when his treachery was exposed. The LSV probably has not bothered to install the Radio Communications tracking device in their copies of the rings.

Outside of Flight Rings, the Flying Belts – purchased for the LSH by R.J. Brande when the Legion was founded in 2973 – are considered the state-of-the-art in 30th century personal transport technology. Most people still rely on vehicles or the occasional jet-pack (which is just as fast and reliable, but more bulky).

The Flying Belts *are* available for purchase to the general public. They’re just expensive. Since public transport is readily available and can reach any corner of the globe in minutes, most people don’t bother.

The plug is a communication device. It operates by creating a telepathic transmission field, meaning the wearer need not be able to speak, simply to think what he or she wishes to convey. These thoughts are transmitted to other earplugs, and can also send and receive to other, more standard communications devices (Radio Communications).

The telepathic transmission can also operate on pure thought transmission alone with any sentient beings, whether they have an earplug or not. However, this has a much reduced range (Telepathy). The earplugs have universal translators built in as well.

Telepathic Earplugs are issued to all Active Legionnaires as a rule, and can be given to Reservists as well. Saturn Girl and Tellus wear the plugs but rely more on their own telepathic abilities. And Quislet, who has no ears, can use his voice projection unit to speak on the Earplug’s frequency.

Telepathic Earplugs are not available on the open market. Still, the Legion has made them available to the Science Police and other law enforcement agencies on a limited basis.

The general public makes use of a standard model throat mike/earplug radio transmitter which picks up the movements of the throat (for standard humanoids, at least) to transmit speech even in airless environments. These devices have Radio Communications: 03. LSV members are known to use them.

The transuit (also known by a variety of other names) was created by Brainiac 5 with some assistance from Element Lad’s transmutation power. Transuits attune themselves to the molecules of their wearer so they can survive hostile environments and use their superpowers unimpaired. The Transuit can filter oxygen from almost any atmosphere, as well as free-floating hydrogen atoms in a vacuum.

The suit is stored in a small ¾” by ¼” capsule and sewn into the Legionnaire’s clothing. Also stored in the capsule is a sensor which, upon exposure to a hostile environment, instantly releases the transuit. The suit expands and surrounds the wearer to provide protection.

Some Legionnaires – Tellus, Quislet, Mon-El, Supergirl, Superboy, Wildfire, and Dawnstar – do not use transuits. Brainiac 5 often uses his Force Field belt instead of the transuit, but he does have a suit capsule sewn into his clothing for emergency use. Transuits are also provided to all Legion Reservists.

Transuits of Legion quality are not available to the public, though the LSV has somehow pirated the technology. A less efficient model also patented by Brainiac 5 (Sealed Systems: 12, and lacking the instant expansion capability) is available to the Science Police, the UP Starfleet and Militia, and other law-enforcement or government agencies.

A third model (Sealed Systems: 11, lacking the instant expansion capability) is available to the general public. This third model is the version used by the LSH for most of its existence. The advanced version shown above, with instant expansion capability, only comes into use in 2984, just before the Great Darkness Saga. No doubt Brainiac 5 simply hadn’t bothered to invent them before.

Distorter [BODY 04, Chameleon: 07, Recall: 05, R#2 ; Limitations: Chameleon can only produce a disguise stored in the device’s memory. APs of Recall here refer not to APs of information stored, but to the number of images which can be stored].

The distorter functions by projecting a holographic disguise over the user. It reconfigurzq the Legionnaire’s appearance and clothing to whatever specifications the distorter has stored in its memory.

A generic disguise, one not duplicating any particular individual, can be programmed in, although not in the field. A distorter can also photograph someone and store their image for future use.

Note that because the illusion is a hologram rather than a mental or mystical illusion, some forms of True Sight may not be deceived by them. By the same token, the Legion deals with many sentient species who do not operate by sight, and such lifeforms may not be deceived at all (GM discretion in both cases).

Distorters are small 6” metal disks which the Legion uses for espionage and infiltration work. They are not part of a Legionnaire’s standard equipment, and are distributed only as needed for specific missions.

Legion quality equipment is not generally available to the public except where noted below; most of the equipment (Flight Rings, Earplugs, Transuits) required the Genius Advantage to create.

About Flight Rings: in the comics, the Flight Rings are powered by the user’s willpower. This is reflected in the writeup by half-linking Gravity Decrease to the wearer’s Will, and in the ability of the wearer to expend HPs in Pushing the ring’s Flight power.

Flight Rings also have an alarm which is signal only, but they can receive as well as transmit. BoH rules are in use here, so remember that Radio Communications already has +5 Range in addition to the +20 listed here, so the final range is 60 APs. Likewise, the range of the Telepathic Earplugs is 11 APs, not 6.

And of course, Sealed Systems last for a time equal to the APs of Power +4. You folks probably remember all that, but I’m still used to the DCH versions of those powers.

LSH headquarters during the Silver Age 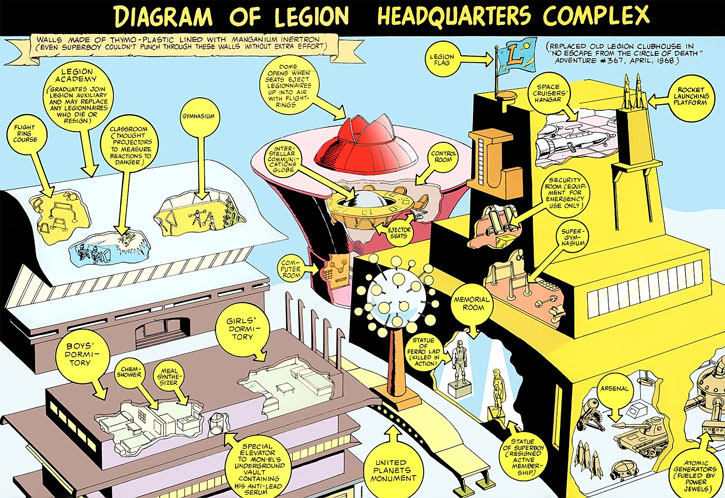 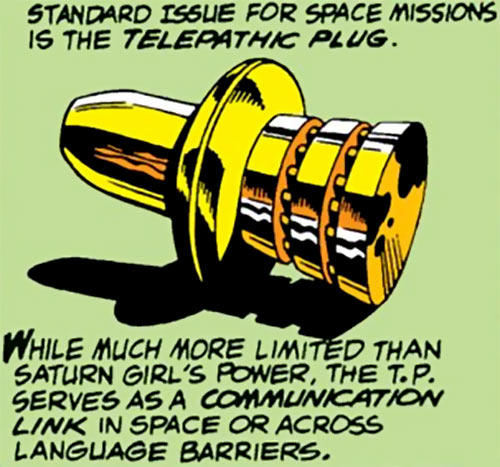 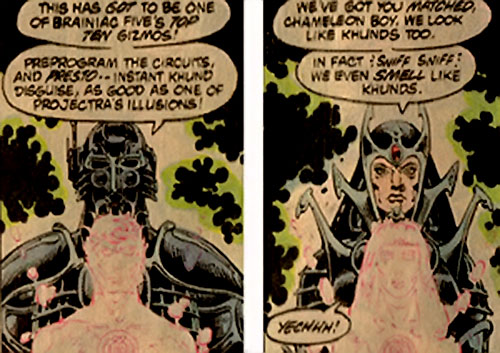