Other than the fact that he can drive like a maniac he doesn’t really have any useful skills. He’s often so high that he hallucinates and has no idea what he is doing.

He is also prone to spouting off some of the oddest American pop culture references to go along with his frequent hallucinations.

He was the get away driver who works for Mr. Chang’s Triads. He typically works with Shenhua on missions.

He once helped Revy and Shenhua rescue Rock from some terrorists, but was so high that instead of driving away from the enemy camp he drove through it.

The group managed to get away because of Revy and Shenhua’s superior combat skills, his driving skills, and the fact that the US military base that was the meeting point was only a few kilometers away.

Later Shenhua revealed that Leigharch over dosed and is now forced to stay at home with a live in nurse.

Leigharch is a stereotypical stoner who has little motivation to do much of anything unless he absolutely has to.

He is also prone to spouting off random bits of American popculture trivia to go along with his frequent hallucinations.

Again not much to go on other than the fact that he’s a lazy pothead that often hallucinates. He does seem to have an interest in Star Trek, Playboy magazine, and American pop music. Given the amount of insanely stupid stuff he does one wonders if he actually consciously realizes that he’s driving most of the time.

Revy (watching Leigharch get stoned and drive): “Not too much, you stupid fucking Irishman !”
Shenhua: “Don’t worry. He drive just fine with his brain blown to Mars.”

Revy: “Let’s go! Let’s go! The entire camp is after us!”
(Leigharch lazily razes his head.) “Awww, Shenhua do I really have to ?” 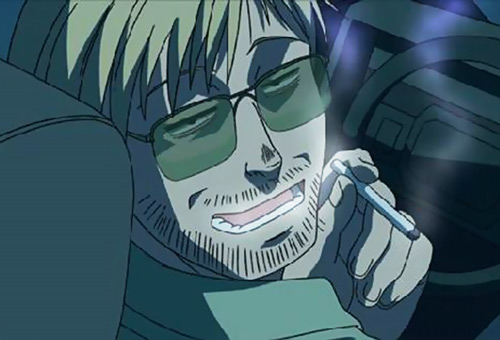