Lex Luthor’s younger sister Lena once accidentally ruined one of Lex’s childhood experiments. That was before he lost his hair.

Said experiment involved “some kind of space-brain that plunged into our atmosphere”. Lena touches the brain while Lex tries to decode the brain’s telepathic code, emitted in some weird form of energy. This causes the brain to become a pile of ashes as it shocks her. This experiment gave her super ESP powers.

Later, Lex lost his hair and became a famous supervillain, always battling Superboy. Thus, the family became disgraced and reviled. As a result, Lena and her parents left town and changed their last name to Thorul. Her folks also casually told Lena that her brother died in a mountaineering accident. However, Lena’s parents were soon killed in a car wreck.

Later, at a meeting of the Midvale High science club, a scientist, “Dr. Anton,” is testing the various students for ESP ability. Linda (Supergirl) Danvers purposely shows little talent, even though she could easily read the hidden cards with her X-Ray Vision.

Dr. Anton claims that Lena had the lowest score, even though it was plain to the audience that Lena had done quite well. Furthermore, Linda discovered via X-Ray Vision that Lena had gotten a perfect score. She assumes that he simply made a mistake.

Afterwards, the Danvers give Lena a ride home. She senses danger ahead, knowing that something is wrong with the bridge, a mile away. Scoffing, Mr. Danvers drives on, only to discover that Lena was right. Thankfully, Supergirl fixes the collapsing bridge.

Linda learns that the FBI rejected Lena’s application. As Supergirl, she learns why: Lena is a girl without a past, and is therefore untrustable. Supergirl then flies into the past to learn Lena’s history. At the site of the accident which killed Lena’s parents, Supergirl deduces that Lena’s parents were really the parents of Lex Luthor!

Journeying further into the past, Supergirl coincidentally happens to see Lena’s “origin”. Then Linda journeys back to the present (1962), and tells the FBI, who are definitely not about to hire Lex friggin’ Luthor’s sister !

Meanwhile, Dr. Anton is paying a call on Lena. Dr. Anton asks Lena to join him in his criminal organization, the Bank Busters.

And elsewhere, Lex Luthor has built a radio. This is despite the guards not letting him have a radio, since gods only know what he would be able to make out of a radio. Lex uses it to keep tabs on crime broadcasts specifically broadcast to him by his gang.

He learns that his sister is about to join the Bank Busters in cracking the Midvale National Bank. Luthor panics and demands that the warden contact Supergirl. Sometime later, Luthor tells Supergirl all about his sister and her planned crime.

Supergirl then flies back to Midvale, where she sees the Bank Busters robbing the bank. Lena, wearing a skimpy domino mask, reads the mind of a bank employee in order to get the combination to the vault. She then tells the other Bank Busters to push a button that will supposedly open a drawer full of money.

But really emits tear gas. Lena knew about this trap after having read the bank employee’s mind. This enables the cops (with help from Supergirl) to capture the crooks.

Later Lena explains: “You see, I wanted to join the FBI, but they rejected me! I was hoping that if I helped trap this gang, I could get the FBI to reconsider my application!”.

This story ends with Lena noticing that Supergirl is thinking of Linda Danvers, but Lena doesn’t know why.

The next Lena story involves a costume party, in which everyone dresses as their favorite hero. Most people choose historical figures. But Dick Malverne (Linda’s boyfriend who suspects Linda of being Supergirl) dresses as Superman, while Lena just happens to choose to dress as Supergirl. (Linda dresses as Pocahontas ).

The costume party is attacked by two crooks dressed as astronauts. They fill the place with gas. Supergirl beats up the crooks, but then reverts to being Linda and pretends to be asleep like everyone else. As it would happen, Lena is the first to wake up. She makes sure that the crooks are securely tied up.

But this causes Dick to obsess with the idea that Lena must really be Supergirl.

After pestering Lena incessantly, with contrived coincidences not helping her, finally Lena gives in and says, “All right, there’s no use denying it! I suppose I’d better admit I’m Supergirl !” Supergirl overhears and is bothered by this lie ; perhaps, she thinks, Lena is becoming a criminal like her brother !

The next Lena story is to provide a convoluted and contrived explanation for this lie, in order to vindicate Lena. After all, only a criminal would have any reason to lie!

Apparently, Lesla-Lar (“the girl science criminal” of the bottle city of Kandor) escaped from prison. She decided to get revenge on Supergirl by taking control of Lena’s mind with a “thought control machine,” and forcing Lena to admit to being Supergirl! Mwahahaha! But wait, this evil scheme is just beginning!

Lesla then uses a ray to teleport (and shrink) Lena, causing Lena to appear in Lesla’s Kandorian lab. Then Lesla uses a “brain-washing helmet” to erase Lena’s memories and replace them with some of Lesla’s, so that Lena will believe that she is Lesla.

Then Lesla switches clothes with Lena, teleports to Lena’s home, and activates an “anti-monitor bomb”. It causes all communications between Kandor and Earth to be cut off. Furthermore, the cork in Kandor’s bottle has been sealed to prevent the Kandorians from communicating with Superman or Supergirl.

Later, Supergirl confronts “Lena” (now Lesla in disguise) about her comment to Dick. ”Lena” says that it was a slip of the tongue; she meant to say that she had super-powers. ”Lena” then demonstrates her vast array of Kryptonian powers.

Lesla/Lena gives a contrived explanation for how she got this set of powers, and explains that she wants to fight crime. Supergirl decides to talk about this with Superman, leaving Lesla alone.

Lesla dons a super-uniform and builds a “trans-dimensional  lens”. It takes her to a lonely island, where she talks to the Phantom Zone criminals. She eventually chooses three to set free (General Zod, Jax-Ur, and Kru-El), narrowly managing to avoid releasing Mon-El. Doing so, however, has exhausted the power of the Lens.

Kru-El streaks off to find a box of his Forbidden Weapons from Krypton. This crate had landed on Earth in an earlier story. Kru-El uses one such weapon (a “force-beam”) to create a super force field around the planet. It prevents anyone from penetrating the time barrier from the past or the future. The goal here is to prevent the Legion of Super-Heroes from showing up.

Kru-El then discovers a damaged disintegrator gun. Unsure whether it would affect super-powered Kryptonians, the villains draw straws to see whom they will test the gun on. Lesla loses and is disintegrated. The weapon then conks out and can never be used again.

Keep it a secret

Further complications ensue, needless to say. Lori Lemaris gets involved, as does Lex Luthor, given Kryptonian powers by the Phantom Zone Villains. Eventually, Supergirl manages to defeat the villains, sending them back to the Phantom Zone. The one exception is Luthor who loses his powers and goes back to prison.

Lena, though trapped in Kandor for days, is fine. Furthermore, we learn that Lesla’s device failed to wipe out her memory. And, Superman thinks, thanks to the blackout, Lena never discovered that she is Luthor’s sister.

She’s a blonde-haired student. She is also apparently a Lesla-Lar look-a-like.

She is an ordinary person, trying to use her talents for the benefit of others.

“I wanted to devote my talents to the LAW, but the FBI turned me down ! Very well, then, I’ll go where I’m appreciated ! I’ll join the UNDERWORLD !”

Advantages:
Secret Assistant (Supergirl), Misc: Lex Luthor knows that she is his sister, and will do anything to keep her safe and/or to keep her from falling into a life of crime, all while keeping their relationship a secret, so as not to traumatize her. 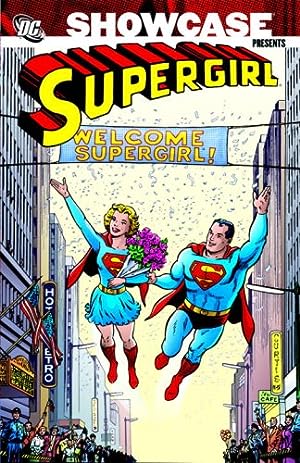 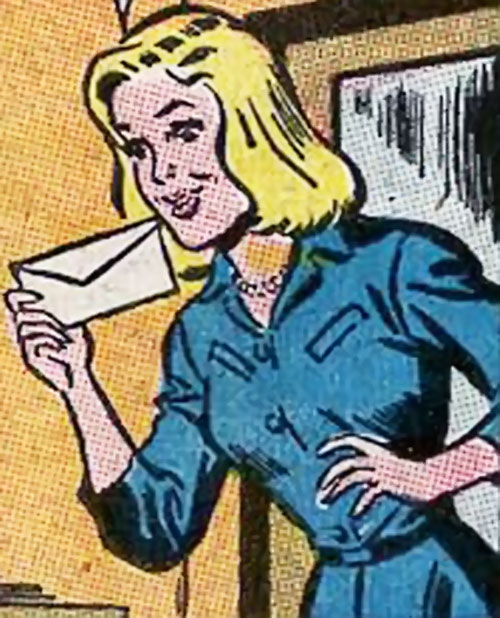 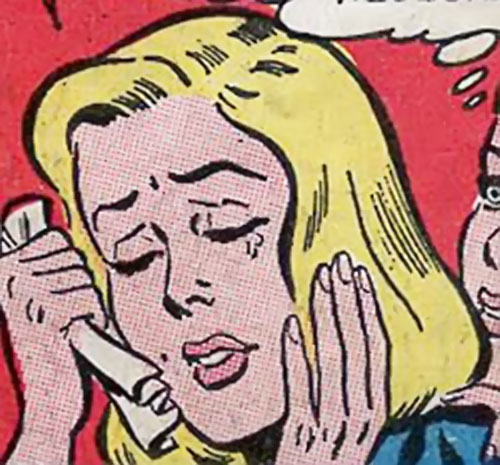 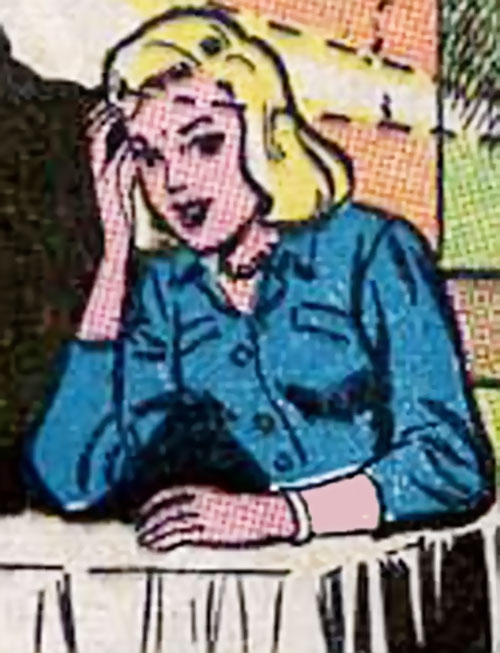